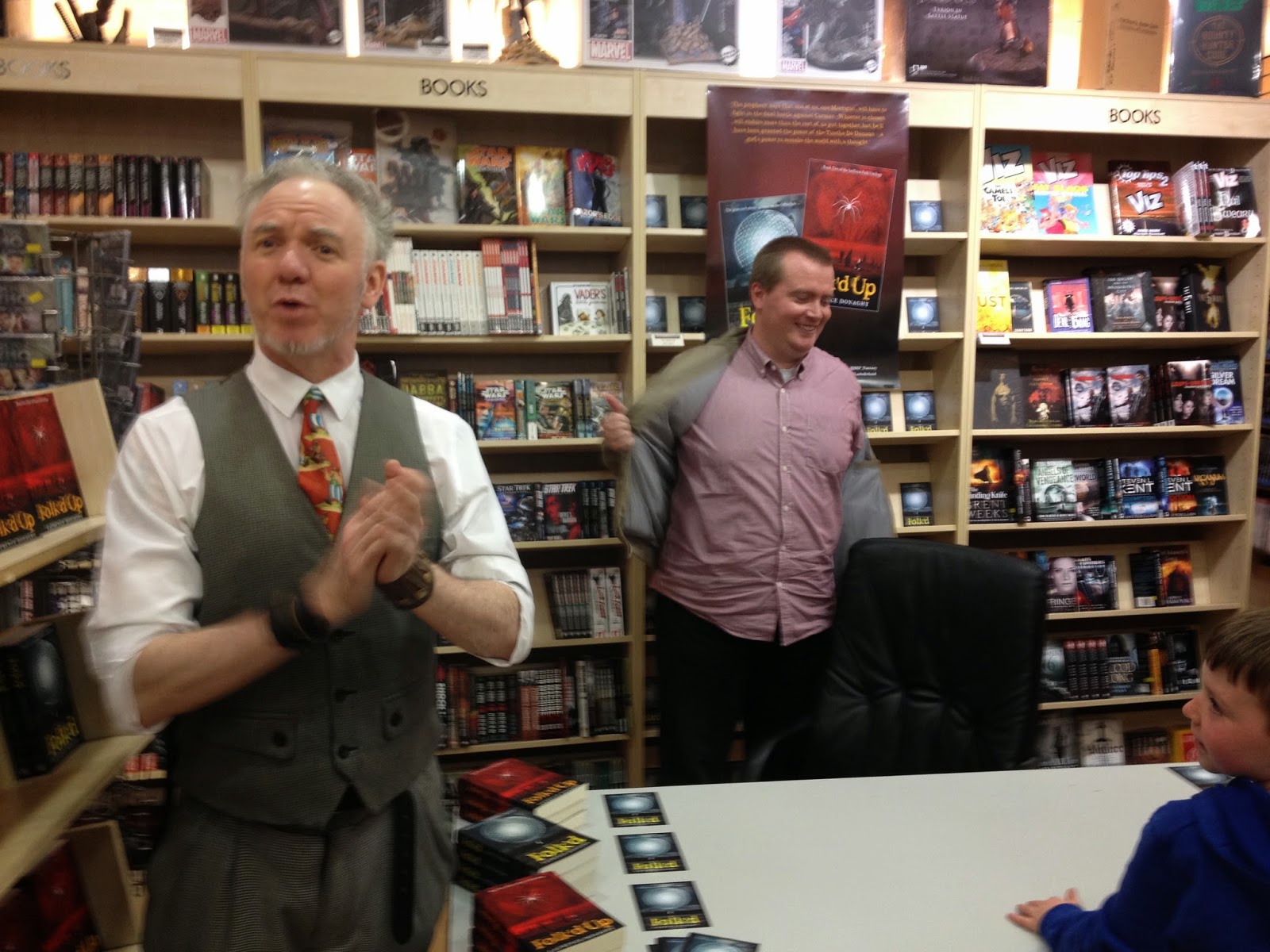 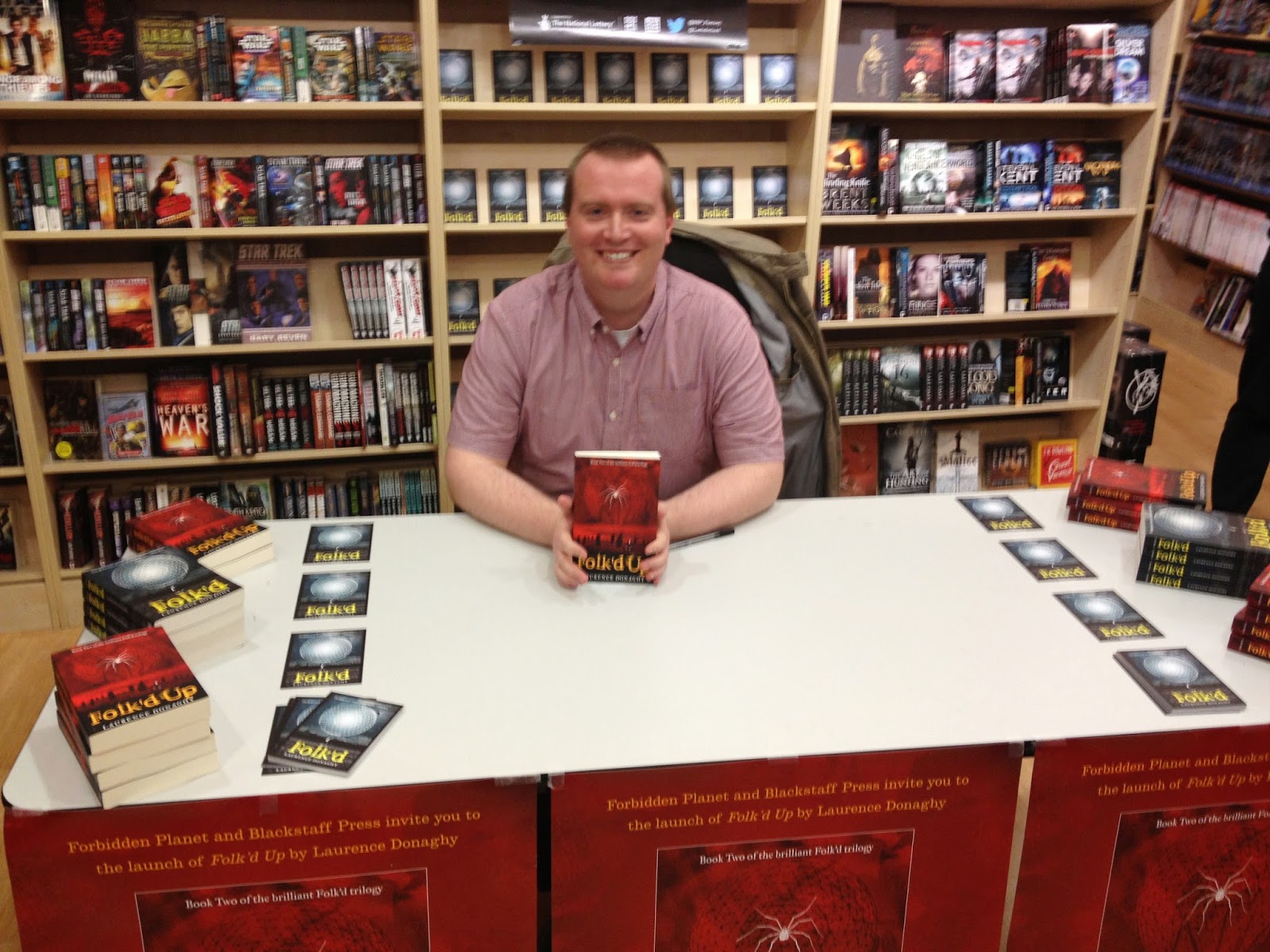 The writer Lawrence Donaghy removes his coat in order to sort out the extraordinary fop who has materialised in front of his signing table doing a rendition of Noel Coward's We All Wear a Green Carnation.
Honestly, these shameless mercurial types seek every opportunity to forward their hideous musical theater agenda. Lawrence soon put a stop to his self serving posturing and overuse of comedic phrasing and normal broadcasting soon resumed.
It was another very successful signing and a very welcome turnout for this young writers second volume in the proposed trilogy. Some returning visitors from the original launch for the first book and a whole lot of new ones coming on board for a wild journey into Northern Irish fantasy storytelling. If you have not got on board yet now would be a good time to treat your book shelf to a couple of keepers.
There was no clinking of wine glasses( Plastic cups, do'nt you know.) but a good time was had by all and carried on into the dark Belfast night if the vibrations on the spidery grapevine are to be believed.
Just as it should be.
A group of Good friends getting Folk'd Up together.
Posted by Malachy Coney Curiouser and Curiouser at 07:49 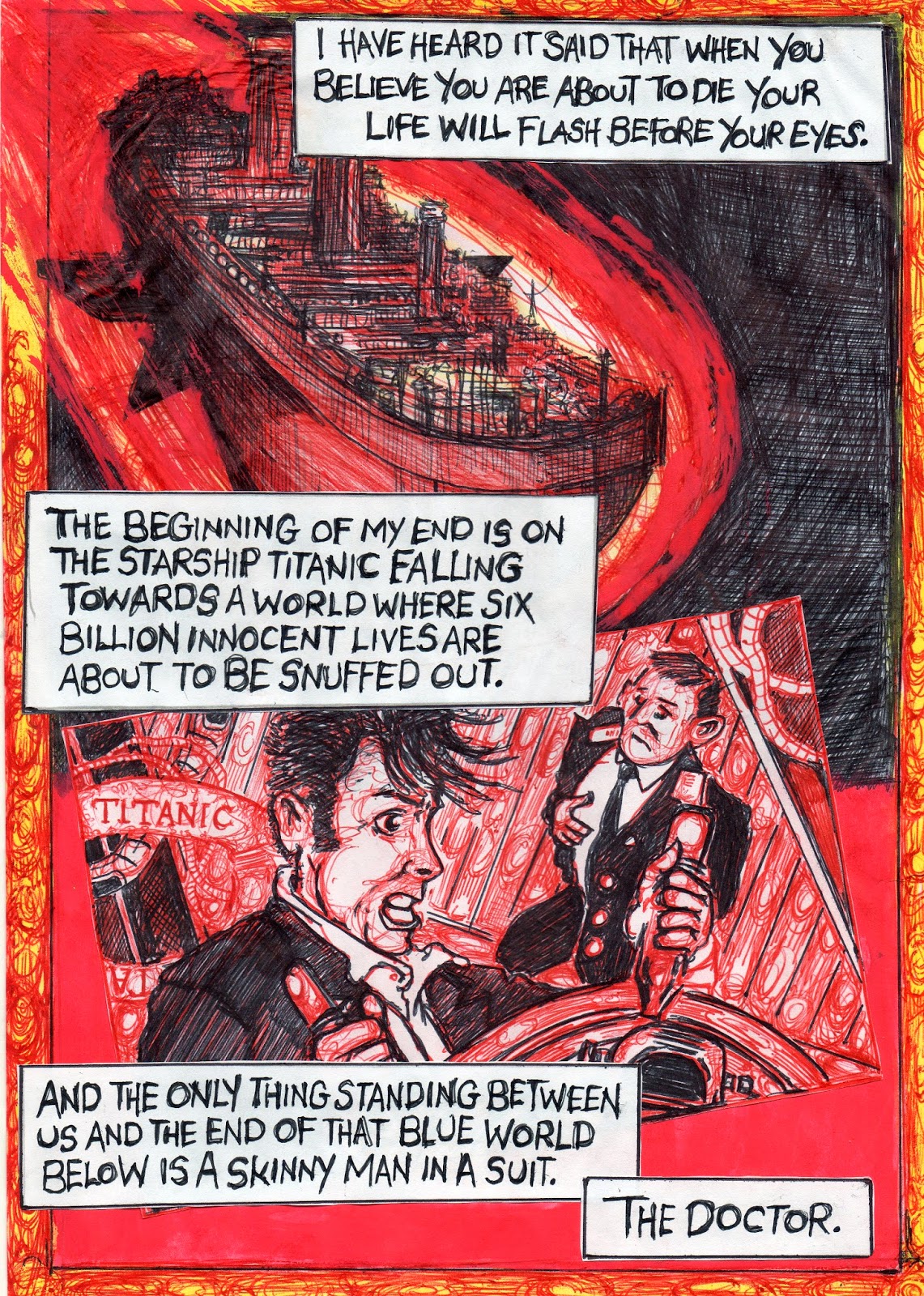 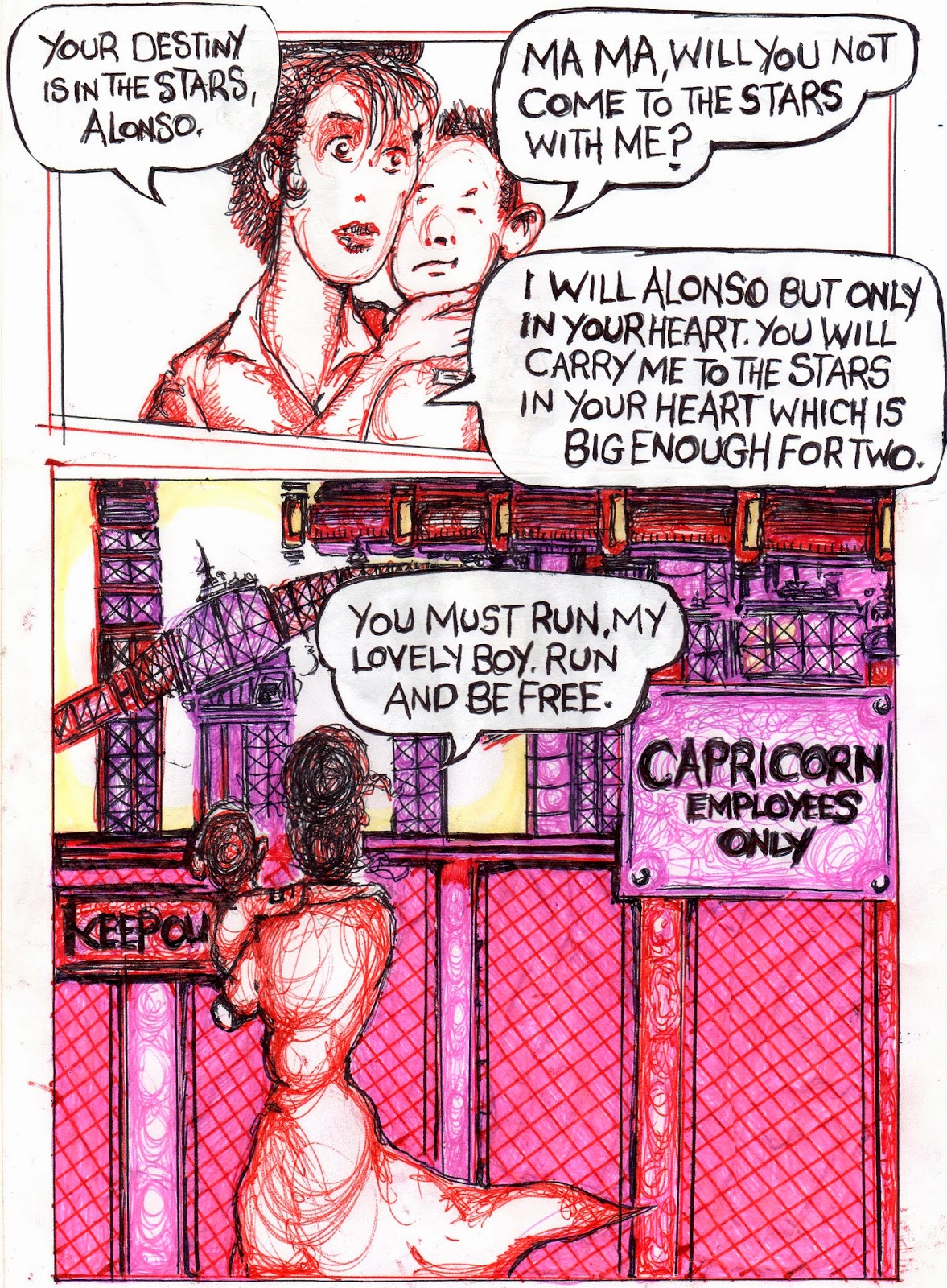 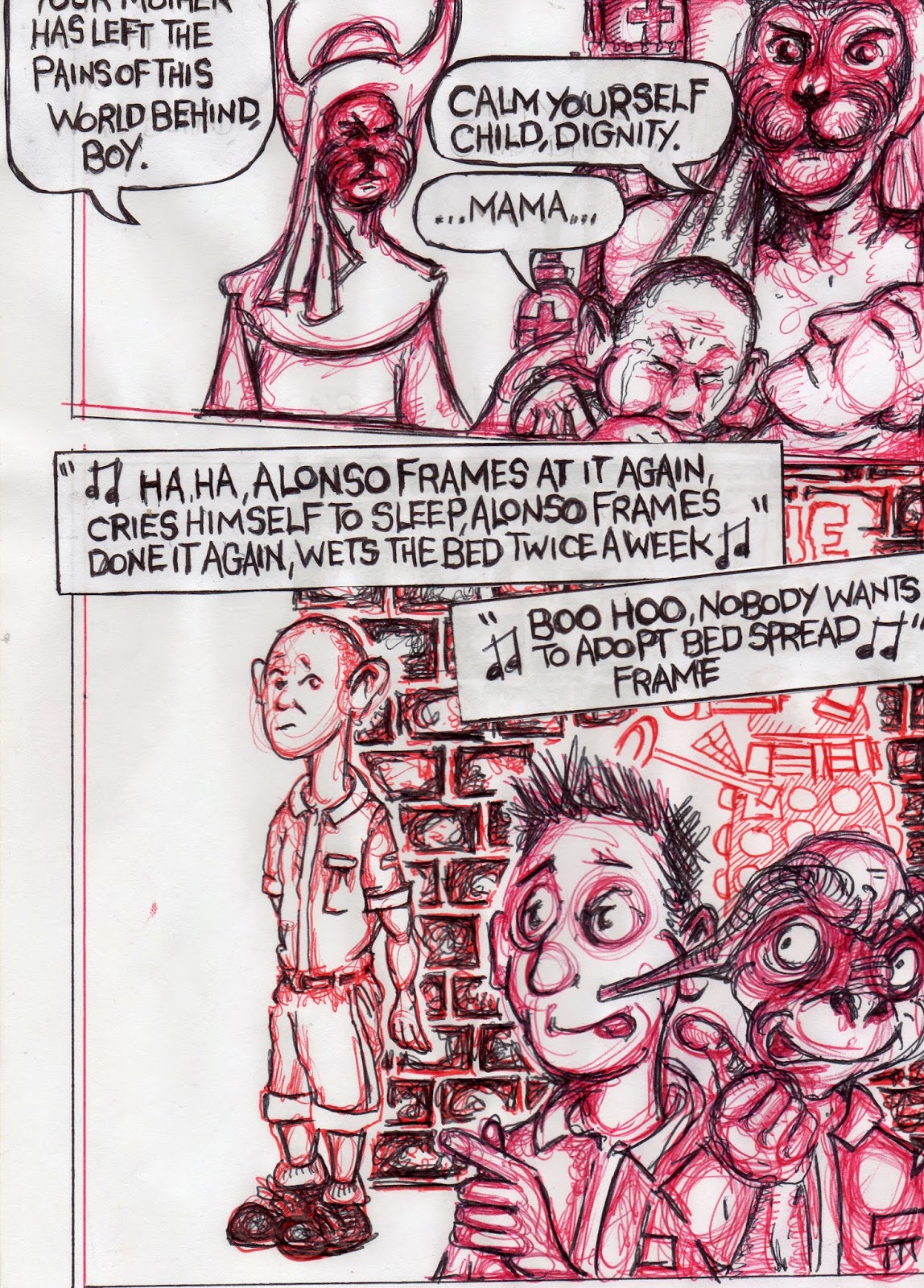 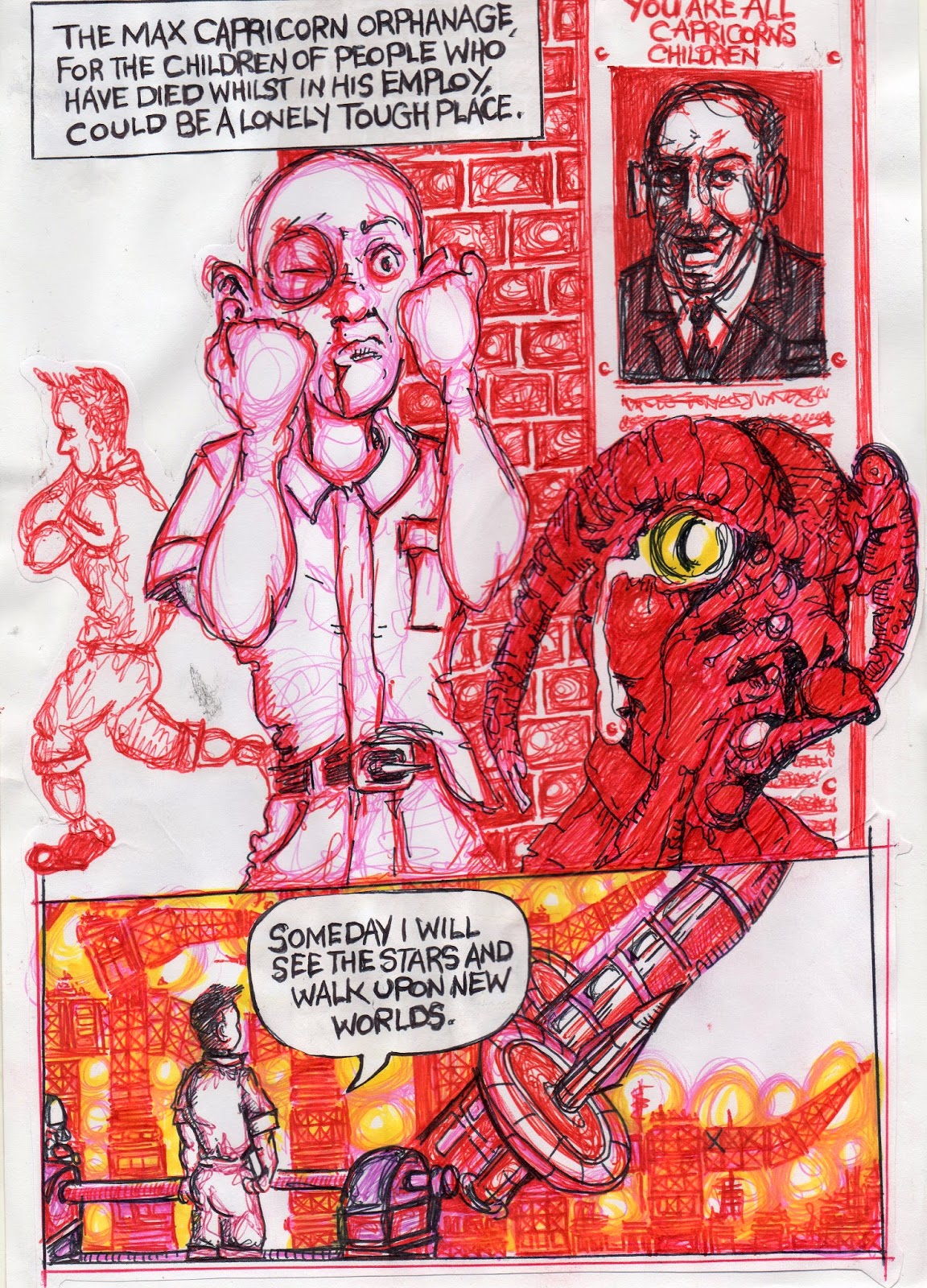 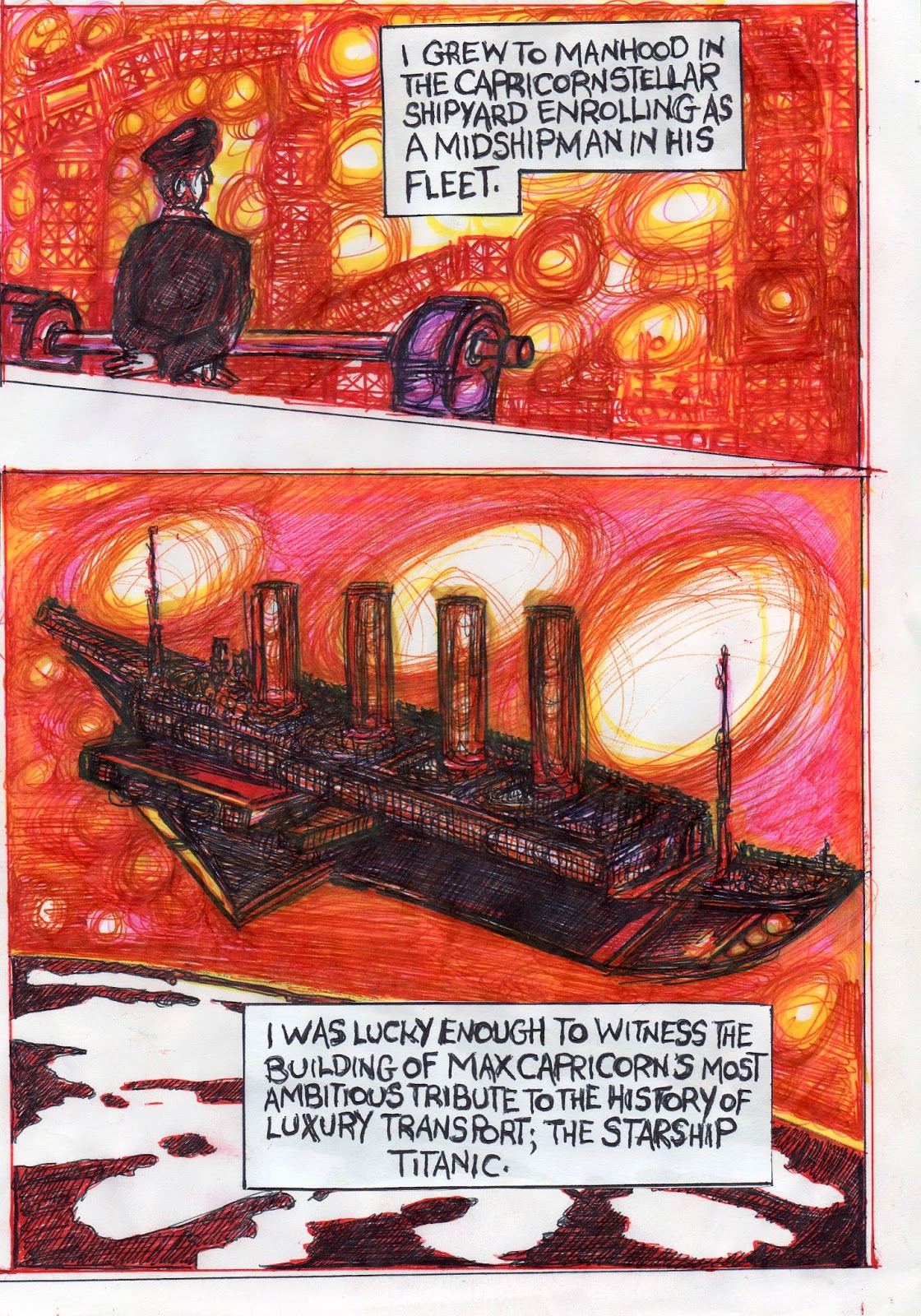 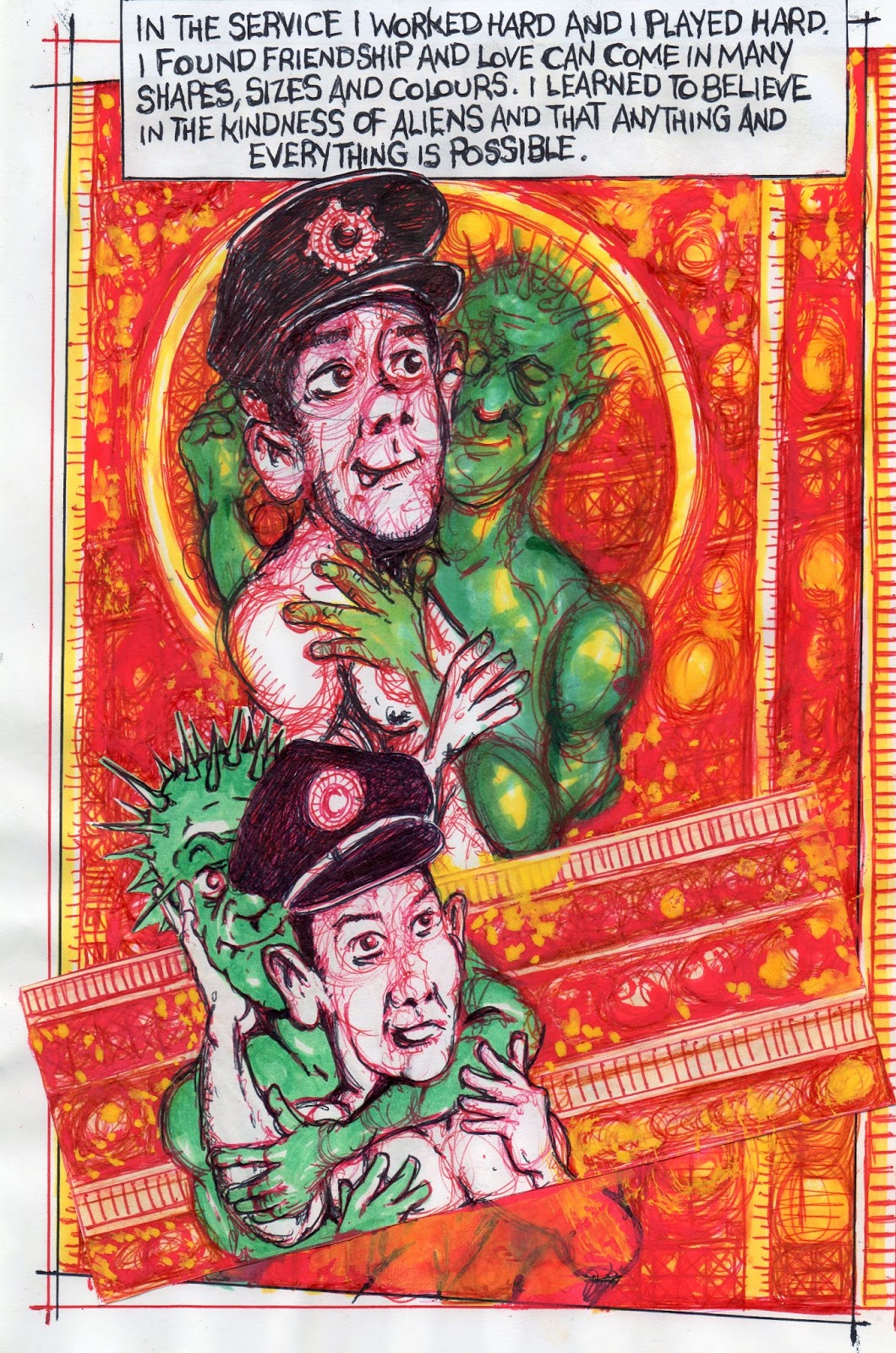 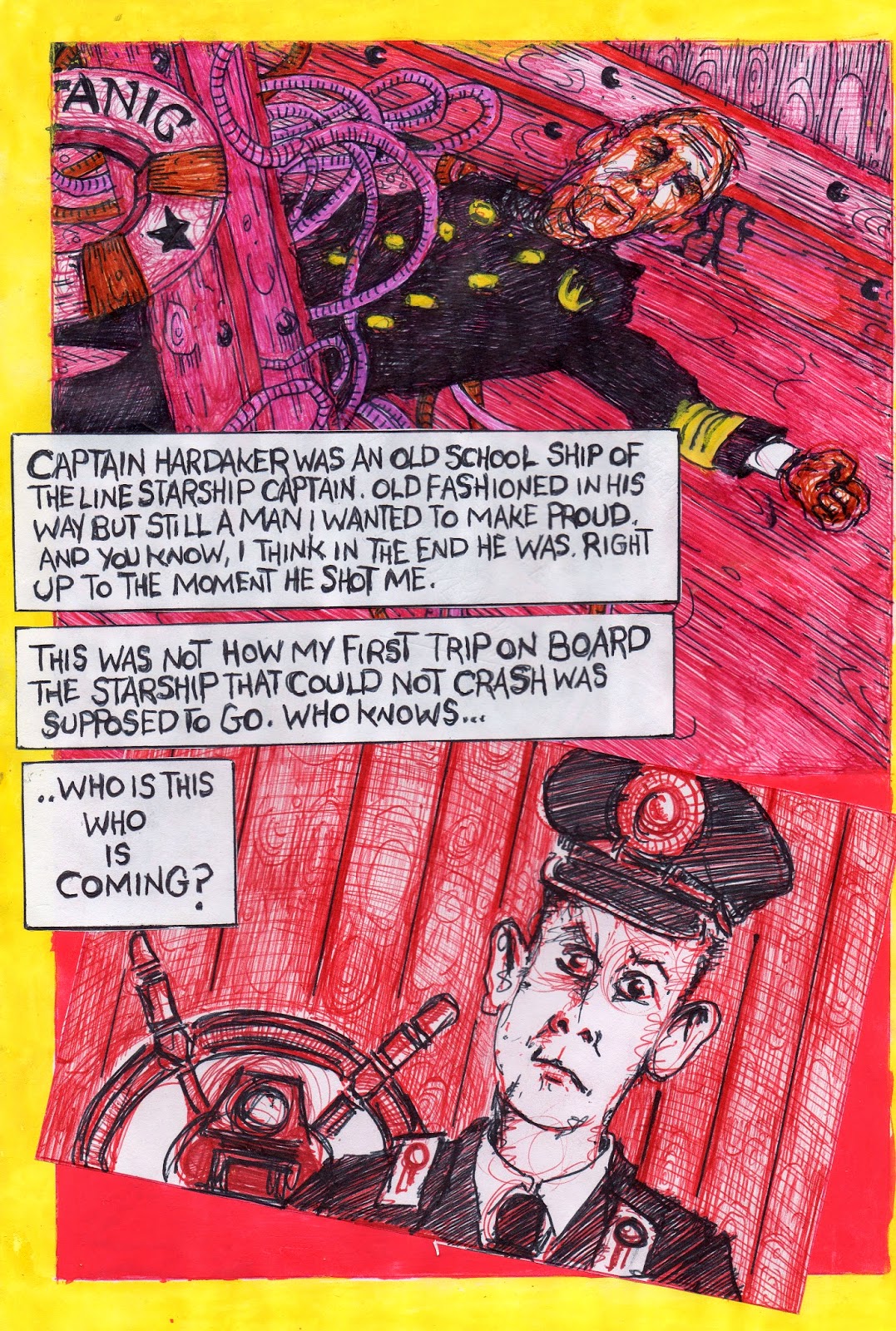 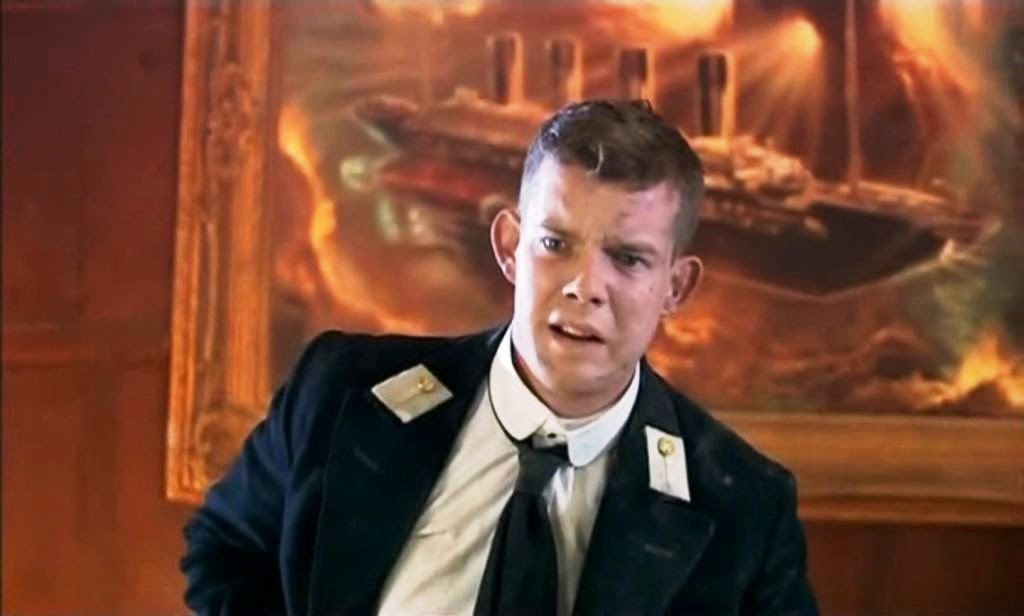 Alonso Frame appeared for the first time in the 2007 Doctor Who Christmas Special Voyage Of The Damned. A real treat for anyone gorged on Christmas dinner and made merry with wine( honestly, my face was as red as Bannakafalatta!). I instantly fell in love with the brave handsome Alonso( played by the brave and handsome Russel Tovey, the man with the nicest bum in science fiction. You get to see it in almost every episode of the wonderful and much missed Being Human.)Alonso's one encounter with The Doctor almost led to his death and the near extinction of all life on Planet Earth.
I have often pondered this might well be the only drawback in meeting The Doctor.
Mind you, that would not stop me from bolting through those open blue police box doors if I ever got the chance.
Anyway I have been working on a wee comic strip about what Alonso did before working for Max Capricorn, where he was born, where he grew up. It is just a bit of fun on my part and is no way intended to compromise the integrity or ownership or the intellectual properties of Alonso's actual creators, the magnificent Russel T. Davis and the Grand Old BBC. It is just something scribbled with respect and enthusiasm by someone in awe of the character and his actual creators.My favorite companion who never became a companion.
Hope to have it up on Saturday so if you are around why not swing by.
All aboard;destination The Starship Titanic.
Somewhere in the upper atmosphere of the Earth, Christmas, 2007.
Posted by Malachy Coney Curiouser and Curiouser at 03:28

The Face From Space. 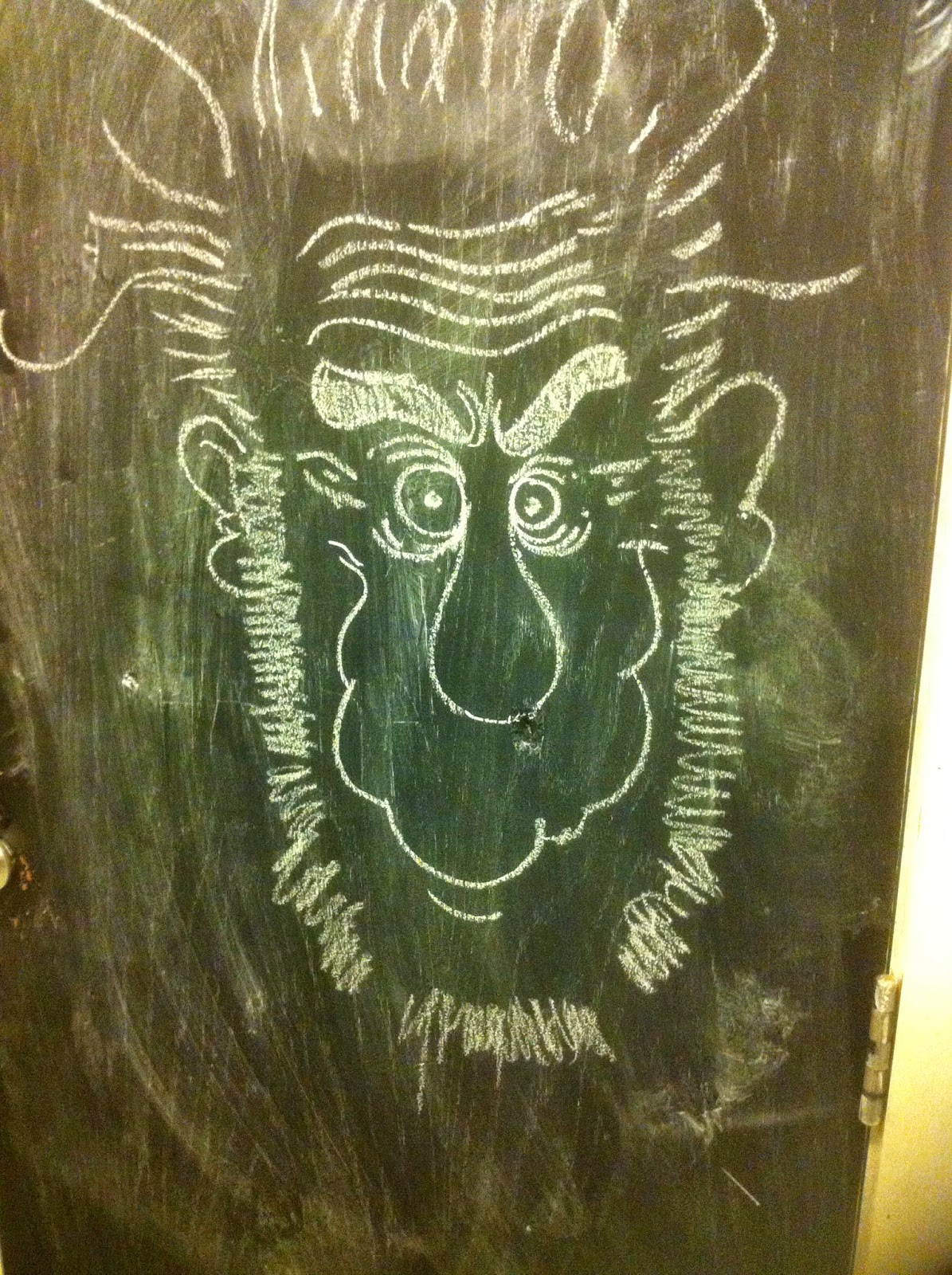 It is a message, a message from the stars, scrawled on the walls of an ancient Druidic Temple by a seven foot tall hairless albino engineer, a sign from beyond heaven's horizon to lead us to our doom on an alien world a billion miles away. Actually this is, I am told, an affectionate caricature of me drawn by a chum. It is, hideous to relate, a most accurate depiction of my visage as it is now. All these years on the same planet and I still look like a visitor. It was done on a chalk board in a toilet cubicle in a downtown Belfast bar. God only knows the shock endured by anyone innocently using the facilities. It reminds me of the time a friend repeated to me what he believed to be the location of Da Vinci's Mona Lisa. " It hangs in A Loo in Paris, you know.".
Ha, Got that beat.
Posted by Malachy Coney Curiouser and Curiouser at 05:53 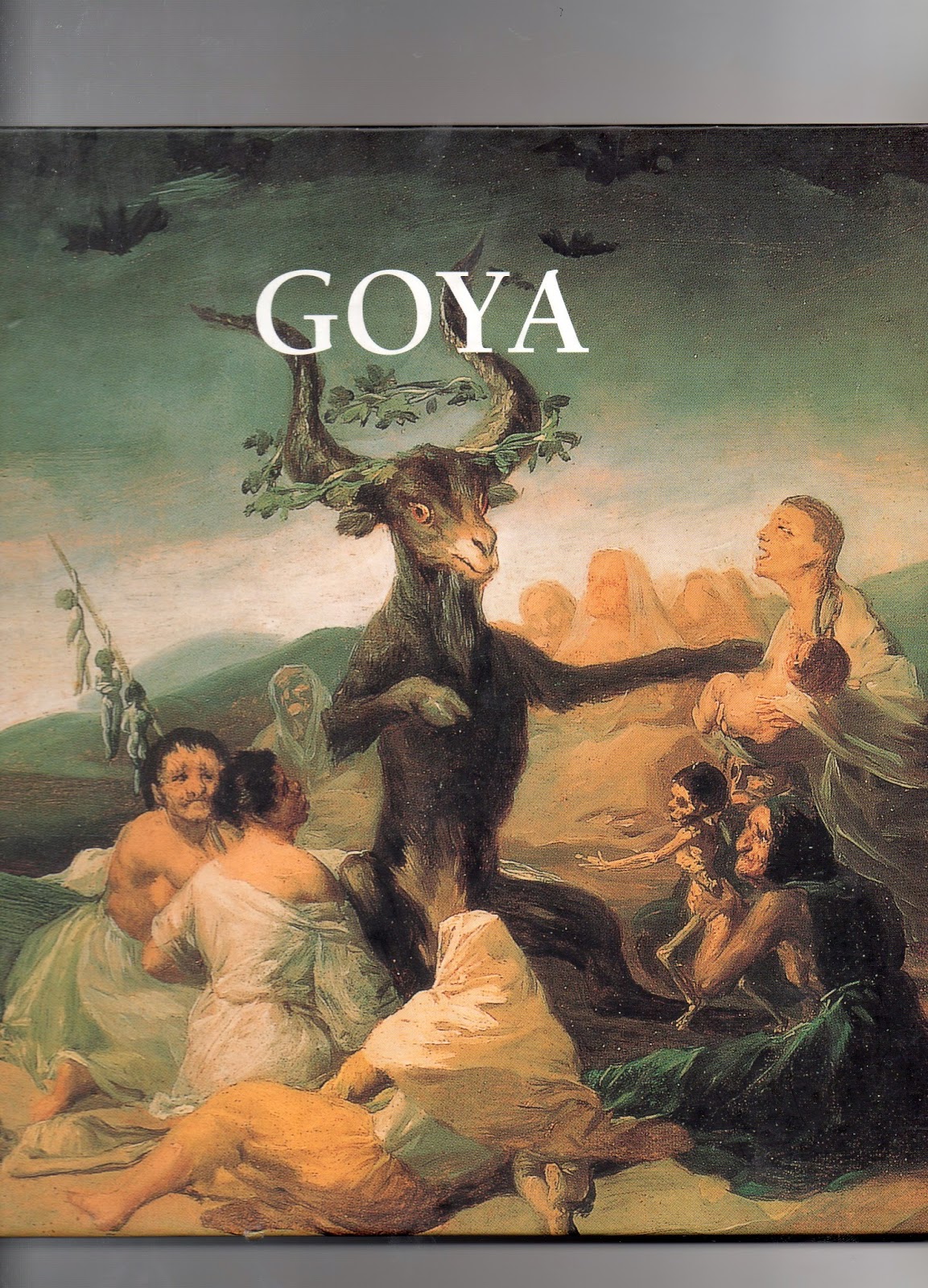 After seeing the above I have been reading a book on the life of a Spanish painter named Francisco Goya to try and get behind the hands and thinking of a man who could produce such a painting. It is called the Witches Sabbath and is just one of many paintings he did which I think go some way to capturing, or at least recording, the terrible beauty that is the heart and soul of man. It was one of six paintings Goya did on the subject of witchcraft and the supernatural forces that trot through the world we share. Although it was a subject that interested him it was thought to be a commission by a wealthy patron, a Duchess who hung it in one of her country houses. boy, I bet she had some interesting parties there.
Francisco lived to be eighty two, a remarkable age and lived a full life that straddled two centuries; the 17th and the 18th. In 1901 his body was disinterred from its resting place in Bordeaux for reburial in Madrid. Where it was discovered his head had been removed.
Sounds like the plot for a Dan Brown book does it not?
Bring Me The Head Of Francisco Goya.
Posted by Malachy Coney Curiouser and Curiouser at 10:01

To Me My Xmen. 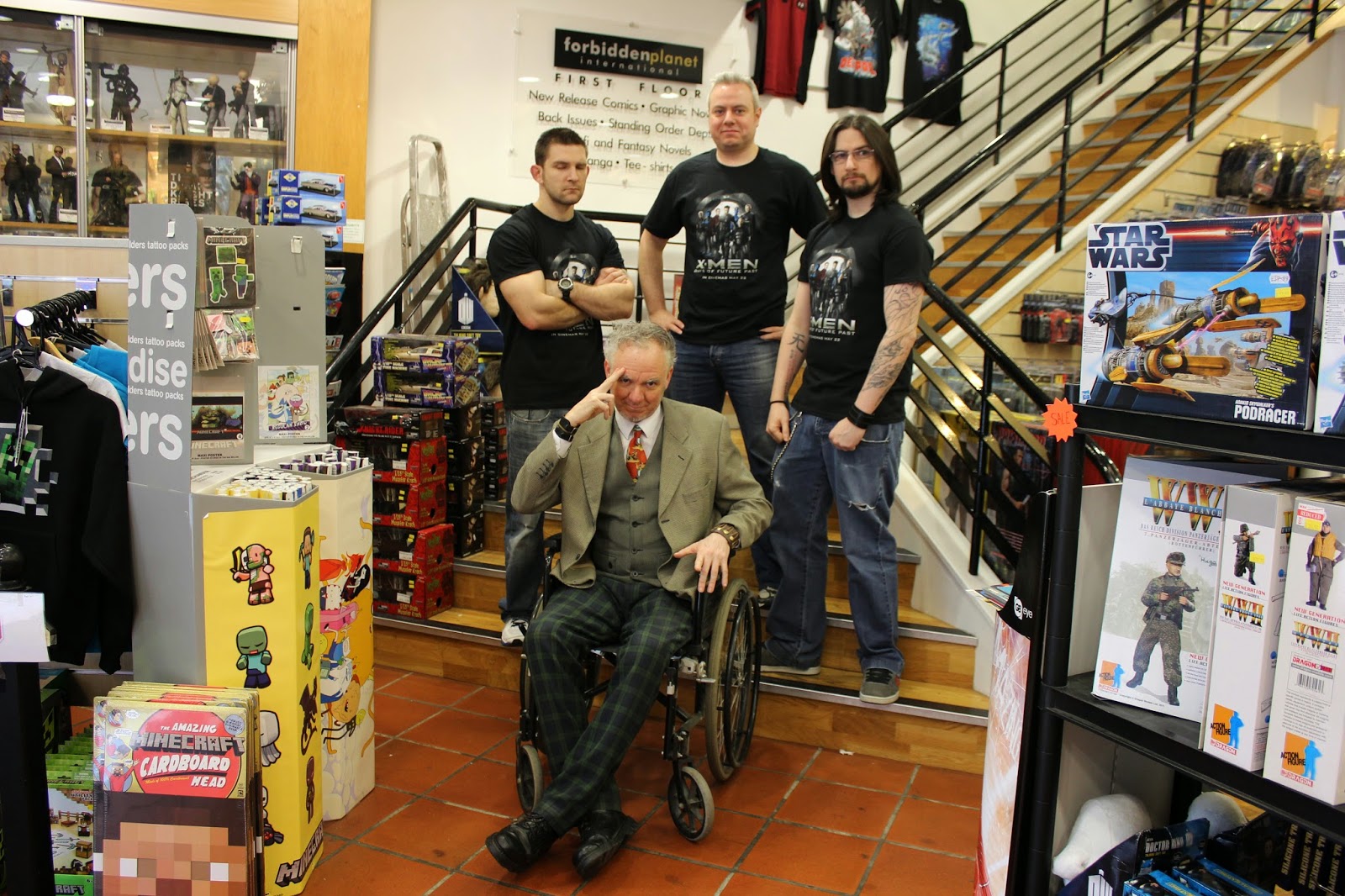 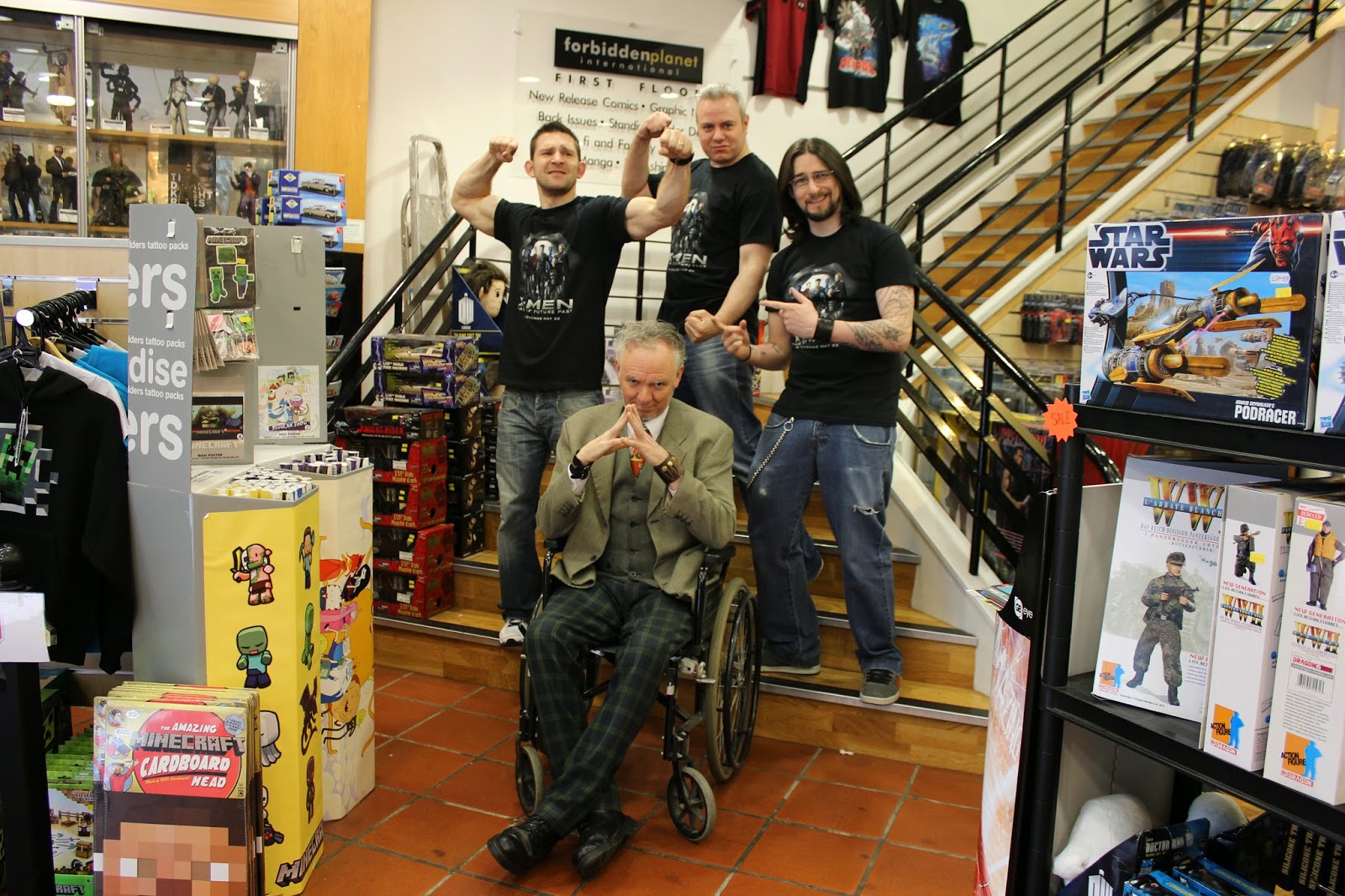 '
'Nuff Said.
Posted by Malachy Coney Curiouser and Curiouser at 12:58 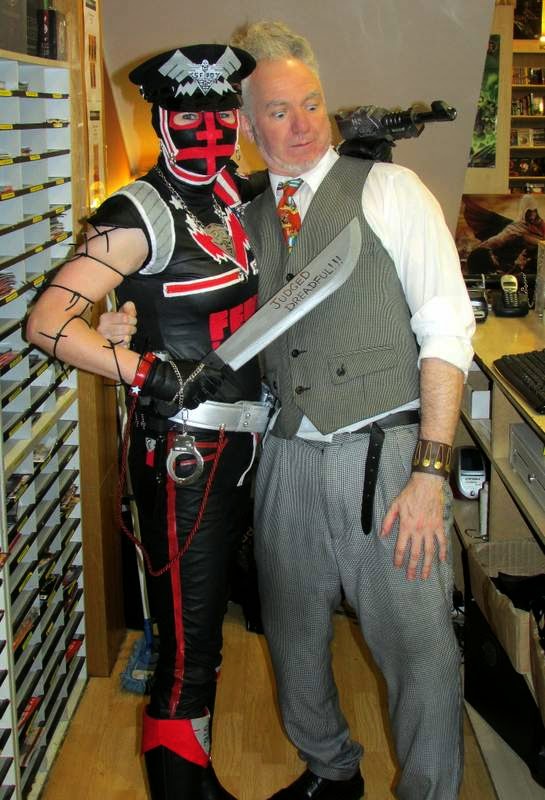 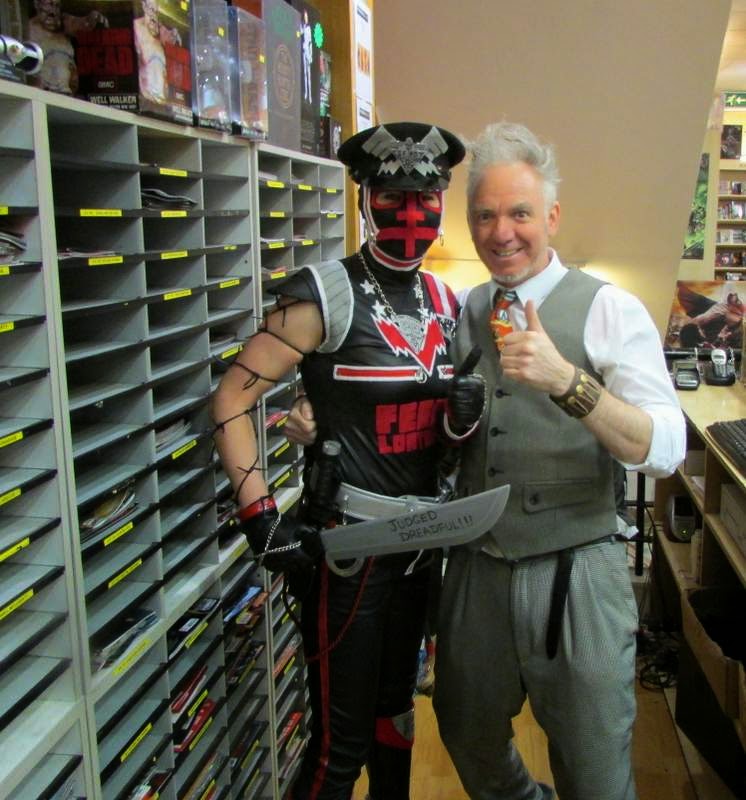 Me and Marshall Law(The Lovely Joanne). A friend told me I look like I am being haunted by my own hair. That there is a ghost on top of my head, that I should use an exorcist instead of a barber. It is easy to say that when you do not have to live inside that head. Another remarked that it is better to live inside the haunted spooky old house than to have to live facing it.
Er...Thank you for that. 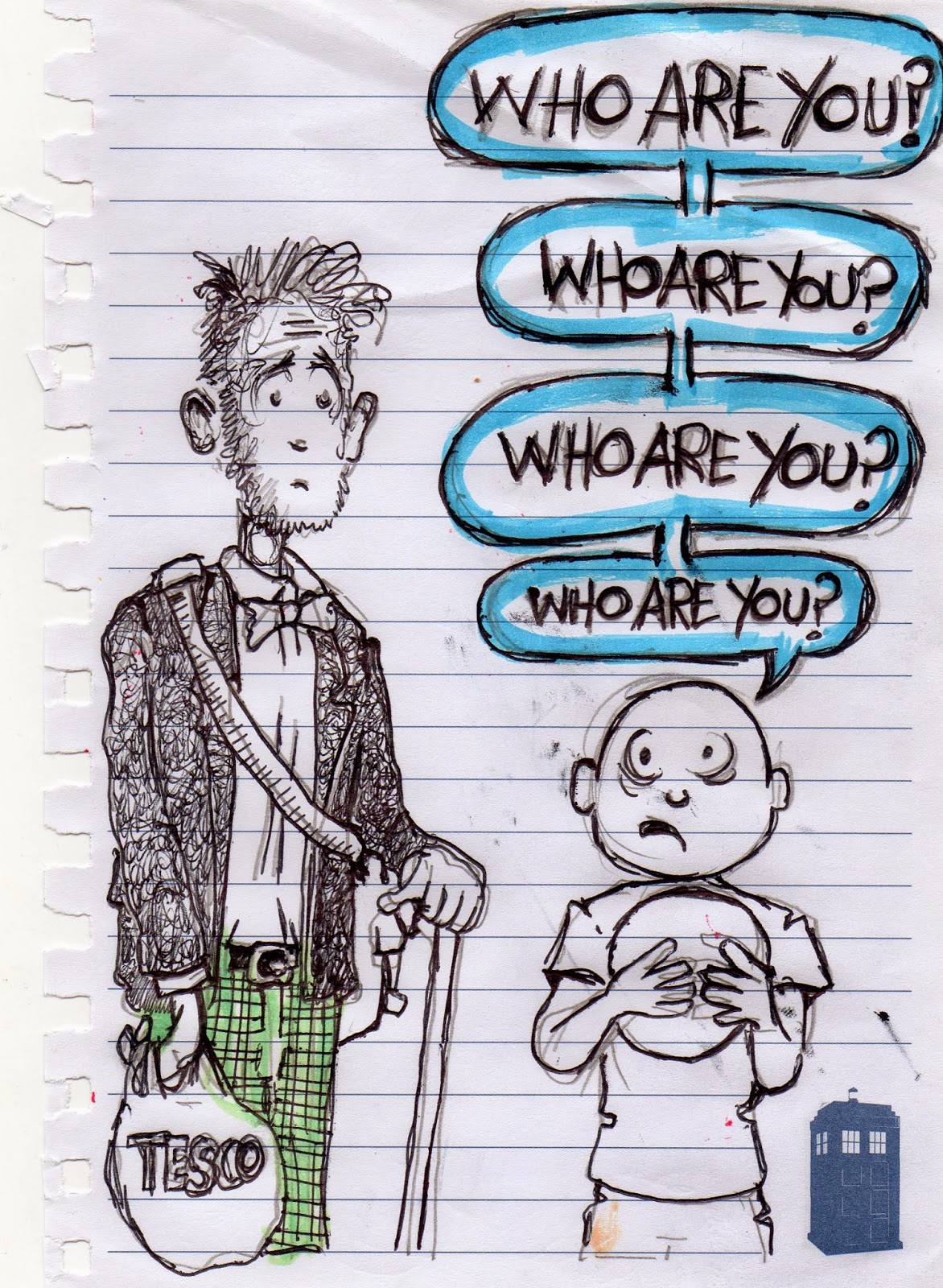 The other day a friend passing in a car took pity on my shambling dander and pulled over offering me a lift. misjudging the distance between the edge of the kerb and the open door of the car I twisted as I was straddled between both and introduced the nerve endings of my damaged knee-caps to Thor's hammer. Anyway, this resulted in a couple of days of extra discomfort( Osteoarthritis is the gift that just keeps on giving.) which had mean ambling like Uncle Claudius, real Richard III territory which means you have to close your ears to the cruel taunts and witty bon mots of the pass remarkable population of Northern Ireland's capital city. It seems like part of the social contract; this freedom to yell randomly your thoughts at complete strangers. ACH SURE ITS A BIT O CRAIC. I had just stopped at Tesco's for a ready made (Four cheese pizza and an old sale Doctor Who Calendar! with the most lovely portraits of all my favorite Time Lord. ) So there I was dandering along with my lovely calendar feeling like i was attempting to climb Everest on two wooden tent pegs when an outraged high pitched voice called out WHO ARE YOU?
At first I did not even realise this was directed at me.
WHO ARE YOU?
It came again.I looked further down the street and there was this moon faced wee boy standing at his front gate clutching a football to his chest as though it were a precious talisman to ward off evil.
WHO ARE YOU? He repeated seeing now that he had got my attention. Huh..What the.. I thought I was too far away to answer this without shouting myself and I never shout unless I absolutely have to.
WHO ARE YOU? He continued.
And anyway, how was I supposed to answer this without adding to the general weirdness of the situation. I just ambled forward wishing I knew how to walk with the abstract devil may careness the rest of the male population seems to have developed. Look at me just putting one foot in front of the other, just perambulating as I choose. No wooly mammoths to worry about, no hungry sabre tooths likely to jump out, no cro-magnon with a club, just a hairless ape dandering along.
WHO ARE YOU?
Over and over til I almost drew level and he had barely moved or shifted position. Just staring at me with ping pong eyes glaring from a head that looked like it had been drawn by Charles Schulz. Just how was I supposed to answer this over familiar baffling question, how does one sum one up in a user friendly sound bite that has no secondary implications? I decided I did not have to so I assumed a jagged worldly indifference and wobbled past.
WHO ARE YOU?
Some neighbors taking in the early evening air in their front garden looked in my direction to see how I would answer. they seemed intrigued by this question and had perhaps wondered it themselves. I smiled and attempted a shrug which is a bit on a fail when you are leaning on a walking stick. Frankly I was a bit embarrassed and wanted it explain in excellent diction I AM NOT AN ELEPHANT YOU KNOW as more heads turned. Well you could hear the question all over the street, who would,nt want an answer.
WHO ARE YOU?
As I moved past I found myself wishing the parents of this moon faced child would come out to see what had provoked this outburst. I mean surely they could hear in the living room some unidentifiable object had entered their airspace 'cause he was certainly wrecking my headscape.
A black Labrador lifted his head casually from the pavement and wagged his tail shooting me a look that seemed to say IT WOULD END IF YOU JUST ANSWERED THE QUESTION. They have a knowing gentle inner wisdom this breed of dog. One of the reasons I champion guide dogs, they are truly man's best friend and wise beyond their furry heads. I shrugged hopelessly in his direction and he sleepily resumed his pavement vigil.
WHO ARE YOU?
He was still shouting it as I turned the corner out of the street.
He may well still be standing there shouting it for all I know.
I mentioned this strange behavior to a close friend later that night and he picked up the resigned sigh in my tone I AM ALWAYS GOING TO BE LAUGHED AT. He said I probably will as long as I dress as a leprechaun  and look like The Judderman. So how is it done? In a world where everyone is screaming for attention how does one come in under the radar and yet still remain true to oneself?
If anyone really knows how to do this please get a message to me via my ouija board.
It is the only modern form of communication I trust.
Posted by Malachy Coney Curiouser and Curiouser at 05:19