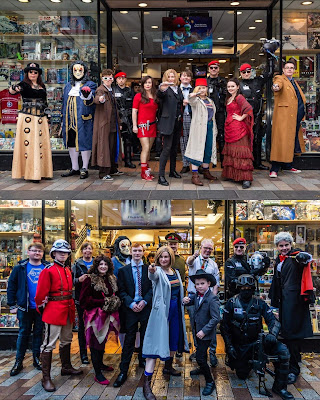 Oh Dear Chums you were missed this year. Almost without planning we had this to look forward to as the dark months drew on and Christmas seemed so far away. The Doctor Who 23rd November Celebration Day at the Forbidden Planet International Store, Belfast.We found common ground celebrating the birth of another much loved being who loves us more than we love ourselves. Just look at the laughs we had!

Twenty Twenty feels beyond fiction, one is tempted to say you could not make it up but the truth is you could, you just would not be inclined to. We are all in it together, folks, but for  good or ill that also means we get to come out of it together.

These photos remind me of better days, days that will come again. 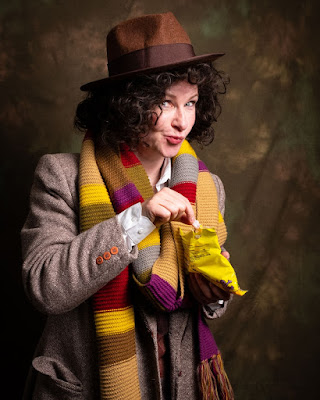 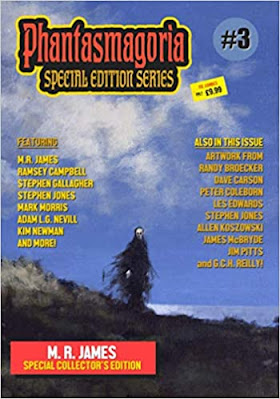 The phantasmagoria Special Edition for this season is an MR James themed one. A lovingly and respectfully compiled directory thick edition that will do honour to any book shelf it is set upon.  I am rather pleased to say I have a piece in this collection, an appreciation of sorts to one of the genre formative writers, one who enriched my reading life for almost as long as I could read for myself.
The Phantasmagoria Folk have excelled themselves with this rightfully crafted special edition, with bar and hair raising illustrations and articles and essays aplenty, one whose covers I am flattered to be between. And what about that stunning wraparound cover...
Here is a suggestion to the curious; I warn you it will fly off the shelf.
Posted by Malachy Coney Curiouser and Curiouser at 04:38

Doctor Whos Out Of Time. 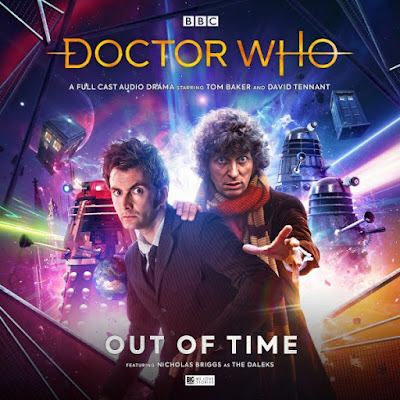 Brace yourselves, the adventure level is about to rise from four to ten and back again. The Fourth Doctor and the Tenth Doctor are about to cross each others paths. And off course trouble is not far behind. Its a funny thing,you know, we spend so much time in The doctor's company, seeing the universe through his eyes, whatever head they are staring out off, yet when he throws out a bon mot such as " I remember standing in Leonardo's workshop and telling him he would never get it off the ground!" or "I posed for Michealangelo, once" and we ask ourselves "When did he do that/" And as much as we love those time traveling Easter eggs we cannot help ask ourselves when he was out of our sight long enough for that quip to be true. So it is always a treat to arrive at a place or during an event and we discover the Doctor already there, not so much doing the thing he always does, of saving the day, but just "doing" or "being", things like getting his hands dirty or painting or building something. That is how we first come across the fourth Doctor, splattered in paint, striding around in his painter's smock. We can almost see his paint dotted curly hair, a Jackson Pollock hedge. He is visiting The Cathedral for a bit of respite and some unchallenging fun and has already made at least one good friend. It is not too long before we learn that The Tardis has once more brought The Doctor not so much to where he wants to be but where he needs to be ( or where, rather, others who need his help need him to be.) Along comes trouble and not before too long arrives his older self, also seeking a respite from his troubles. Two Doctors add up to twice the trouble, I suppose, so who else should show up at this celestial location but the big bad themselves; The Daleks.
Matt Fitton delivers a fantastic script and the two leads rise to the occasion, ably supported by a worthy supporting cast, with Nicholas Briggs on especially menacing form. His Dalek controller has a heft to it with a weighty powerful delivery. A timely reminder of how bad The Daleks can be, universely wicked. The Doctor, being the smartest man in any room he enters, does not take long to work out that this skinny younger man in a pin stripe suit is an older version of himself.and in the short time before the Galifreyan penny drops there is some very enjoyable verbal volleyball between the two incarnations. Tennent teases and gurns while Baker plays the wise fool disguised as Harpo Marx. TheCathedral is a suitably Whoish location for these reality bending shenanigans and The Daleks a worthy underminer of wondrous things.If the Universe was ever forced to ask itself "Why can we never have good things?" it should direct the question at the Kaled scientist Davros, He not only has the answer he supplied the reason.
There are a few almost meta moments as the Tenth Doctor comments on The Fourth, with much affection and an aching sadness. You, as the listener, can easily imagine the affectionate gleam in his eyes "Just look at him go...", noticing that when that shock haired bescarfed younger version of himself enters a room he owns it. And in ones minds eye we share that vision, as a youthful and vigorous Tom Baker strides into the very heart of the action and the danger. Imagine, if you will for a moment with respect, if Elizabeth Sladen was still with us, as each Doctor could take one of her hands and they run and run and run...
Posted by Malachy Coney Curiouser and Curiouser at 04:37

The Eccentric life And Mysterious Genius Of Edward Gorey. 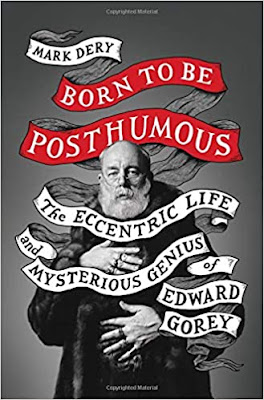 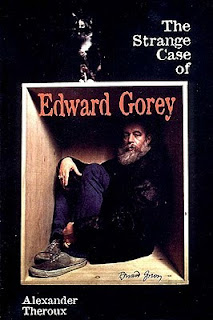 ....oh my Giddy aunt, I was not expecting to read two Edward Gorey biographies back to back, delightful as the experience was. A double bill I never saw coming until I was ready for it, I suppose. Two lovely biographies written with great insight and affection for an extraordinary artist who not only walked the walk but wore the coat..so to speak. I generally avoid reading books with the same subject matter one after another  so as not to dilute the affect of what I may learn, or undermine by familiarity. Some people may be well read, I am thinly read.

Like so many people, I bet, I was under the impression that Edward Gorey was an artist from another century, not the one we left behind two decades ago but the one which ended one hundred and twenty years ago. The visuals he produced with pen and ink and brush were so off another era and felt so "lived" I thought for sure this was a man who came from the same era as Lewis Carroll or Edward Lear. This turned out to misjudged as while the characters and scenes may well be draped in a faux Edwardian Victorianna he was in all other respects quite thoroughly modern. So much so that when I finished one volume I was drifting into another before I knew it, basking in the Gorey details.

One of the most surprising things I discovered about Edward Gorey's art was the books are actual sized reproductions of the original work. I had assumed , something perhaps one should never do with regard to the creative process, that the incredibly intricate line-work was produced on a larger scale, then reduced to fit the format that is now so recognisably Gorey. Edward Gorey's little art books stand out in whatever book store they are displayed, owing little to the formats art books are generally reproduced as. He has made that format so much his own and gradually won over many a book seller who initially found displaying his work and output awkward. That in itself becomes a lovely word to convey the otherness of Edward Gorey's body of work, beautifully awkward. Well, it works for me.

And it worked for so many, many more, generation after generation. Edward Gorey once described his subject matter as "literary nonsense", a field in itself with an artfully crafted series of visions of melancholia and world weary ennui. His faux Edwardian chique winning a legion of appreciators. His art world and publishing credentials aside he also made a significant impact on the theater world with contributions to the 1977 stage revival of Dracula with his costume designs bagging him a Tony award and a nomination for Best Set Design, which many since felt he should have won. he is even more remembered and even reverred for his short animated into for the PBS series MYSTERY, with the introduction by host Vincent Price who welcomed all watching to the Gorey Mansion. Generations found that animated introduction being craftily imbedded in the walls of the minds of their personal theater, carrying it with them in their collected imaginations. Appreciating as adults that which they knew as children to be unique and cool.

Edward Gorey cut a striking looking figure, every inch the self created Bohemian. Pioneering a bearded aesthetic years ahead of its time, swathed in a body length fur coat with every finger adorned with rings. A hand made eccentric, molded by his own artistic inclinations into a form of his own devising. There was a noticable "sexlessness" in his artwork, something that may well have bled in from his personal life. In his own words; " I am neither one thing nor the other particularly. I am fortunate in that I am apparently reasonably undersexed or something. i have never said that I am gay but I have never said that I was not. What I am trying to say is that I am a person before I am anything else. I suppose I am gay but I do not identify with it much."

These were two lovely books, written by two fellows keen to share the details they learned about this quite mysterious man who pulled a curtain about his self created world, opening it at times to let us peek at the wonders he was capable off. The two books sit so comfortably next to each other, each filled with pictures and photographs that reveal a life lived artistically. 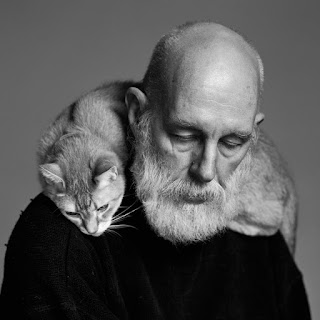 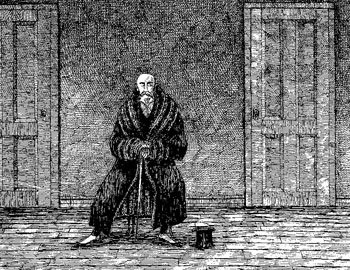