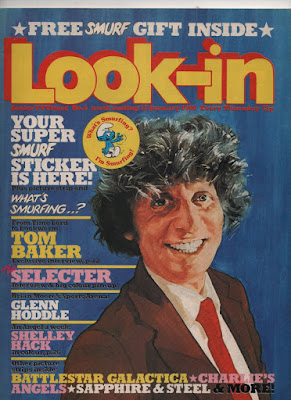 Oh Boy, look what I finally tracked down thanks to my chum Connor. I have been looking for this Look-In for such a long time. What with this eye-catching cover painting of the man himself and a lovely article with some nice photos on the inside. What a striking man Tom is, every inch the sartorial bohemian. he just so embodies the anarchic intelligent rebel made of stars.
There are a few other really interesting bits and pieces inside. Some beautifully drawn comic strips based on some of the popular shows orf that 1980's era. And there is a significant interview and photo shoot with one of the great British bands of that time; The Selector. Along with The Specials they were at the forefront of the ska explosion. Great dance tracks and great political and socially relevant songs in the days when people actually wrote about the times they lived in and the lives they led and not some foggy narrative of how people think their lives ought to be. Such times.
It must have been something to be sitting in a pub in the West End of London and to unexpectedly hear Tom Baker's tones drift across the bar.( I am guessing that was his watering hole of choice in those days.So many actors only so many pubs!) Jeffrey Bernard may well have been unwell but Tom baker was surely on top of his game.There is an amusing wee item inside that a reader sent in, a LookALike/seperated at birth item contrasting the similarity between Tom's Doctor and Harpo Marx's er.  Harpo Marx.Which is a very real observation.I do not know if Tom had any brothers but just imagine if he had a twin.Or eleven more brothers. Or eleven twin brothers. A Baker's dozen.
Boom, Boom! 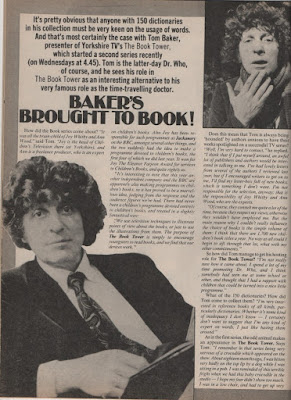 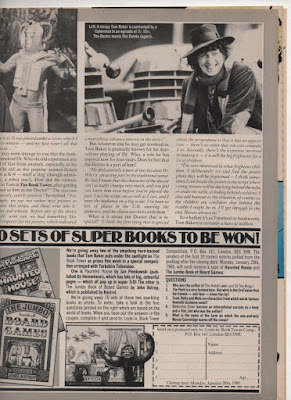 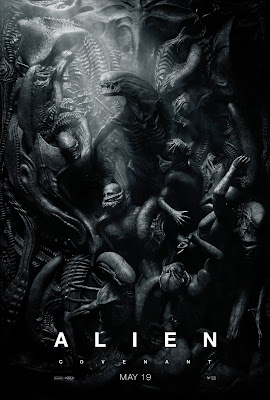 Twentieth Century Fox released another new poster to whet our appetite for the fourth coming Alien Covenant. As if they needed to after that last trailer but thankfully they have gifted this positively Miltonesque nightmare. It is like a religious icon or fresco adorning a crypt wall lamenting the torments of the damned in the hell that waits just below the surface of all things for the unwary.
The first poster warned; Run.
The second poster warned; Hide.
This one seems to say; Throw your arms in the air. You are doomed.
Posted by Malachy Coney Curiouser and Curiouser at 09:55 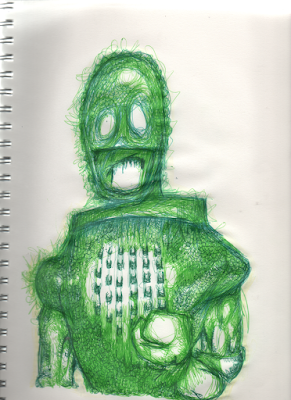 (From my sketchbook.)
If the rumours are to believed yet another familiar being is to return in the next season of Doctor Who. Thats Daleks, Mondasian  Cybermen, Missy and possibly Ice-warriors. It might well be Peter Capadi's last series but they seem determined to make it one to remember. 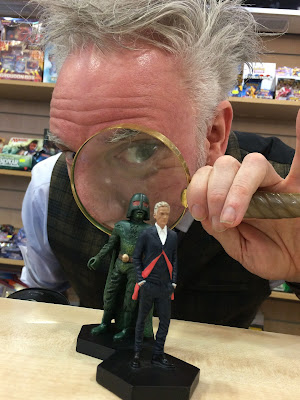 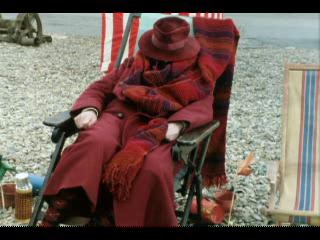 As far as I am aware the longest single tracking shot in the history of Doctor Who takes place during the opening minutes of The Leisure Hive. For those who remember the original transmission on a long ago Saturday night there was barely a chance to absorb the sudden surprise of a reworked theme with a dazzling tumble along an infinite star field before we are brought to Earth on a pebbly wind swept Brighton beach.
It looked and felt different.
Something had changed.
This season six of Tom baker's Doctor stories for Big Finish takes place round about this time and it feels like it. It is a proper pea souper guv' an' no mistake. Spooky goings on around the Palace Theatre involving a savage beast that eviscerates its victims and a mysterious gentleman thief who comes and goes unseen by all. The Doctor, K9 and Romana team up with their ever reliable and indefatigable investigators of the infernal; Jago and Litefoot. ( Big Finish' Jewel in the Crown. Honestly.) I felt like cheering when I heard these old familiar voices engage with each other It rather felt like a slightly unfamiliar chorus from a Christmas Carol you know you heard some time long ago. Even the clapping audience, within The Palace Theatre, responding to K9's on stage red-herringry had a familiar echo of The Good Old Days.
There is a Saturday Night winteriness to proceedings. Time travel using the ear as a the ultimate difference machine. A lovingly crafted recreation of  the atmosphere of what turned out to be the final series for the High Church Who himself. Take a look at the referenced image of Baker from this period used on the cover of this CD story. It strikes me that distant stare of his is because he sees an ending on the horizon. I did not know it then and I hope this is not the case now.
That final season with Tom Baker where John Nathan Turner really took over the reins on the show was so much more ambitious and diverse than  many give it credit for. Although the Big Finish seasons do not have a an overarching dominant thread they are generally just as ambitious and diverse and I do mean that in a most complimentary sense.
Hurrah for the stories yet to come. 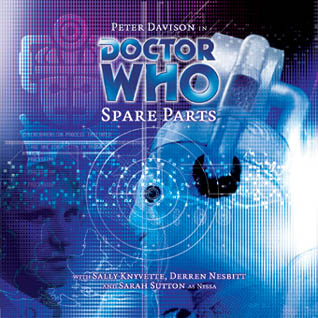 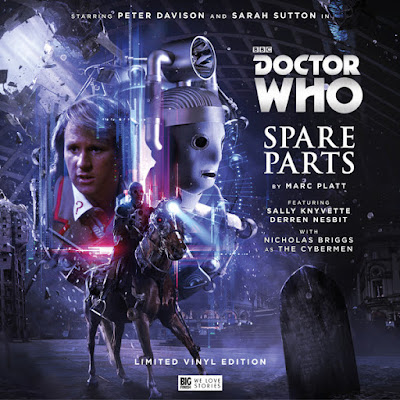 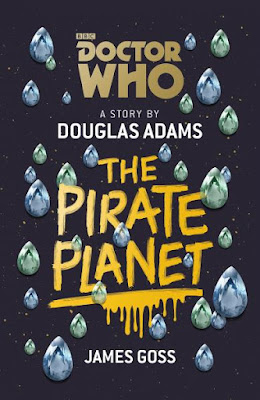 "Mister Fibuli!!" I used to shout it randomly, at the oddest times and for no particular reason (Even once after escaping from some skin heads who chased me across Art Collage Square.)No one ever got what I was on about. Nobody I grew up with or hung around with was really into the same things as me. "Mister Fibuli!" I would croak in my deepest baritone and be greeted with a dismissive roll of the eyes, or a tired sigh, or even an earnestly Belfastian  "Wise up!"it is an entirely suitable response to even the most random "Mister Fibuli!"
I am doing it even as you read this.
I think this is the third adaption of a Douglas Adams script from around the 1977/1978 originally broadcast episodes that have been published in the last two years or so. Hardy and reliable hands bravely tackling material generated from one of the most original and highly regarded minds ever to work on the original series. The other two stories were adapted from scripts that for very different reasons are remembered for extraordinary reasons(City Of Death achieving the highest viewing figures for a single episode and Shada being a story that was neither completed nor broadcast for that very reason.) The Pirate Planet , the second story in the key to time season, is probably the less fondly regarded awkward cousin who came to visit once and has been talked about for all the wrong reasons.
This reworking of the existing material and some unseen archive work should go a long way to correcting that impression if not disolving it entirely. James Goss has done some dazzling tinkering on that combination of Adam's treats as well as bringing his own considerable abilities to the table.  I have to say that after a lifetime of reading Doctor Who novels and novelisations and stand alones and special editions, Virgin and BBC books that this one stands out heads and shoulders above so many of them for one amazing reason; He so captures the mercurial and unpredictable nature of Tom Baker's performance so perfectly it is frenetic even on the written page. A Joy! It is the raw energy and enthusiasm for the ideas and the characters that really jumps from the book transmogrifying the bonkers original material into an enjoyable feast for the imagination.
And there is also the pleasure of seeing old ideas refreshed; the Mentiads referred to as The Mourners, the characters original name in Douglas Adams notes apparently. Never knew that..Great!
Treat yourself.Bound into Spring with this slice of Whovian magic.
Its all so improbable you know it has to real on some level
Er, probably.
Posted by Malachy Coney Curiouser and Curiouser at 04:46 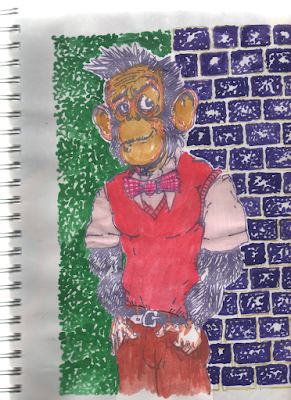 (From my sketchbook.)Saw this fellow waiting at the bus shelter. There was something so familiar about him but I just could not put my finger on it.It rested in the sleeping part of my memory and then it hit me. The bow-tie. It was the bow-tie. I had left a bow-tie just like it into the charity store just up the road. Along with some old jackets. Maybe it was the very same bow-tie and it had found itself a new owner. More power to his elbow. It really suited him. More so than me.  On him it looked like he was dressed down and relaxing after some adventure up the Amazon, discovering some lost idol in an ancient cultures dangerous and forbidden ruins. When I wore it I looked like an ice-cream parlour salesman from the fifties.It is all in the attitude of the wearer I suppose. Or the lack of it.
I do not know if bow-ties are cool. I am a terrible judge of such things.
But I would dare to say that primates in bow-ties are definitely cool.
Posted by Malachy Coney Curiouser and Curiouser at 04:46

The Men From Mondas. 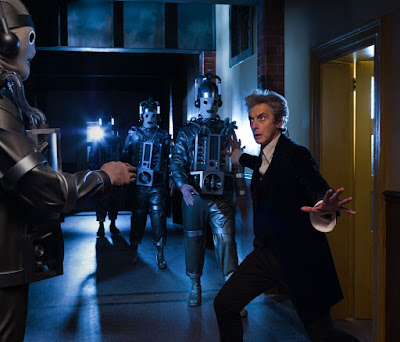 Now here is a good way to start the day. A striking and exciting image from the next series of Doctor Who. The creepiest Cybermen of them all are set to return.Talk about bio-mechanics. Just look at that human hand at the end of that mechanical arm. Half men and half machine created in an age when kids still messed around enthusiastically with Mechano sets. It has tha classic Brit-retroness about it.
I do hope they incorporate elements of the amazing Big Finish story Spare Parts. In that story The Doctor and Nyssa arrive at a crucial time in the history of the doomed planet Mondas when things could have gone any which way. The writer Marc Platt crafted a scary and very moving meditation on the dangers of scientific hubris when confronted with an extinction level series of events. And Peter Davison and Sarah Sutton really rose to the occasion with material that surpassed many of their on-screen stories.
I do believe that Peter capaldi is about to reward all the fans who have had faith in him. 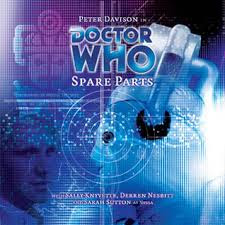 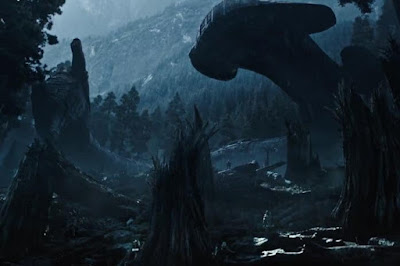 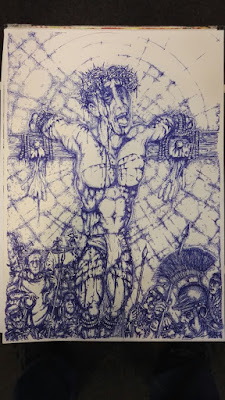