Archie And The B52s. 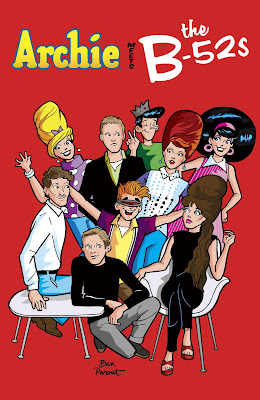 Oh Happy day, heres a wee treat to chase away the Storm Dennis Blues. This comic was released this week and can be found in stores of quality and distinction the world over. The lovely Archie and company meet the even lovelier B52s. Just look at this cheeky cover, a cool reprise of the first album cover.
Go on, Cheer yourself up and treat yourself. You are going to encounter some bright new friends, reconnect with some older ones you may not have seen for a while and have a few laughs along the way.
Not a blast of nostalgia but a trove of new fun memories.
Heres my pic fromm an old sketchbook of the legendary Ricky Wilson, who left the stage far too early but will never be forgotten by anyone who loves great guitar playing and unforgettable songs. For years I have heard the B52s described as one of the worlds greatest party bands and there is absolutely no denying the truth of that but I have always felt they were just one of the greatest bands. Whatever the alchemy is that makes a great band these men and women had it and in all likelihood still do. 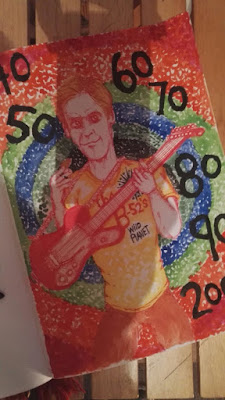 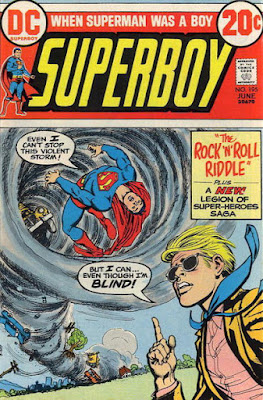 After one spends a lifetime, quite literally, reading comic books, thousands of them over the decades, one occasionally loses track of where one first read a story. Yet details persist,a stirring heroism, striking visuals that lift one way beyond the medium that birthed them. i often find myself wondering where I first came across a great yarn, did I read something first time around or catch it in a reprint or an anthology or graphic novel collection. Some of those stories imprint vividly and it is hard to distinguish whether I have read or possibly dreamed of the details.
Here is an example. I remembered reading a Legion Of Superheroes story. Way, way back in the day. Seventies Belfast to be exact. It was a story that involved some one attempting to join the legion and going through an audition process. I remembered a masked figure attempting to impress a gallery of Legionnaires that he had what it takes to become one of their team, that he had what it took to be a hero. I even remembered he had very tight red form fitting  trunks that alone would have guaranteed him a seat at the table if he had been asking me to join my gang. His bum had been tangoed.
Yet he did not get in, could not meet the exacting criteria for becoming a member of the Legion. The Legion puts great stead in singularity. Having a set of abilities or powers that bring uniqueness to the table. Each member possessed of a set of skills that serves to also identify them them, ie; Element Lad, Karate Kid, Lightning Lad,Shadow Lass, cosmic boy, etc. his special power, though considerable, could not be demonstrated and then put away again for later use. I remember thinking "Would not want to be judged by them, I have nothing special going for me." Its a common enough thing among boys of the age I was then.
Anyway, by the end of the story he had proved them wrong. Not only demonstrated he had heroic qualities in spades but also  demonstrated a most singular power. Tragically singular in the most important respect. I remembered reading this story but not where. I knew it was a back up story, or at the very least was inside another title. For the longest time I thought it was most likely in one of the legendary 100 pagers of that period. So many archival DC stories I would not have otherwise read had it not been for them and a bunch of them remain high up on my long list of best read comics ever.
The comic recently came my way again and I thought "Ah, there you are! The Superboy story was entitled The Rock N' Roll Riddle. How did I forget that? I thought to myself. A good enough yarn in its own right but it was the back up Legion Of Superheroes story with its themes of heroic self-sacrifice that really echoed through the corridors of my memory house...
And off course the mighty buns of steel our hero displayed in the title panel of the story.
"The One-Shot Hero." 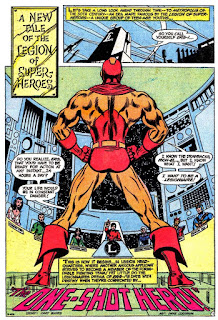