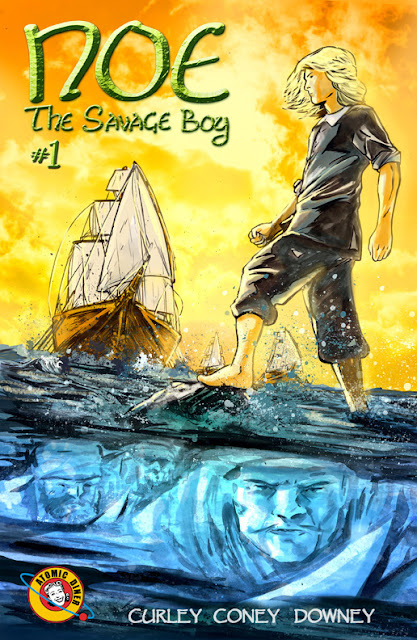 Hey ho here we Go. Here's the cover for a new comic I have been working on for the Irish comic book publisher Atomic Diner. It is the first issue of a three part series about the traumatic life of a sixteenth century Irish boy Called Noe. It is based on actual historical events from an idea by the Atomic Diner editor Rob Curley. At his invitation I have adapted that idea into a thrilling adventure yarn illustrated by Stephen Downey(artist on one of my favorite titles at the moment Jennifer Wilde).

In 1631 the occupants of a small fishing community in the southern most extreme of Ireland vanished overnight. The Sack of Baltimore, as it became known, was carried out by Algerian pirates who spirited away all the people of that village to the North African Coast where they were sold into slavery. It is a really heartbreaking tale of desperate inhumanity that is all the more breathtaking as it is true. Imagine the headlines on the cover of the British red top newspapers or even the Web top headlines if such an event were to occur today.

Its the story of one family and their experiences. In the main it is the sons tale, Noe. How he goes from being an innocent boy to a savage warrior and ruthless assassin. Its the story of a family learning to survive against staggering odds and the unbreakable bonds shared between loved ones. Its about the bonds forged and formed in the face of adversity and cruelty at the hands of man.

I am hopelessly compromised but I believe Stephen has done some of his best work on this first issue. He has managed to bring to life a period and a location I do not remember seeing in a comic book before. Ireland in the sixteenth century. Page after page filled with a sense of a space and a time long gone by. The sight of the prow of the pirate ships cutting the waves and the wind in their sails. It has been a while since I last wanted to swash my buckle so ardently.

I have not written a history lesson though. It is first and foremost an adventure story even if  birthed in historical fact. As historical fiction it is not rooted in any particular genre either. I find life rarely is. Life is comedy and life is tragedy. Life is happiness and life is horror. I think the editor Rob thinks this too and he allowed me to take minor historical liberties for the sake of brevity in storytelling. Allowing me the full stops real life does not.

If you would like to read and see more Noe should be here soon.