December Will Be Magic Again. 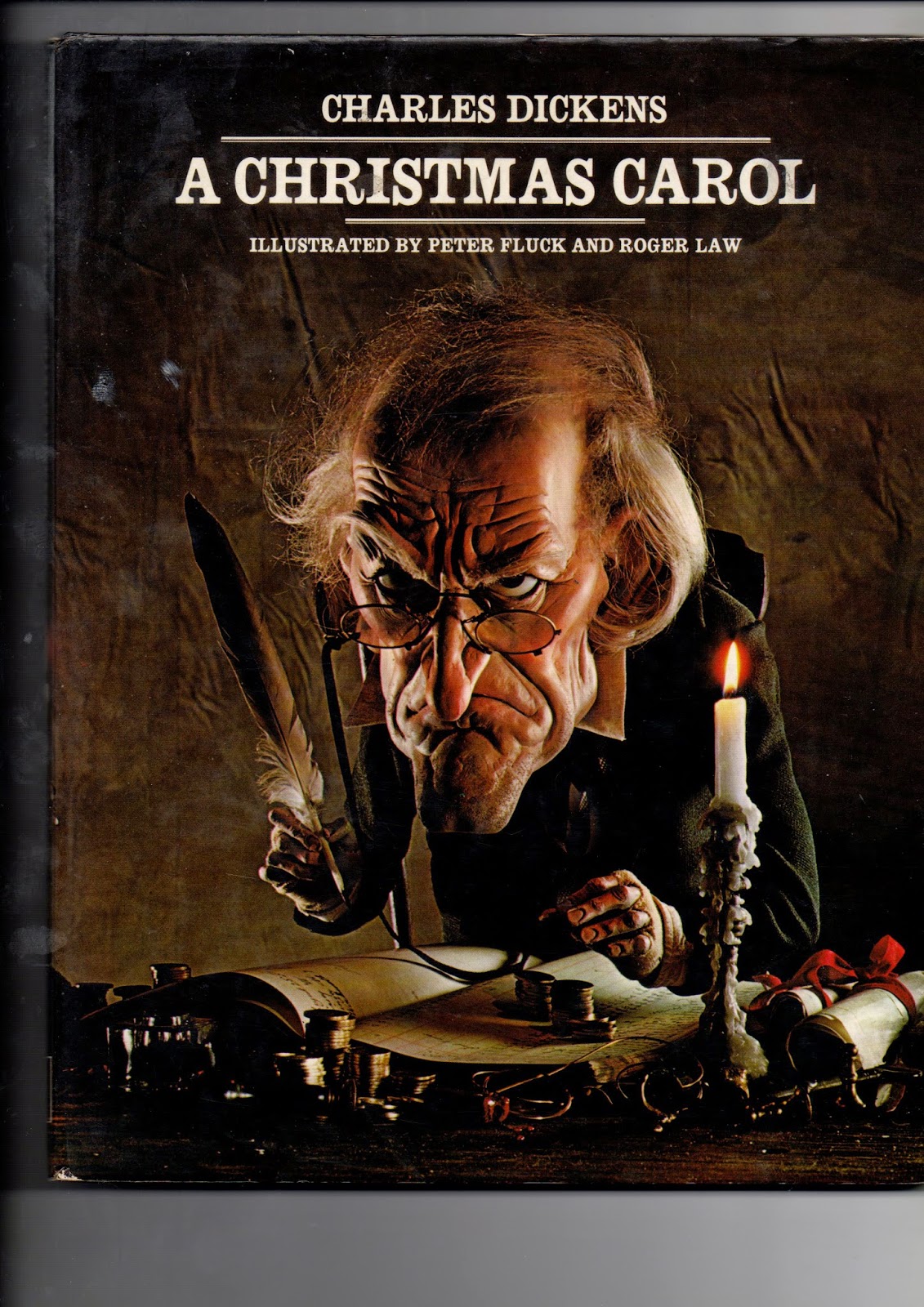 Well The Doctor was right again when he said that every Christmas is last Christmas. There goes another one just disappearing out of view. Whilst we are on the subject though and before we move past it for another year I would like to share some details of a December ritual one likes to indulge in(OH-ER!). I realise of course that such a statement is little more than a bloated conceit from one who is little more than a partially evolved ape-descendant but here goes. Anyway, every December just before Christmas, some times even a little after it, I reread Charles Dicken's A Christmas Carol and this is my favorite edition of that incredible wee book. A lovely hardback, one of the oldest books I possess, with the most stunning composed plates by the very talented Peter Fluck and Roger Law. I picked it up many years ago in Willis Bookshop in Calendar Street in Belfast. Another bookstore now long gone. It was one of those stores I used to haunt in search of Doctor Who Target Novelizations. Which was not an easy task as it sounds as I never had much money so if an item was not cheap I just had to do without it. Oh yes I had the freedom from possessions that comes with no income. I must have really, really wanted this volume because it was a whole four ninety five back in 1979. Mind you, A Christmas Carol is a story for the ages and it is nice to think one has a favorite version.
It was first published in 1843 which makes it exactly..er,well..it makes it pretty old.
But a tale that remains young at heart.
And what a heart. A big old dusty Victorian heart that still beats with all the vigor of a musical hall romp from the good old days...
My Old Man Said Follow The Van And Do'nt Dilly Dally On The Way! 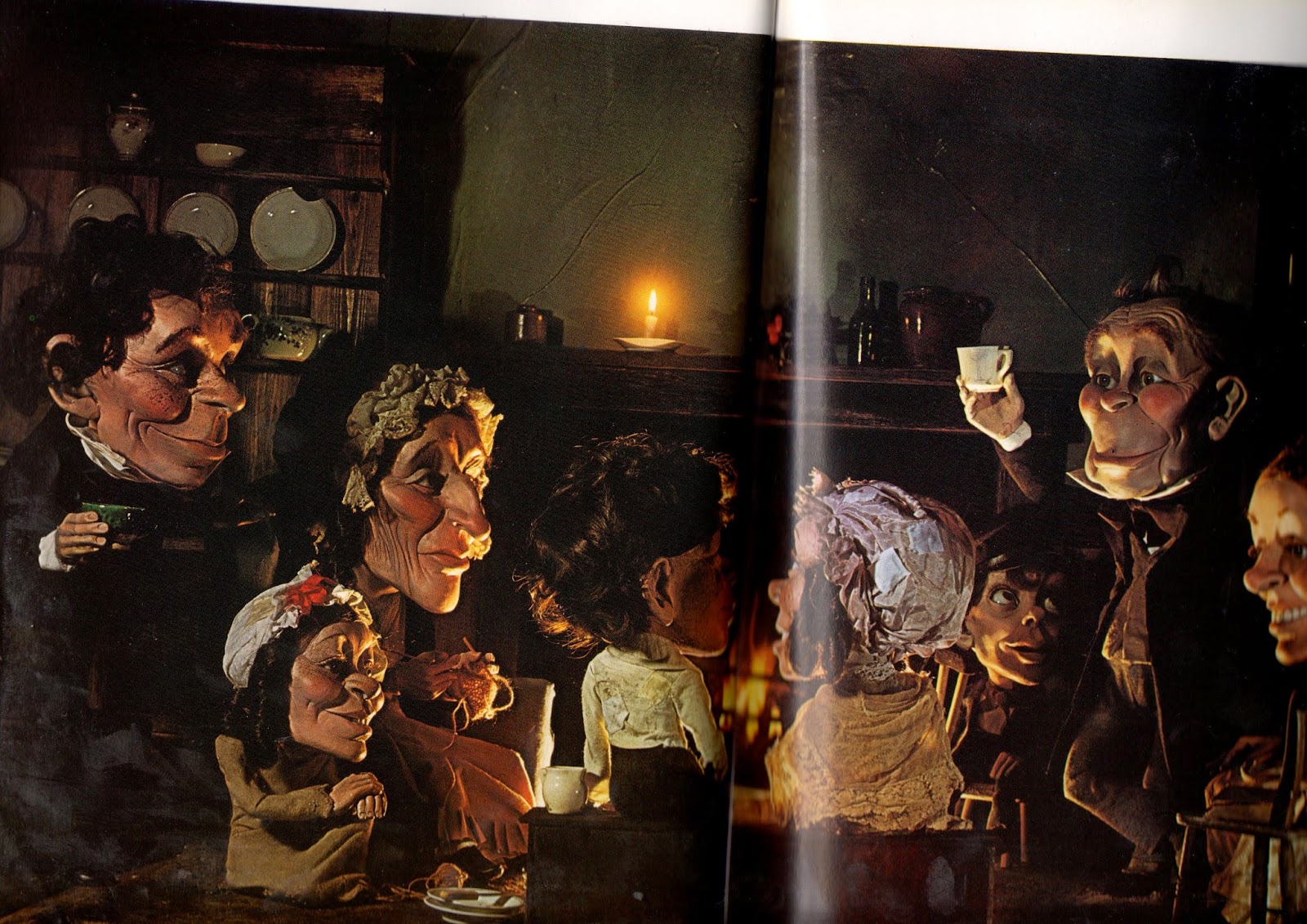 A Season Of Myths.

Noe Room on The Shelf. 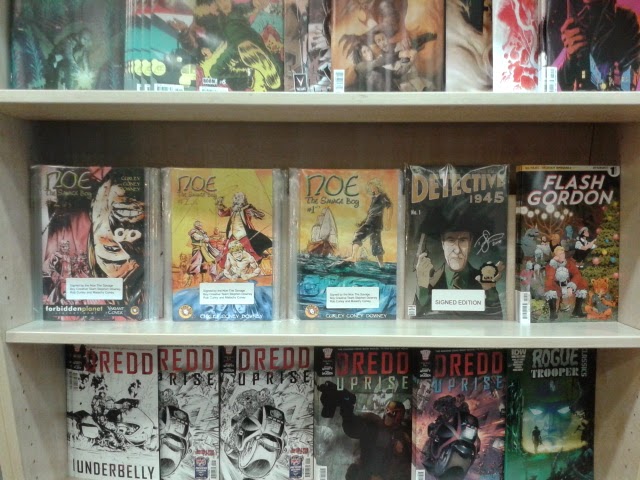 One of the very best things that I saw this December. My own work sitting on a comic book store shelf with Daryl S' 1945 and Stephen Downey's Noe and Flash Gordon Christmas Special. It was the first time I ever saw a shelf in a comic book store filled with the work of people from Belfast. Yes, it is a small shelf I know but it is still something to see sitting amid a forest of titles mostly grown in America.
It is not a starry alignment or a heavenly portent..
Just a beautiful sight for these tired old eyes of mine.
If you bought any of these and made it happen you made my Christmas.
Thank you.
Posted by Malachy Coney Curiouser and Curiouser at 11:43 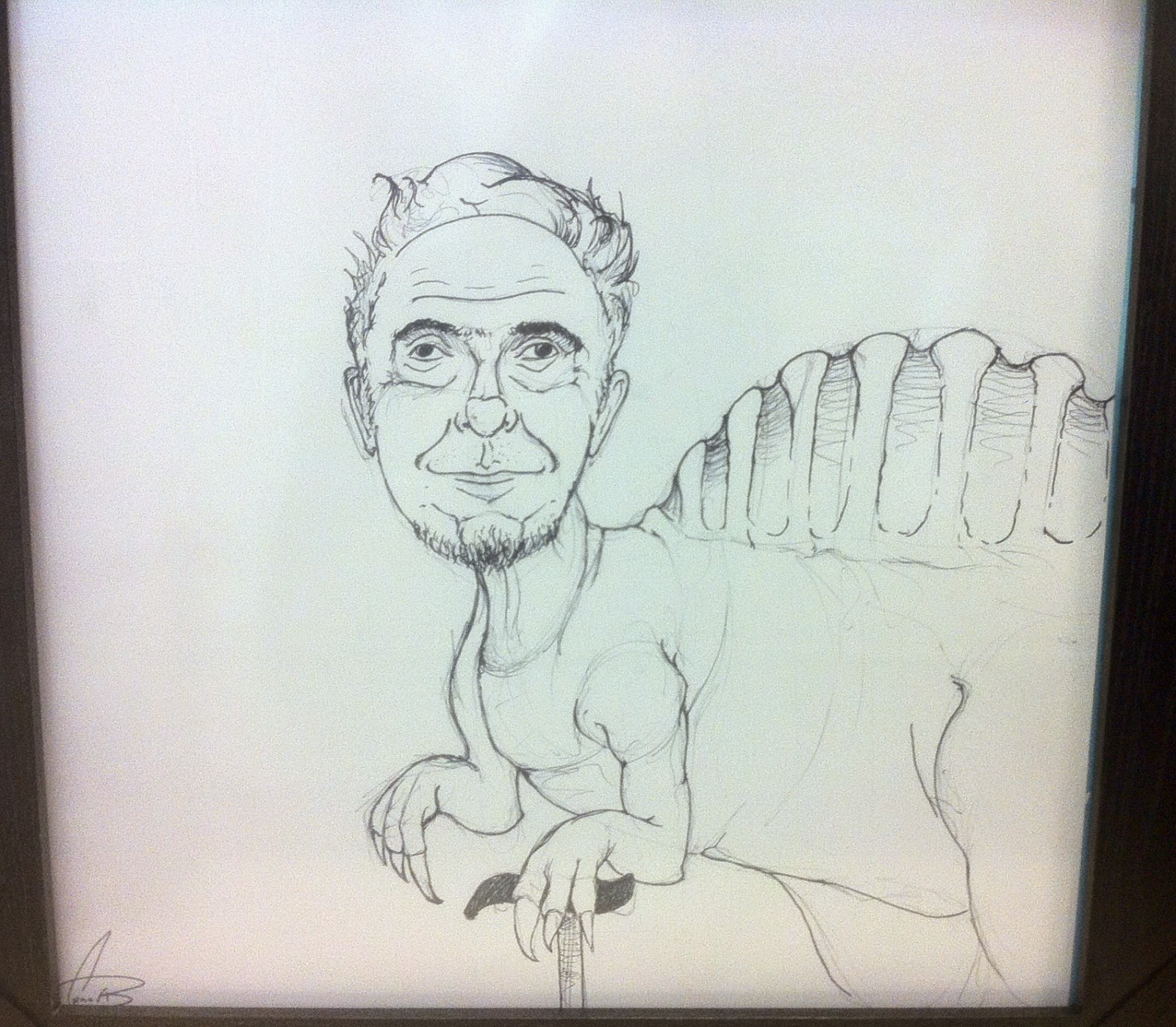 Tyrannosaurus Fop from the land before Timey-Whimey. Thanks to young Connor Barbour for this lovely..er,sketch of me.
But do I really look so old to young eyes?
Posted by Malachy Coney Curiouser and Curiouser at 11:42 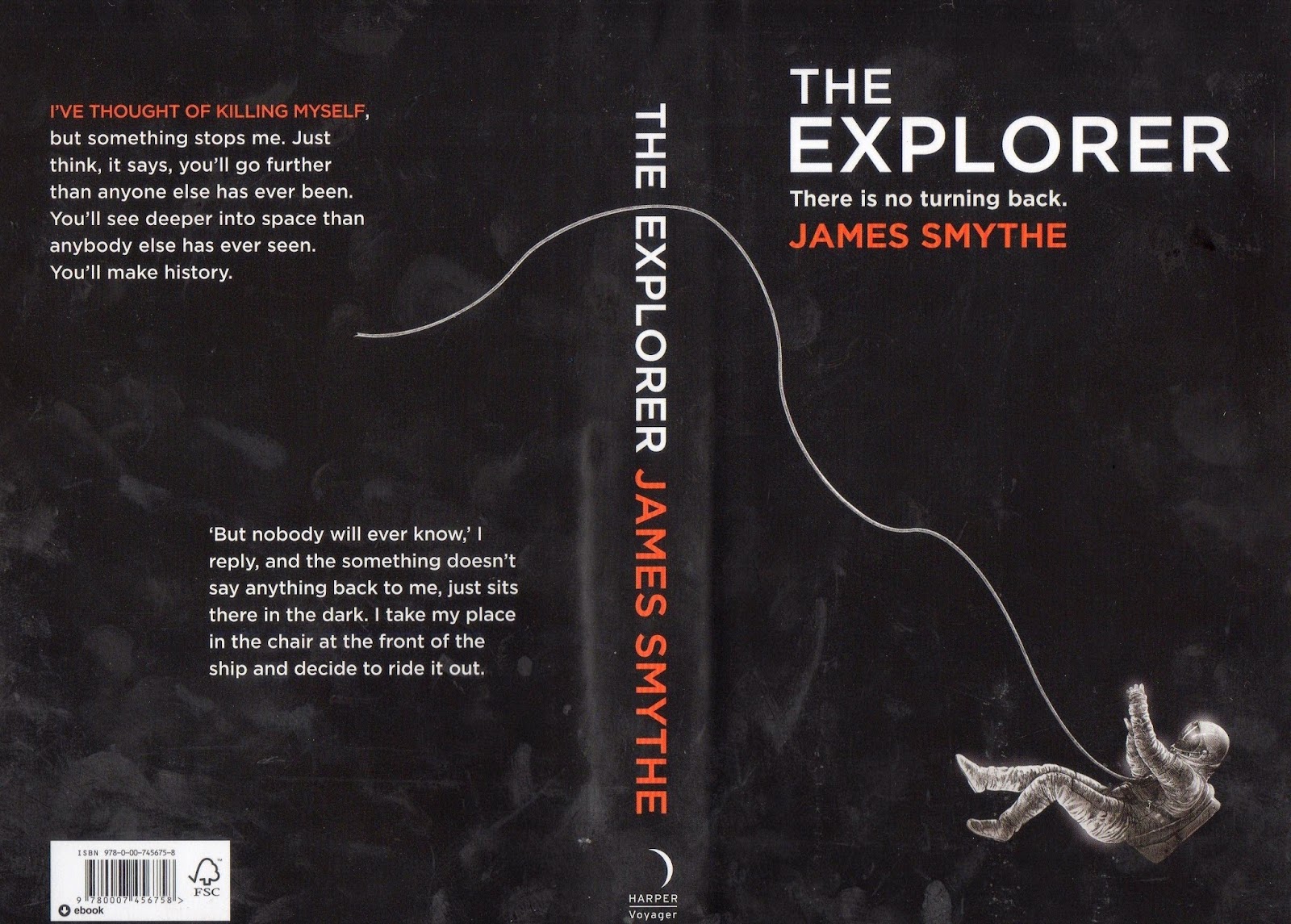 Wow, had one of those one sitting reads with this book by the author James Smythe; The Explorer. Picked it up to get a flavor for a later read and ended up having to see where it was all going( I am like that with pavlova;Just one more bite,just one more bite..)and I am glad I did. I went, I explored and I put that moment here. The tone is so melancholy and shot through with the blackness of the space between stars. What begins as a daring and heroic adventure to the very limits of man's reach becomes a timey-whimey ground hogs day of a nightmare.
When you are on your own in space you are really really on your own.
Or are you?
Posted by Malachy Coney Curiouser and Curiouser at 05:15

Breakfast Time 1977 All Over Again. 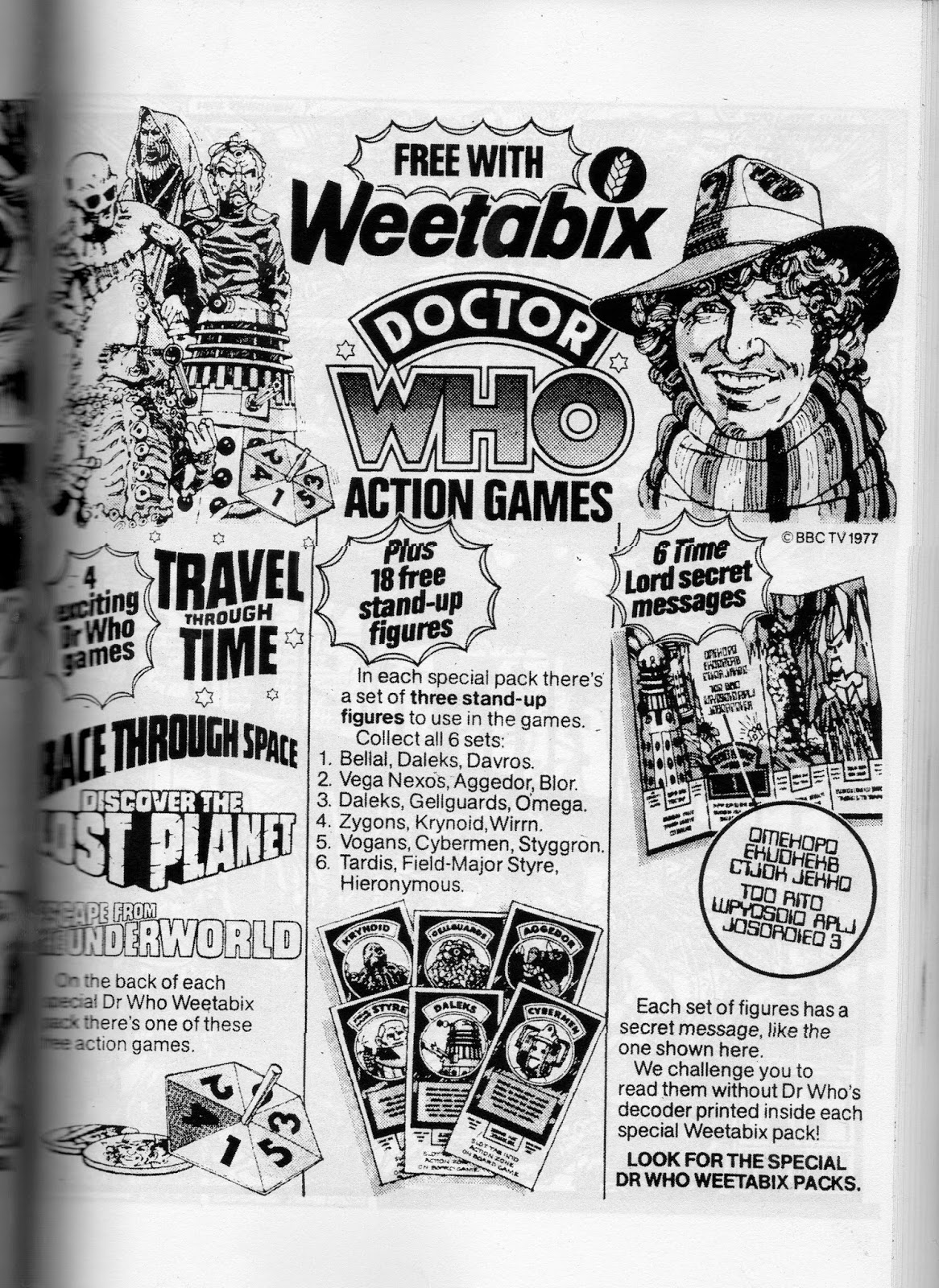 Off course growing up in the Catholic Ghetto of Ardoyne at the height of The Troubles me and my mates would have considered the Wheatie goodness of Weetabix little more than a bourgeois indulgence. We would have breakfasted on a bowl of history washed down with a steaming mug of nationalism. This was such an exciting ad though glimpsed in an issue of 2000AD Weekly(the greatest British comic ever produced) in the April/May of the year 1977 whilst Doctor Who(the greatest British television show ever produced) was at the height of its powers. An ad so powerful it would have tempted me to eat Corn-Flakes(the most boring British cereal ever produced.)
Posted by Malachy Coney Curiouser and Curiouser at 03:29 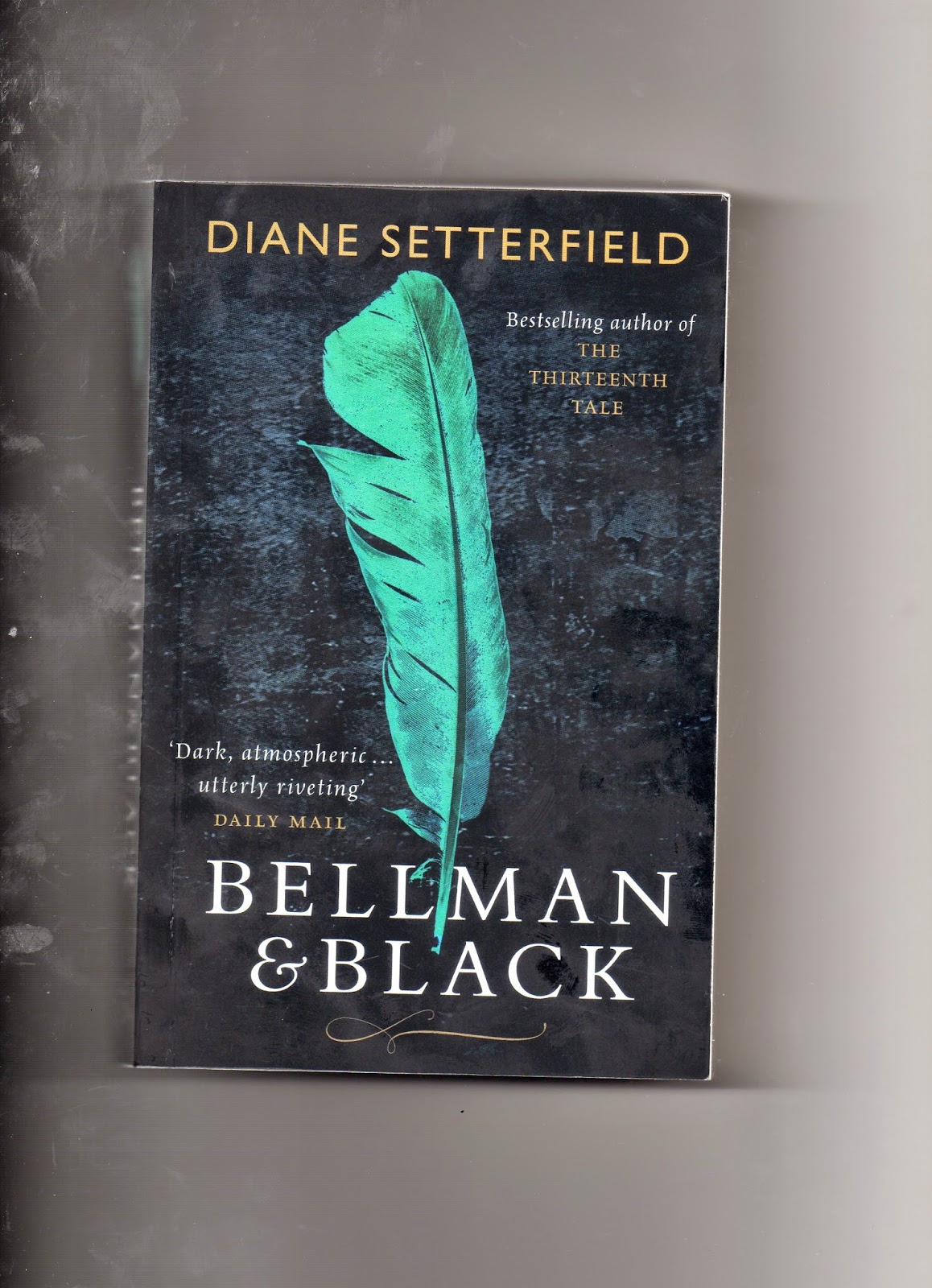 Last Christmas I watched a real atmospheric BBC thriller called The Thirteenth Tale written by Diane Settlerfield .A story about stories within stories and the threads that weave a life together and about how dangerous it is to pluck at those threads. How reason may unravel. it hinted at how the influences that endow certain stories with a chilling edge are sometimes born in dark corners of the mind. A fading author has one tale left untold and the time has come to tell it. It was one of those wee gems you find around this time of year when certain repeats have you grinding your teeth.
I learned Dianne Setterfield had also written this; the intriguingly named Bellman And Black. I picked it up thinking it was going to be a ghost story set in a Victorian Flour Mill. It turned out to be so much more. It turned to be the tale of a haunted lifetime. This book was so beautifully composed and almost poetically realised it could not help but impress. The period, the attention to detail, draw the reader into a world now long passed. We also witness the power of self reinvention and the disintegration of a once powerful personality and the harrowing effects caused by delusion and distress.
Rooks, Crows, Ravens, all manner of black winged birds populate the narrative. Caw-cawing their way out of the shadows. After reading this book I feel I know a lot more about birds than I did. Although I now feel I know even more about Victorian funeral arrangements. That vast sense of elaborate  mourning.
I may well take to the black to mark finishing this melancholy missive for the life of a man who made death his business. 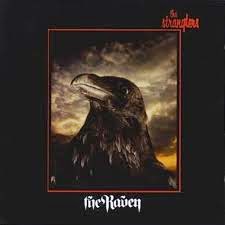 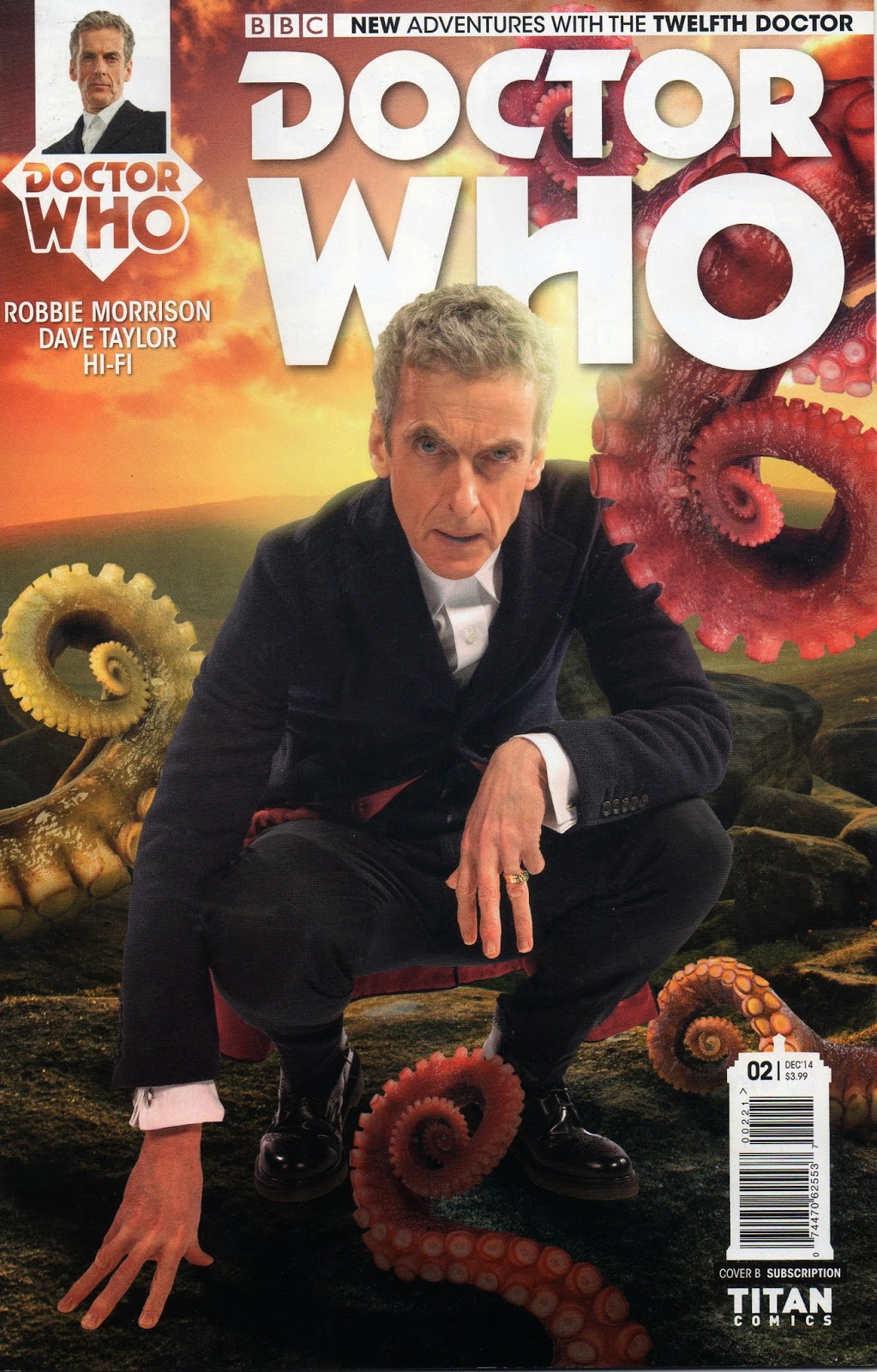 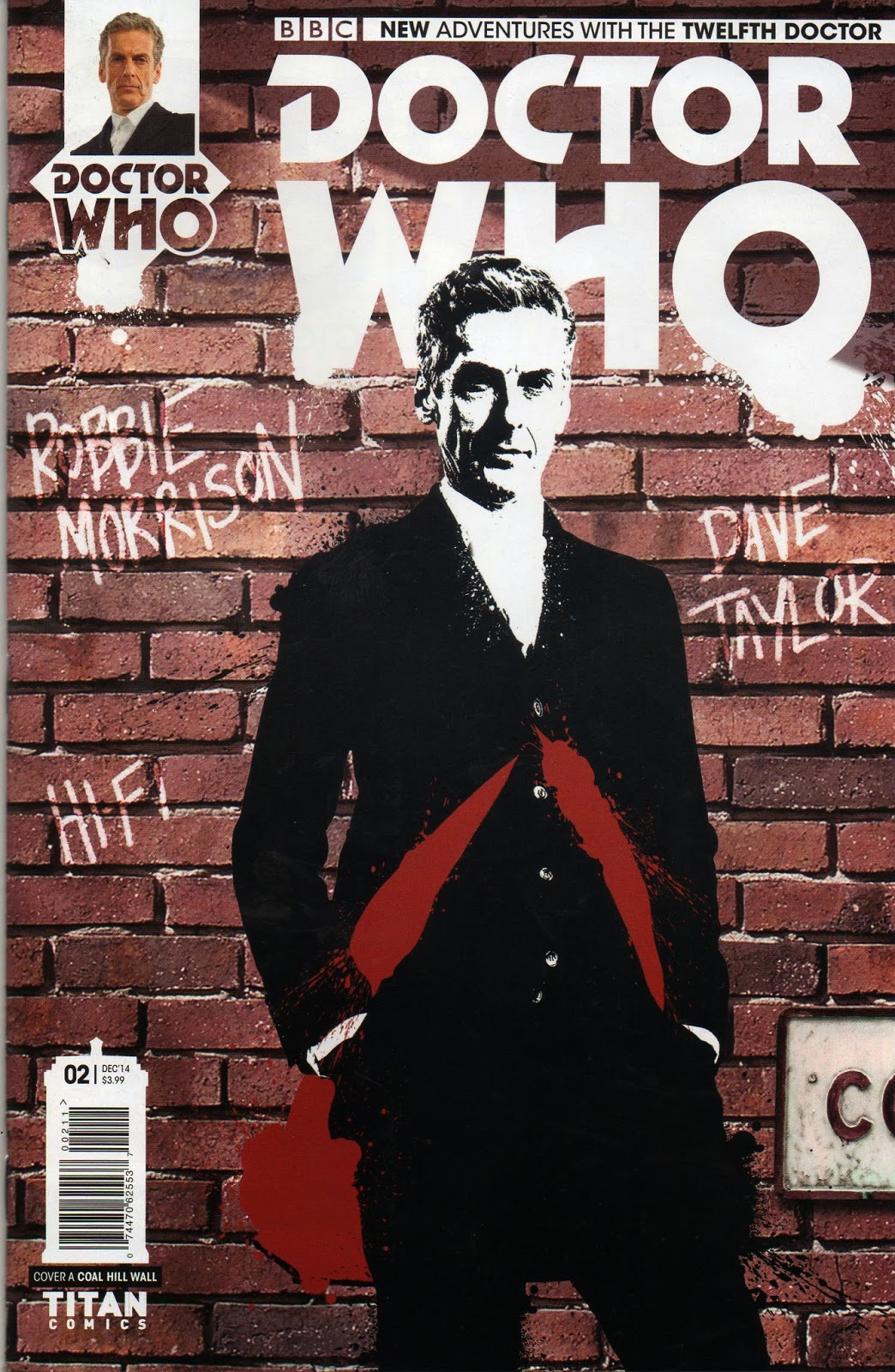 Wow. Check out these covers. Issue two of the new Titan Capaldi Who. Just amazing. Love how the second looks like an old punk album or the cover of an Ian Dury album.
Ian Dury.
Now there was a diamond geezer.
What A Waste was one of the first singles I ever owned. I used to play it and Germ Free Adolescence by X-Ray Specs over and over. On an old monogram record player that made everything sound like the sound track to The Clangers.
And who says all progress is positive.
Posted by Malachy Coney Curiouser and Curiouser at 03:51

The Demon Down Our Street. 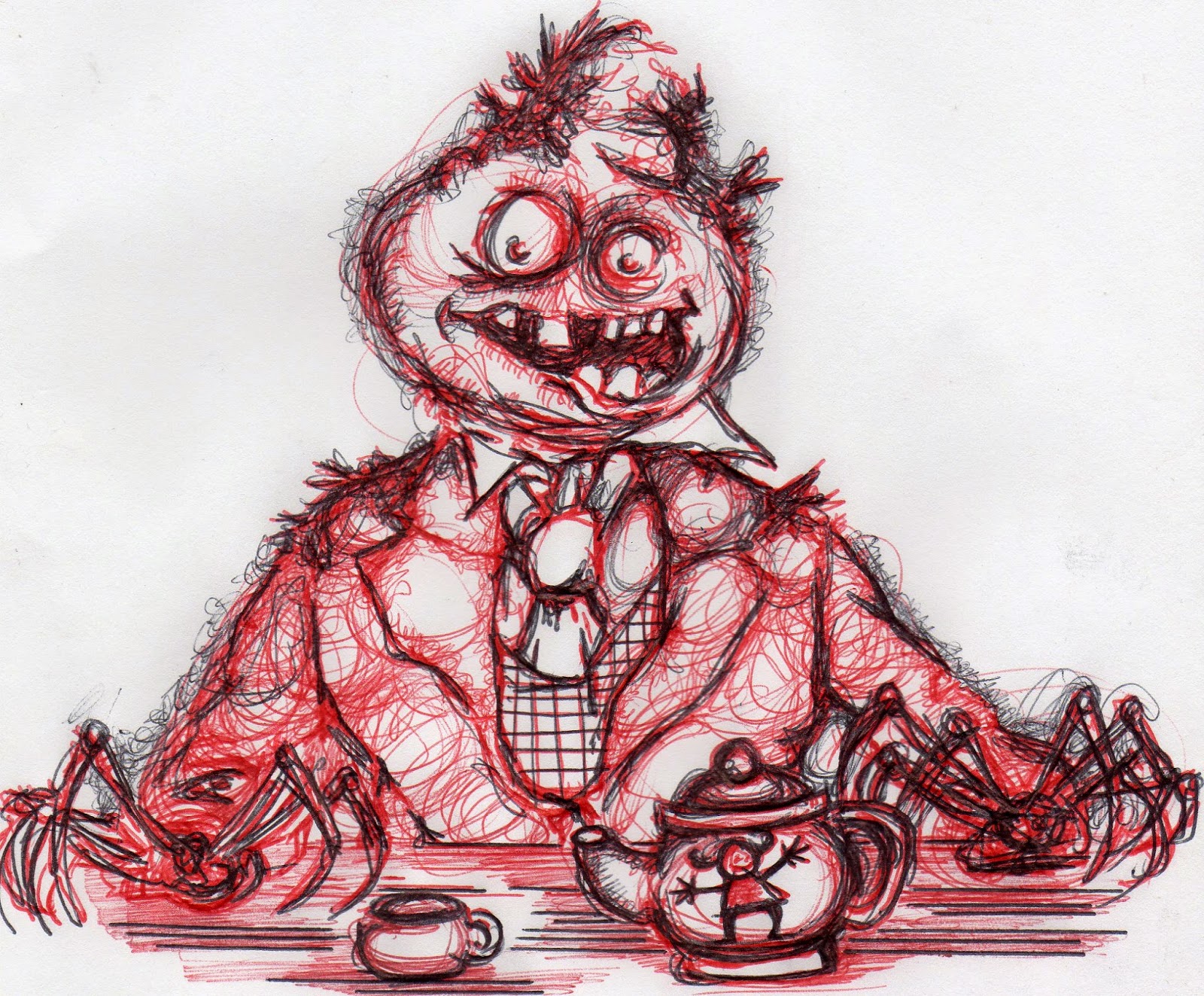 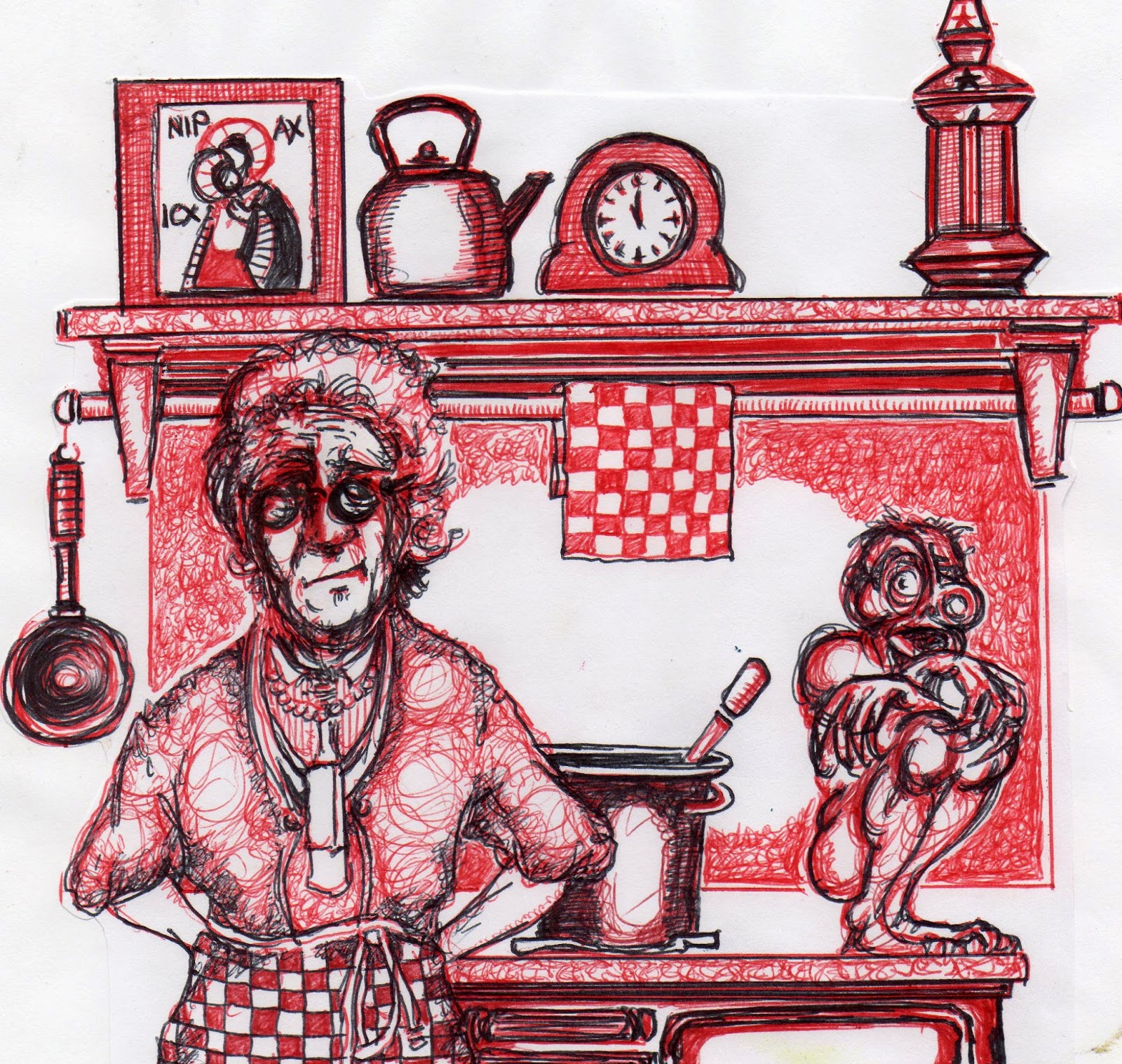 (From my sketchbook)Meet mister Harry Webb. He is a character from a short story I have written called Wyrms In The Milk. About a warlock living on a back street in Belfast. The second drawing is the heroine of the piece Ms Agnes Rocke. She is not just some harmless old lady. She is the only one who sees Harry Webb for what he truly is.
Anyway,thought I would share a bit of a work in progress.
Hope it does not put you off your bedtime coca(Whilst your are listening to the shipping forecasts on the BBC World Service. Sterling Chaps.)
I let a friend read it and he said he will never drink milk again.

Run!Its The Tribe Of Gum! 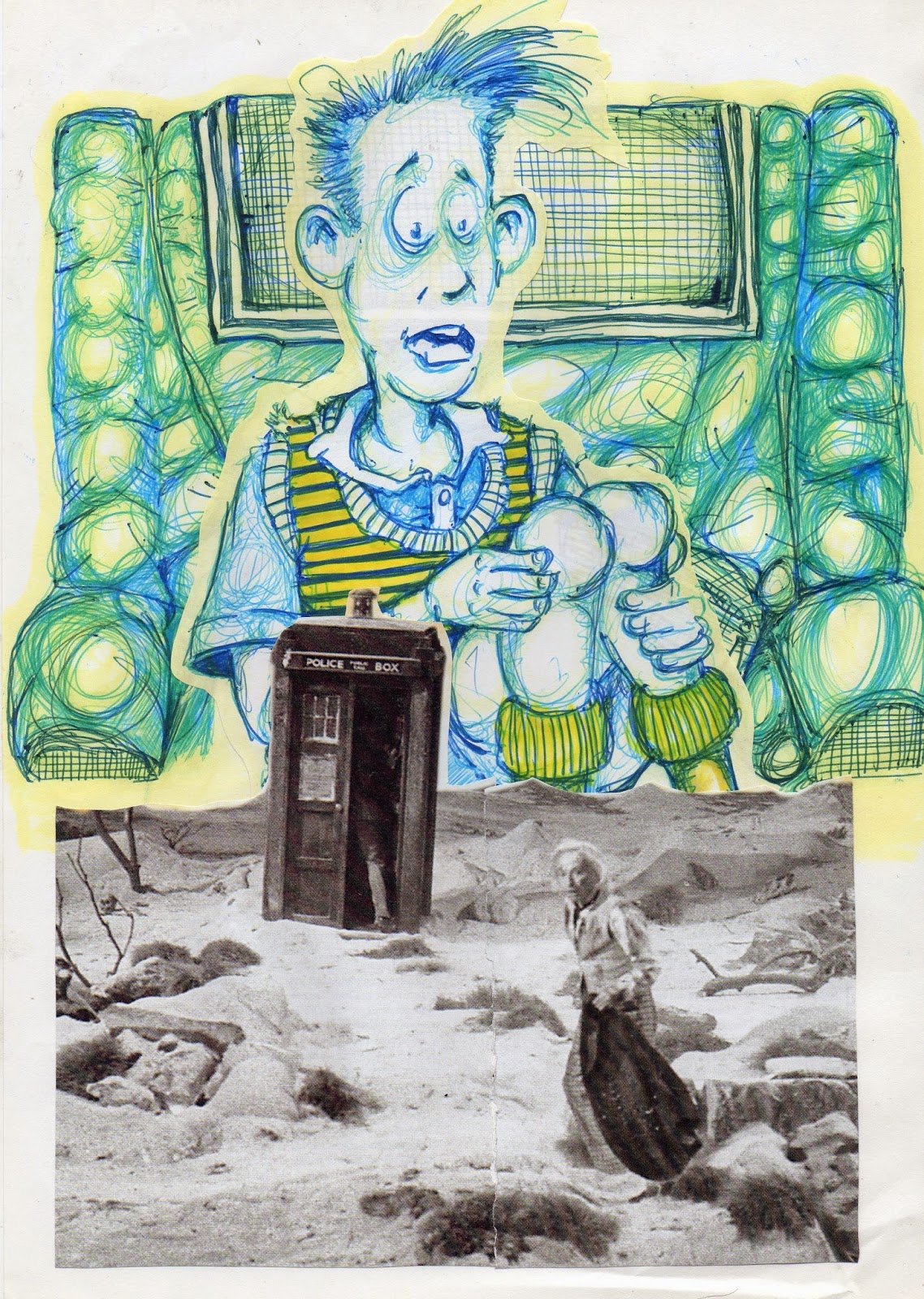 ...With the safety of the Tardis within reach The Doctor paused breathlessly and looked back for signs of the pursuing cavemen of the Tribe Of Gum. With a resigned sigh he thought to himself
WHY DO I HAVE THE FEELING THIS IS JUST THE BEGINNING OF A BEAUTIFUL RELATIONSHIP?
A hail of spears and stones answered his unspoken question.
And he ran for his life.
Posted by Malachy Coney Curiouser and Curiouser at 07:48 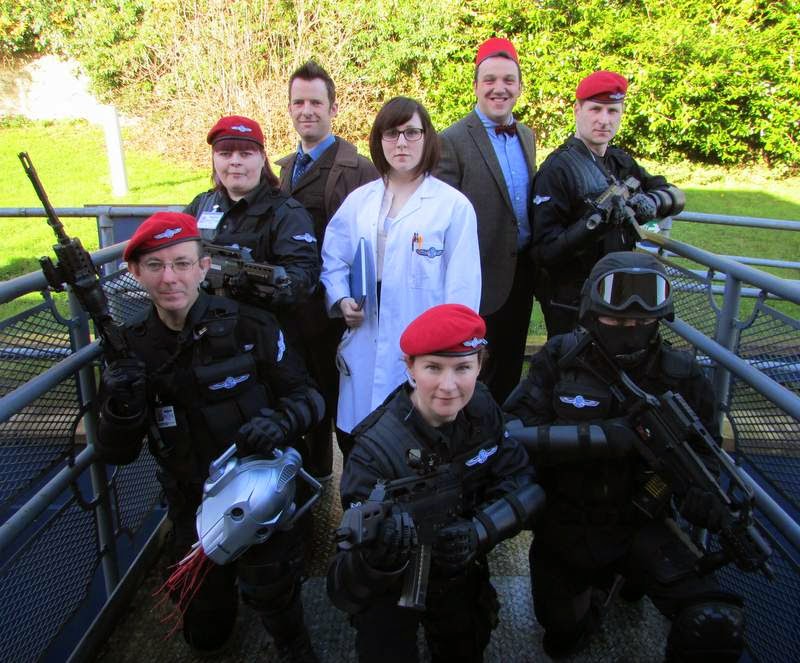 Unusual
Northern
Irish
Task-force.
UNIT.
Death spitting plastic daffodils? Shape shifting Giant Alien Ugly Baby Faced Zygons??Polymorphous energy sucking tentacle covered Axons?Taking on whole armies of Sontarans with anger management issues? You name it this group have dealt with it. Nothing is too unusual for this group to handle.
Question is do you have what it takes to help them in a semi-regular decades spanning outward appearance changing capacity?
Exiled to Planet Earth in one time zone brilliant minds status welcome but not compulsory.
Posted by Malachy Coney Curiouser and Curiouser at 07:32