Out Of My League. 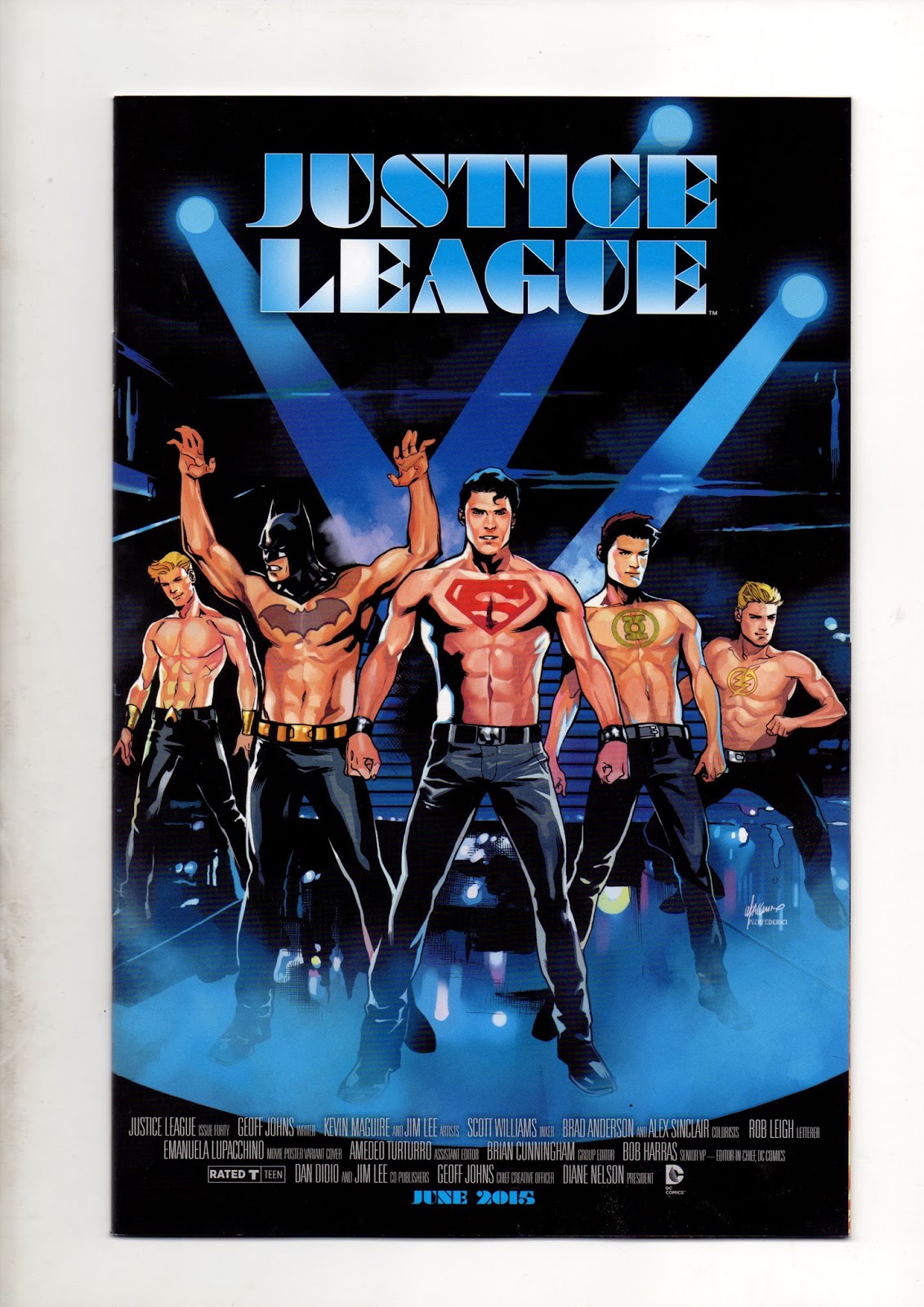 The men with no time for crime!
"Think clean thoughts, chum."
Posted by Malachy Coney Curiouser and Curiouser at 07:50 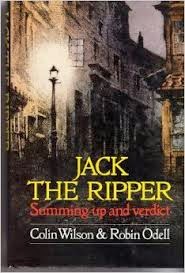 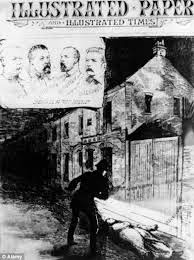 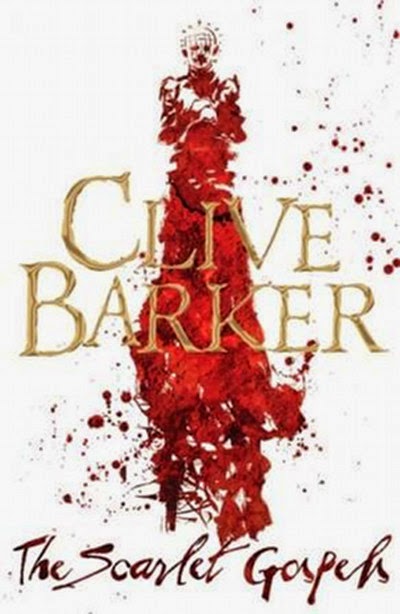 Clive Barker has finally gotten round to putting pen to paper to write about his most infamous and enduring creation the lead cenobite of The Order Of The Gash himself.
Or Pinhead. More of a description than a name I suppose but hardly even an accurate one. Surely Nail head or even Nail face would be more appropriate. I do not think that Clive Barker ever got around to giving him a name other than the description itself. What a striking appearance though. This demon/hell priest summoned from Hell by the act of adjusting the configuration of an elegant little puzzle box. A veil between worlds becomes sundered and through it step these visions from a fetishist purgatory. The creations of a brilliantly imagination which are at once as horrifying as they are compelling to watch and listen to. This creature is not your usual shambling monosyllabic blood drenched monstrosity it is instead all the more disturbing given its thoughtful and even elegant turn of phrase.Yet to the best of my knowledge Clive barker only ever wrote about him in the Hellbound Heart the novella that formed the basis for the whole Hellraiser mythology launching a thousand lament configurations.
I managed to read an advance proof of the new novel The Scarlet Gospels in which another Clive Barker creation Harry D'Amour descends into Hell itself to rescue his stolen friend Norma Paine from the clutches of the Hell priest himself who has set in motion a plan to take over that benighted region. In return for her release this high priest of abomination requires something quite specific of Harry D'Armour and harry is not the sort of man to be bound by Faustian deals. Yet it will stretch his considerable wits to their absolute limits if he is to survive this pilgrimage to lands where the living were never meant to walk. It is a book filled with wild magic and horror and is also something of an epic Yep, two of Clive Barkers bastard creations come together in a crimson bouquet of blood and tears in a quest to the territories of torment. These two creations have come a long way down a dark path strewn with the bones of different mediums, films, comic books and novels. From the distant days of The Books Of Blood  and The Last Illusion for D'Amour and The Hellbound Heart For the man of nails himself. Decades have passed since both these characters were introduced and both have proved to have a life beyond their fleeting first appearances. The cenobites in particular proving to be something of a merchandising phenomenon as over the years we have seen action figures and toys of myriadly startling compositions. Frankly, some of the most disturbing "toys" ever produced  have been directly inspired by the feverish imaginings of Clive Barkers darkly fertile thinking.  Plastic creations surely intended to populate some hellish nursery.
Do you ever imagine mushrooms springing to life through dark soil illuminated by something other than the light of day? I think some ideas are like that. They require no sunlight to germinate, to reach their best, are the buds of flowers grown in goblin soil.
That is Clive Barker for me. A gardener in The Fluer De Mal.
A rosemariner in the garden of evil. 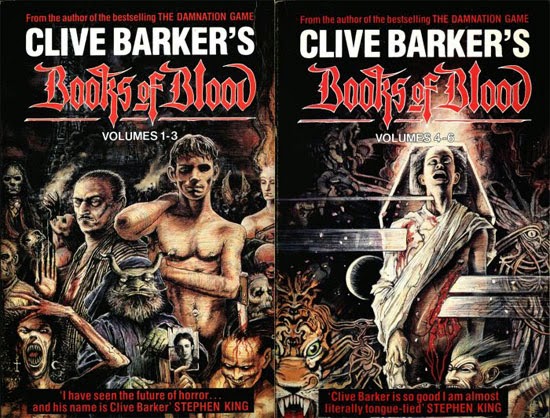 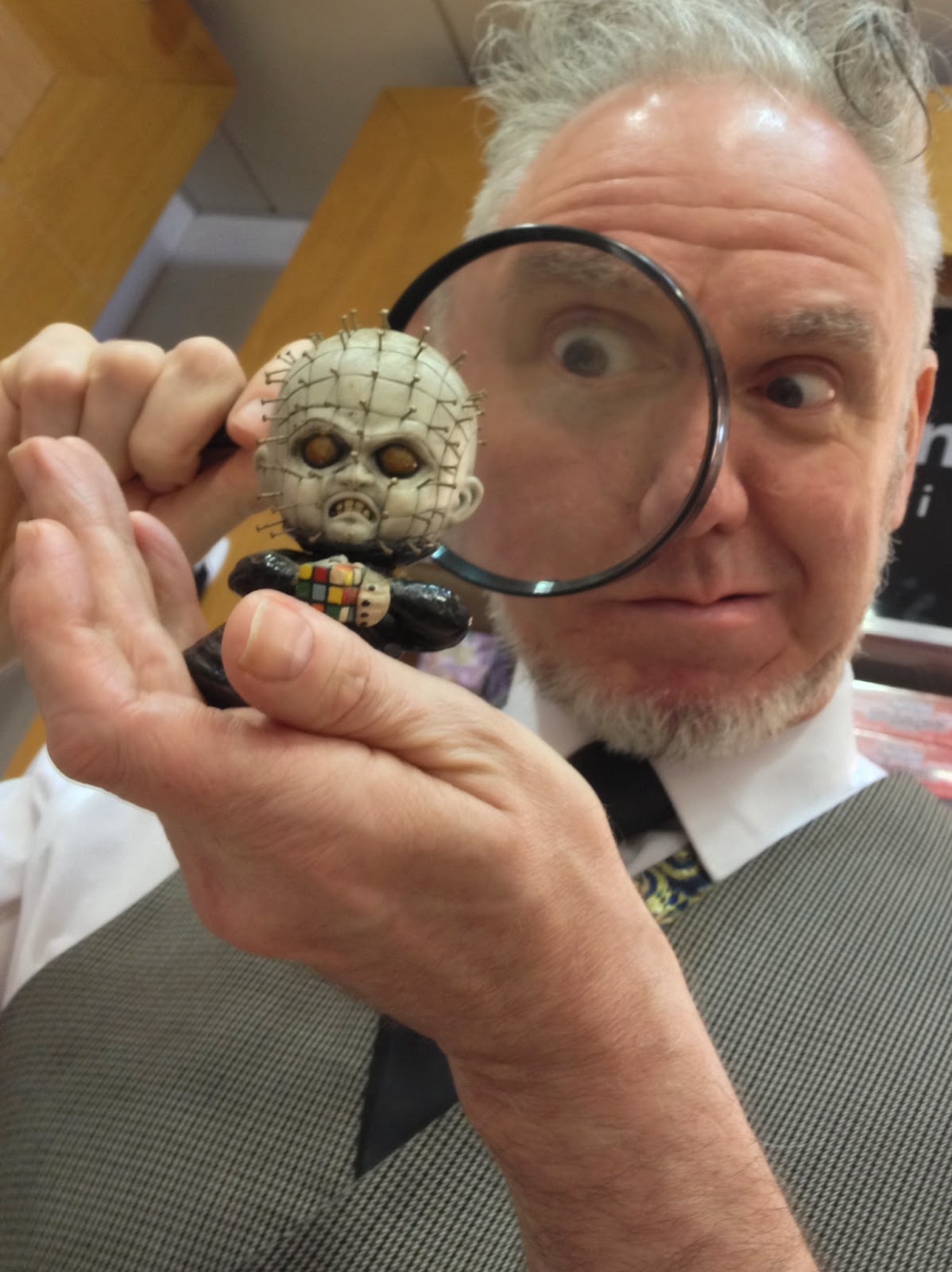 Pinhead?
Nail Face?
Hell Priest?
Did Clive Barker ever actually name his most infamous and enduring creation?
I did. I call my wee Cenobite Niall. 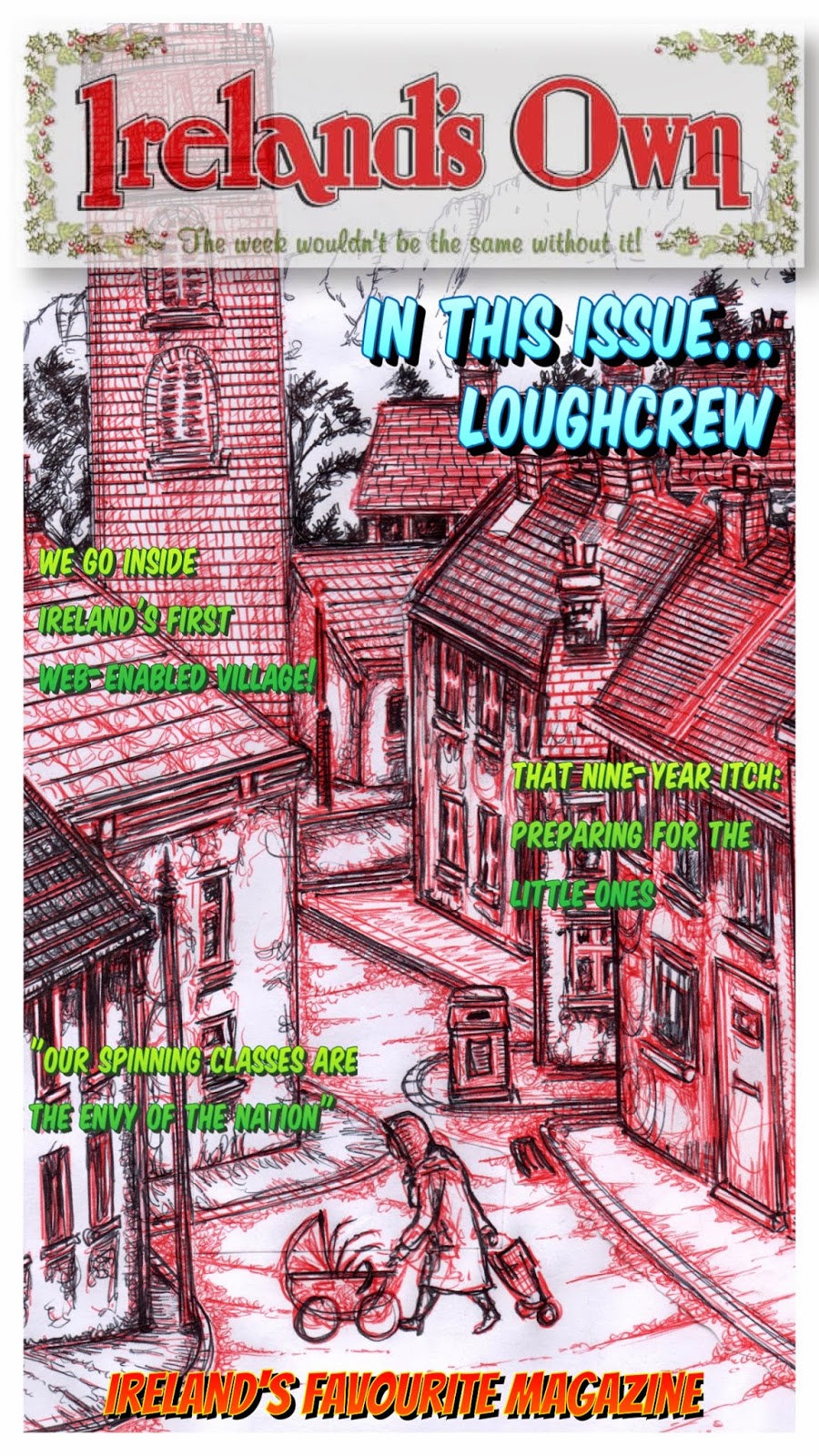 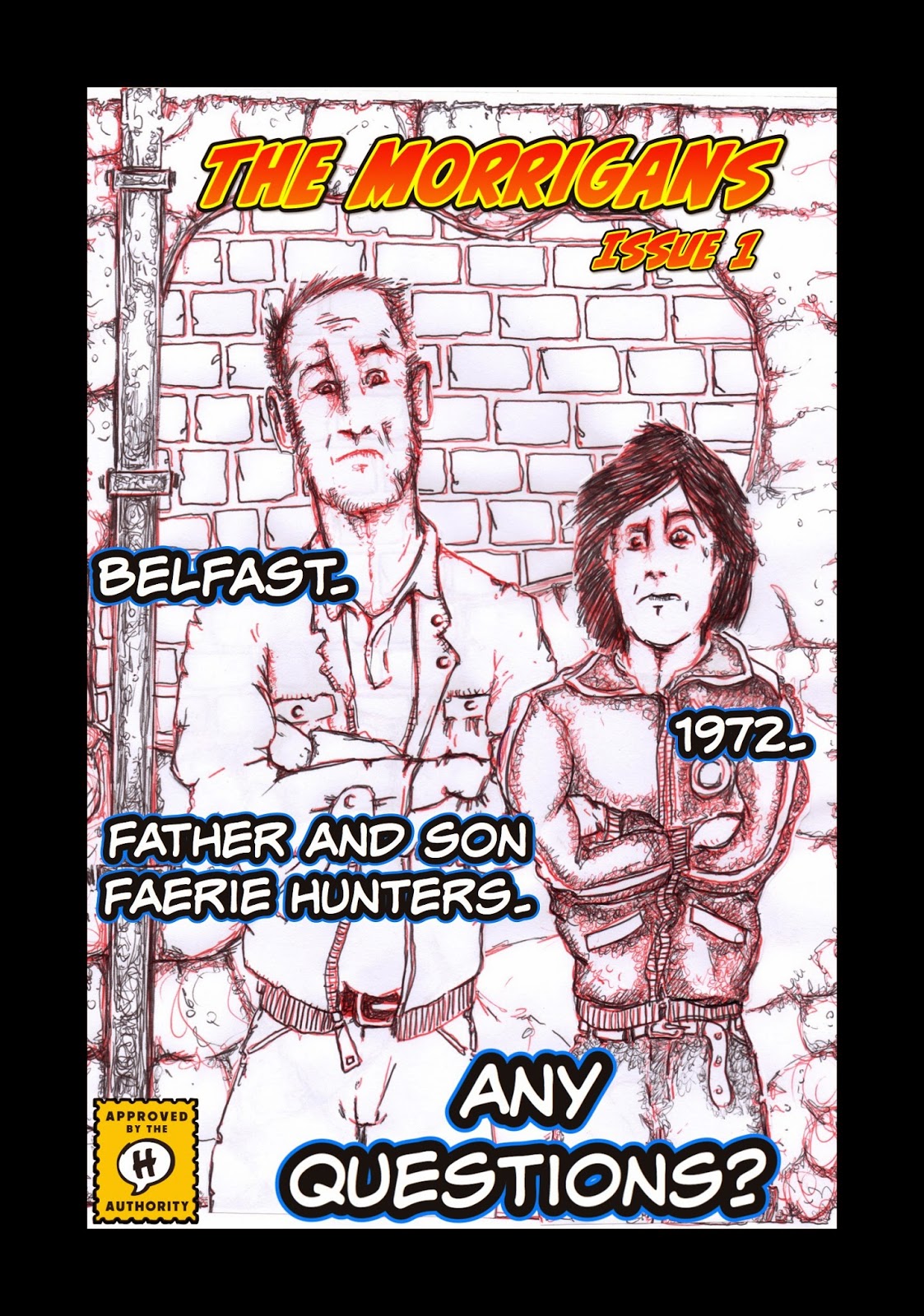 I did a couple of drawings, at the authoor's request, to accompany a great Folk'd short story/novella by Laurence Donaghy called Village Of The Folk'd. A stunning wee tale that turned my spine to jelly and which built  to a nail-biting conclusion. If you were one of those people who ran out of the cinema screaming when Shelob tried to turn Frodo into a Hobbit kebab you will struggle with this wee nightmare yarn. Set in 1972 it expands on the Folk'd mythos in a way that will surprise and entertain in equal amounts.
Laurence, being the innovative person that he is, turned my drawings into a pastiche of the much loved Ireland's Own and into a comic book cover which possibly exists as a full issue in some alternate reality. He green lighted the use of them for my own page so here they are.
If you have as yet not tried The Folk'd books today would be a good day to start them.
And you will have them finished before you know and probably find yourself on a quest to read this great wee one-shot story.
Keep your eye on Laurence's web site for details of its availability. 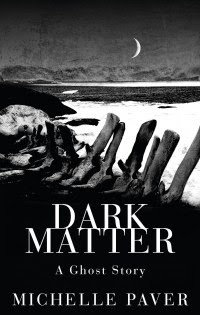 Just read the most haunting(No pun intended)ghost story I have read in some time. A real Boys Own Yarn telling of an Artic expedition, a journey to the land of the midnight sun(What a fantastic expression.) which becomes a teeth chattering tale of terror. Twenty eight year old Jack is a lonely young man determined to better his life and break free of his inner city isolation by engaging in a scientific adventure in one of the loneliest and remote areas of the planet. The year is 1937 and the world is about to plunge into the most horrific conflict in the history of humanity. The eagerness with which the five brave young men embark on this expedition is a mirror to youthful optimism which is about to endure a world wide seismic shock that will change it forever.
The Bay Of Gruhuken is a haunted shore and what walks there is a wretched diseased spirit twisted with hate. An almost primal fury manifest as a dark shape in a land filled with silhouettes.
I loved this book and yet came across it quite by accident whilst searching for a book of an altogether different hue.It has made me remember the great classics I discovered as a kid. Books full of adventure, telling of journeys through distant lands, unexplored jungles, misty mountain tops, mysterious coral islands. A classic tale that feels thoroughly modern and actually delivers on the promise extolled on the cover jacket.
Dark Matter has that unsettling quality Alien has. The way the crew of The Nostromo drifts through space towards a wind swept nightmare landscape where something dreadful lies silently in wait. The lonely Artic Michelle Pevin writes off feels very real as does the character at the center of events Jack. Poor lonely Jack. My heart ached for him as he scribbled frantically in his journal not knowing if anyone would ever hear the voice screaming in his head. Not for the first time I felt myself falling in love with a fictional character. Mind you, I do not think I would have the courage to trade places with him. The thing padding softly behind him is too terrifying to contemplate.
Give this book some time and a space in your collection. You too will feel the icy touch of the unquiet soul that haunts the shadowlands of Gruhuken. 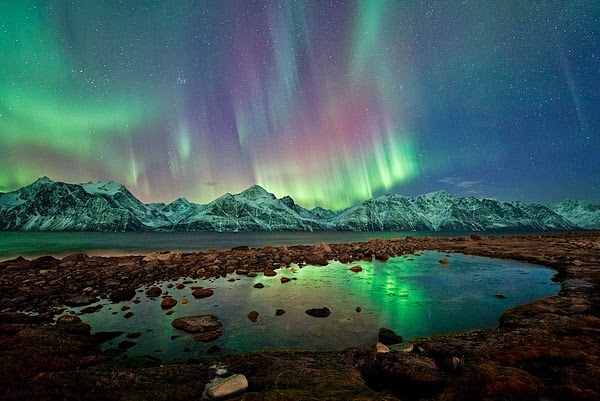 You Know You Love To Hate Him.And Her. 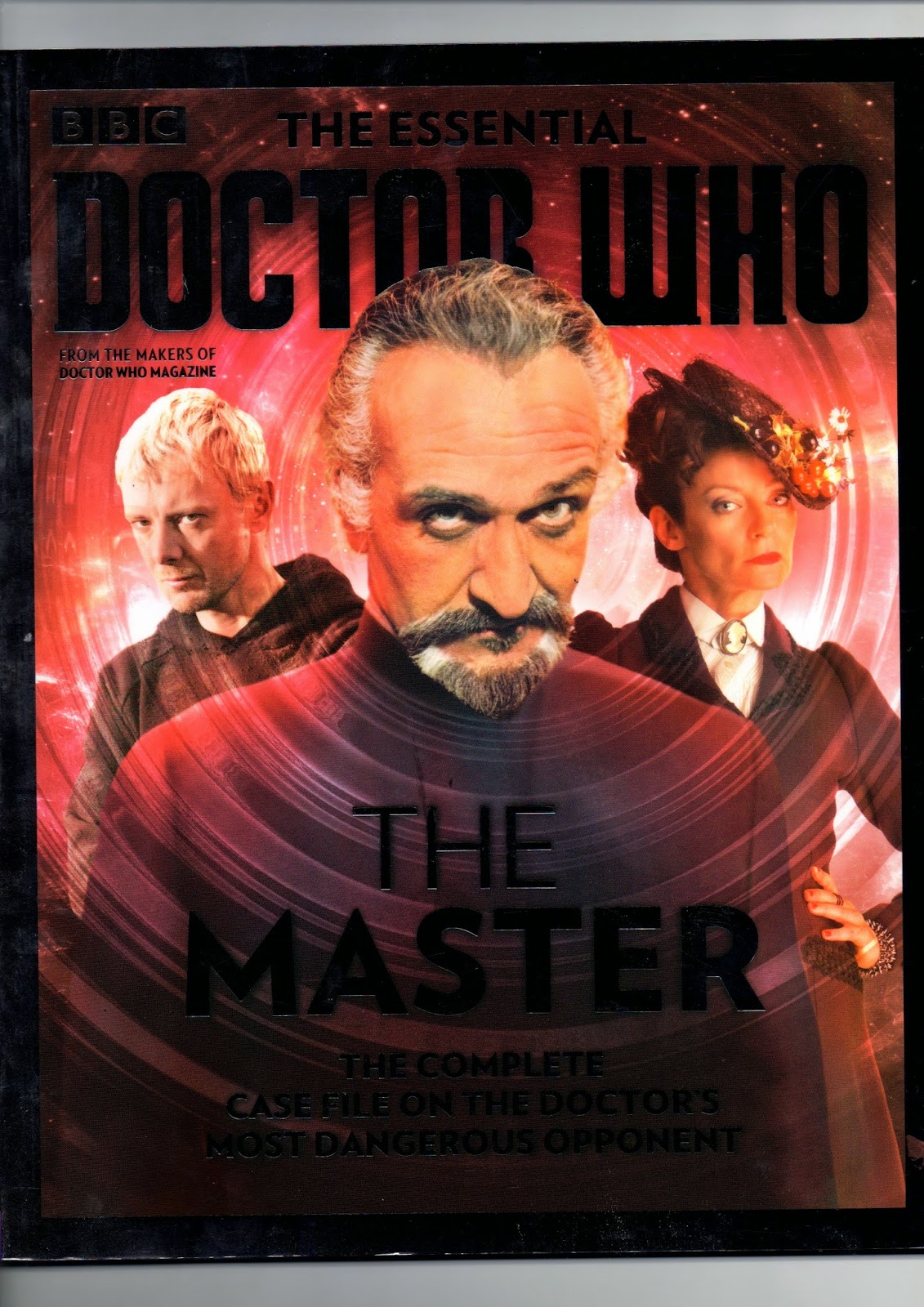 No Tardis library is complete without a copy of this new publication. This Masterful Tome is a complete and comprehensive history of The Doctor's oldest chum and possibly deadliest enemy. From the swarthy Charm of Delgado through the leprous madness of Beevers to the head scratching nuttiness of the Poppins like Gomez every rotten box is ticked.
He..Er, She is The Master..
You will obey him..er,Her!