The Man Who Fell To Earth And Landed In Lisburn. 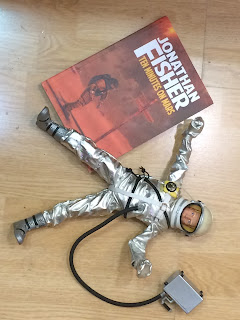 Just finished this collection of stories by the Northern Irish writer Jonathan Fisher. It is a loosely linked anthology of eighteen stories set in a nightmarish ghost of Roysten Vasey like location; Halloween Town.( A singularity in Hell, as Jonathan describes it.) I was reminded of those amazing Ray Bradbury anthologies I used to pick up many years ago in Harry Halls Bookshop. That initial impression created by the beautiful painted cover by artist Paul Malone.Although as I progressed through the book that impression fell away as a more modern and localised impressionistic began to take hold.  The stories all take place within a shared and disturbingly familiar old garrison town and with the greatest respect to that greatest of writers Ray Bradbury never took us down so dark a road as the one to Halloween Town. The October Country of yesteryear seems quite innocent by comparison. There are indeed horrors aplenty in Jonathan Fisher's imaginary town and like all such places it feels real and not a place the fainthearted may care to venture.
Amongst the eighteen stories between its cover I found a couple of Stand outs . Being drawn naturally to the outre and the Pythonesque I thought I would enjoy the small town horror aspects of the collection mostly but was surprised to find them gravitate towards the Science fiction/fantasy elements. For instance I very much enjoyed the high adventure space opera that is the story Jason Zephyr And The Ascensionauts. Its told in a grand way on a grand scale  and is full of razors edge tension and a universe of hostile aliens harbouring dangerous intents. The Long Day And Night Of John Calisto is a remarkable story that lays bare the complex internal life and external difficulties experienced on a daily basis by a young man with a crippling disease. The details of which are within the story and waiting for you. This story continues an honourable tradition within science fantasy of brutally honest memoir cloaked in fiction. I believe the details of this story will stay with you long after one has read it and could easily sit comfortably with the best of Assimov, Aldiss or Moorcock.
Jonathan Fisher has a condition called Addison's Disease, a rare enough condition which at its worst left him in a coma and fighting for his life at the age of twenty two. During this time Jonathan suffered brain damage and has been left wheel chair bound. Despite  the brain damage and the related damage done to his body he as soon as he was able embarked on a long hard road to rebuild himself to good health. It was a mammoth task but he has managed, against the odds, to regain as many of the skills he lost as a result of the Addison incident .Jonathan's medical condition will require long term support with many of his physical needs assisted by nurses and care workers he speaks about in glowing terms, if we are to assume the details of this story are indeed autobiographical.One should not always assume such as we are in the hands of a writer of fiction who can quite convincingly project us in any direction he wishes us to go.
Jonathan's writing suggests a mind hungry for exploration and input who has determined that if Jonathan cannot go to the mountain then Jonathan will bring the mountain to him. The book is full of comic book, filmic and pop cultural references all told with a peculiarly Norther Irish accent. Well, it is peculiar in the sense that all Northern Irish accents are endearingly peculiar. It seems that he strives on a daily basis to resist the implications of the limitations imposed upon him by the impact of Addisons on his life.
I suppose to a large degree every human being must come to terms with the limitations of the bodies we pass through life in. Few of us are as strong or as fast or as healthy and energy imbued as we would like to be and it is our struggles to overcome those limitations which can come to define us. His work is by turns funny and scary and made up of all the things that go into creating something that feels real from a something which is not.
In that sense alone Jonathan is faster and stronger than most of us. 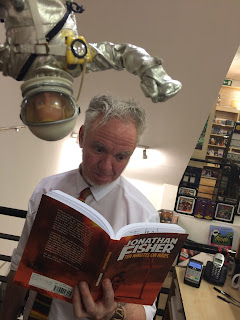 Cultavating A Sense Of Urgency. 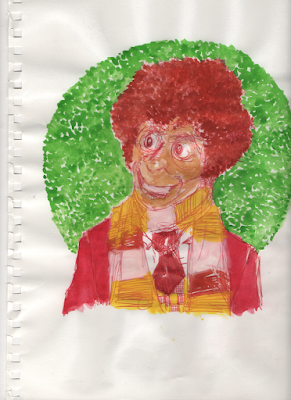 (From My Sketchbook.)
"Come along,Brigadier, You must cultivate a sense of urgency."
Fourth Doctor.Robot.
Posted by Malachy Coney Curiouser and Curiouser at 07:23

The Big Red White And Blue One. 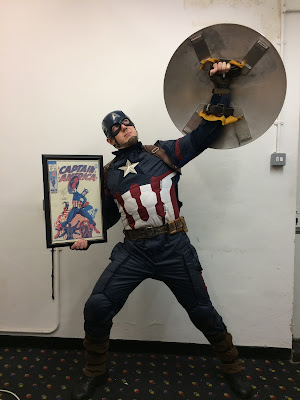 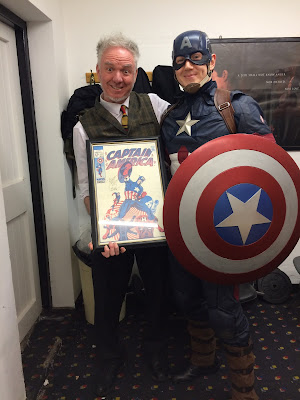 Years ago at a San Diego Comic convention I nervously approached the artist Jim Steranko and asked him to sigh a print for me celebrating his amazing time on Capatain America. He did and I still have it hanging on a wall in the Steptoe And Son shambles I call a home. Thought the oppurtunity to get a shot with Belfast Cap was too good to pass up. Hence my goofy fan boy face. Cap even struck a pose in the Steranko Stylee. He looks cool. I look my usual barnacle self.
He was raising money for a charity combating a terrible condition called Vanishing White Matter. It is a quite rare condition but two kids from the same family here in northern Ireland have been struck by it. Their family do the best the can but it is a tough fight against a merciless unforgiving opponent. The Good Captain and his ever reliable (honest, he is.) chum Deadpool hit the Belfast streets yesterday selling raffle tickets in an attempt to raise money on behalf of this good cause, raising money to help the family through this tough time.Check it out on Caps Facebook page.
Sometimes the good fight is not always a clear cut one but this one is. A terrible bully is threatening a good family and the good guys are doing all they can to help them.
If you can do anything to support them please do.
Posted by Malachy Coney Curiouser and Curiouser at 02:08 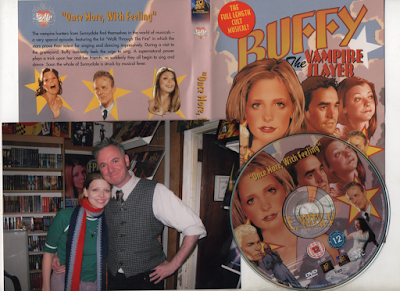 Has it really been that long. Were we all ever so young? Not me, I remember at the time of transmission someone asking me if I got any royalties from the Giles The Librarian figure. Bloody cheek. Literally. I met a few cast members from the show over the years and have particularly fond memories of the Magnificent Amber (That is a knowing Orson Welles reference, boom,boom!) Benson. She was so bohemian and her dear old ma was a real hoot too. For a time we traveled through space and time together and had many adventures(mostly during tea breaks and entirely in my head.).
The trouble with having a time and space traveling companion who is an actress is that all adventures are subject to unexpected filming commitments.
Whatever your feelings are about this very enjoyable television series then and now you cannot take away the fact it helped reinvigorate genre television for a generation or two. Showing that well written and performed stories told in an engaging and optimistic fashion will have legs and travel.
Happy Birthday to a much loved slice of genre telly. Though the cast and creative team are scattered to the four winds there are still nights when they all come together after the opening chords..
Posted by Malachy Coney Curiouser and Curiouser at 03:52 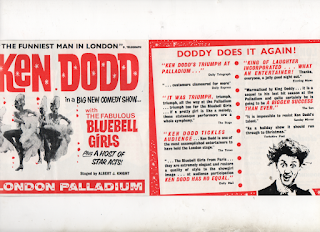 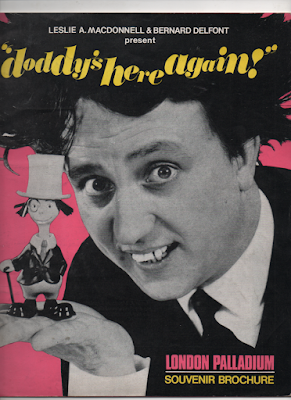 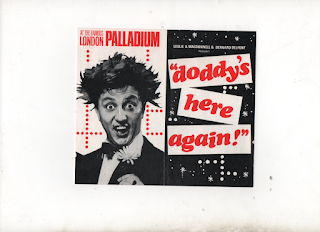 Look what my chums Frank and Steph found at a car boot sale on the Crumlin Rd. A London Palladium programme from those long ago days . How glam it all looks. The photographs inside are amazing. Lines of entertainers waiting in rows in their Sunday best to meet and greet some royal personage as they drift by dishing out approval. It looks so terribly respectful. One cannot help feeling wistfully nostalgic for a time when a Sunday night at the Palladium was an innocent and shared pastime. There is a charming run down end of the pier acts quality to it all. That is no bad thing. There was a lot of love and talent to be found at the end of the pier.
Posted by Malachy Coney Curiouser and Curiouser at 04:43

Lost On A Dark Sea. 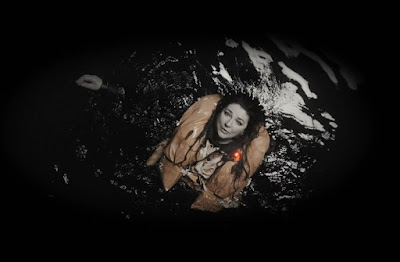 Such a beautiful piece this. Sorry, went all Yoda speak there. I meant to say what a curious and beautiful thing this performance by Kate Bush this is;And Dream Of Sheep. A woman is lost and alone on a cold dark sea at night. The little light shining on her life jacket just a twinkle on a ceaseless and merciless stretch of dark water. The surprising frailty of the performance caught me. There are soft moments between her sung lines when her breath catches as she draws the words forth. It quite crippled me for moments as my own breath mirrored the emotions she gasped out.
I have not to the best of my knowledge ever suffered recurring bad dreams or nightmares but I did have a dream more than once when I was growing where I was floating on dark water while some unseen but threatening shape glided through the water beneath my feet. I would feel myself rise up as it moved beneath me displaced in the water by its passing. I always woke up as it broke surface so I never knew what it was.
Check this video out for yourself. Get lost at sea for a few moments. Try not to get mistaken for a buoy. Think of warm breath and poppies. Heavy with seed. Let them take you home. 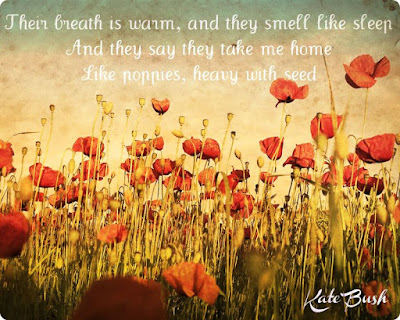 Remember You Are Not a Womble But He Is. 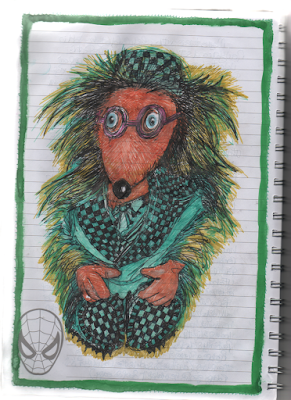 (Sketch from one of my notebooks.) Uncle Bulgaria is a rum old cove. He might be considered old school these days by those with a more incendiary and mercurial frame of mind but it was the school of hard knocks. This is a womble who can tell a goose berry from a pomegranate.
The Wombles would probably find Wimbledon a different place these days.
Sorting human beings discarded garbage would be a bit of a horror show these daysI suspect.
Posted by Malachy Coney Curiouser and Curiouser at 04:38 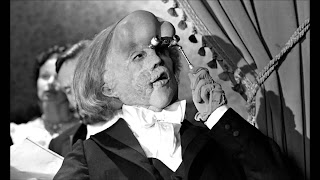 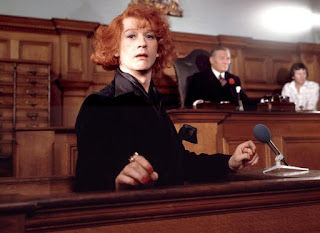 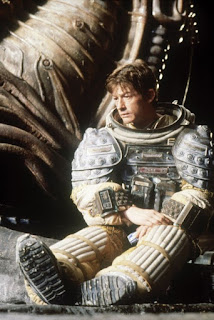 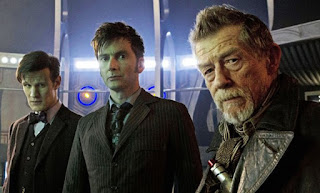 Was saddened to hear of the passing of John Hurt. An amazing actor who over the meandering course of a long and sustained career played so many different roles and who never lost the ability to entertain, illuminate and surprise. Hard to believe that other actors warned him "You'll never work again, " after taking the round breaking and arguably society changing role of Quentin Crisp in The Naked Civil Servant. His Caligula in the magnificent BBC adaption of Robert Graves I, Claudius is an equally unforgettable turn.Beyond his obvious highs there were many lesser known roles but none where he did not give his all. I always had a soft spot for his turn in Mister Forbush And The Penguins.Think I first saw it at just the right age on just the right Monday night.
His War Doctor will always have a special resonance for me. I had been listening to the third volume of stories the night before the news broke of his death. I had been lost in the performances of all involved. Taken out of myself for a couple of hours in a sound stream of storytelling.
That is when the real magic occurs , I suppose.