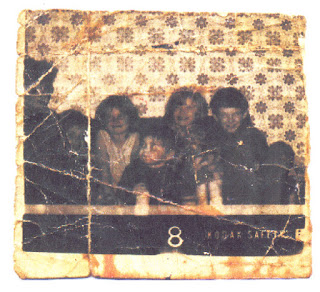 I was recently asked by a lady named Triona to contribute a piece to this exhibition which has been travelling around Northern Ireland. Its a really engaging and fascinating exhibition, which like the organising principle behind the project, has a very accepting and broad mandate. "WHATEVER YOU SAY, SAY SOMETHING." is the bridgehead on their flyers. Everyone has a voice. Everyone has a story to tell is what it seemed to say to me.
The theme of the exhibition is as it says above. take an everyday object, drop it into a period of conflict and its adaptive purpose transformed it into something else. The alchemy of violence. Simple objects become loaded with newly aquirred significance and meaning with such stories to tell.
My contribution was a black and white photograph of my brother and sisters and me taken by an english soldier during an army raid on our home. You would not think to look at this photograph that it was taken in the early hours of the morning , that our home was being torn apart by an armed raiding party and that the kids on that sofa smiling for the camera are actually huddled together because they are terrified.
The soldier who took the photograph winked at us. I think he believed he was being kind. Normalising a bit of a shocker. As far as I know this is the only group photograph of us as kids. We did not own a camera so our childhoods mostly only exist in memory. But then who's does'nt. This unknown soldier sent us the photograph weeks later in a plain brown envelops marked THE CONEY KIDS.
It was taken at a time of one of the Northern Irish Troubles many peaks. in the heart of Ardoyne in Etna drive. In the black and white memory play of the past it was  the street where everything seemed to happen. Etna Drive, Jamica street, Kingston street, the streets where I ran as a boy were all named after places with active and shifting tectonic  plates of their own.
I still remember the raised and frightening voices thundering with familiar threats countered by my ma's pleading but defiant voice. It might have sounded like a chicken clucking to the well armed invaders of our home but she was saying. "DO'NT YOU HURT MY CHICKS!"
I have always believed my ma to be the bravest most decent person I have ever known. So in that sense they were out-armed.
Nothing was ever found during those late night raids on our home. There was never anything to find.We may have been the poorest family on one of Belfast's poorest streets but we were rich in another sense. My ma and da would never have harmed another human being. It would never have occurred to them.
I think the soldier who took the photograph knew this.
Each object in the exhibition came with a brief explanation of its history. Mine came in the form of a short comic strip because that is how I communicate with the world. It was a one page strip which originally appeared in an issue of the politics,art and culture monthly Fortnight. A magazine whose editor Malachi O' Doherty welcomed my contributions. He was a very forward thinking man who who saw the artform of comics deserved a life beyond the publishing ghetto it seemed relegated to in Northern Ireland.
The organisation behind the exhibition are a group called Healing Through Remembering whose members come from a wide range of political, social and religious backgrounds. You can find out more about them at their website www,healingthroughremembering.org.
The clarity of so many important and precious moments lose their focus with the passage of time and become misted.  The past cannot become a country we have lost the maps to. How else can we learn to navigate the complex and unknown paths of our shared futures.
How we get there may well determine what we find there when we arrive. 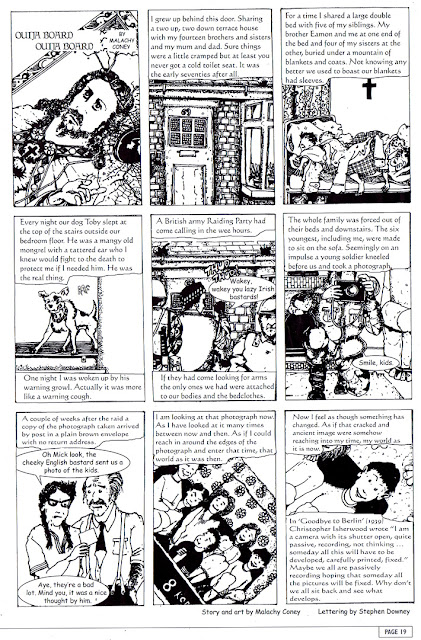 
When he was alive my da once said to me that one of the things he had always wanted in life was a small piece of land of his own.Just a wee strip of soil that he could tend to in his own way and on which he could grow whatever he wanted to grow. He never did get it.Men who support their families by digging graves cannot afford to buy land.In a way that is also something I  have wanted myself.A little space of my own where I can grow whatever I want.That is what this is.My tiny allotment on the internet.Maybe I will tease something to life in its hard unforgiving soil.And you are more than welcome to a taste of it.If you are ever in the neighborhood drop in and see whats growing.
Come and See. 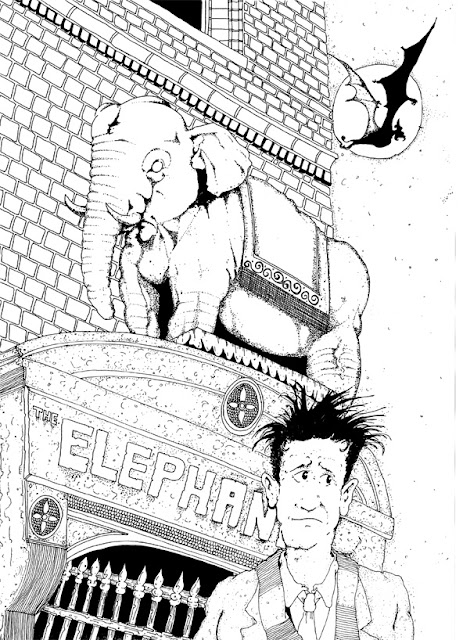