The Past Is Prologue. 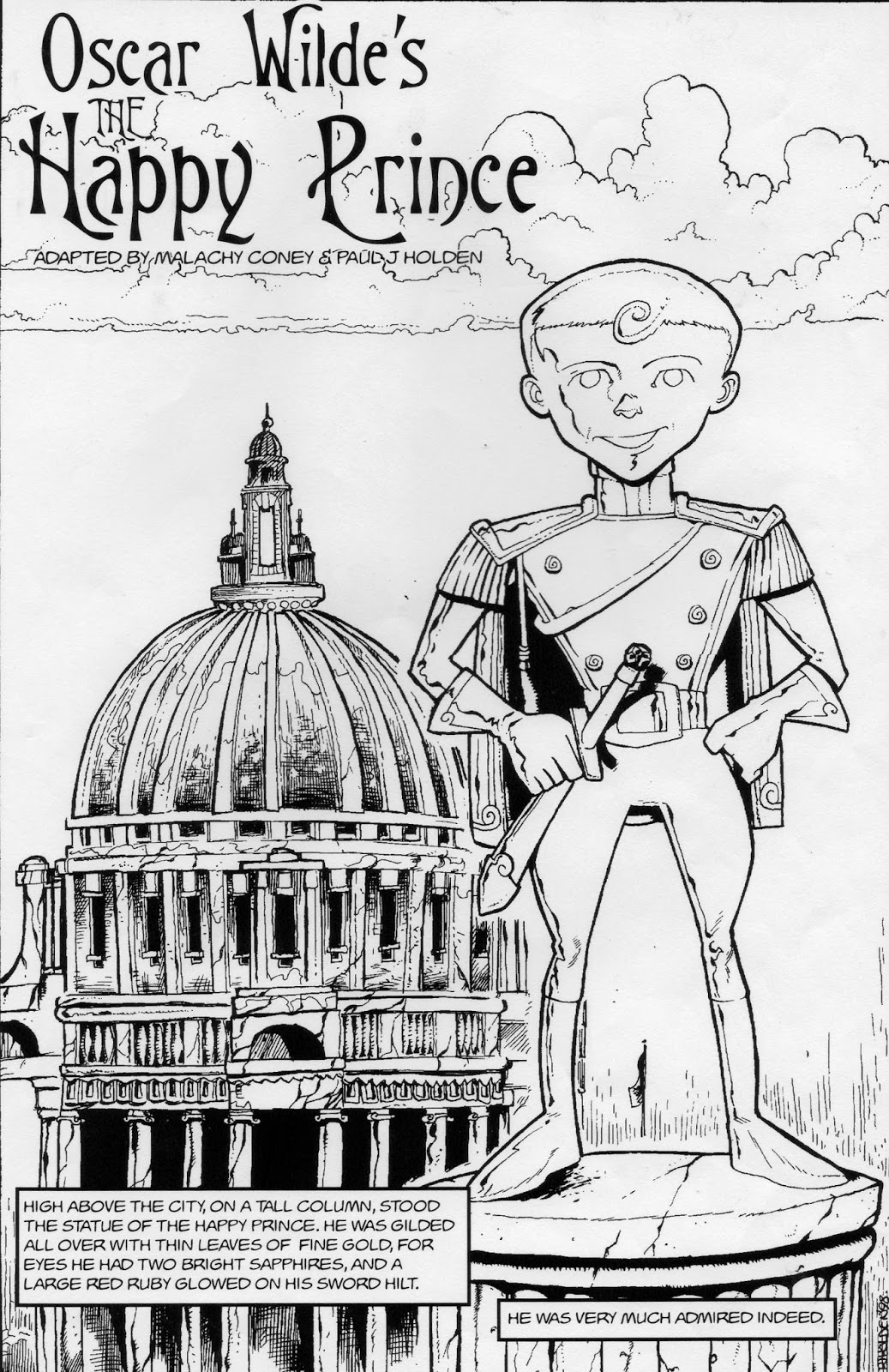 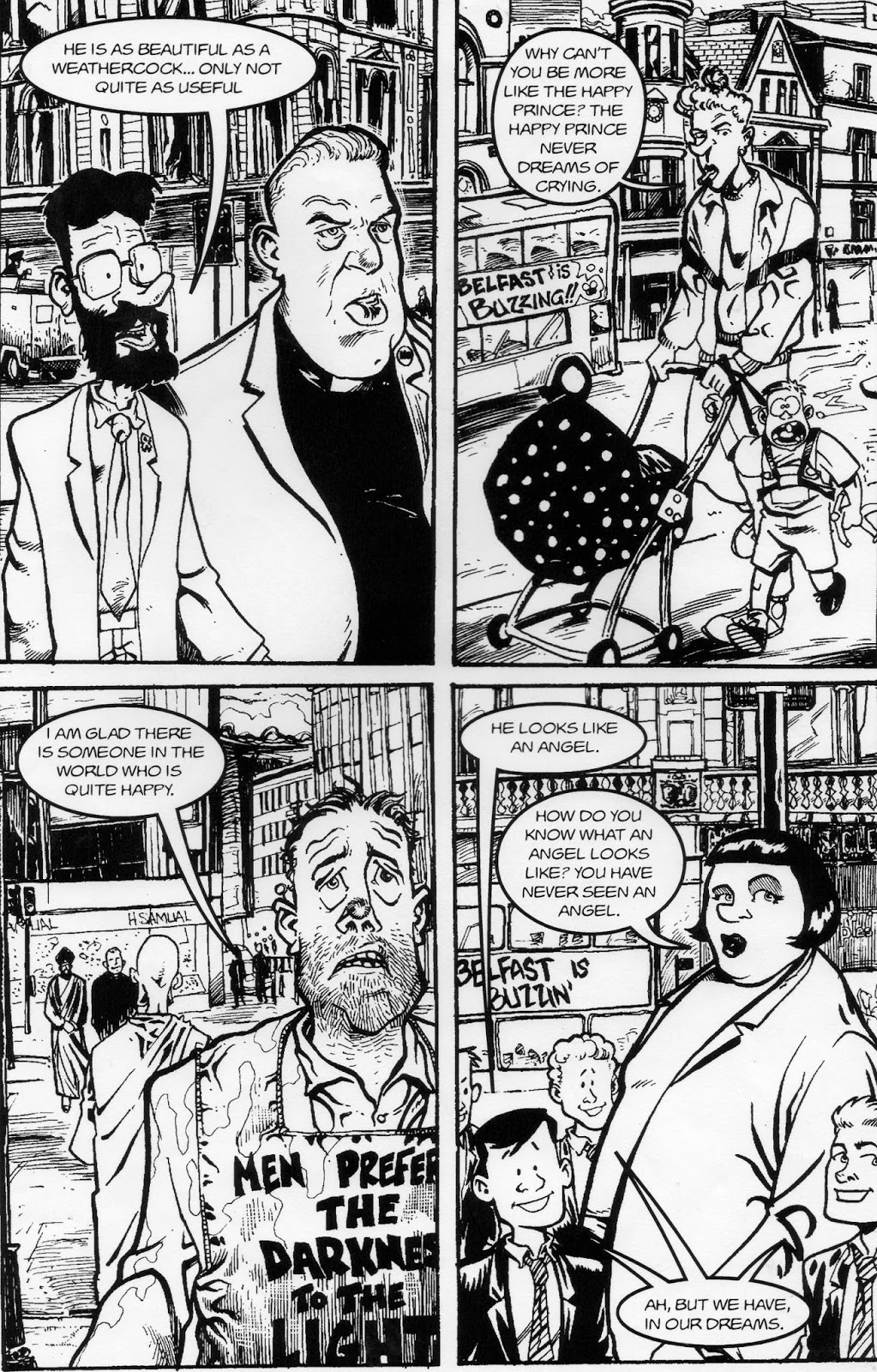 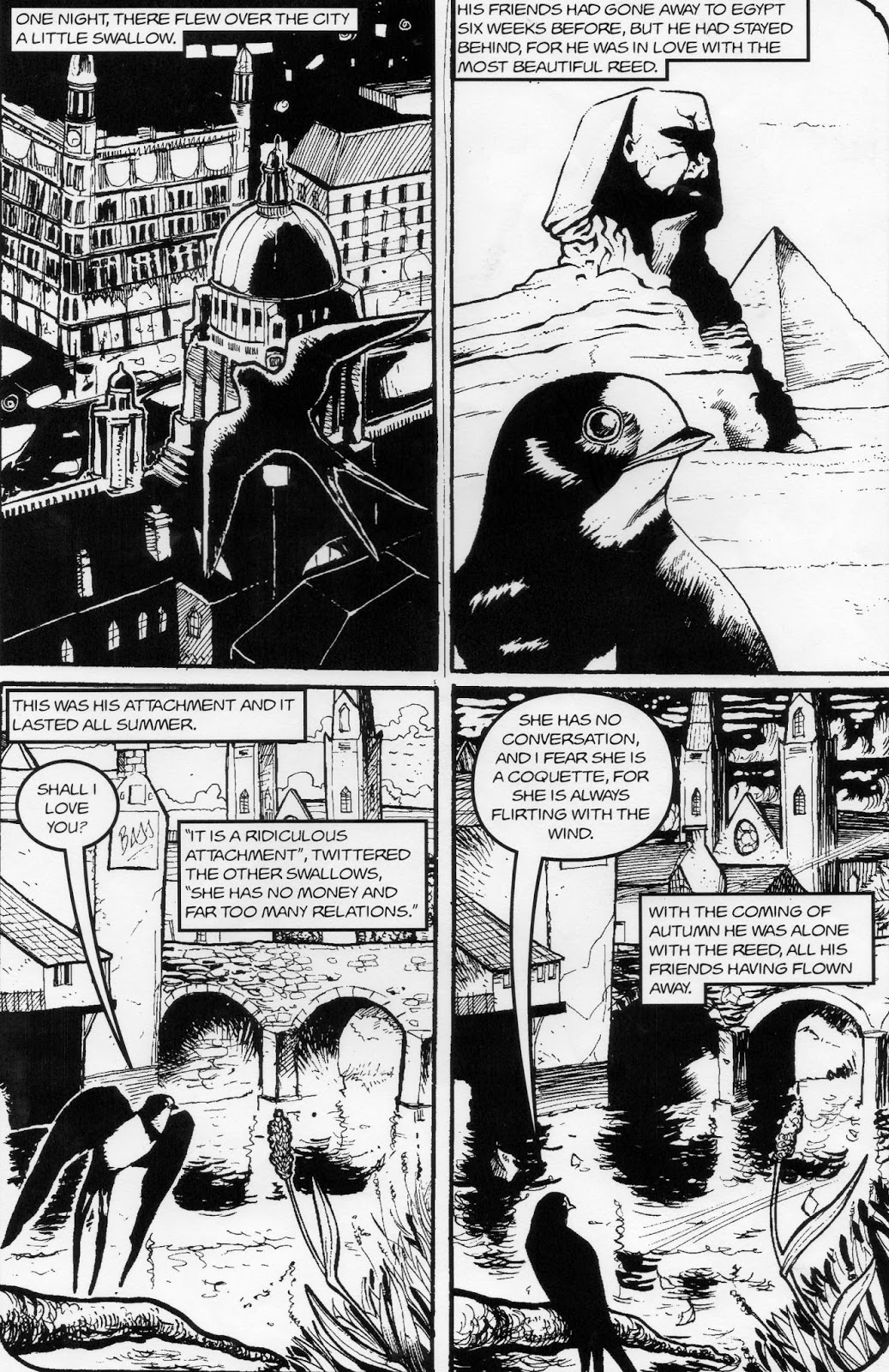 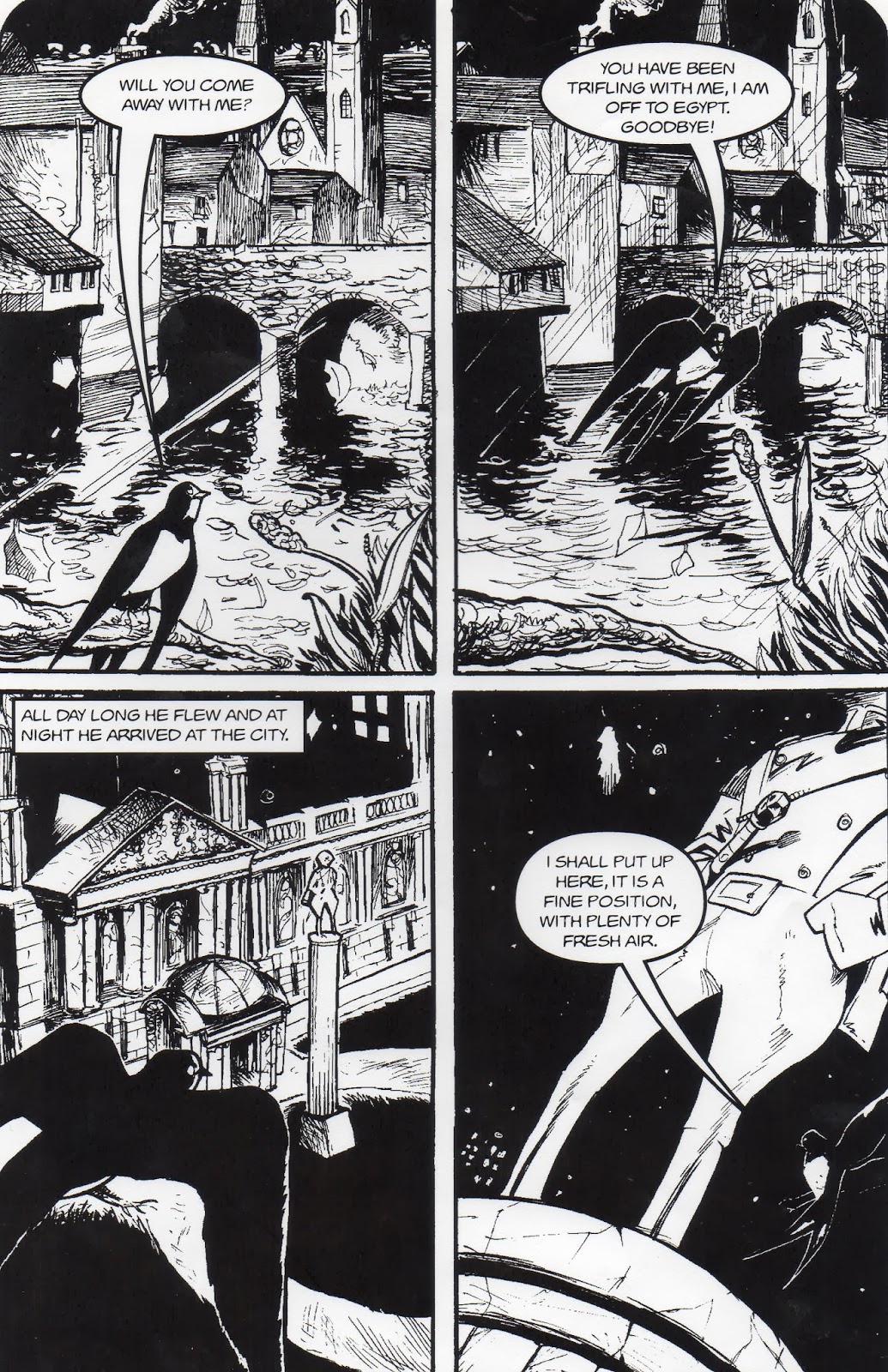 Here are some pages from an abandoned project by PJ Holden and myself. An adaption of The Oscar Wilde story The happy Prince into a comic strip we attempted back in the day. We transported the location of the tale from the London of Queen Victoria to modern day Belfast. Well, the Belfast of the early nineties which was a very different city from the one it fancies itself to be these days. The troubles were still raging with no end in sight and no possible resolution to the conflicts seemed likely. Murder and atrocity were still going on and everyday seemed to herald some new affront. New cruelties perpetrated in the name of Gods and flags. Being a frightful fop, even in those days, the works of Oscar Wilde were a great source of comfort and joy to me and I so wanted to translate a little of their magic into the everyday. I never wanted to stand in the gutter staring at the stars I wanted to drag them down to my level.
The comic was to be in black and white right up to the end when the angels would bear the precious swallow and heart of the prince into Heaven when the comic would explode into color.
Ah the ambitions of young men.
Anyway we never did finish it. Cannot think why, it was such a joy to see what PJ was doing with my attempt to adapt Oscar's magic words. Please pay particular attention, if you are so inclined, to the two characters on page two frame one. Not named but surely familiar to any who survived those days. we were trying to present the notion of two enemies reconciled in a shared opinion. After all you do not make friends with your friends you make friends with your enemies. It was unthinkable that these two men would ever stand together and in truth it never happened, never came true. Mind you it was not a kick in the arse off...
Is'nt PJ's artwork just lovely.
Like the wee man himself.
Posted by Malachy Coney Curiouser and Curiouser at 09:49

Adventures In Space and Time. 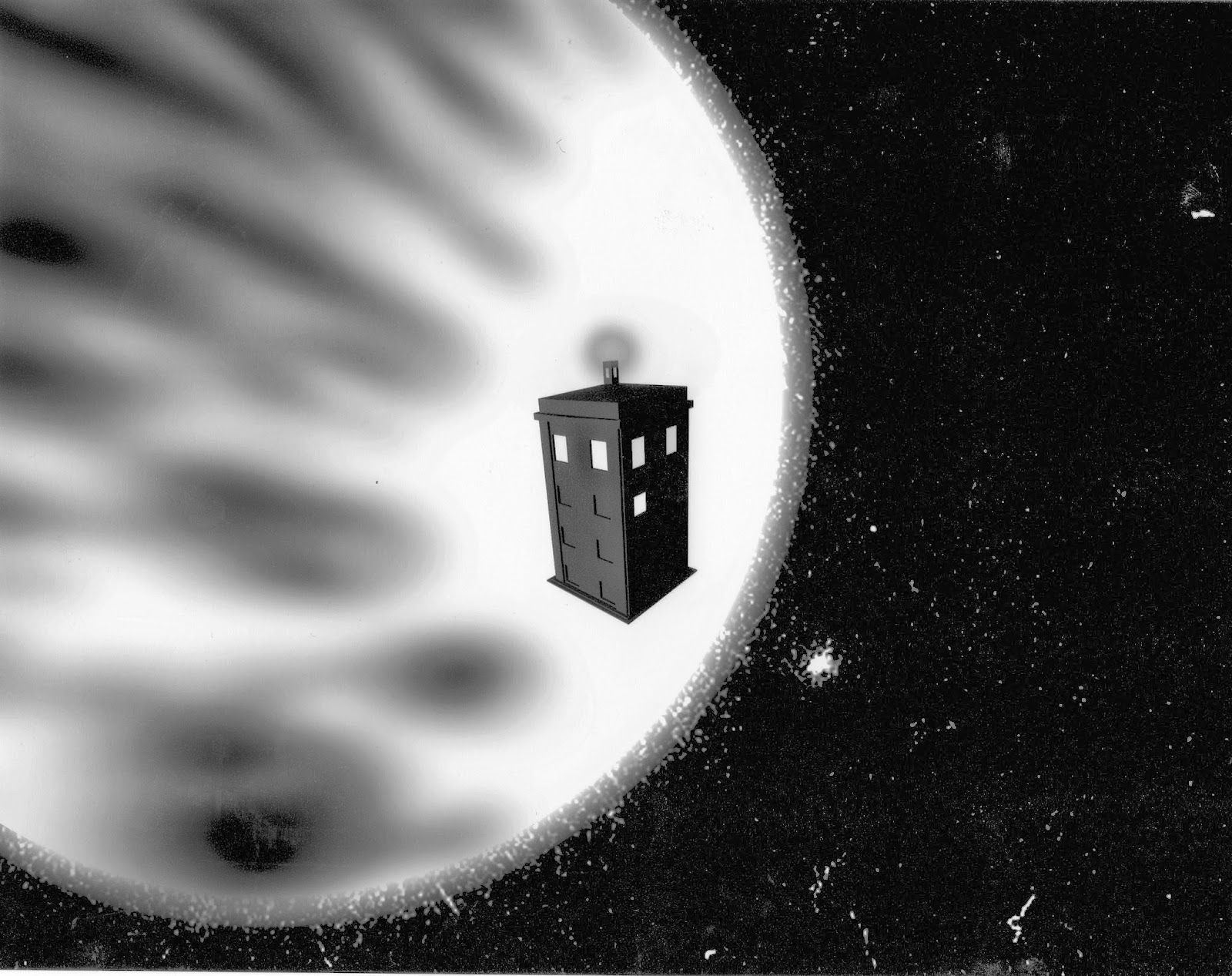 Thank you for this Mark Mc Keown. It is beautiful. Just beautiful. In Space no one can hear you smile.

Potassium And All That Jazz. 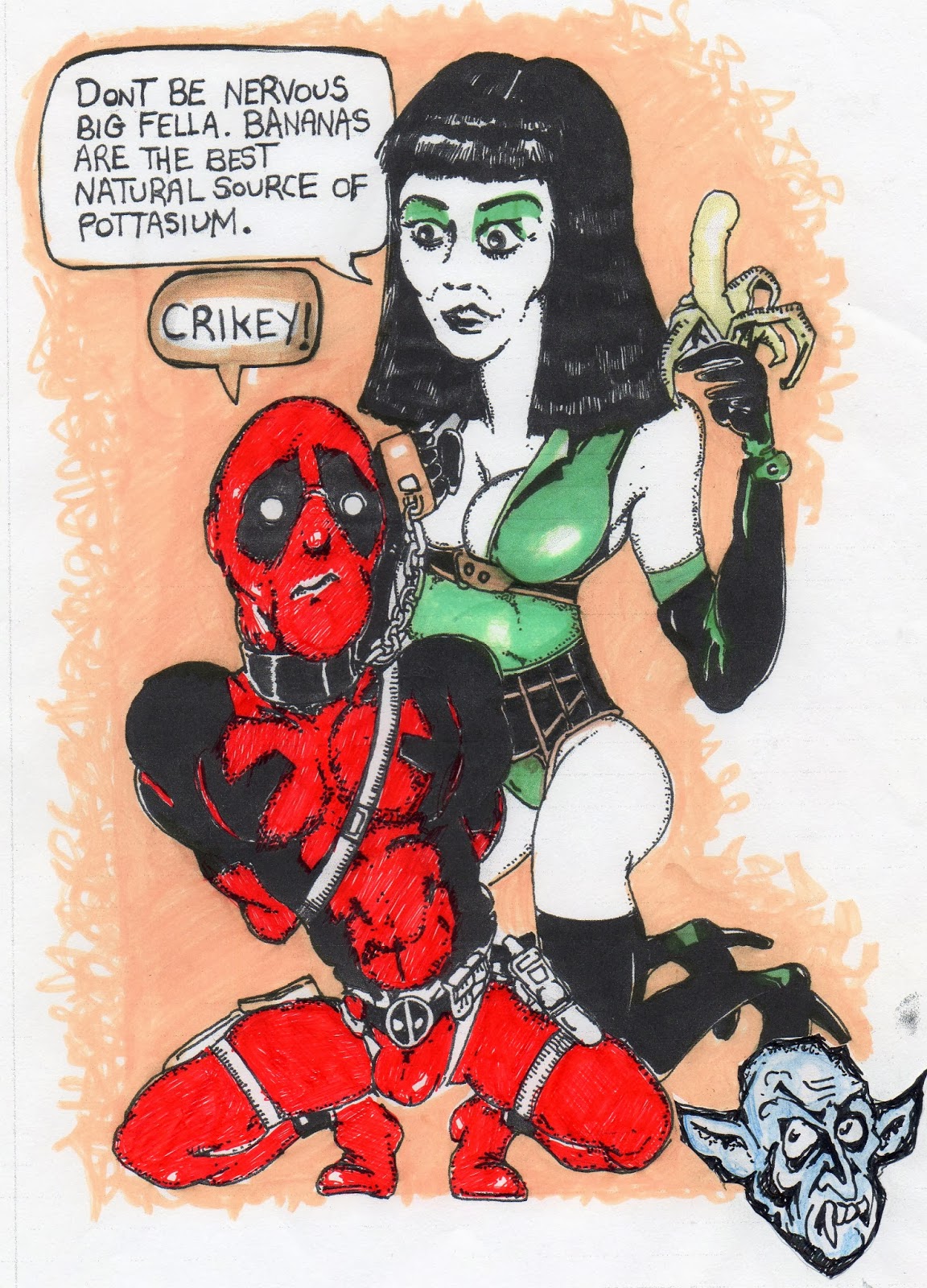 (From my sketchbook.)Hypertension, high blood pressure, acne, fatigue, kidney stones, temporary memory loss, heart deterioration and muscle pain, just some of the conditions caused by low levels of potassium with the human body (i.e. yours). Potassium is required by our bodies for smooth muscular and cellular functions.
So do your body a favor and 'ave a banana.
Posted by Malachy Coney Curiouser and Curiouser at 01:36 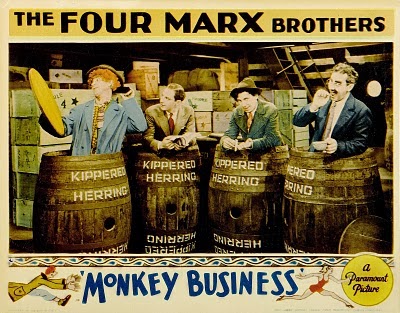 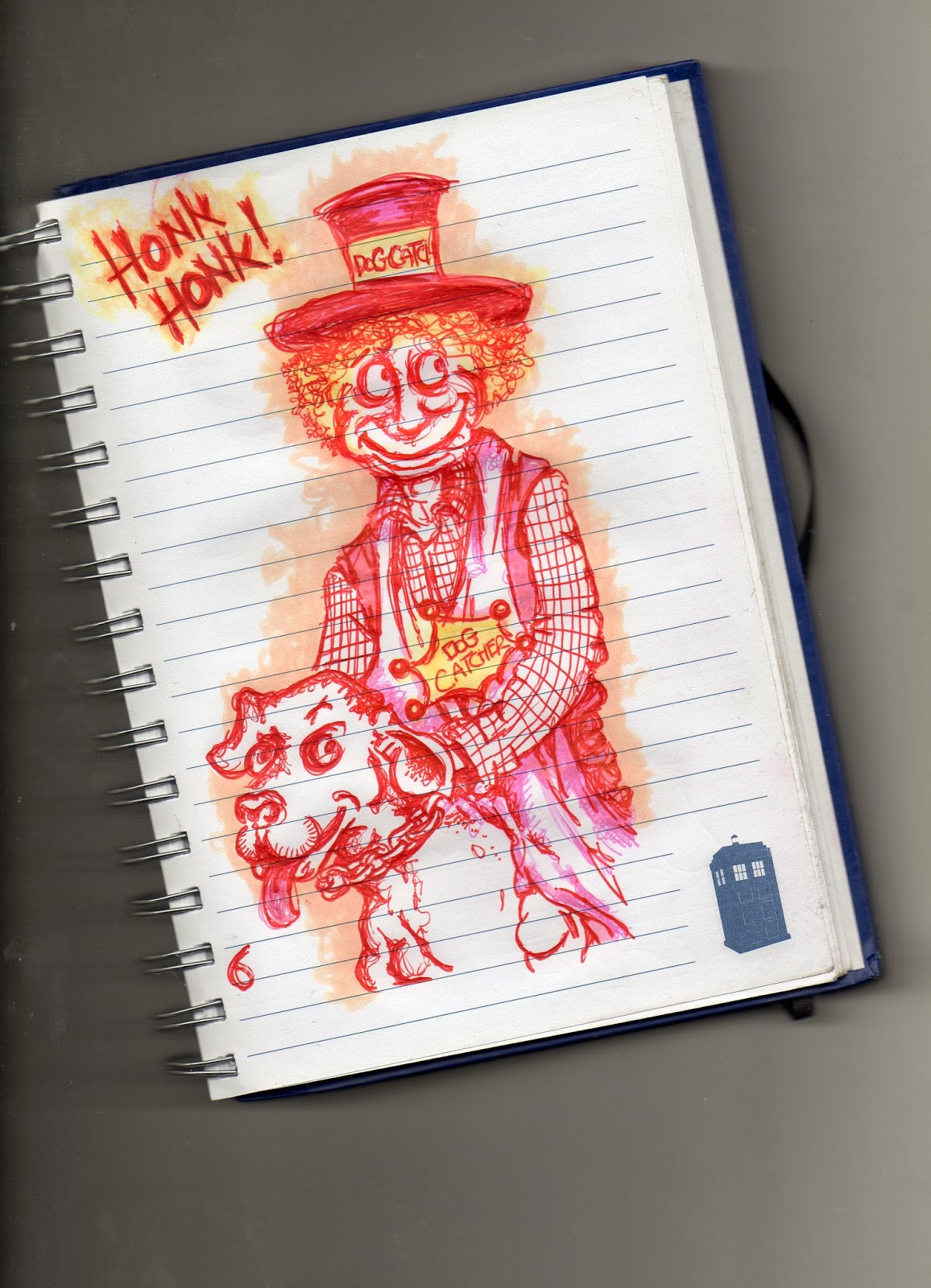 Oh boy I love me a monkey how could I not love me a movie called Monkey Business. It is the second movie on the Marx brothers DVD Boxed Set I was gifted by a dear pal and it is the gift that just keeps on giving. I almost cheered as the opening credits revealed a series of barrels rolling down a gang plank each one displaying a charming caricature of one of the brothers. Imagine having these barrels standing in the corner of a garden, a Marx Brothers corner where you were never quite sure what was going to happen. The movie begins all at sea on an ocean liner about to dock in America with the four brothers stowaways hiding out in pickled herring barrels. There are also two rival gangsters aboard ship and both pairs of brothers find themselves in uneasy and completely bonkers alliance with them whilst also avoiding the enraged liner crew who chase them around the ship. There is a fantastic scene involving a saucy mobster moll and Groucho who is hiding out in her closet. There is great chemistry between the pair and I have since found out the actress playing her Thelma Todd was found dead in most suspicious circumstances. A smoke filled garage and it has been suggested that this was a murder dressed up to look like a suicide. A stark reminder of the cruel and capricious nature of The Hollywood Babylon a lot of these entertainers from that era found themselves swathing through. It is a tragic end for a very talented young woman who holds her own with one of the sharpest talents of her age. The Punch and Judy scene with Harpo is probably my favorite moment in the movie. Harpo ducks into a cabin where a crowd of howling children are being entertained by a Punch and Judy show in a tent that appears to have no operator and is possibly transcendental. Harpo climbs into the tent and dangles a tiny puppet body under his chin and using mostly his rubber face to throw shapes he convinces the ships captain he is only a puppet. The ships first mate thinks otherwise and chaos ensues.The increasingly frustrated first mate and Harpo enjoy a ballet of cartoon like proportions before Harpo exits the scene in a wee car with a face mask on the back of his head. Harpo also manages to get himself a pet frog which he discovered living on board the liner which he moves in under his top hat. I know this stretches credulity somewhat but I know from experience frogs can turn up in the most unlikely of places. At one point he attempts to retrieve the frog from a passengers mouth when he overhears him hoarsely complaing of a frog in his throat. Ribit, ribit.
The jokes and verbal wordplay come so fast and so furiously that it would be more than possible to miss a line of dialogue whilst still laughing at a proceeding line. The script is delivered with such skill and joyful aplomb that it feels almost as if they are making it up as they go along and I mean that in a great way. Even though this movie was released way back in 1931 Groucho is cracking knowingly ironic jokes about restricting immigration in order to prevent cultural and social disintegration, the same bogeyman, all these years later, which haunts the pages of almost every newspaper sold throughout the length and breadth of the United Kingdom. It would seem the cultural zeitgeist is older but no wiser.
To think the brothers performed these scenes live as part of their vaudeville act is just astonishing. The different energies generated by each of the brothers leap like sparks from scene to scene. It is a remarkable chemistry shared by these men, all four of them. What amazing and complex set of variables combined to produce these remarkable men, some unique set of circumstances which to my knowledge has never been repeated.
There has only ever been one set of Marx brothers.
I wonder if The Doctor ever met them. 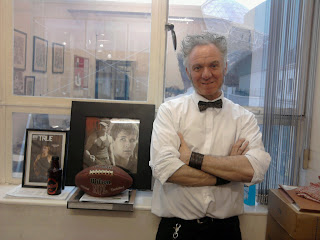 A thing of beauty and a joy forever, or Ryan Kwanten as he is known to the rest of the world. It is my birthday today and I had indulged in one secret big five-oh birthday wish that just never came true, and yes it broke the bounds of all known decency but the bounds of decency are such subjective view points. He never showed up anyway so there is a good chance I will see all my loved ones in the next life instead of my predicted fate of an eternity in some sulpherus pit chained to a rock being devoured by a fiery wyrm.That is not a Ryan Kwanten shrine on the window sill next to me by the way.It is a loose ensemble of Ryan Kwanten related memorabillia. Big difference okay, one is looney and the other is an adult appreciation of an artiste at the height of his artistic powers.And boy does he have some adult artistic powers.Ah well, I will not dwell on it. Disapointment dogs my steps like a leprous step dogger. It is Kharma I suppose. I have done nothing to warrant such a feast of pleasures in such a random fashion from whatever forces govern our existence in this world. I shall dedicate the next fifty to making it happen. I will off course look even more like an albino yoda than I already do and he will remain in a state of graceless perfection (much as he does in True Blood Season One or Griff the Invisible or Red Hill or America Brown or Dead Silence or...well, almost everything he has been in.)Going to have to start training today if I hope to make this happen in fifty years.
It is going to take me at least fifty to get in even reasonable shape.
Or I could just regenerate like yer man from Gallifrey.
Only I cannot off course regenerate and every morning I drag my bag of bones from my bed feels like the first time, I fear I must accept my foot is set upon the slow path. Heres to the next fifty....

Everything Old Is New Again. 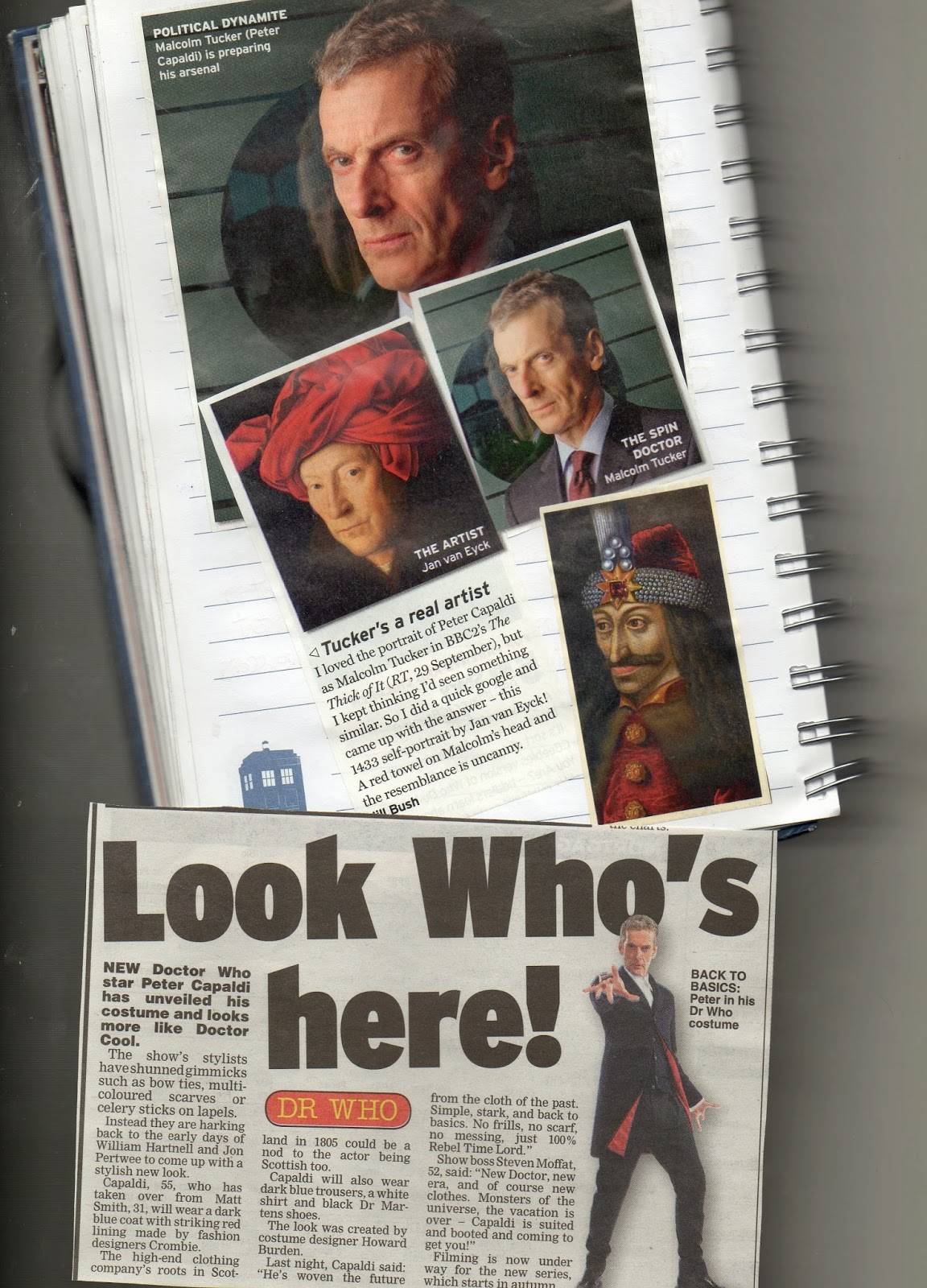 ( extract from a notebook and a recent red top). The old alchemy working new magic. Well hello Doctor.
Posted by Malachy Coney Curiouser and Curiouser at 12:48 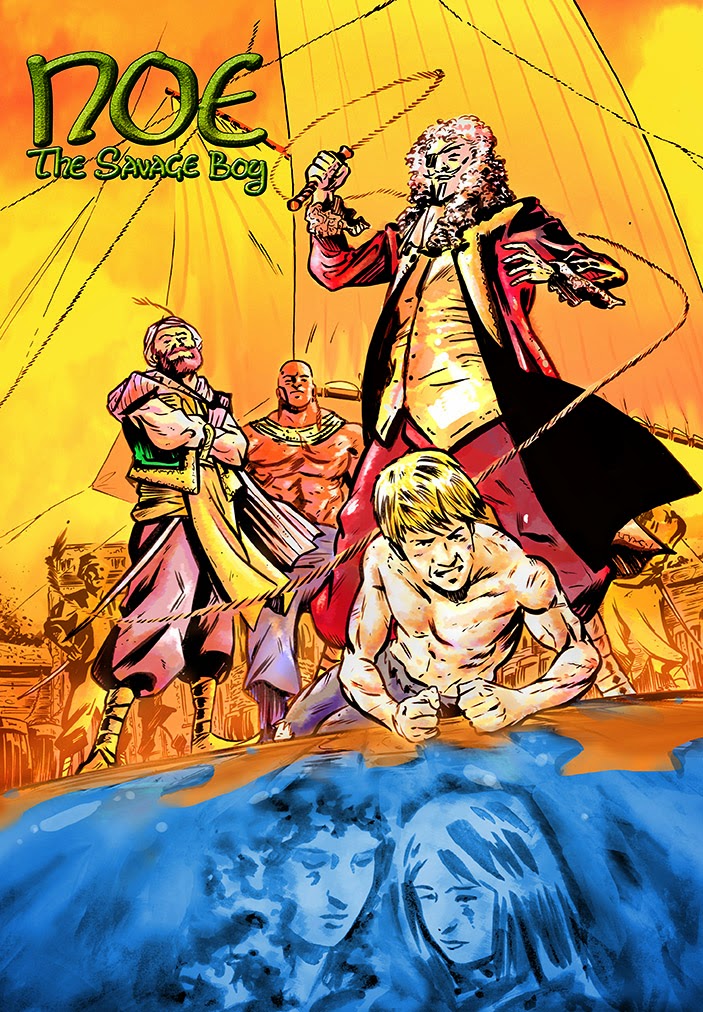 Here is the cover for Noe The Savage Boy issue two as drawn by the immensely talented and perfectly formed Stephen Downey which we hope will be hitting the shelves some time around the end of Febuary/beginning of March. The story picks up after The Sack of Baltimore and the terrible events that follow. Hope you enjoyed the first enough to come back for more.
Posted by Malachy Coney Curiouser and Curiouser at 12:47