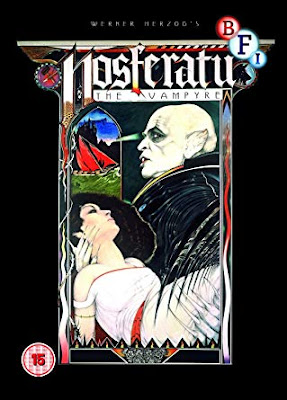 By The Hoary Hosts Of Hoggoth! Werner Herzog is in the new Star wars television series The Mandolorian playing a smooth talking space slime ball. You could have knocked me over with the wonky arm of a gondark. He is such a talented man, a true Renaissance man, you never know where he might pop up or what he may be doing. Anyway, there he was, a voice I had not heard for some time(Since his amazing movie; Cave Of Forgotten Dreams probably, actually no. More recently I saw Grizzly Man, an uncomfortable vision if you know how it ends.) and I went looking for a copy of his version of the film Nosferatu, and found two versions of it.
There is so much to like in this film. Its a nightmare to be sure, a pleasing terror in truth. Like a terrible dream you feel trapped in, awaiting exhausted and sweaty from that dream to fall deeper into another. The opening sequence in the boneyard proves itself a dream sequence and the soaring melancholy of the soundtrack draws you into a world where i was sure Geppetto sat behind a passing gable walk chiseling a son from wood, praying for the touch of the blue Fairy. Some of the haunting qualities of that soundtrack will stay with you long after you have seen the film, possibly even married to the singular vision of its director.
Bram stokers estate would not give permission to film his novel so FW Murnau, a German film maker, not wishing to abandon the project, was forced to adapt the original text as best he could, introducing Max Schrek as the Count , producing a silent expressionist nightmare that has dazzled and inspired generations. This is a vision from an other century that transcends the ages which over the years has risen above the muddled creative beginnings to become something of a defining artistic triumph in its own right. That Werner Herzog wanted to remain faithful to that original vision is not surprising to me, yet he introduces a few tweaks of his own and makes much of his freedom to wrap it in as haunting a sound-scape as the original possessed such visual flair but had to remain silent.
Its sad, haunting and timeless. A testament to all involved, in death as much as in life. 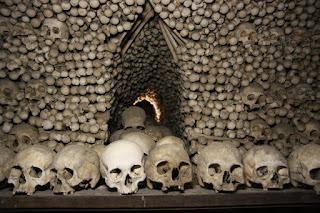