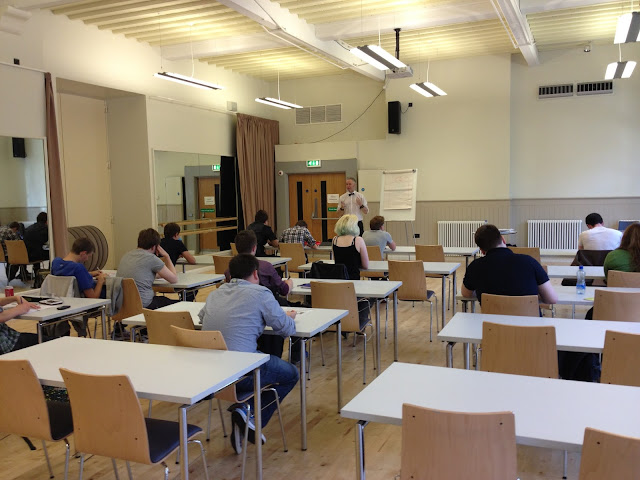 Took a comic book scripting class on Monday night past .Or perhaps I should say I gave a comic scripting class in The Crescent Arts Centre. In a lovely airy classroom with wide french windows along one side and ballerina mirrors along the other. The event was the brain child of Sean from Cinemagic who invited me to take the first night. To get the ball rolling on a month long project with a view to producing an on-line comic which is all the work of a new wave of young writers and artists from the province. The hope is that each participant will contribute a piece of their own work, the theme uniting them being SEE ME, NOW. We are making our own little time-capsule, saving this moment, and we are going to bury that time-capsule on the internet. I have done workshops before and each one is a very different experience. Sean handed the class over to me and I did my best to inspire and inform. To try coaxing the student into breaking the tyranny of the blank page and produce a stand alone piece of work. In the beginnings it is always very basic. Pens, pencils, erazers and sharpeners all rallying to combat the glaring emptiness of a page resisting being filled. Hopefully we have made a good start. Everyone in the class rose to the occasion and after a short break to draw breath and collate our thinking we got down to the nuts and bolts of telling stories. The breadth of their stories was impressive. Everything from the very personal,to the political,to the fantastical. I was most pleased with their efforts and do hope each one completes the projects they have begun. It will be an interesting compilation come the upload.
You know I remember back in the day when I used to go to the Crescent Arts Centre when it was a nightclub. An old run down church venue where I used to dance til the early hour. Swinging a sweaty head full of dreads. Busting my scarecrow moves. I got jumped and beat up one night by some blokes who thought I was a complete freak. The person I was with ran away in fear and left me to get a punching and a kicking. Later that same night I challenged him about this and he started crying and said IT IS NO GOOD DEPENDING ON ME.I AM SORRY. I HAVE NO COURAGE. He was so pathetically honest I remember bursting out laughing. Such was the generosity of our young spirits we both laughed long and stupidly. Despite my bruises and tattered nerves. Or maybe because of them, who knows.
Who would have believed that many years later I would be taking a class in a refurbished version of that sticky floored venue. On a subject that has brought me so much joy..
Certainly not me in my Haysi Fantasyzee Days.
JOHN WAYNE IS INDEED BIG LEGGY.

The Time Lady,The Tramp And The Robot Dog. 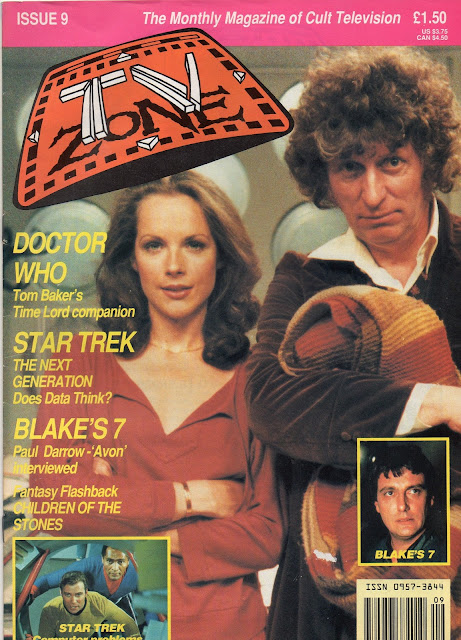 Oh dear, Leela has left, but the moment has been prepared for. Enter Romanadvoratrelundar..or Romana(although the Doctor was all for christening her Fred). Her first appearance on screen was jaw-dropping. Long,tall,beautiful and majestically Gallifreyan, she walked around The Tardis like she owned it. Not that she would want it. A wonky type-40 would have been beneath her. This incarnation of Romana first appeared in The Ribos Operation, the first part of The Key To Time sequence. Check out the expression the Doctor shares with K9 the first time he lays eyes on her in the Tardis console room. For a brief moment the ghost of Harpo Marx plays across his features. It is a lovely moment and shows the intimate regard he has for his second best friend. It is great that K9 is still traveling with his master at this point, still doggishly loyal and dead-pan as ever. They are a funny dysfunctional pretend family are this Tardis crew. Grown up but utterly child like. The perfectly pitched performance by Mary Tamm as the aristocratic time-lady allows for a very special dynamic between the pair. She is so patient and grown up while he is allowed to play the gifted lost boy. The Key To Time was an epic quest with a different episode every Saturday tea-time at the tail end of the decade now remembered as...the Seventies. Long thought passed we have ended up there again thanks to the good people at Big Finish. Seven new episodes detailing what came next after their escape from the Black Guardian. After he almost tricked them into doing his dirty work for him. The retrieval of an all powerful artifact to be put to some nasty business by an all powerful evil entity. An epic quest with a twist in its tail and a truly startling glimpse of a demented Tom Baker on top form. Oh how I love Old Who! Yet here are seven more wonderful stories in a season gifted to us by people who are producing some of the best Who ever.
Here are seven new stories which possess cross-over elements rather than a linking story arch. The first is a wonderful PGWoodhouse inspired comedy of terrors that just lends itself so perfectly to this particular Tardis crew. Its a great start and hits the ground moving in the most charming fashion. The wordplay and the comedic timing dazzle under confidant and joyful direction. Just listen to the extras following for greater insight and appreciation. Next we meet The Lann and the barmy but brilliant Cuthbert who is more than a worthy rival for the doctor(played by David Warner..yes,I know only bloody David Warner!). after that the Tardis crew face the Justice Of Jalxar and we see the sublime return of Jago and Litefoot(Hurrah!For me thet represent Doctor Who's finest spin-off. Yes I said spin-off. Go and investigate. Treasure awaits!). It is just Who at its finest. You can practically smell the pong of Olde London Towne. From there the Tardis takes us to a watery Abyss where Alice Krige(yes, only bloody Alice Krige!) leads  a scientific expedition into very dangerous waters indeed. And just as you are coming up for air who should reappear but Cuthbert and his private security guards The Daleks(Yes!Only the bloody..well,you get the picture.). It is an epic conclusion to a season that was surely televised in some other dimension. Actually that is not fair to the incredible things Big Finish achieve on their own terms. They are just the best at what they do.SNKT! Two special mentions for the wonderful John Leeson as K9 and the equally wonderful Toby Hadoke  as Mister Dorrick. I do hope we meet them again in other stories. Not jus for what they bring to the stories they are in but for the fun they bring to the extra material.
There is an added poignancy to the proceedings with the sad passing of Mary Tamm. Another victim of that terrible disease cancer. He performance is so informed with a lightness of touch and a gentle joy that is hard to imagine how ill she was to become. Her time as Romana in these stories is just as lovely as her onscreen time all those years ago. Better written in some ways. She seems to draw an impish quality from Tom Baker who obviously found Mary to be utterly charming. The last line of the series belongs to her and will bring a tear to the eye of the listener.
There has been much talk of late about the possibility of a female incarnation of the Doctor. We now know that at least for one more incarnation this is not to be. however way back in 1990 that very notion was put to Mary Tamm in an interview. Would she consider becoming the Doctor and her reply was a resounding yes. It was even suggested that it would perhaps turn out that Romana was The Doctor all along. I do not know about that but I cannot help but imagine how classy the interior of the Tardis console room would become with her as the pilot.
Time and its relative dimensions would never look better.

You Are The Quarry. 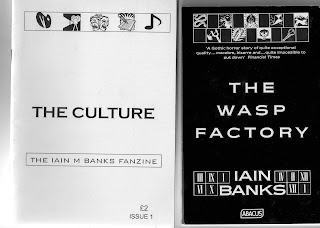 It was earlier in the year 2013 that the author Ian M Banks let it be known through a statement that he had an inoperable cancer and the chances were not good that he would see out the year. This sadly proved to be true and he passed away on Sunday 9th June. It was such a short time between the wider world becoming aware of the seriousness of his condition, gall bladder cancer, and him succumbing to the disease. I can not imagine how hard this must have been for his loved ones and those close to him. Friday past I finished reading his last completed work The Quarry, released the month of his passing. I did not know what to expect from that book. I Certainly not the smallness of the world it takes place in. The quiet, and at times not so quiet, intimacy of the enclosed world of Willoughtree House, decaying and crumbling, perched on the edge of a quarry readying to swallow it whole. In that house a group of old friends gather about a friend dying of cancer. They are also looking for a mysterious video tape from their shared past that throws a shadow over all their futures. This is not the whole story. This is an Ian Banks novel after all. The dying man Guy and his young son Kit rail against the fate their lives together has brought them to. Their situation feels heart achingly real, like two candle flames flickering in a wind that threatens to extinguish them both.
I read The Wasp factory ,his first published work so very long ago. Probably around '85 or '86. I remember how even in my know it all youthful arrogance I was a bit taken aback by some of its content. How I was even a little shocked by this artsy looking paperback I picked up in Harry Halls Bookshop in Gresham street. A couple of years later I read Consider Phlebas  for the first time. It sort of became the yardstick by which I measured my enjoyment of epic science fiction writing. You know IT WAS GOOD BUT NOT AS GOOD AS CONSIDER PHLEBAS. That lasted a good wee while. Until I read Use Of Weapons. Which then became my new favorite Ian M Banks. I think I was a shallow reader lacking wider references or sophisticated tastes. I just knew what I liked and The Culture books were so damned good. I even got to meet him a couple of times. At the readings he did at Waterstones Bookshop in Royal Avenue, Belfast. He was very personable and always chose interesting and entertaining excerts to read for the amusement of those attending. This was off course many years before there was even a glimmer of the purple hues of geek chic so the whole evening may have appeared terminally dull to the cooler eye. Yet we were more than happy in the cloistered trappings of the freshly published Banks. We were not friends. I was just a fan who would attend his readings given a chance. Just the Face From Space in the back row looking with utter admiration at this worldly wise whisky lover with a brilliant mind gifted to the world for a short time. All twenty seven of the books he had published in his lifetime are scattered about my house in different places. All of his books are worth seeking out. All of them worth keeping and sharing. The Quarry is a worthy addition to that remarkable body of work. The twenty eighth book is about to join them.
There will be no more.