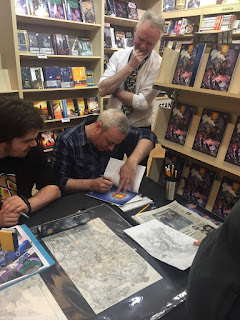 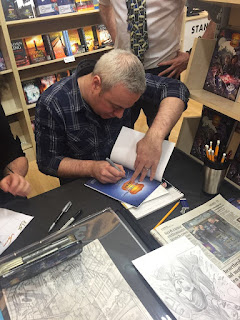 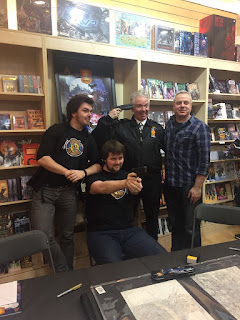 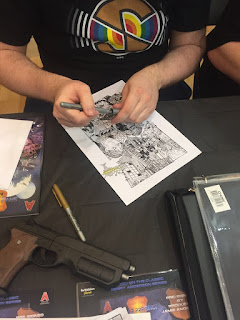 What a super Saturday afternoon. So many happy faces all turning out for one super comic; Space Precinct Reloaded. Connor Flanagan described it so well when he talked about the joy off working on the title, being given the opportunity to add to the Anderson Telly legend in his own way. There was a little bit of Gerry Anderson's vision in the lives off every kid who grew up in this part of the world.back in the day, and I suppose for the ages to come.
Was knocked out by the most amazing portfolio of Dalek sketches Chris Thompson had published. Just another pleasant surprise on an afternoon blessed with many.
Felt my own enthusiasm for comic book people reloaded. 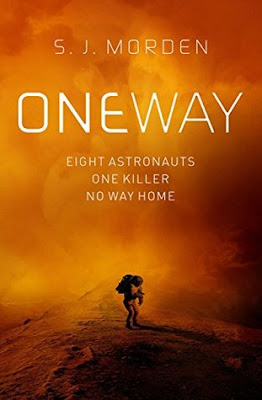 I have read and seen that much stuff with regard to all things Martian I almost forget we have not as yet landed a man there. Remembering The Martian, the book and the film, is almost the same as remembering an episode of The Living Planet or some such documentary about life on Earth. It just feels at this point we have been there and had any number of scrapes and hi-jinks. So attempting to assert myself in a thoroughly modern stylee I pinch myself and remind myself that this is all ahead and still in the domain of the speculative, however convincingly done.
And One Way is a very convincing addition to that sub genre of science fiction literature.
In much the same way as the treatment of deportees i days of yore we are at it again in days yet to be. Convicted criminals, lifers buried in the system, are offered the chance to go to Mars , to prepare the way for the colonists and scientists to follow. To get all the hard dirty work done ahead of their arrival. Building the habitats, planting the seeds for articial enviroments, draining the swamps, so to speak.
Our neighboring planet has a ferocious terrain. To say it is inhospitable to humans is to say the surface of the sun is hot. We can trick out a life on its surface, using our wits and the artifice that is a faux habitable station. No margin for error though, there is no mercy in space. To describe it as a Devils Island in space is to undersell the scale of  its dangers. you only draw breath there by means of the most advanced breathing and re-breathing equipment. It like you, has a long distance to travel even before it is put to use and should it fail its manufacturer is quite some distance away. There are no B and Qs on Mars, well, not yet.
In the short bio of its author on the fly of One Way I learned that SJ Morden is a rocket scientist and a doctor, who also has degrees in geology and planetary geophysics. He almost certainly knew enough before starting this book about just what it would take to get life too, and sustain life on, Mars. What was probably less certain was if he could write convincingly flawed human beings caught in extremis. Would he be able to write what amounted to a novel about the survival of a bunch of anti-heroes on the surface of a world that would kill all of them in a blink of an eye and make them sympathetic and relatable? Sent there by a company who sees them as no more than a ship load of bio-organic tools developed to do a series of jobs they had been compelled into performing by the bad shape of their lives.
And the answer to that is; yes. Yes, yes and yes he did.So much so he had me up to the early hours reading on and on, determined to find out just what was going on and how much in human lives and human morality it was going to cost us to send a disposable workforce to the stars. I think it is SJ Morden's first book and he has hit the ground running with this one. Despite its modernity it has a great boy's own adventure quality to it.And now that I have read it its my own adventure too. 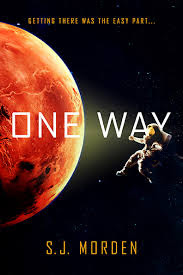 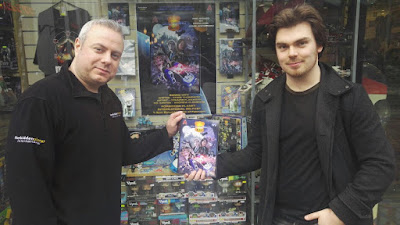 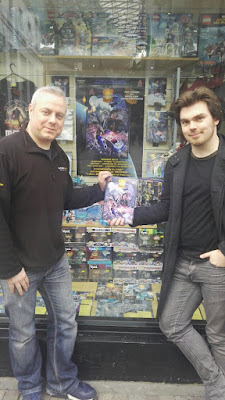 Very pleased to say that my chum Connor Flannagan is doing a signing for his new space Precinct Reloaded comic this Saturday at the Forbidden Planet Belfast Store. All are welcome and many are expected. If you fancy a very modern take on a great slice from the fabled Anderson family of telly shows please come along and support not only local talent but a great cauldron of creativity. Hurrah!
Chris Thompson has delivered a tight exciting script and Connor more than delivers the goods. Jamie Anderson himself and editor Andrew Clements are involved in so much more than an editorial sense. They have leant their goodwill and support in buckets and all involved have delivered a one shot that will prove to be a keeper for not just anyone lucky enough to be here on the day but who may well pick the title up afterwards.
In space everyone can see you smile.
Posted by Malachy Coney Curiouser and Curiouser at 06:47

Fiend Without A Face. 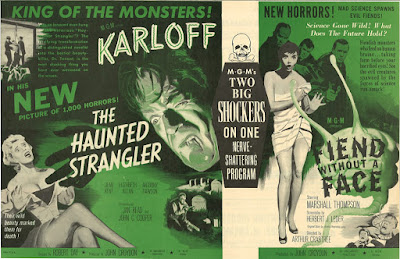 I only ever knew this film from a full page still in my Hamlyn Book Of Horror Movies( My horror movie bible growing up.) I never saw this movie growing up and I was always intrigued by that black and white still of someone being attacked by a living brain with a spine like tail. Well, if intrigue is the right word. It is a movie about a string of mysterious deaths that take place in the forest surrounding an army base and the man made monsters that stalk the leafy territory. There is very creepy foreshadowing for the fiend without a face. A horrific thumping and gurgling sound you just know was made by no creature found in nature.
A brilliant scientist has made a terrible mistake and brought into being a creature from the id to rival any beastie to be found during the classic Philip Hinchcliffe era of Doctor Who. That is the era most people think off when considering classic Who. Without being able to put a name to it.
The movie has a great base under siege feel to it and also manages to maintain a powerful sense of ordinariness about it. As the local population seek to discover the monster in their midst. The movie is a British made affair from 1968 and has a strong Doom Watch quality to it. The notion of bad science done for the right reasons with disastrous results. the night time forest scenes are particularly effective and their is a truly horrific scene when a hunter who has had his brain drained stumbles into a public meeting moaning and crying like a demented child. It is the gruesome aftermath of the creatures assault. One which usually ends with the human brain and spine being drawn from the victim.s body. It is Giger-like in intent. Before that was even a notion in any film makers mind. it would be another decade before such grandly imagined world building would take place but the world was waiting.
The new frontiers of science often begin as uncharted wilderness. We fill in the gap and we discovers wonders and horrors in almost equal measure, with the scales more often dipping towards the terrifying. Ain/t discovery great.... 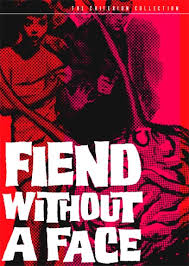