A Trick Of The Tail. 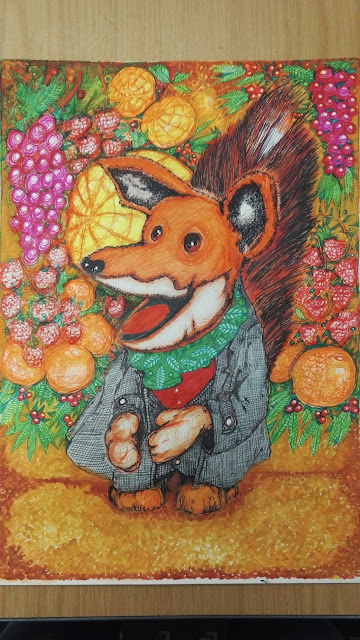 The toughest thing about doing this sketch of Basil Brush was getting him to stand still while i scribbled away. He is a master of the theatrical anecdote , you know. It comes quite naturally to him. He is a born story teller and a great thinker. Like a small hairy orange Stephen Fry, so to speak. I have off late been trying to fill a few gaps (Oh er, Madam.) in my Basil Brush annual collection. they are lovely books. with artwork and stories by the great Peter Firmin.
I would have asked Basil to sign them for me but I feel he is a pal now.
It seemed a trifle gauche.
And I much prefer a gauche trifle.
BOOM!BOOM!
Posted by Malachy Coney Curiouser and Curiouser at 08:45 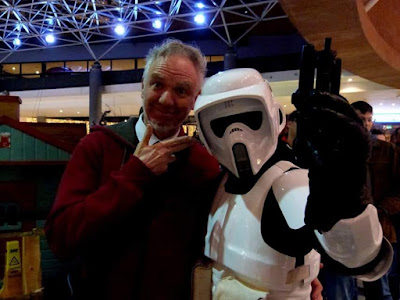 Bumped into the notorious Hedge scout herself at the frankly spellbinding Star wars Rogue One Preview. Bad company but also the best of company. There were a number of imperials (including the big bad Darth Vader himself rasping about in that louche way of his, strangling a few people here and force slamming a few people there.)in the screening and a surprising few Rebels. Nothing to do with politics off course, the bad guys always seem better dressed.
Loved the film. Talk about suspension of belief. Even my aged palette was satisfied, Felt transported to a galaxy far far away. And a time that seemed passed away. 1977 all over again.
Best part of the evening was watching my pal Joseph dragged upfront to lead a chorus of the John Williams Star Wars theme. There he was waving his arms and singing away like a returned Prince Of Wallachia as the audience tunelessly did their best.The Son Of The dragon himself.
You can see Vader himself lurking about in the background of this photo. Force chomping on a sweet and sour spider.Even Dark Lords Of The Sith have a sweet tooth it seems. 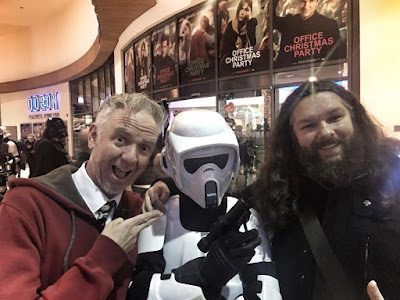 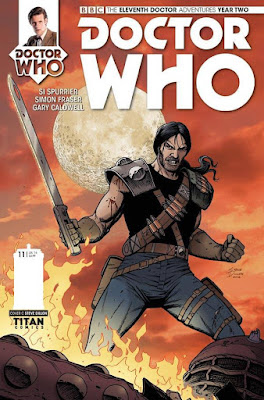 Picked this issue of Doctor Who Eleven Issue Eleven. The one with a variant cover drawn by Steve Dillon. Of his own character and creation Abslom Daak. A small but poignant reminder of the great loss of Steve Dillon. That wonderful artist, that wonderful man. It is not that long ago that Si Spurrier reintroduced the feared Dalek killer to the Doctor Who multiverse continuity and it all seemed so well timed with Steve enjoying a new burst of creativity and a welcoming and growing  respect for an artist who never let his fans down.
And a man who never let his friends down.
Posted by Malachy Coney Curiouser and Curiouser at 08:44

Gift From The Gods. 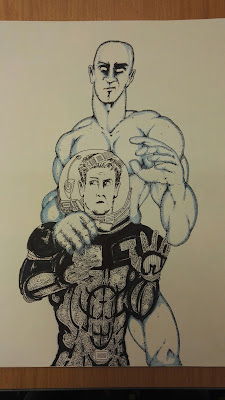 (From my sketch book.)
With a Prometheus sequel in the works and bits and bobs popping up on line, a production sketch here, a set photo there, a bonkers rumour everywhere, I went looking for my idea for a new direction involving the David androids in one of my old sketch books. In my version the android becomes a Ryan Android, a Ryan Kwanten android. for if you are seeking perfection in form and an almost Michealangelo level of beauty then surely look no further than the sexiest Australian on the planet.
Imagine him in his space speedos wrestling a big Promethean engineers in a loin cloth...
I know I am.
Posted by Malachy Coney Curiouser and Curiouser at 08:43

What A Bear Really Does In The Woods. 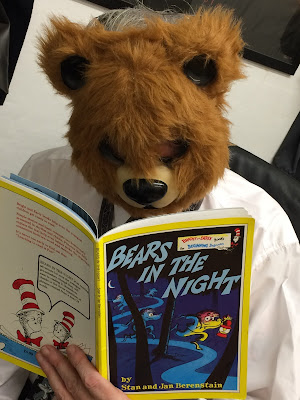 Tense stuff. This is the closest Dr Seuss came to Jason Bourne adventures.
Posted by Malachy Coney Curiouser and Curiouser at 04:37

BJ And The Bear. 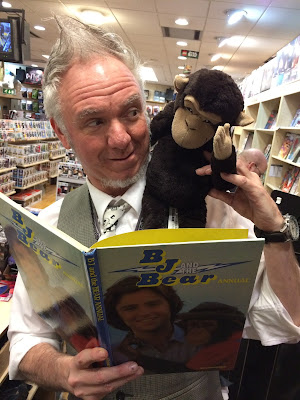 Milo learns of a time when the idea of a trucker monkey was not some remote daydream but a career option. I think there were a couple of seasons of BJ And The Bear way back in the day. I do not have any of the episodes on video tape or on DVD so whatever Milo is going to learn about the show is going to have to come from this old Christmas annual. I always think of those books as Christmas annuals by World Distributors or Grand Dreams. Used to love seeing the shelves in Harry Halls Bookshop fill up with them.
Now that really was a season to be jolly.
Posted by Malachy Coney Curiouser and Curiouser at 04:37 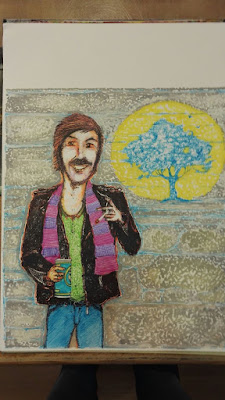 Anthony Captain and the Genesis album Wind And Wuthering are inseprable in my mind and somehow they became conjoined when I attempted to sketch him. I Miss Anthony a lot. His sense of humour and appreciation for the absurd and fey nature of life with its many random cruelties and great joys. Music was a huge part of his coping process and he shared so much of it with me.
For instance Paralysed by The Lone Stardust Cowboy..
It almost finished us both off. Listen to it sometime. But be careful.
Its a killing tune.
Posted by Malachy Coney Curiouser and Curiouser at 04:37 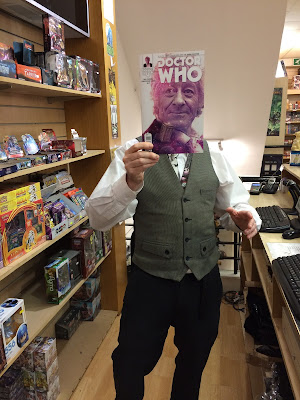 Was really touched emotionally by this 3RD Doctor third issue cover. A lovely photo cover of the lovely Jon Pertwee. Oh I so wanted to travel with this incarnation of The Doctor.With his old school charm and dashing ways and that protective billowing red cape, he would never let you down but he would always expect you to be at your best and pull your weight. His cape billowed, his shirts billowed and even his hair billowed.
What A Doctor! 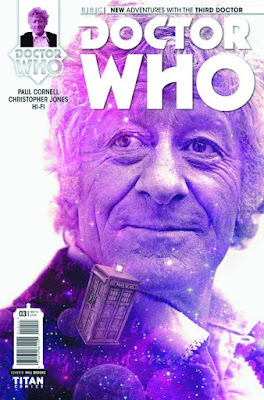