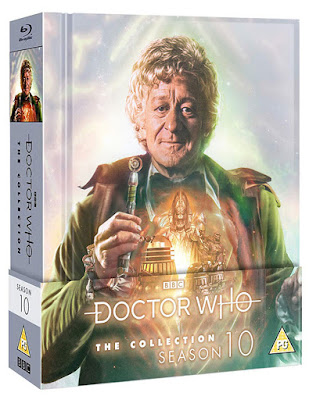 What a treasure, beginning with an epic team up up and ending in a heart breaking farewell, its a vintage season, this one is, as Yoda would put it. 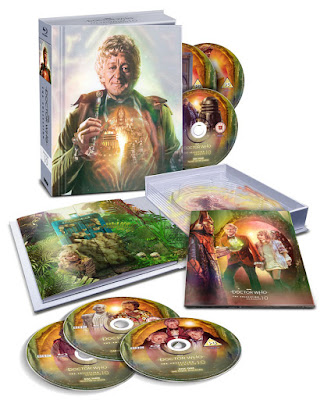 Bottom Of The Sea. 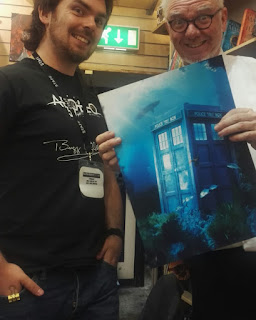 Was gifted this dreamy Tardis picture by artist Chris Thompson. The Tardis parked at the bottom of the sea. It is just a dreamy bluey wash that rests so easily on the eye and in ones imagination.Sadly, this now makes me think of the actor David Heddison from Voyage To The Bottom Of The Sea, who passed away this week. One of his earlier roles in The Fly was the true stuff of nightmares, who could forget his tiny pleas for help as a monstrous garden spider moved in for the kill...
Sorry, folks. This started off as one thing but ended as another.
Life is a bit like that.
All the time.
Posted by Malachy Coney Curiouser and Curiouser at 03:26 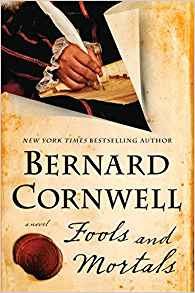 Alas, poor Richard Shakespeare, we knew him not at all. So said no-one in particular, ever. Consider the plight of the less talented sibling, in any situation where ones chosen profession causes brothers to bounce off each other, flashing past each other on a sliding scale of abilities and station. What it must be like to try making a living while living in the shadow of that sibling. Then factor into that uneasy balancing act the very notion that one of the brothers is the most talented playwright ever to dip his quill, so to speak.
Richard Shakespeare is a young player eager to demonstrate to the world his abilities and charms as a leading male who finds himself continually confounded in this ambition by his creatively brilliant but emotionally mercurial brother in a succession of female roles. He wishes to play a man while his brother will only cast him as a woman. This is not an unusual a situation as it may sound to the modern ear as women were forbidden to perform on the stage during the Elizabethan era. So many a young man donned female apparel as their youth allowed them an easy androgyny. As Richard grew older he felt less comfortable in the roles, longing for tyhe part of the handsome lead. a longing thwarted by the will and wit of his brother Will.
Bernard Cornwell the Elizabethan era to life, one can almost smell how unsanitary the great city of London is. It must have reeked like a huge open air sewage treatment works as all the human and animal waste was going nowhere. In the absence of an understanding of sanitation ghosts, spirits and devils were credited to a large degree for the resulting miasma. Thirsty people are poisoned by the very water they use to assuage their thirst, every home harbors potential risks to health and yet for all this it is a progressive age, particularly for the arts. painting, poetry, printing and performing boomed.With a rich vein of belief in the supernatural and the superstitious running through all. This was truly the era of The Faerie Queen.
This was also a time that when a person looked to the skies over head they saw a sea of stars, with no world wide ground based grid of man made illumination to dull such vision. Small wonder beliefs ran to the wondrous with a canopy of twinkling stars so visible above.
William Shakespeare has been commissioned to perform a new play for a private audience. A Midsummer Nights Dream will be seen for the first time and Richard has been assured a part, a man's role, a part he has made no secret of his longing for, and his brother has been listening. In that way that only a genius does as Richard will learn as the players come together to rehearse.
Bravo to Bernard Cornwell for this very entertaining read. He understands the complexities of brotherhood and the pain that runs deep when siblings seek to offend.
Dare I say it?
Why the hell not...
Encore, author, Encore! 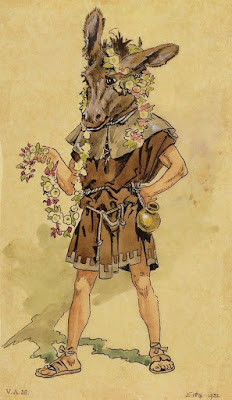 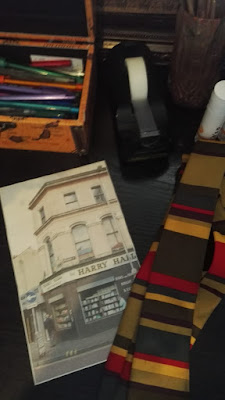 While moving some books I came across a clipping from a newspaper, one that was a photograph of Harry Hall's bookstore back in the day. I never saved the rest of the item but I suspect it was an article about declining footfall in the city center. I vaguely remember a grim article about the threatening tsunami that is the shadow of online shopping.
Anyway, it reminded me that when I was a boy my dream job would have been to work in Harry Hall's Bookshop(After the position of Scientific Adviser to UNIT , off course.). I thought Mister Hall had the best shop in the world. Well, the small amount of the world I was familiar with. I always seemed to find something, no matter how little money I actually had. Which was always; not very much. Pan anthologies of horror, Target doctor Who novels, most of the Puffin books of my childhood, every kind of comic you can think off, British and American and thousands of horror and science fiction titles at affordable prices. Condition was never really important to me. Sure, I liked to get things in good nick but my entire world has always been a bit frayed around the edges, so I did not mind so much as long as I got to read whatever it was. I had no notions of collectability beyond reading, experiencing the book or comic in the moment and I always got my moneys worth.
Even its location seemed cool to me, on the corner of the bottom of Gresham Street , like the prow of a stone ship facing forward. The interesting exterior was but a prelude to what could be found on the inside. always with a few temptations on view in the window display. you never knew what you were likely to find on display, what someone had sold, what Mister Hall had bought in.
And there was Mister Hall himself, what a character, larger than life to me.Tall and solid, it was his shop and you knew it. I looked up to and respected this man so much. Here was a man who understood the book trade and built a comfortable domain on that hard work and knowledge, an undiscovered country of second hand books. he treated all his customers the same way, with courtesy , good manners and respect. And he was not afraid to stand up to bullies. I saw him do it once and..well, he handled it like a gentleman,old school but leaving no doubt who's shop it was.
I did ask him for a job. Quite a few times actually. A part time job? A summer job? A work experience position? A cleaner? Anything? I hoped as I grew older and less foolish (Ha!Like that ever happens...) he might see that I would make a good bookseller.
I never relented and neither did he.
One day he did explain to me why he would never give me a job, he told me the reason and I understood it completely. I understood why it was never going to happen and there was nothing I could do to change that. There was such a simple truth there I decided to let it go and resigned myself to finding something else in this world to do. Something else to aspire to.
It did not diminish my appreciation and love for his store one iota. In fact it seemed to make it all the more precious, knowing I could never be part of it. I had to accept that it would never be me bringing order to the old comics or the horror section. it would never be me sorting out the crime fiction from the crime faction, arranging section in some way that would make perusing them all the more enjoyable and more likely to generate sales.
You know, its never really left me. Even after fifty and more years on this planet I still have vivid dreams that I am back in that store, stepping in through its door from the rain, so familiar with the layout of the shelves, the surprising quality and quantity of the content, like arriving home. Silly stuff really, no adventures or whatever, just me putting out stock, tidying up. So real, like a memory, perhaps a bit like time travelling.
Maybe the only form of time travel that is real. 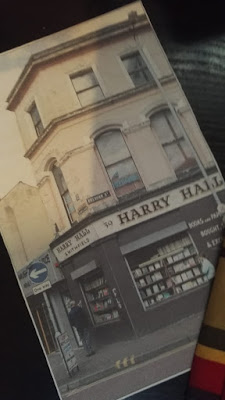 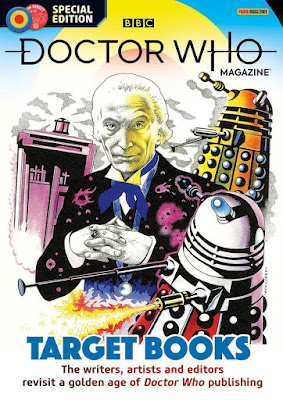 Just look at this. What an embarrassment of riches..
And it turned out to be as good as it looks.
Posted by Malachy Coney Curiouser and Curiouser at 03:25 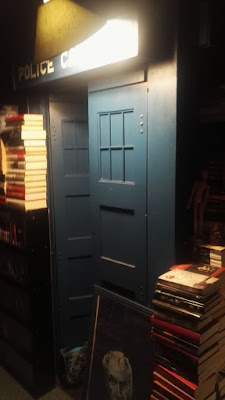 In a corner of my house..
Do not judge, have you ever tried to park a Tardis? 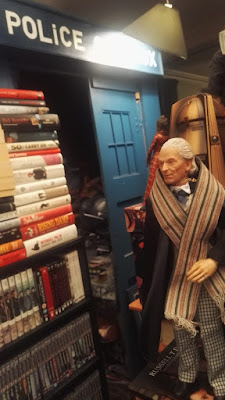