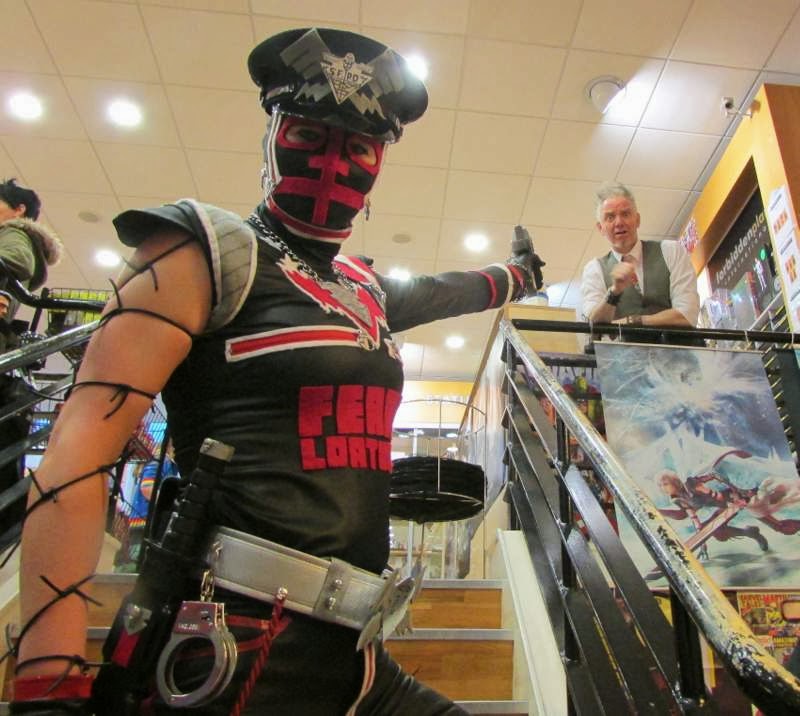 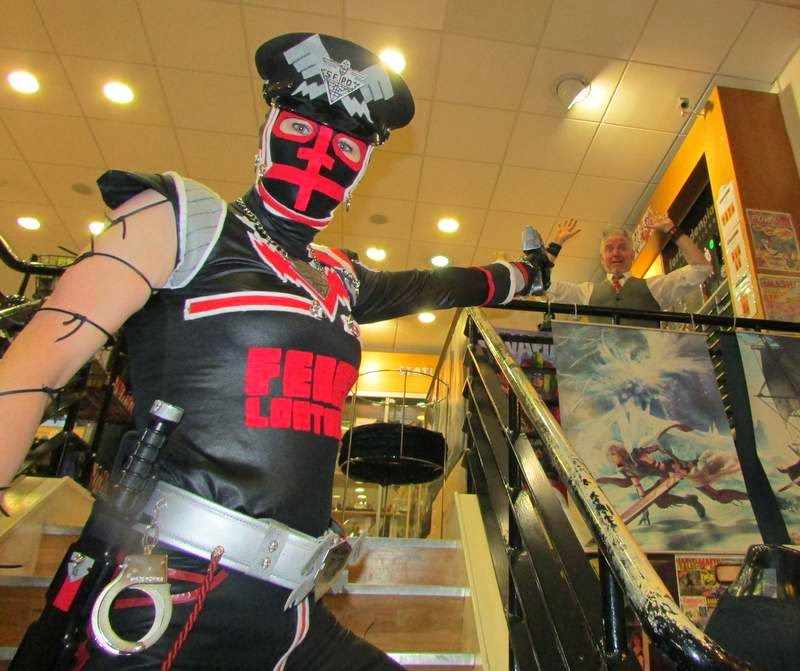 Holy Gravy Chips!Its that costumed vigilante hero hunter himself Marshall law!Thank goodness there are no heroes under this roof.A'int Nobody Here But Us Chickens!
Cheers Joanne you were amazing.
Posted by Malachy Coney Curiouser and Curiouser at 05:09 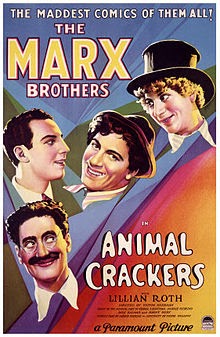 It started off as one of those nights when the inflammation in my joints felt as though Thor had used my knee caps for a set of bongos ( I had been trying to reduce the effects of the swelling using a bag of frozen peas and Maxidrol) and instead of navel gazing I stuck on The Marx Brothers movie Animal Crackers and boy did it take me out of myself. Groucho plays Captain Spaulding an explorer returning from deepest darkest Africa( the Africa of Betty Boop cartoons I suspect) and attends a party thrown in his honor by wealthy socialite Mrs Rittenhouse( played in stately fashion by the equally stately Margaret Dumont). Enter Harpo as a character called The Professor, Chico as Signor Ravelli and Zeppo as Horatio Jameson. Yes, all four of the brothers in this a film they shot in New York way back in 1929. All round chaos and mayhem ensues on this millionaires estate with the hunt for a forged masterpiece while no one at the party is quite what they seem. All the brothers get a chance to shine, showcasing their various talents. Groucho is on tremendous form. His word play is just dazzling and his surreal asides to the audience in a Beckett like drone break the forth wall in style. In a scene involving a rambling and bizarre letter to his lawyers which he dictates to Zeppo we see the skill involved in playing the straight man so ably displayed by the very handsome Zeppo. Their brothers finger's dance across harp strings and piano keys lending the whole affair a soundtrack that could only have been provided by themselves. Chico plays a spellbinding composition on piano that actually gave me goosebumps as I watched him perform it. The DVD allowed me to pause, zoom in and watch in awe as his long delicate fingers danced across the black and white ivory keys rattling out a version of Sugar In The Morning which goes on and on and round and round because he cannot remember how to finish it. Amazing. And off course every scene with the mesmerising Harpo had me entranced. When he is in a scene I find it difficult to take in what others are doing.
Animal Crackers was released in 1930.
Eighty three years later I am still laughing.
I think the world needs the Marx Brothers now more than ever.
( Harpo from my sketchbook/Animal Crackers movie poster property of Paramount Pictures ) 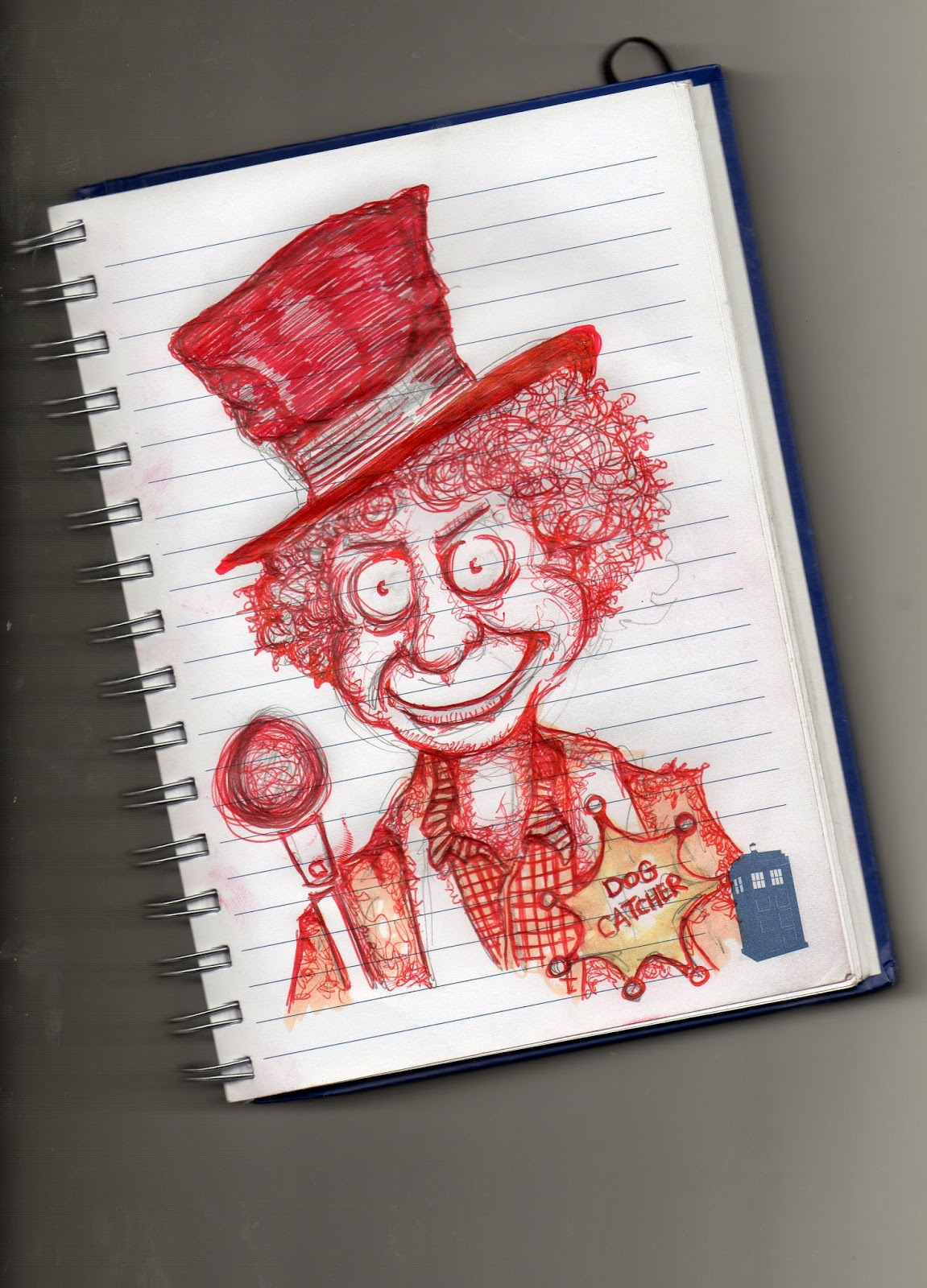 The Big Round Ring Of Life. 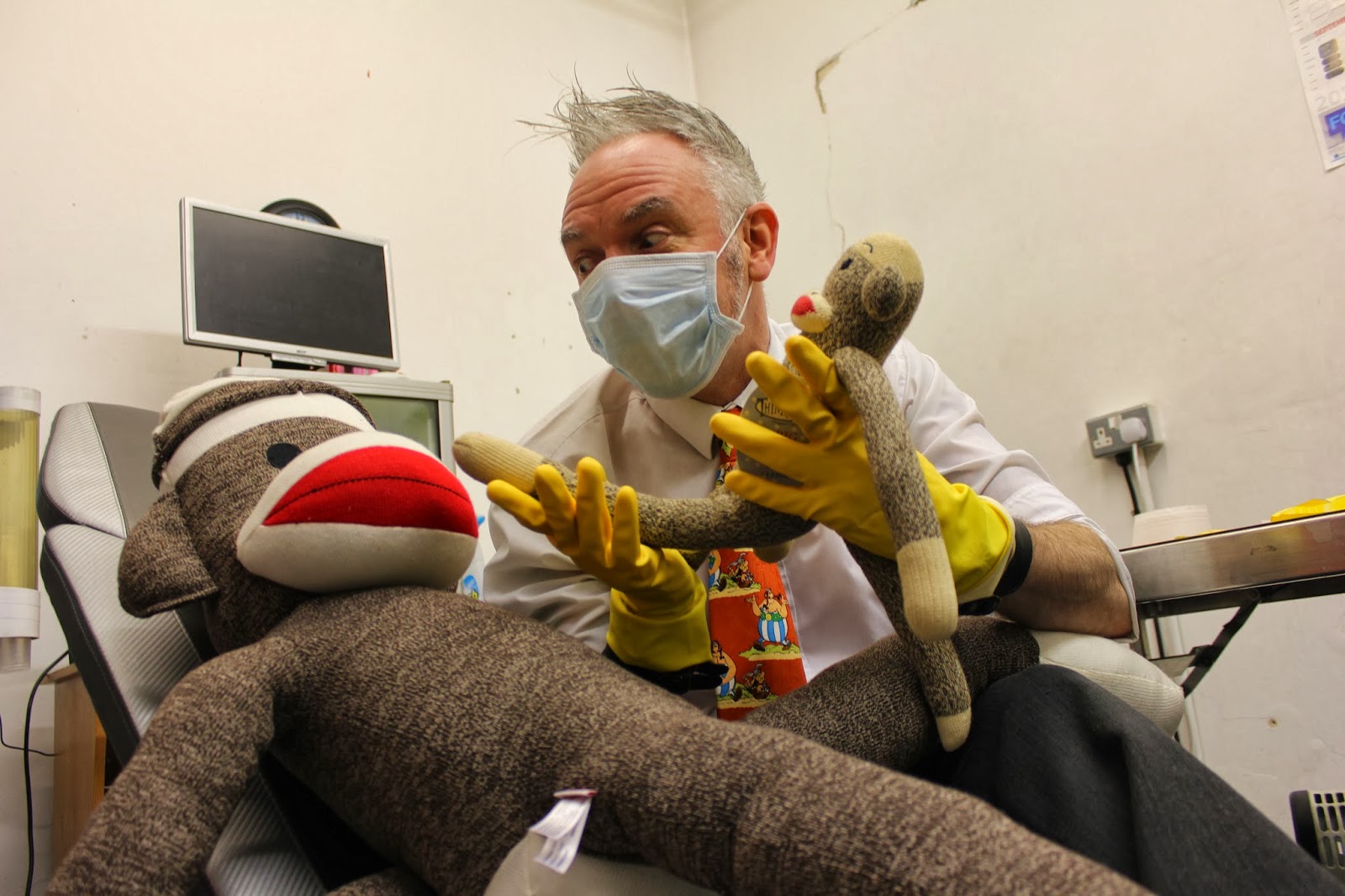 Oh What A Glorious Feeling Oh What A Glorious Day!I Just Delivered A Baby!Everything Is Going My Way! A heavily pregnant Sockmonkey visiting Belfast from her home in Nantucket went into labor whilst browsing round a charity store I also happened to be in. I had been trying to find a second hand pair of long johns on account of it being so cold lately and I felt the time had come to go all Wallnut Grove. It is actually quite hard to find a decent pair of second hand long johns with a functioning flap. Second hand I can deal with but I draw the line at a wonky flap. IS THERE A DOCTOR IN THE STORE? the lady behind the counter shouted. I am not a doctor off course but I do have some unusual medical skills( none of which are recognised by the British Medical Council but there are a few chemists who have got my number) and I was able to deliver the baby. It was a nerve wracking but entirely life affirming experience, I have never felt more connected to the web of life we all dangle in like spider snacks. Mother and baby are both fine and to honor the customs of the old whaling town and close community they are to return to I got to chose the babies name, his name is Darwin, Darwin Sockmonkey( all sockmonkeys have the same surname). As I said, they are a close community.
Posted by Malachy Coney Curiouser and Curiouser at 07:10 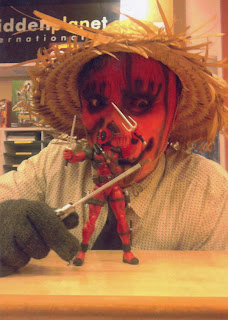 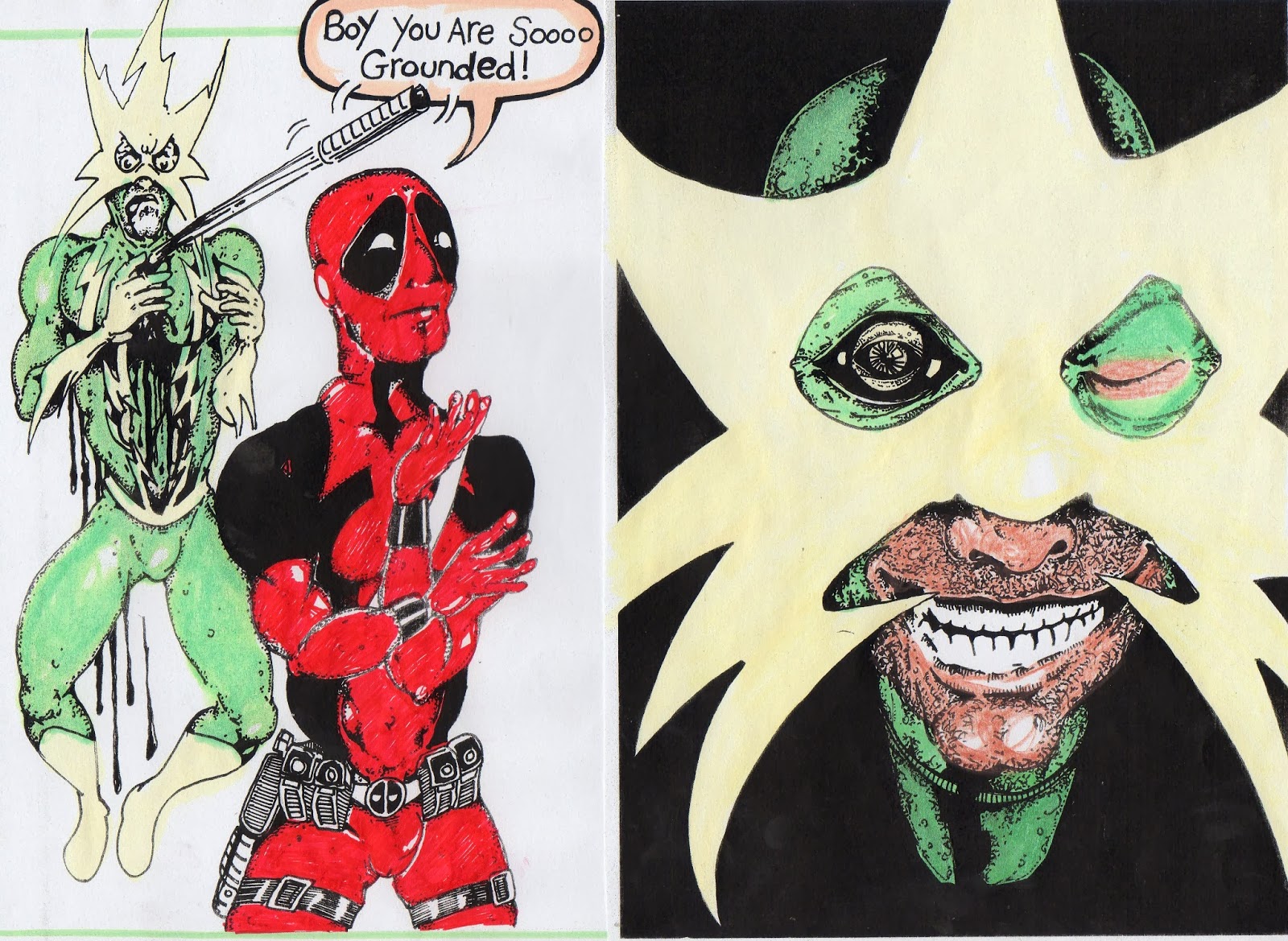 (From my sketchbook) This is Mister Scratch, the scarecrow king. He is a mysterious masked figure, as you can see, who watches over all of Belfast from the panoramic point of a field high up on the Cave Hill. He will answer the distress call of his hometown in its hour of need with his unearthly control of crows and his ability to do amazing things with corn based cereal products. Here he is putting that Deadpool character(copyright The Mighty World of Marvel) in his place using his Uncanny Comb of Calamity.FZZT!
Speaking of calamity I am reminded of of my attempt to get superpowers; inspired by an issue of the Amazing Spider-Man that detailed a confrontation between himself and Elecktro ( in which Spidey eventually stopped him by webbing his wrists to his ankles thereby earthing/fuzing him FZZT!). I was knocked out by Elecktro's cool costume with that striking lightning bolt mask and the form fitting snugness of mighty yellow and green. As a child I had thought it perfectly normal to assume me and all my mates would grow to manhood and possess these heroic physiques which filled the pages of superhero comic books which boldly lend themselves to such outfits. Sunken chests, droopy postures, knobbly knees and pot bellies belonged in the pages of The Dandy and the Beano and not the full color fantasies that were America's greatest cultural export.FZZT!
After gasping my way, several times, through this epic confrontation I determined to get the power to shock others and to move with the speed of a thunder bolt(not actually an ability Elecktro had but it occurred to me, using the hard won childhood insight and wisdom that constantly got me punched, he probably should be able to mimic the speed with which natural lightning moved) To this end I built a pyramid of furniture in the middle of one of our upstairs rooms directly beneath a light bulb which hung from the center of the ceiling. Climbing very carefully up this wobbling Tower of Babel I stretched as high as I could, unscrewed the bulb, licked my finger and stuck it up into the light fitting. FZZT! I felt a slap that seemed to throw me on to the bed where I rolled into a gap between it and the wall. It was a very unpleasant experience and my finger had ended up all black and sooty. Yet when I pointed that blackened finger at the old wardrobe on the other side of the room nothing happened. This was very disapointing as I had intended to disintegrate it with an arc of electricity thrown from my finger. It seemed this was not to be my Origin story after all and I had failed to become the super powered individual  I longed to be. I decided not to mess with live electrics again as I had an uneasy feeling I had narrowly dodged a messy bullet. That weird invisible slap had quite put me off. Soon after I did become a costumed hero. Battery Boy. By diligent and relentless training I developed the ability to throw old batteries with surprising accuracy. Not quite the same thing as bolts of electricity I know but this was real world Belfast not comic book Manhatten.
I do not have a case book of adventures to pour over in my midnight lair but I did once save a chicken from a fiery death. A mean spirited neighborhood boy had a live chicken in a wooden crate which he placed on a fire he had built in the alley behind Etna Drive intending to burn the chicken alive. I was really shocked by this terrible cruelty and I...well, I guess I sprang into action as Battery Boy.  I drove him off whilst pelting him with the old ever ready batteries ( Although I startled myself when one of them connected with his cheek bone. Not as startled as he was though.) He ran off screaming threats but weeping, as bullies often do. I carried the chicken in the crate round to Jamica street where I showed it to some workmen from the country who were working there. One of the workmen offered to take the chicken home with him that night where he would release it to live about his country home. A good life for a chicken he reasoned. I agreed to this and he cemented our exchange by giving me a huge biscuit his wife had baked for his lunch. Now I know one should not seek reward for good actions but by God it was the biggest ginger nut I had ever seen.
I think perhaps the fate of the chicken was but an appointment with death but delayed. It probably ended up that night plucked and in a pot and that that workman had cleverly distracted me with his big biscuit. I am easily distracted. This may have even permanently impacted on my personality as a friend recently remarked I would do anything for a biscuit.
Well there you go. Not exactly The Fantastic Four meeting Galactus. More Howard The Duck versus The Hell Cow. Yet I think it does demonstrate the positive influence of comic books on impressionable minds.
Probably.
Posted by Malachy Coney Curiouser and Curiouser at 01:09

Down in the sewers at midnight. 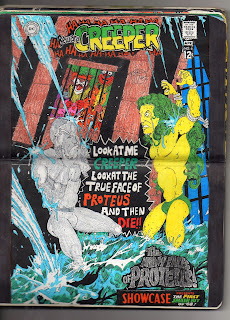 (From my sketchbook)Homage to an old DC Showcase in my comic book collection from forever ago. One of Steve Ditko's DC creations in his post marvel phase. Totally bizarre looking character who haunts the periphery of Gotham City.I know the feeling. 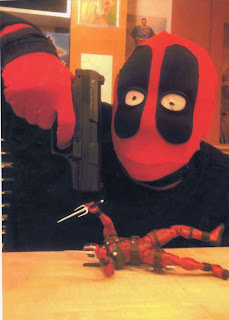 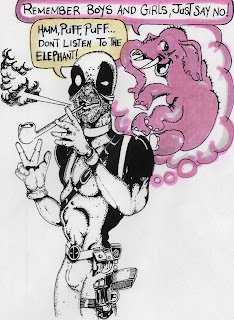 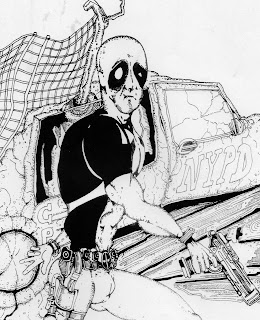 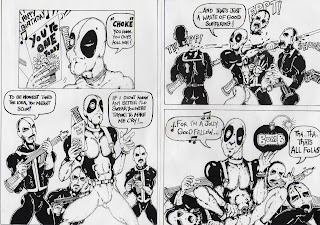 (From my sketchbook) Malpool(copyright Boobie-babble publications)Vs Deadpool(copyright Marvel Comics)The Merc With A Mouth vs The Sphinx Without a Secret. Witness the ballistic bombastic ballet of mercurial mischief and ask yourself IF A PEN BE TRULY MIGHTIER THAN THE SWORD THEN WHY MUST A PENCIL BE LEAD? Boy,that Deadpool costume is a snug fit. It is so damn hard to appear cool with the VPL of tighty whities. But as my old pal Socrates once told me during a game of Hemlock Roulette SPANDEX NEVER LIES.BOOM!BOOM!
Posted by Malachy Coney Curiouser and Curiouser at 01:29 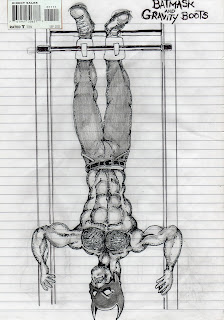 (From my sketchbook.) Went for lunch the other day and look what I found hanging in the door-frame. YOU SHALL NOT PASS this apparition rasped in a Christian Bale Stylee. So I did not, favoring a visit to Lunches To Go for a tuna and onion pasta box instead. I am not sure who it was, he was wearing a mask after all, a bat mask. I suspect it was not the cleaning lady. Yes,I know, I display deductive reasoning skills bordering on Sherlockian. Hurrah!The game is afoot!
Posted by Malachy Coney Curiouser and Curiouser at 04:19 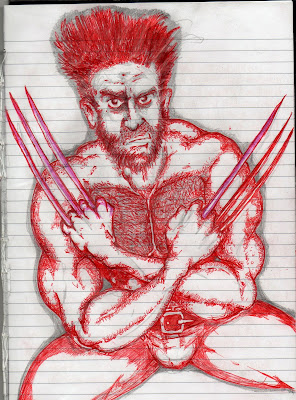 (From my sketchbook)Stormy start to Twenty Fourteen. Strong icy blasts of wind and freezing sleety rainfall. God help the homeless. I was off my feet. Inflammation in knee. Boy, do I need to regenerate. Spent best part of day watching a double bill of Hugh Jackman movies. The Wolverine and Les Miserables. A Christmas gift from a pal THERE YOU GO MAL BE THE FILLING IN A JACKMAN SANDWICH. The very thought is a gift in itself. Think clean thoughts chums and happy new year.
Posted by Malachy Coney Curiouser and Curiouser at 01:13