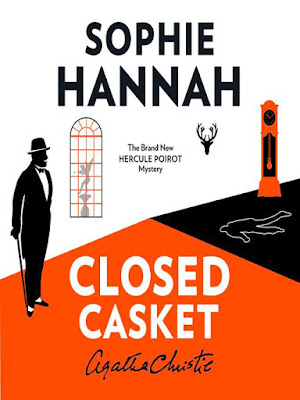 Sophie Hannah's second novel starring Hercule Poirot, following the hugely successful Monogram Murders she wrote five or six years ago.Read that first book and thoroughly enjoyed it so i did not hesitate when I came across Closed Casket on a recent book haunt. Such a nice looking book too, with a suitably tasteful jacket design, very art-deco in a nicely understated way.
Sophie Hannah is a very successful writer in the field of psychological thrillers and has also comfortably adapted to the Agatha Christie narrative sleight of hand, and her use of tropes to cloak the mystery paths she leads us, the reader, down. Agatha Christie elevated this form of character red herring to an art form, perhaps even adapting it as her literary modus operandi, certainly her tools of the trade.
In this novel Poirot is reunited with Inspector Edward Catchpole of Scotland Yard whom we met in that first book. This time their meeting takes place at a luxurious mansion in the country , at the home of a very rich children's mystery writer, who is most reminiscent of another real world writer; Enid Blyton. One of the only other British writers who could equal Agatha Christie in terms of quantity of books sold. Sounds a bit more meta than it comes across in the novel. The stage is set; an isolated  group of smarmy swarthy suspicious wealthy people are gathered for a celebration that ends with a corpse. It is how the hoi poloi used to spend all their evenings in the country, with food, drink and a brutal murder. And this is a pretty brutal murder with a head so badly beaten only the lower jaw is recognisable as being that of one of the guests. And so the game is afoot...
Like the first book I would suggest to the reader; listen properly. Which is to say give those little grey cells a bit of exercise. There are a few interesting twists and turns despite it being something of a fast read. I found myself looking forward to the moments Edward Cathpole and Hercule Poirot got together to share insights and notes. Only two books in and I have really warmed to Edward Catchpole. He is written as a good detective who has the potential to become a great detective.
Catchpole of Scotland Yard.
Works for me.
Posted by Malachy Coney Curiouser and Curiouser at 03:26