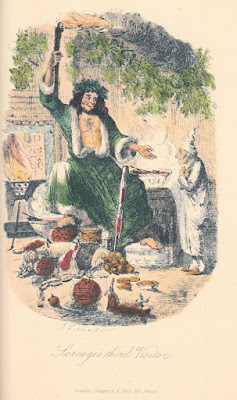 It is that time of year. it always is,really. When Ipick up Charles Dicken's A Christmas Carol and reread it. I do believe that one of its most enduring qualities is the rightly appealing notion that no human being is beyond redemption. Over the years since the first appearance of the story, it has possessed the ability to soften even the hardest hearts, suggesting that we are all capable of change, no matter how committed to a certain path we may appear. Ebenezer Scrooge is not even the worst of men, not even the worst character Mr Dickens ever created. And for all his faults there is a wicked humour at play in the pre-redemptive old curmudgeon. For instance when he faux mourns the passing of the various Victorian institutions set up to punish the poor for being poor, thinking the world a lesser place without the presence of a character building treadmill.
It is a familiar tale off course; Over the course of one night Scrooge is visited by four ghosts. The ghost of his former partner Jacob Marley, the ghosts of Christmas past, present and Christmas yet to come. Scrooge gets to revisit the early points of his life where he chose to take a different path from the one that would have best enriched his heart and soul, the two unquantifiable repositories of of the better angels of our natures. He also gets a glimpse of the here and now, of the world that lies just one step away from the closed cold circle he inhabits. Most scary though is the view of his path to a lonely gaping grave the unspeaking ghost of what may be gives him. All in all, it proves sufficient to make a man change his ways and Scrooge achieves the near impossible for him; Happiness. 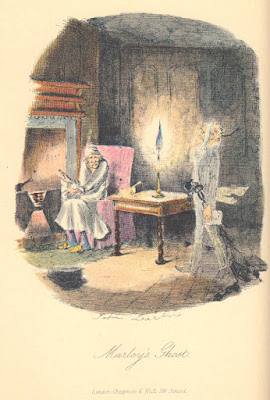