A Jesus And Daisy Chain. 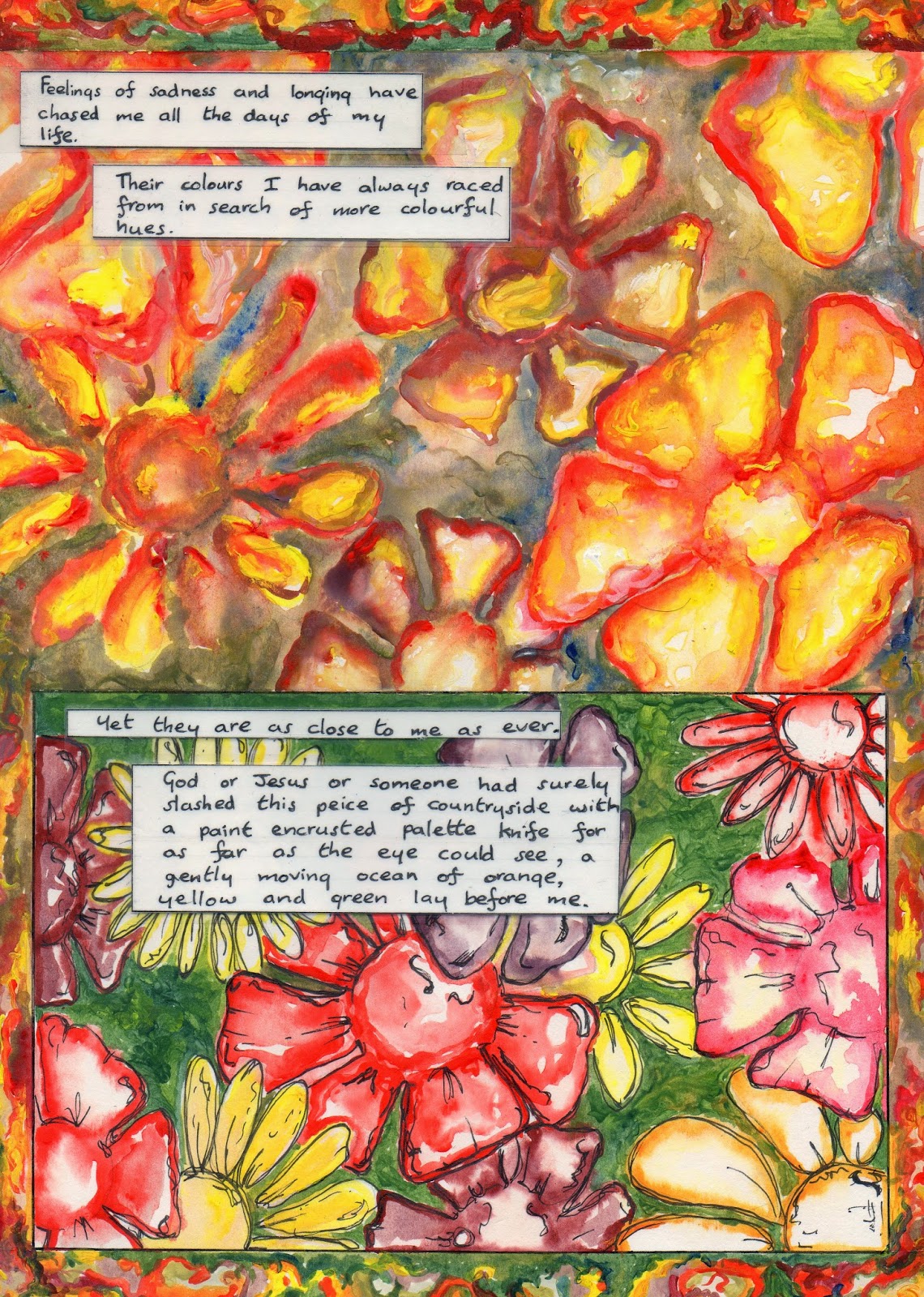 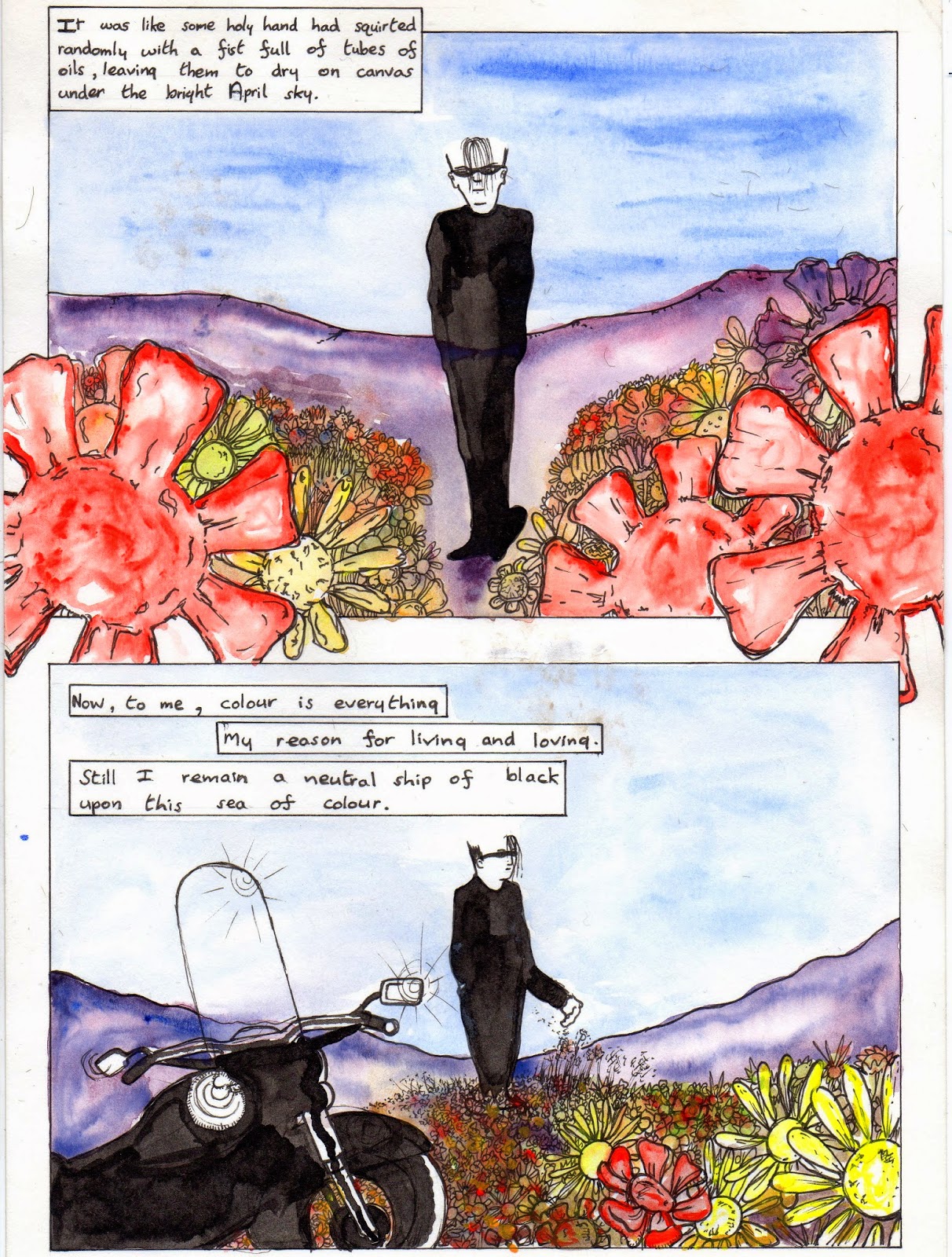 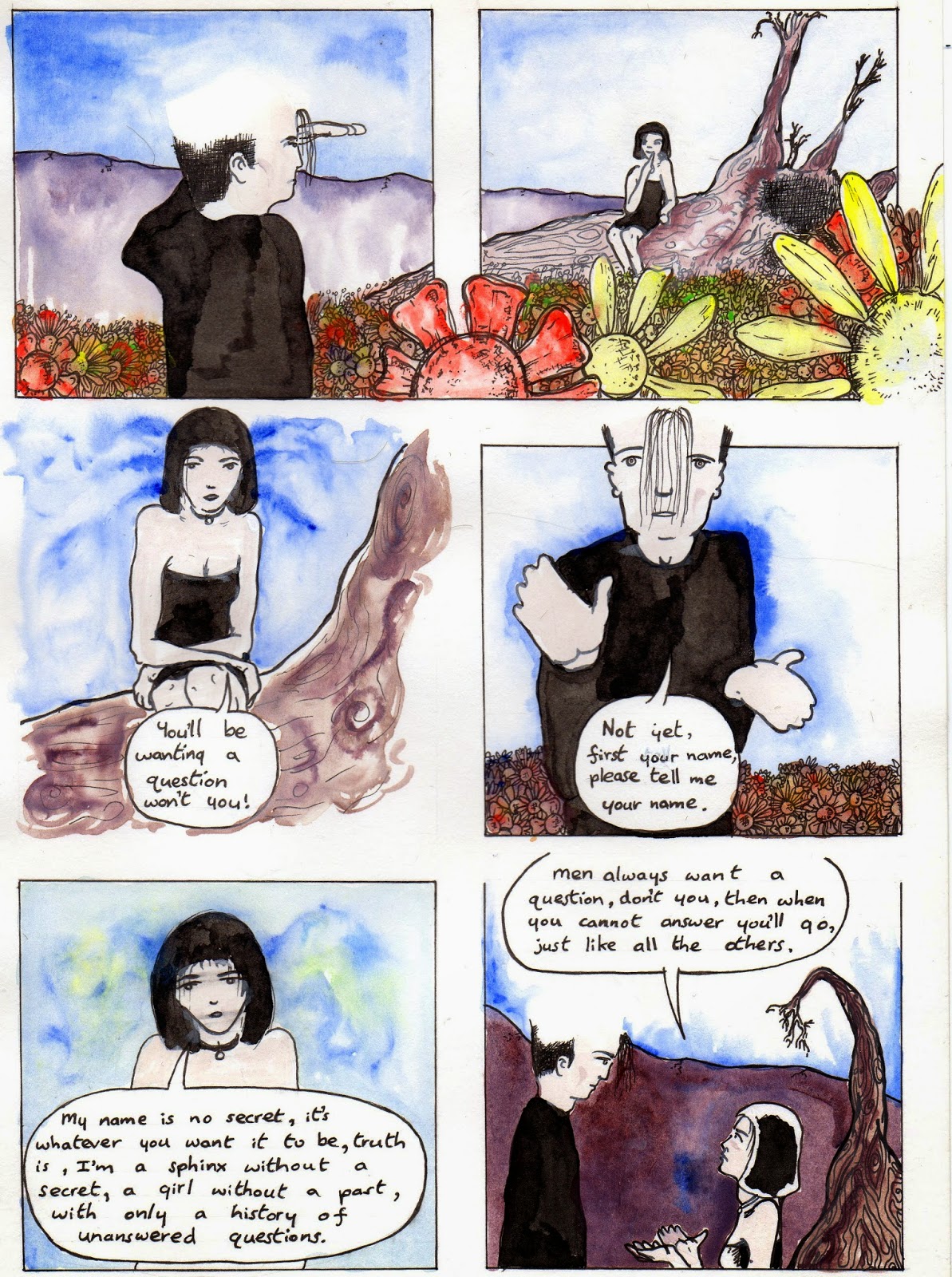 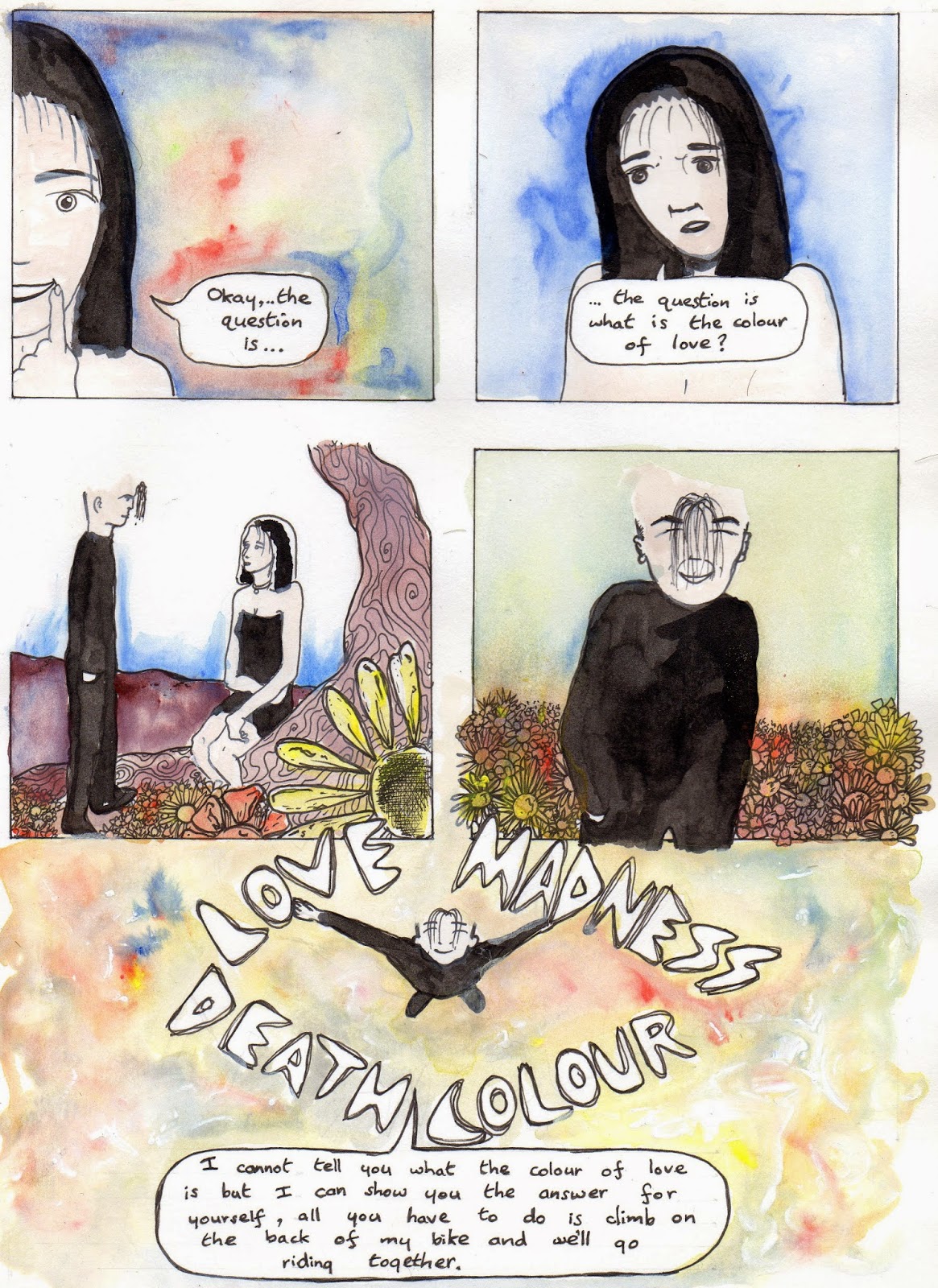 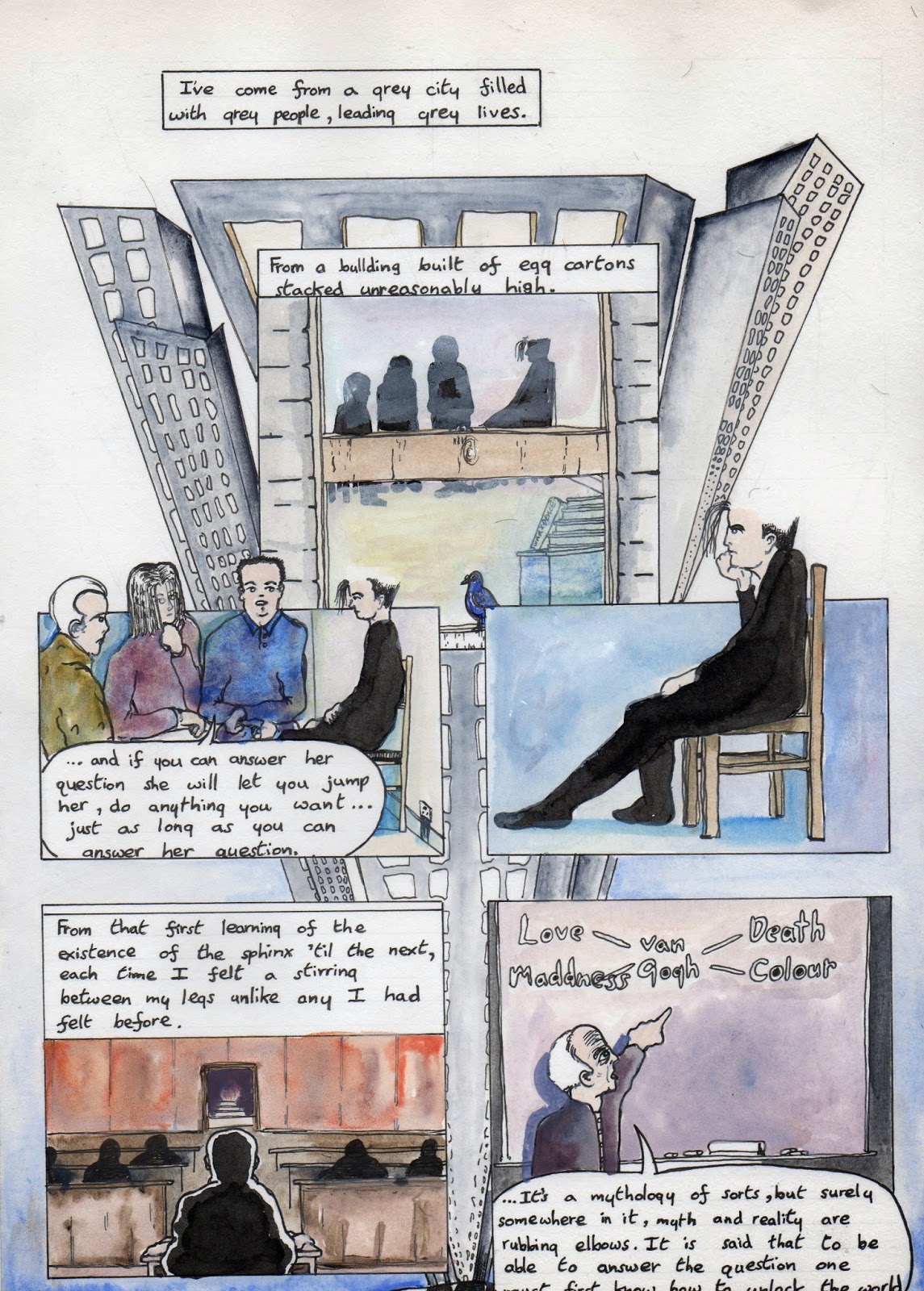 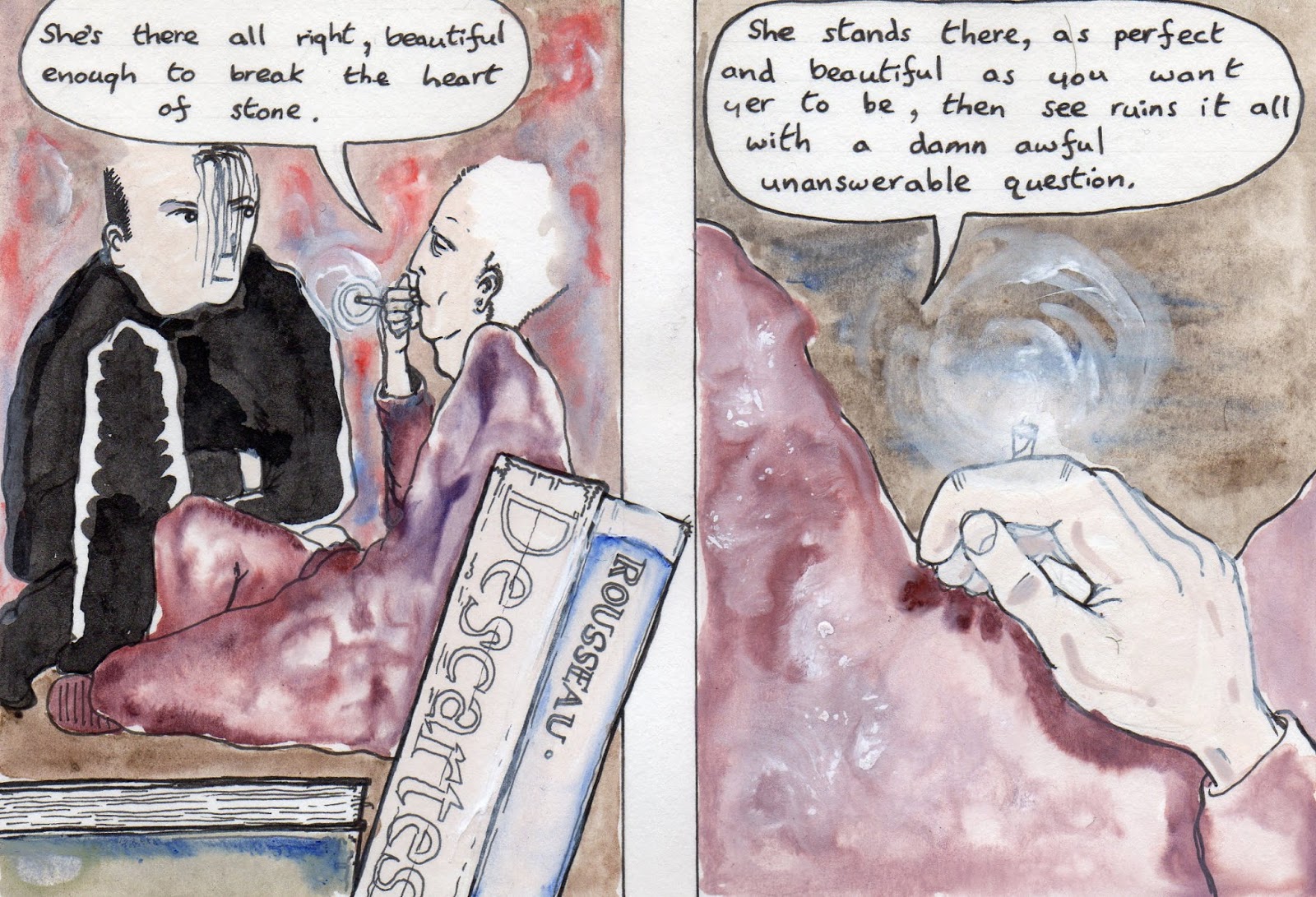 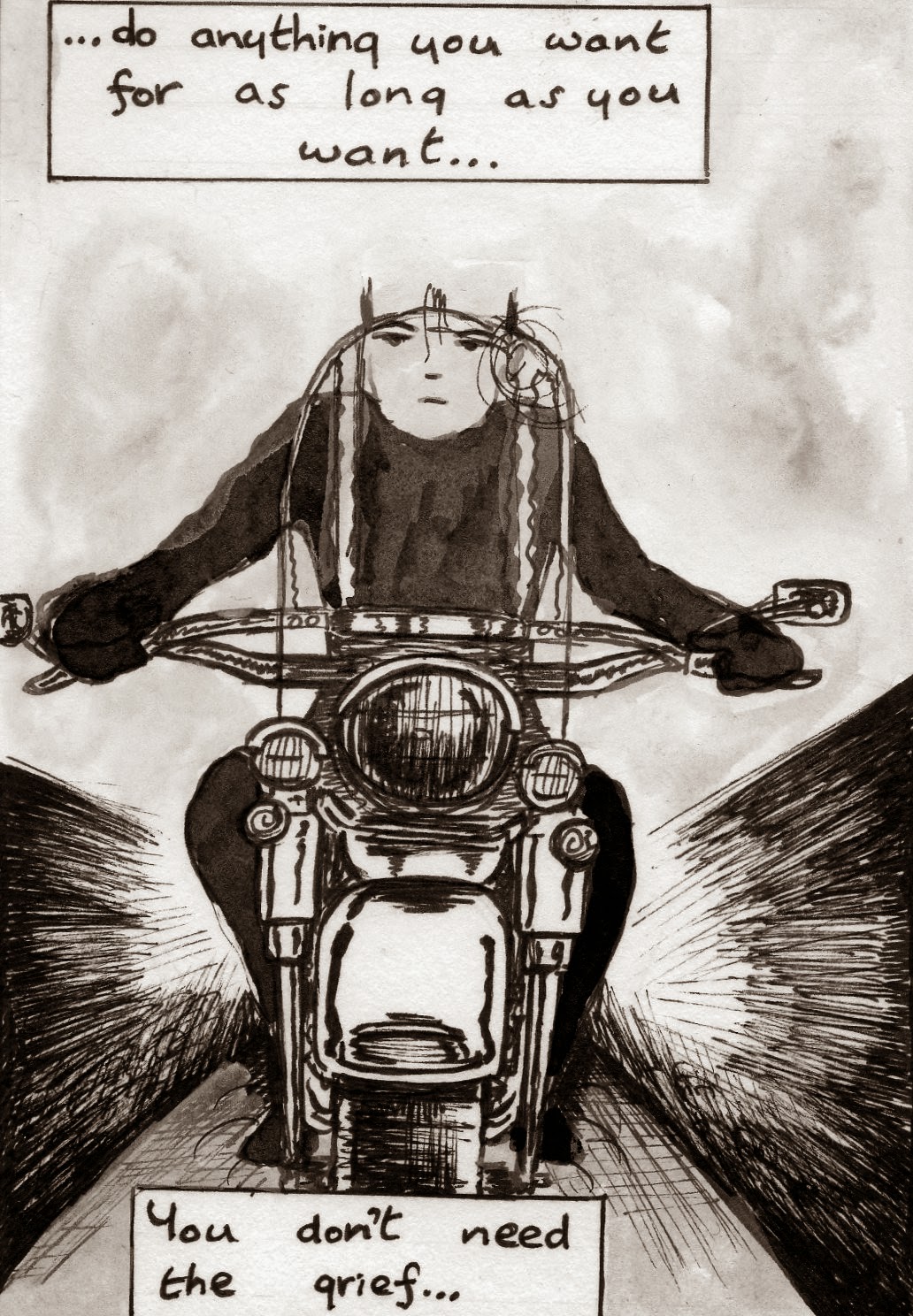 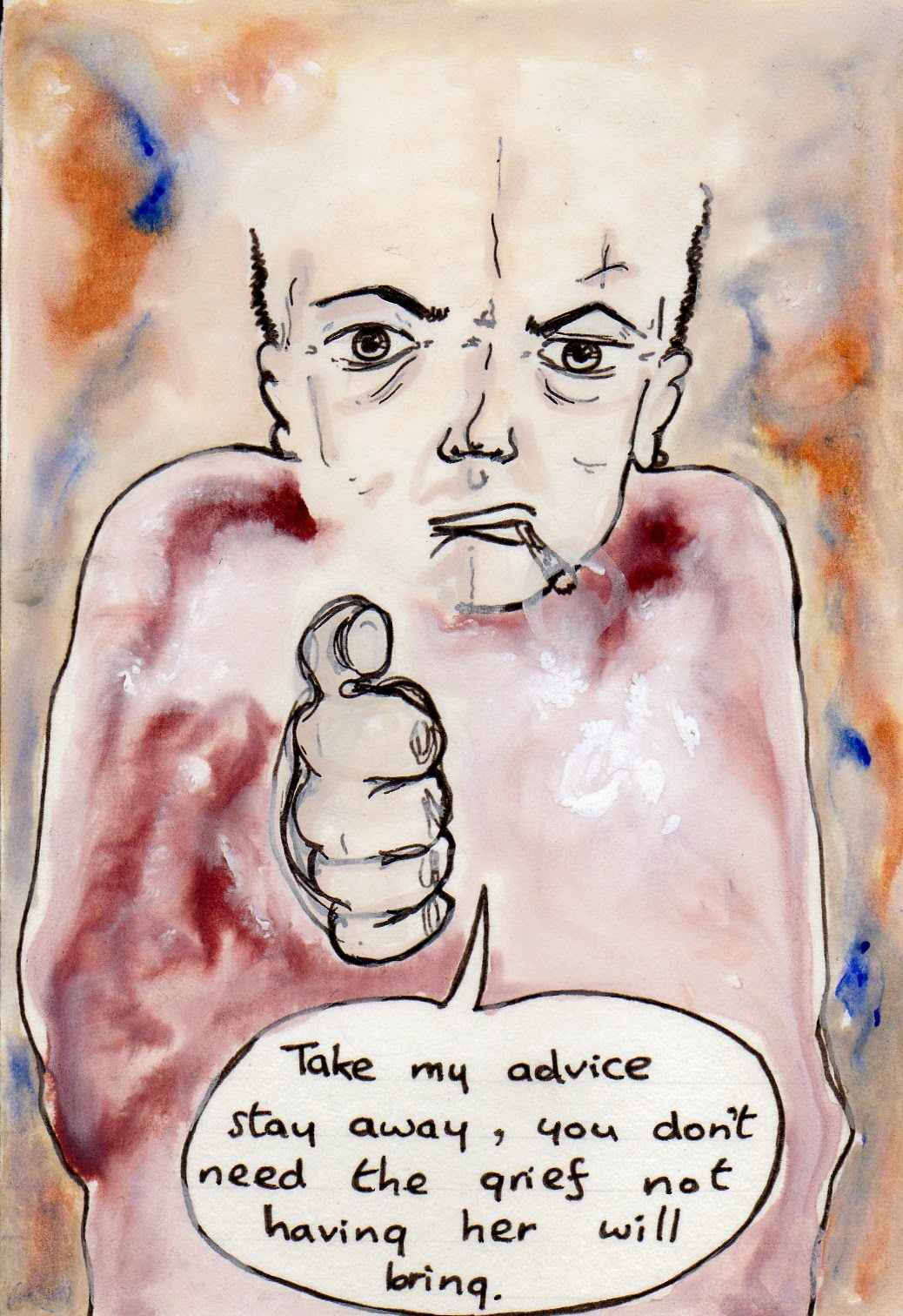 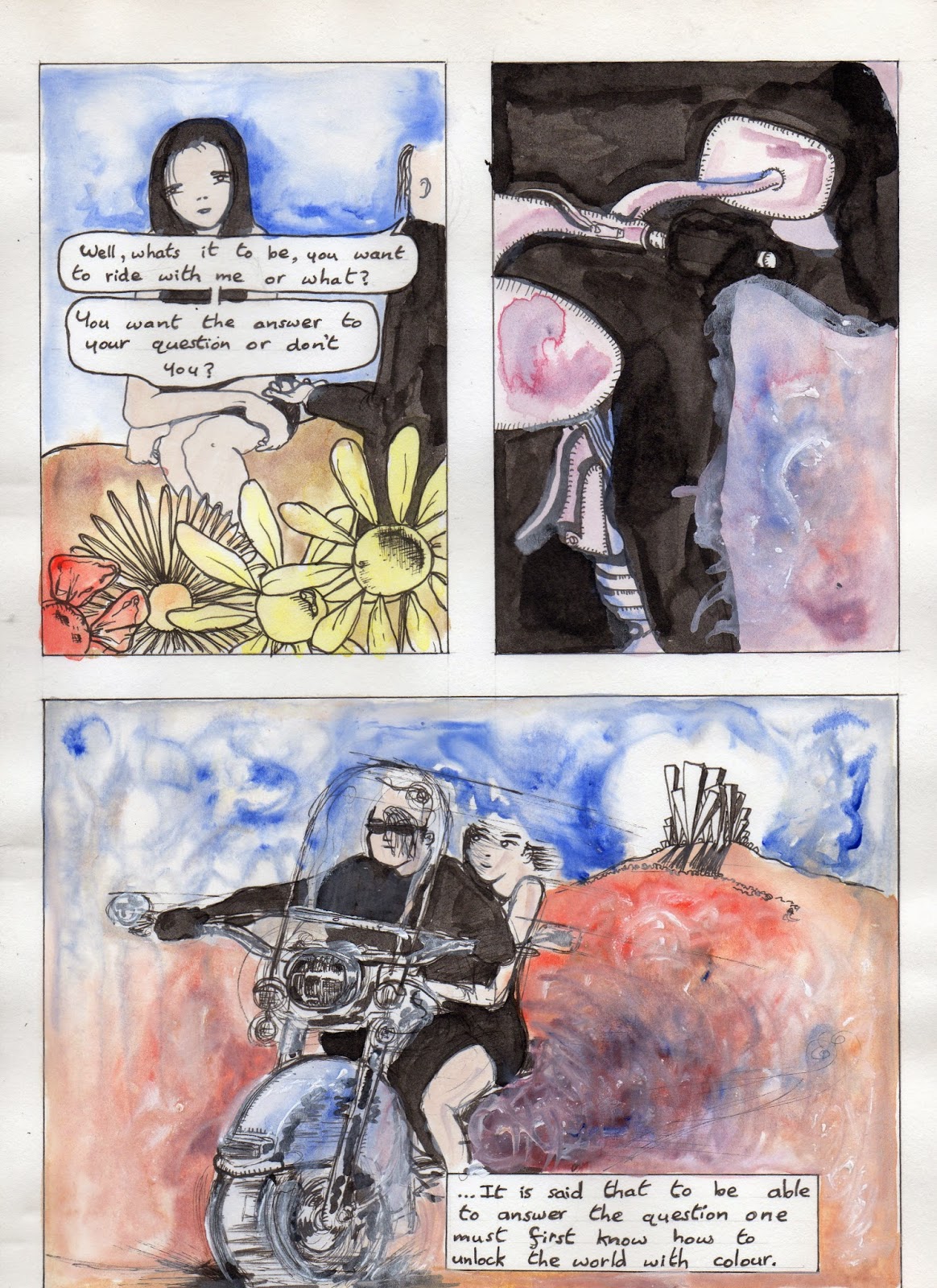 How cool are the Jesus And Mary Chain. They not only wrote and performed songs as though they were using chainsaws as musical instruments they also looked like Otherworldy Warholian entities. Or whatever.
I so wanted to be able to express myself in such a glorious fashion but have none of the required variables( And am totally incapable of ever being cool.)I tried it in the only way I could. A comic strip written as though it were a pop song by The Jesus And Mary Chain or The Velvet Underground. That is why it is a bit of a nonsense poem of sorts. Why it feels as though words are missing and like it does not feel as though it is about anything. Only that it may sound good and is pretty to look at. I do not know; why does any song work?
It was drawn by a local artist Sean Hamilton. Well, local to me anyway. And he totally got me and did a better job than I could have hoped for. I love his washy colors, the lightness. We worked together way back in the day on another wee story The Good Father. There are probably a few copies lurking in the bottom of certain peoples comic boxes who I forced it onto. If it is any help to anyone who has a copy and is thinking of rereading it, I heard the Velvet Underground Sunday Morning in my head as I wrote it.Sean immigrated to Australia shortly after we worked together. I do hope I did not contribute to his decision. I believe he has since moved back. I do hope I did contribute to that decision.
Oh by the way, Happy Easter to you.
I hope the Sun finds you in a field full of Sunflowers. 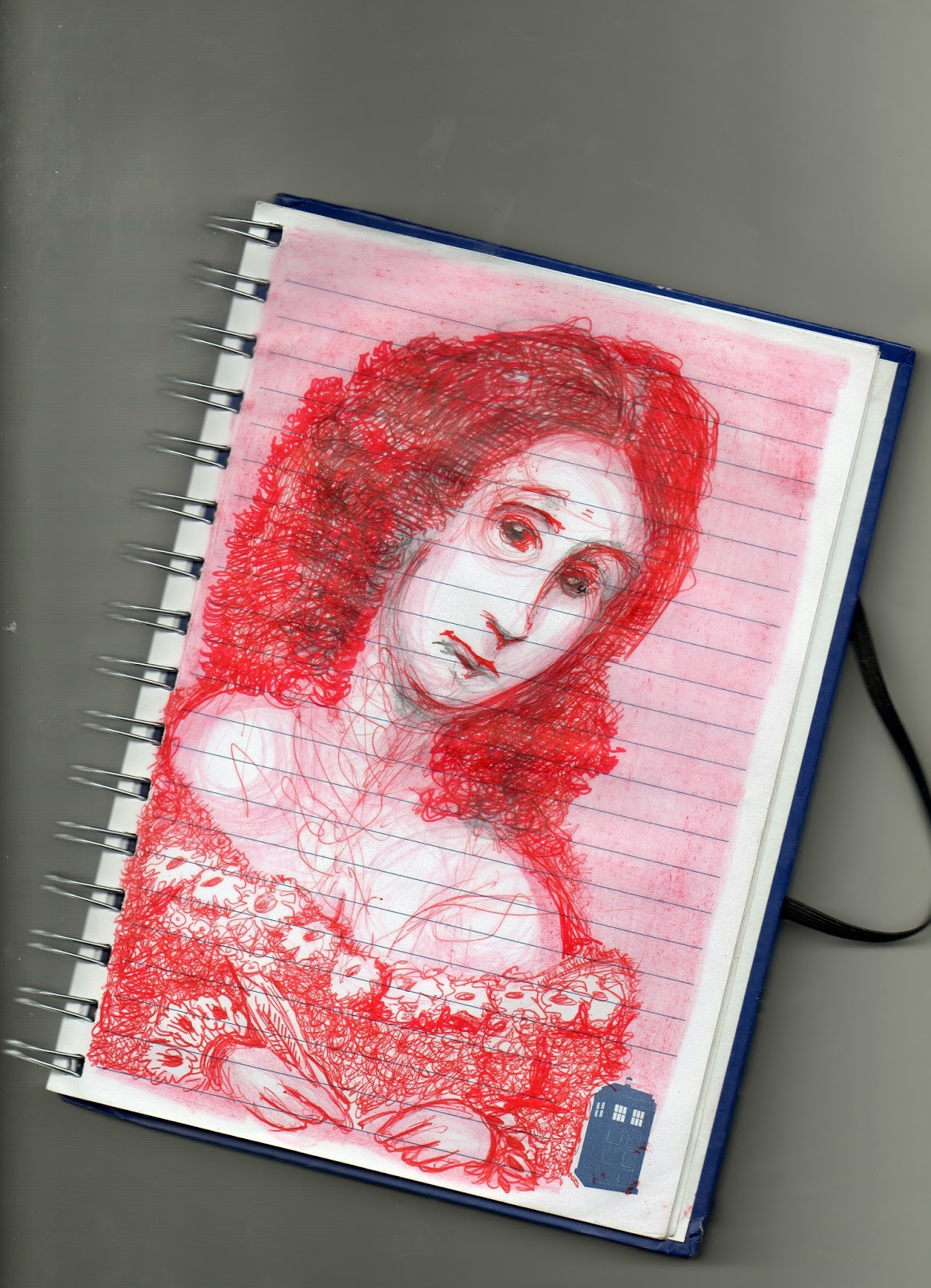 (From my sketchbook) Mary Shelley was twenty when she wrote Frankenstein.  It is an astonishing accomplishment for a man or a woman of any age from any age and is the very definition of catching lightning in a bottle or even fiery wisdom from The Gods in the Promethean sense. A novel of such enduring fame it reaches a new generation and continues to haunt our shelves as few others have. Frankenstein, the original punk scientist, the man who rebelled against the very forces that shape life, a continuing metaphor for intellectual hubris and the suffering that seemingly follows in its wake. A friend lent me an amazing DVD of a 1977 BBC television series called Supernatural. These are eight stories of old school gothic melodrama and terror all wondrously told by Robert Muller. Lavishly produced and worth watching over and over again. There is one story in particular that gave me goose bumps called Night Of The Marionettes. A snow bound tale that explores the dark origins of Frankenstein and the fertile haunted feverish imagination that spawned it. It stars Gordon Jackson(in a white fright wig) and features a remarkable turn by an actor called Vladek Sheybal which will linger in the minds eye long after seeing. The marionettes of the title are absolutely terrifying and the whole production has a quality that is just absent in modern productions.
The opening and closing credits act as crimson curtains on eight supernatural delights that have never been repeated on the BBC since their first airing. The BFI released them last November 2013 and would sit comfortably in any collection that celebrates the macabre.

Saturday Tea-Time 1977 All Over Again. 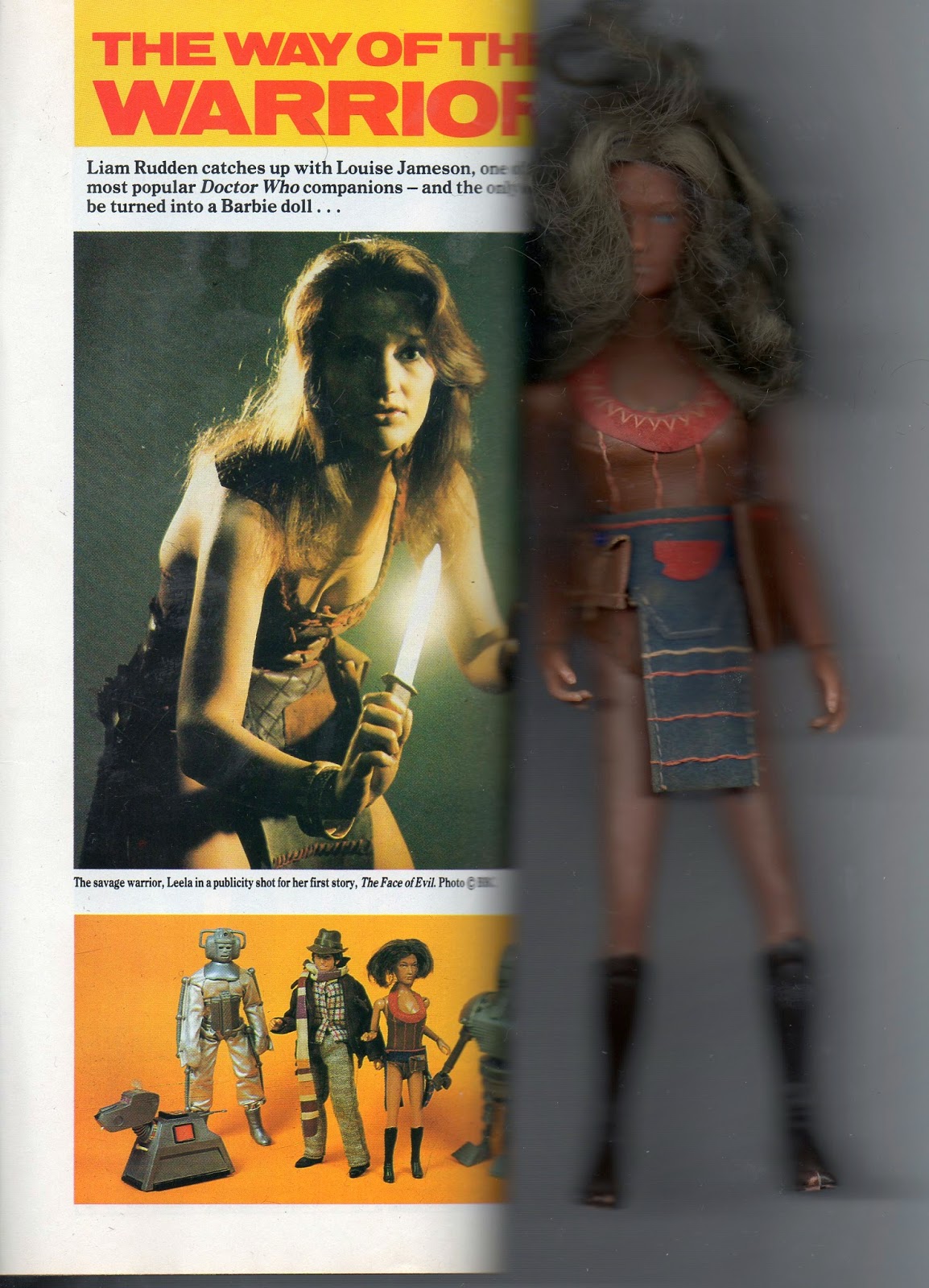 I
I have heard it said it takes a crooked man to build a crooked house,well in this case it is very true. In an off-season sea-side town where something jagged and grotesque stalks the streets leaving gruesome deaths in its wake a wheezing and a groaning announce the arrival of The Doctor and Leela to lend aid. The sole local constabulary officer is terribly out of his depth in the face of this otherworldly foe with a Mister Punch face. I am talking about the latest offering from Big Finish Productions; the third in a second series of Forth Doctor and Leela stories which are proving every bit as good as the first lot. Each one has been quite different to the one proceeding; a mirror to the seventies series they so aptly follow. This one is a cracker. The wonderful writing and admirable sound design by Big Finish conjure up the winter atmosphere of the haunted location. Baker and Jameson as always shine as do the supporting cast, especially one Neil Stuke who pitches his performance as the Crooked Man just perfectly. Using only his voice alone to bring to life a nightmare figure from a spooky Victorian nursery of an imagination. I can imagine him all distorted elbows and twisted spine in the recording booth in an attempt to channel the crookedness of the character.
This story could have come crackling from the speakers of an old Bakelite radio and deservedly takes an honorable position in the new/old adventures in space and time of The Doctor with one of his best companions and friends.
Oh keep up the great work Big Finish. You make an old fan feel young again.

The Ballad Of William Bloat. 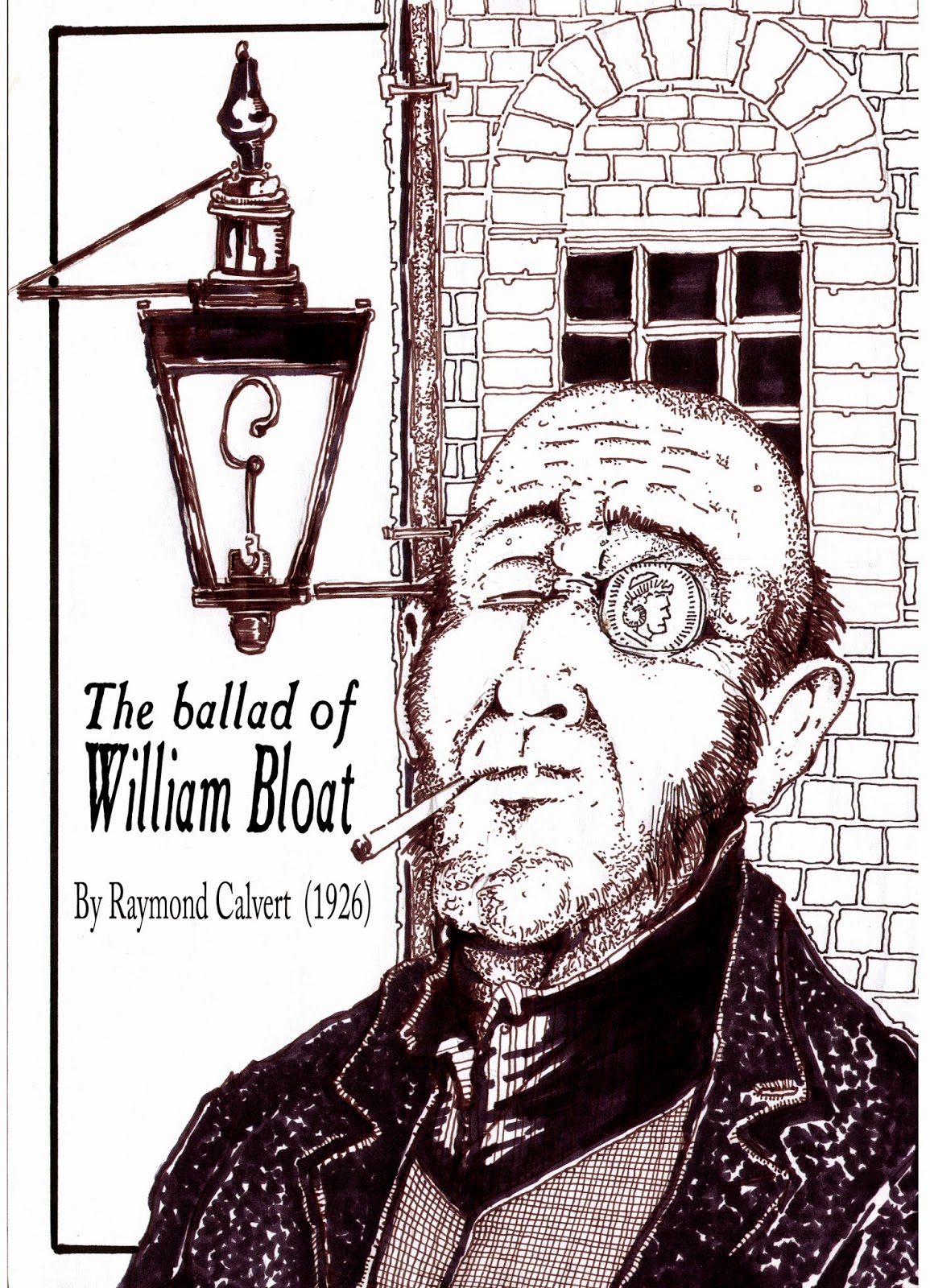 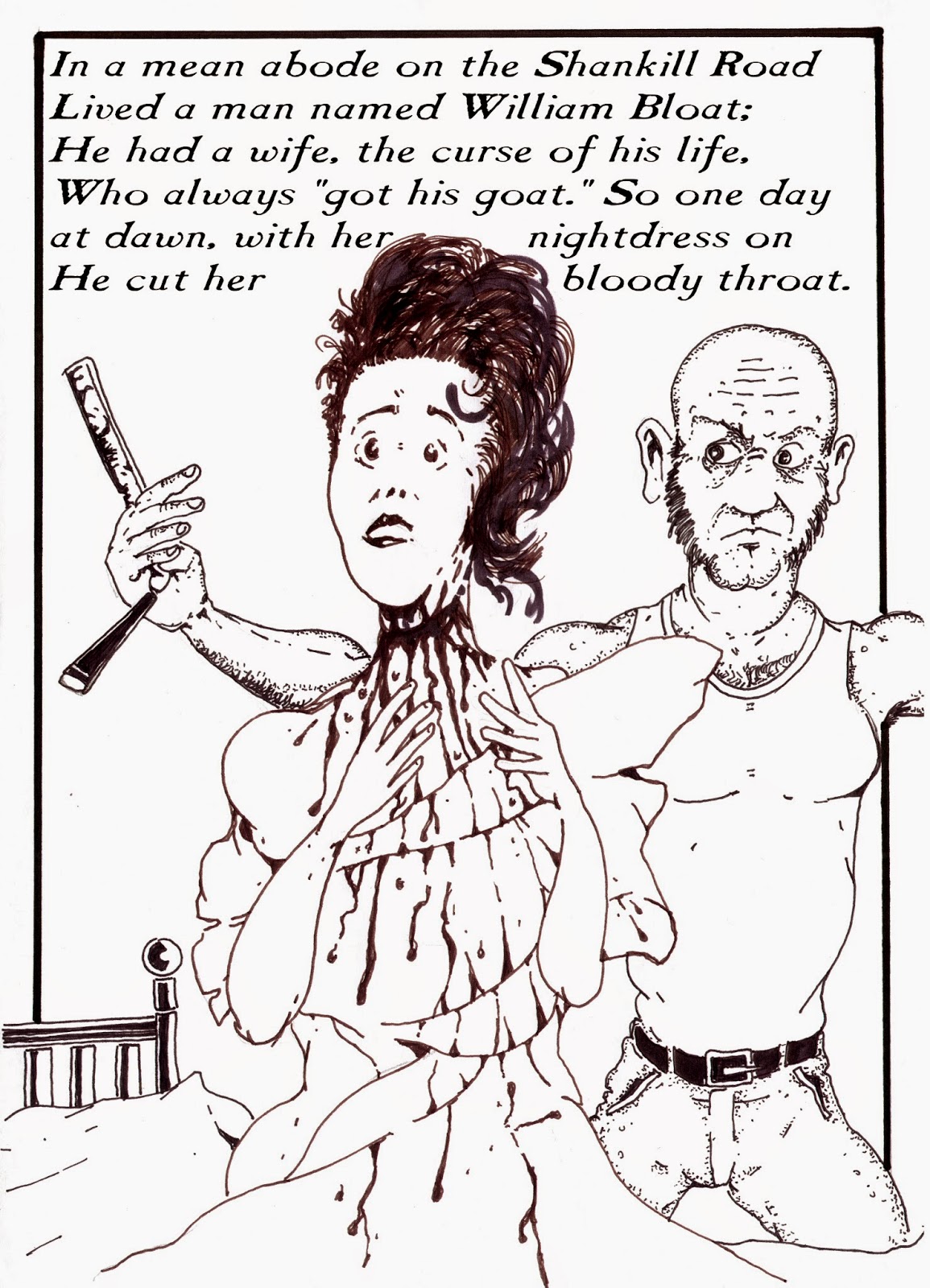 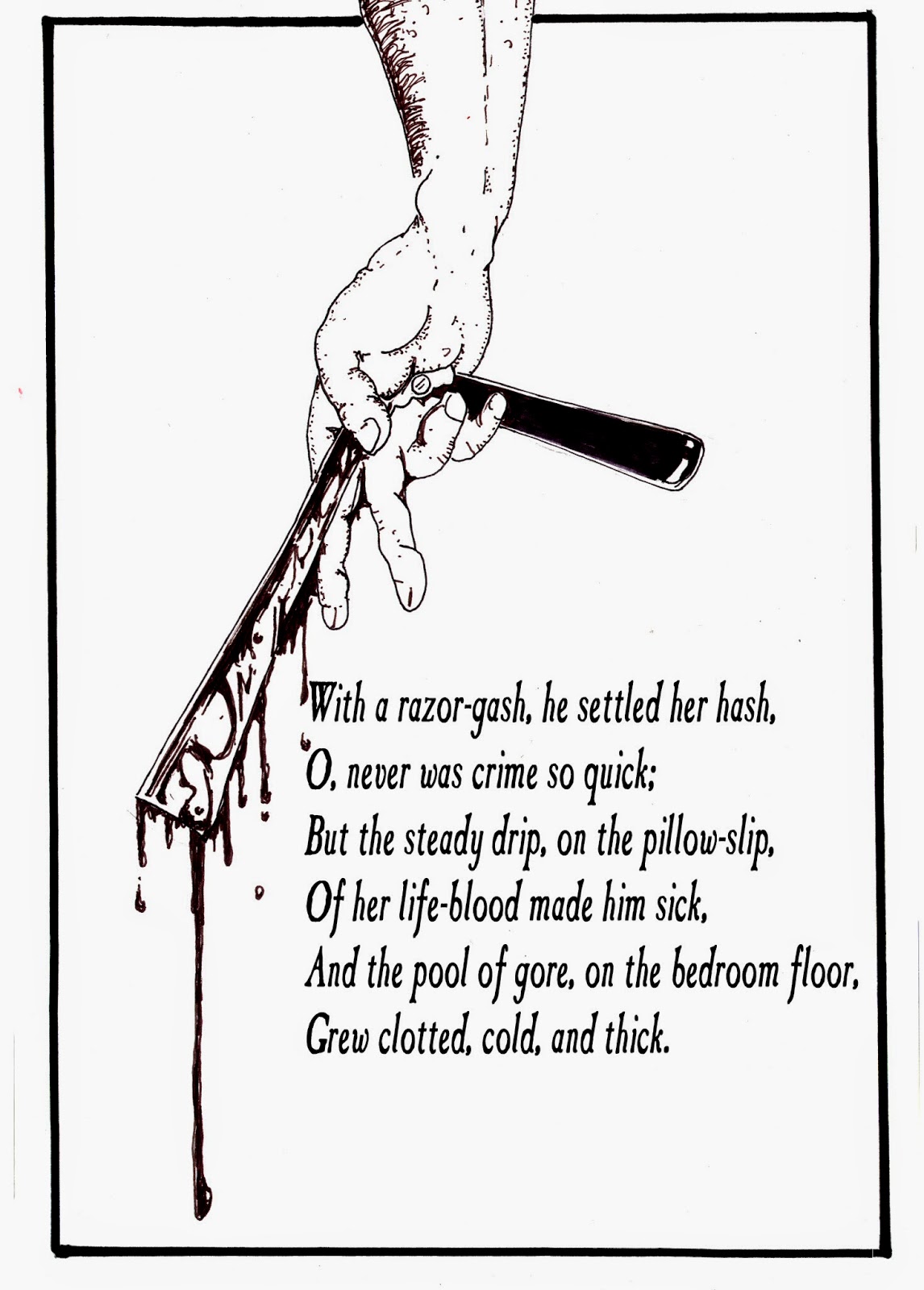 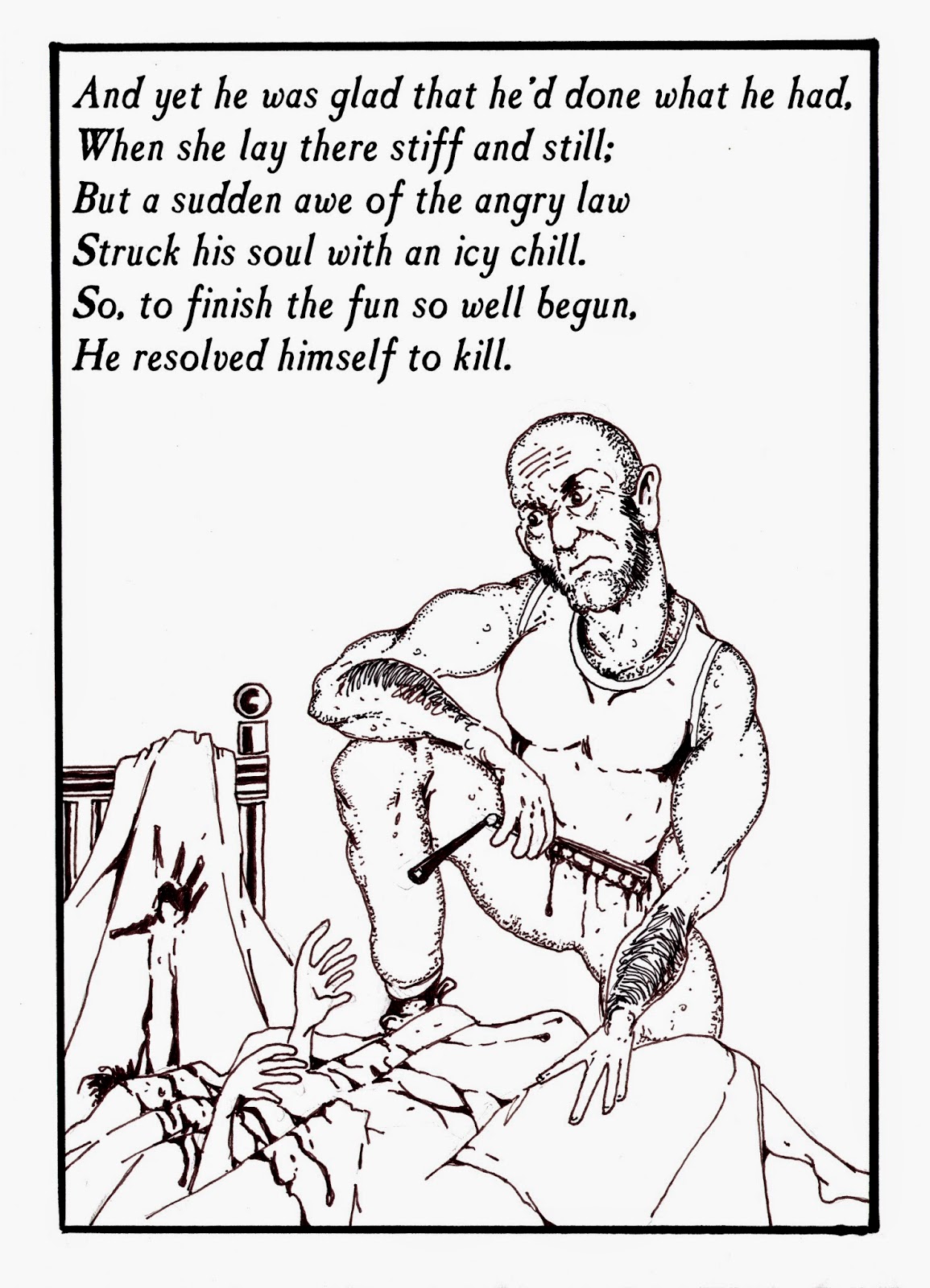 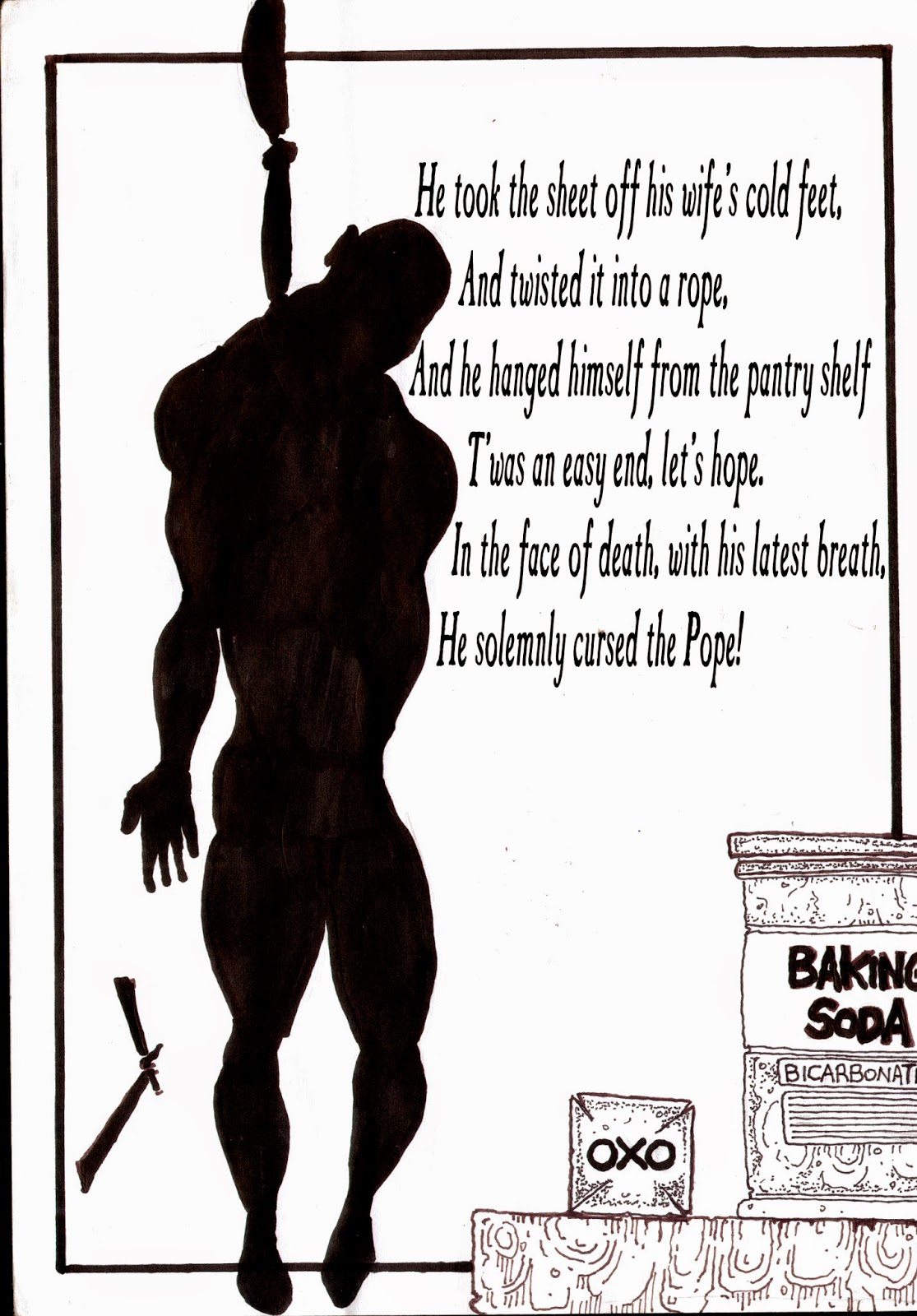 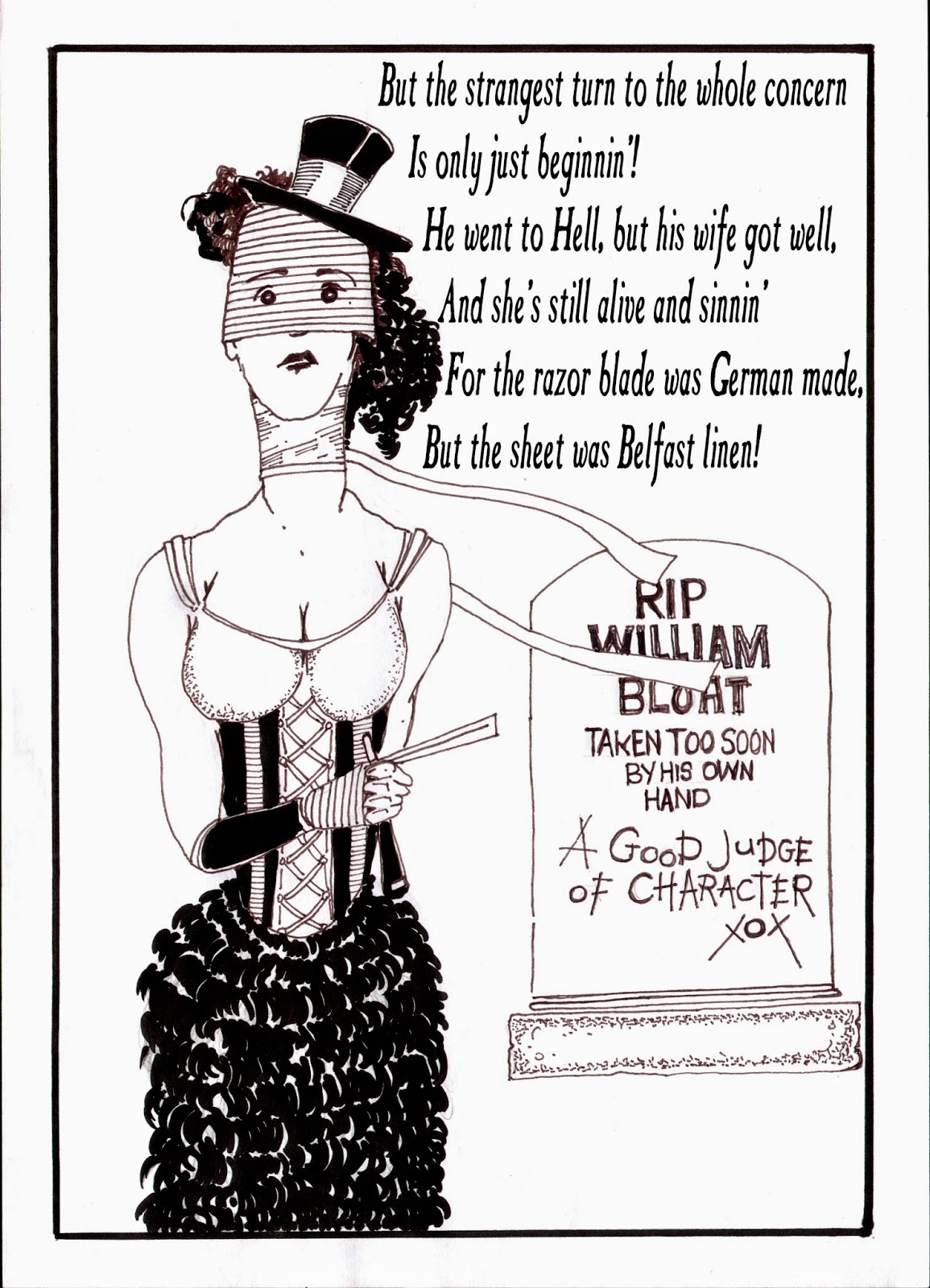 (Poem by William Calvert, Art by Malachy Coney, lettered by David Withers.)A song written and composed by William Calvert to entertain a cast party for members of his University Dramatic Society in 1926 and published as a poem in 1950 in a collection called Brave Crack. I have always had a fondness for this piece not only with regard to its echo of Sweeney Todd but also because of the degree to which it reflects the notions of tribalism, cultural, political and religious differences, generated by Catholics and Protestants trying to exist together in Belfast. I have heard it performed many times over the years and it has become part of the cultural heritage of Northern Ireland's capitol city.
London Derry has THE TOWN I LOVED SO WELL.
Belfast has THE BALLAD OF WILLIAM BLOAT.
Here is my interpretation; Enjoy.