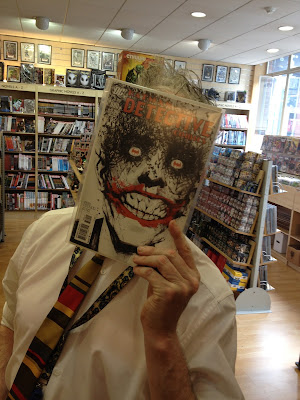 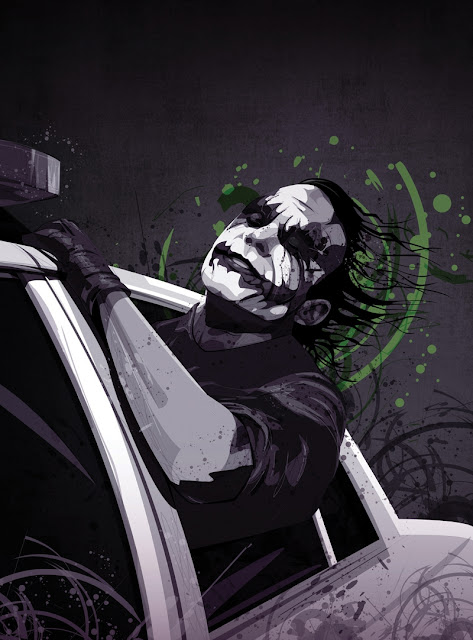 Mark Reilhill's Joker.
Had a really interesting chat with the artist Mark Reihill this week. It is easy to forget that people working as professional artists also get excited about the subject matter they are illustrating because you presume it is just good business. Presume being the word. It was great to hear him talk about the artist Greg Capulo's work on Batman with such respect and reverence.
Especially when you seen he is capable himself of producing work such as above.
Posted by Malachy Coney Curiouser and Curiouser at 05:19 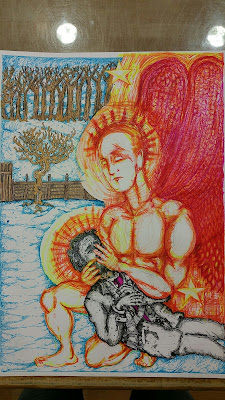 (from the sketchbook.)
A sketch inspired by a beautiful song by The Tiger Lillies from their album Urine Palace. I am not entirely sure what the song is about. I only know how it made me feel. The album sounds like a live album but the performances are extraordinary It sinks to such depths of depravity but sores close to heaven at the same time. It is not for the faint hearted but is certainly something for the broken hearted and lost.
"..Poor Maestro , You've Lost Your Crown."
Posted by Malachy Coney Curiouser and Curiouser at 05:19 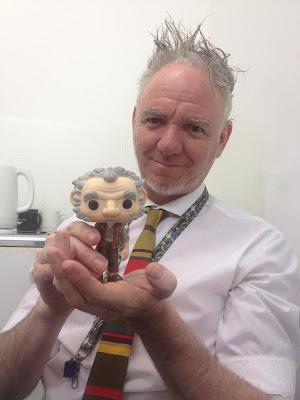 Look what some one presented to me and asked if I was getting royalties. Bloomin' Cheek! I suppose in a way I am a BFG. but I am more of a Big Friendly Gay than a Big Friendly Giant..
Well, I try to be friendly. It may not always be the case but I do try.
As if Steven Speilberg would ever give me anything. other than the joy of watching some of the best movies I have ever seen. He has even directed one of my favorite Columbo stories.
I remember back in the day in a store I used to work in this customer in a broad and loud Belfast asked me for a video (that is a medium in which films were recorded and stored on tape!) by the director Stephen Spaceberg called We Do Not Need Your Batteries.
Alas we did not.
The same customer later asked me if the sequel to Braveheart had come out. The film about William Wallace that is presumably set after his death.
Bravehearter? 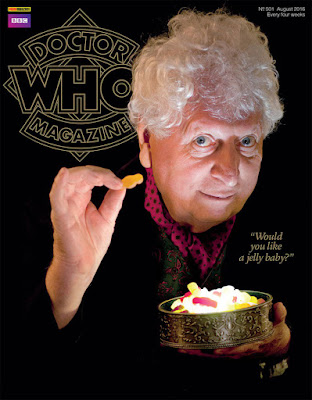 Oh Tom Baker Say It Aint So. The last interview? Hope not. This is a man whose brain bubbles with anecdotes like an active volcano. A force of nature in every sense of the word. And yet he is also a man who probably understands when to leave the stage better than most.
It is just us who compel him to stay. We never want not to hear that voice.
In his bloody eighties and still causing trouble. Did anyone read any of the newspapers this week as he lambasted the elderly for voting for a British exit from Europe. He was told off for letting down his age group. Here is a man who will not be told off. A man who's voice rings out as strong as he wishes. A man who is entitled to his opinion even if you do not agree and a man who has earned the right to speak his mind. Actually as have nearly every man or woman of his age. They deserve respect and they deserve support. Perhaps we are not going to like all the wisdom they have to share but we have to listen. Even when they do not agree. Because like it or not "they" are "we".
I am so looking forward to reading this interview.
How else could you follow up that last big #500?
Posted by Malachy Coney Curiouser and Curiouser at 04:19 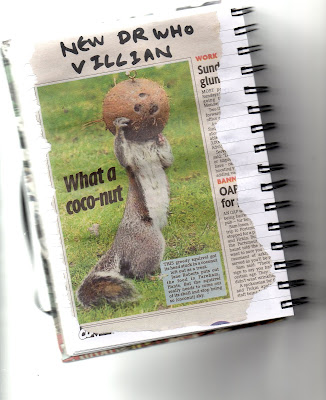 Found this posted to my locker in work. Some ones idea of a joke at the expense of my fondness for Doctor Who. Shocking,Eh? Is This a Who Crime? It was either posted there by someone from the middle ages or some one with a slim grasp of spelling. And I do work next to an ex-colleague of Thomas Cromwell who thinks Doctor Who is rubbish. It is true I have heard him say on more than one occasion "Doctor Who is rubbish.". I have tried to tell him that life is not all witchcraft trials and variations on themes by Thomas Tallis bu the Tudor mind-set is a tough one to rattle. Still I would not wish to blame him in the wrong.
Although in my case that would result in little more than a long sigh or a roll of the eyes. Back in the day when he got things wrong it usually ended up in a beheading or a bonfire. The human kind.
Posted by Malachy Coney Curiouser and Curiouser at 04:18

Ode To A Nightmare. 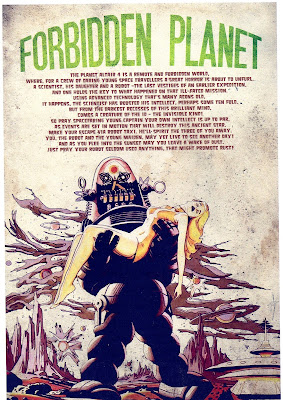 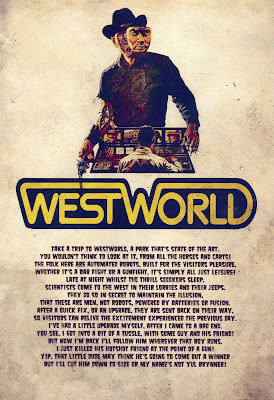 Move over Keats! now this is what I called poetry. Just two of the lovely table mats awaiting the guests at their themed tables at my chums Connor and Mary Therese' s science fiction themed wedding( are'nt they all.). From all the films they have enjoyed together they managed to put together not only a class looking table setting with each table representing a movie, character and franchise they have enjoyed over the years along with an accompanying rhyme.
I liked them all and was glad to be able to share just these two.
iconic and funny.how good a mix is that!
Posted by Malachy Coney Curiouser and Curiouser at 04:18