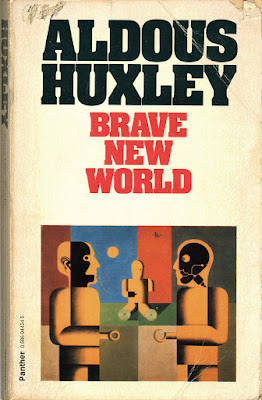 "How beauteous is mankind! O brave new world, that has such people in it!" so said Miranda, daughter of the sorcerer Prospero, in William Shakespeare's final play The Tempest. Miranda's splendid observation is said in awe and innocence. Having been raised in a form of splendid isolation herself she views that which is new and original to her as beauteous, unaffected by a worldly pessimism or distrust of the unfamiliar, she rushes towards things which are new to her. Which makes me wonder the context Aldous Huxley uses the title, is there a degree of sarcasm at play? It is Miranda's lack of worldliness that leads her to speak her feelings out loud. I do not believe for  a second that Aldous Huxley viewed the world of then and the possible now as a beauteous thing. And while I have no doubt that Aldous Huxley did see things in a prescient fashion, I cannot fathom what in that vision he would herald as a thing of beauty.
I have gone a lifetime without reading Brave New World but have always been familiar with the details of the book, how much of it was viewed as cultural prescience and how the author was celebrated and even championed as a visionary. Between Huxley and Orwell it is difficult to say who was credited as the most visionary. Well, not exactly true, Orwell has always been referenced through out my life and the wider culture than few other writers. Not really a joyous thing really given how dystopian both men's visions were.yet, that is the rich vein that runs through the undergallery, the deep core, of speculative writing. It is a rich vein of world building but who would want to live there? And I have no doubt that many would believe we are already there...
Originally published in 1932, this must have seemed beyond the heights of decadence to most readers of the era. Some of the ideas still have the power to unsettle. Not even the ideas which are perhaps bullet pointed with that very intention, though it is difficult for me to interpret which of the concepts contained within were intended as such. Some of the peripheral events in it, so casually dropped into the narrative, a chiaroscuro morality at play, cringe inducing for the reader, as though the monstrous propositions are not too upsetting as the details are scathing. But they are there, lurking on the fringes of the central narrative. Its a sort of retro science shaowplay, using light and distance to obscure horrors, imbedding them as the normal state of play in this future dystopia, but again I stress, they are there. No amount of Soma, the wonder drug of the novel which enables the general population to float lazily in their pathetically grateful somnambulate existence would be enough to blind me to the daily horrors of this Brave New World.
I would like to believe so, would like to hope so.
It should perhaps be noted here Prospero's response to his daughters statement.
"Tis New To Thee..." 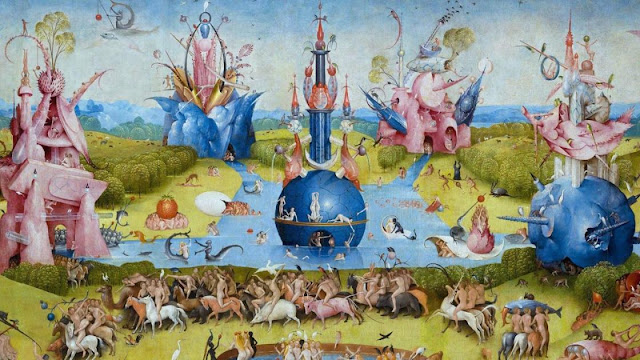