I am the servant of Sutekh He needs no other. 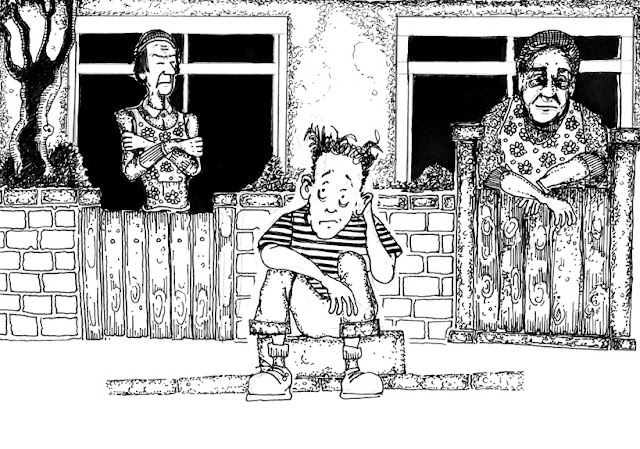 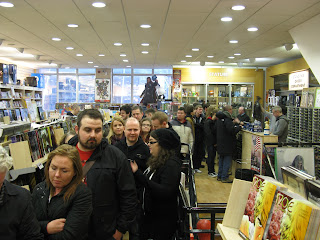 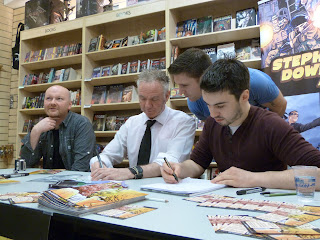 Many many thanks to all of you who came down for the Noe The Savage Boy issue#1 signing at the Forbidden Planet International store on Ann street Belfast. Rob, Stephen and myself were kept real busy and we got to meet some really cool people from all walks of life, ages, shapes ands sizes. Our signing time ran over to accomodate the footfall but the Craic was good and a great time was had by all. Thank you for the intrest shown in the launch and for all the bits and pieces of our pasts brought along. Comic boxes were dusted off and old titles brought back into the light. Happy Days. Thank you to all the staff at the store for keeping the whole thing grounded and special thanks to our pirate chums for keeping it charmingly barmy.

Mad,Bad And Dangerous to Noe.. 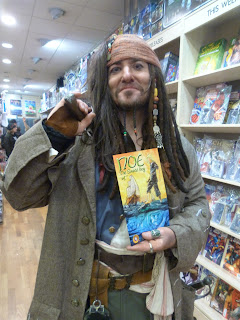 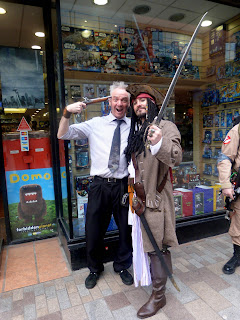 Lifes a funny old thing..
You go a whole lifetime without meeting a single pirate, you write one comic involving the pirates of the Barbary Coast and the most famous pirate in the history of piracy shows up.Har,Har,old Saucy Jack himself.
He drunkenly tried to pressgang me into joining his wicked crew but I outfoxed him by taking myself hostage with the rogues very own pistol.
COME AWAY AND SEE ALL THE WONDERS OF THIS SPINNING GLOBE
BEFORE IT BECOMES AS DULL AND FLAT AS A PANCAKE. ALL THE
UNSEEN CORNERS OF THE MAP ARE BEING FILLED IN AND THIS
COULD BE YOUR LAST CHANCE TO SEE THEM BEFORE THEY
DISAPEAR FOREVER!
He rasped rumly promising great adventure in a most rambling but compelling fashion. Alas he could not
quite grasp that I loved reading about adventures not actually having them. A situation I do hope does not change anytime soon. My old heart would not be up to it. Still, he is as you can see a terribly well read pirate. And if you are going to read at least one pirate comic this year why not ours.
He has promised in his rum induced fugue to support the
signing at the Forbidden Planet Int store in Ann St Belfast
this Saturday. Why not come along yourself and do the
same. Have a wee bit of an adventure yourself...
Posted by Malachy Coney Curiouser and Curiouser at 07:20