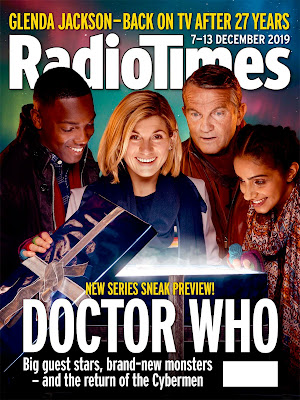 Oh yes, its that time of year again. The nights have well drawn in and we are heading towards Christmas. One of the surest signs, one of the more reliable visual clues, for those smart enough to know a hawk from a handsaw, is the appearance of Doctor Who on the cover of Radio Times. No longer a feature on Christmas day off course but The Doctor being the most nonlinear being in creation is welcome any time of the year...
Posted by Malachy Coney Curiouser and Curiouser at 09:03

Revelation Of The Daleks.

Well, here it is, the last of the original series novelizations, written by Eric Seward himself. This lovely looking volume, the companion to Ressurrection Of The Daleks released earlier this year, was in my mind the perfect bookend to that much loved series of novelizations. But off course they are nothing like that.Both stories take place at much later stages in the later stages off the Doctor's original run on television. Relatively speaking...
Which is what much of the discussions revolving about the life of the Doctor often require; a loose sense of relativity.
This story is a very spirited reminder of that period of the good Doctor's history with all the characters and situations inhabiting the more extreme and generally eccentric zones of the Whoniverse. With more room to breathe and tell the tale there was also room to give many of the characters back stories, in the fashion that book story telling can get away with compared to its cousin television story telling. All done with a great sense of almost Douglas Adams like humour and goofy insight, without ever feeling like over padding or losing the sense of darkness that original script oozed.Like so many stories from the Colin Baker era there are some very dark things going on while The Doctor and Peri brush shoulders with some very shady characters indeed. There is humor too, again exhibiting a darker tone than usual. With the character of The Doctor being loud, proud and garrulous to know...
Poor Peri, of all The Doctor's chums she was the one who more often than not got to experience some of the nastier aspects of time and space. In this story alone she finds herself clubbing a diseased man to death with a log in order to save The Doctor's life. Throughout her time with two incarnations of her friend she was witness too, and even experienced, some full on horrors. One wonders she ever felt inclined to travel the universe at all with it vast panopoly of terrors. I am remined of Donna's reaction to the grotesque and cruel treatment of The Ood, which almost made her reconsider her desire to explore the wider unknowns. So soon after tracking down the impossibly elusive Time-lord.Poor Peri seemed to run into such horrors every time The Tardis landed somewhere or sometime.
And davros was back for this one. At first just as a demented and rotting Halloween turnip, sitting at the center of an elaborately spun web whose threads stretched across the stars. Mind you, the humans who stray onto this web are little different from the mad scientist from Skaro. Every human being The Doctor and Peri encounter in this story are every bit as corrupt and self serving as Davros. Where is the love? it is perhaps to be found only in The Doctor /companion relationship between the two Tardis travelers. Or in this story between Orsini, the space knights templar, and his squire, the smelly Bostock. Who come across as a very dangerous Don Quixote and Sancho Panza.
In space no one can hear you sigh.
A great read. A treat for long time Doctor Who fans but a splash of funereal color for anyone who enjoys bizarre space yarns. 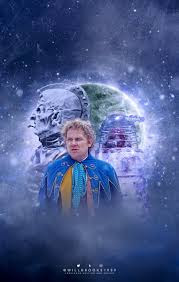 The Chimes At Midnight. 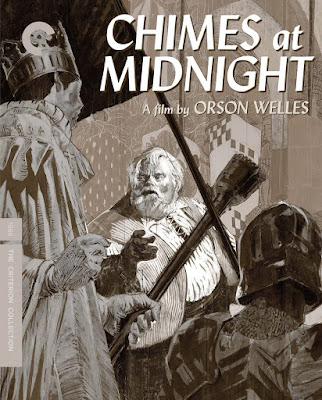 I had never seen this film made by Orson Welles before. I do not think it has ever been shown on television and I have never seen it for sale in any store any where.Then I was leant a copy by the artist Mark Mc Keown who recommended I give it a view and Oh boy did it reward. I put it on late one night just to watch the beginning, to check out the tone, and just could not switch it off. I got so drawn into it, this hybrid of the words of Shakespeare and the ballsy interpretation by Orson Welles.
It looks and feels raw and dirty, as though the cast were living their parts. I had expected a slightly affected turn and was not prepared for the naturalism on display. 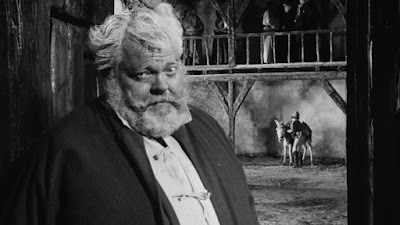 Orson Welles is magnificent in this. You can see why Falstaff's friend treat him with such a wide mixture of affection and weary scorn.He is a lazy scoundrel but charmingly bumbling with it, a complete rake who any father should be weary off his son spending time with. He is bad company but wonderfully full of life too. Mad, Bad and hilrarious to know. The King is heart broken his wayward son Hal is spending any time with this unruly mob and fears his kingdom will fall to disaray in the hands off such a man. And young prince Hal revels in his time, mixed in many a scrape that are most unroyal. But when the time comes and he puts away the toys of childhood, when the time comes for him to assume the crown he casts Falstaff aside, ready to assume his kingly mantle.
You would need a heart of stone not to feel for the crestfallen Falstaff as he sees his dreams of unearned nobility fall away, pulled from him in that most heart felt of rejections.
just fantastic stuff
Falstaff is dead...
"He is in Arthur's bosom, if ever a man went to Arthur's bosom."
Posted by Malachy Coney Curiouser and Curiouser at 08:46