Oh Jack We Thought We Knew You. 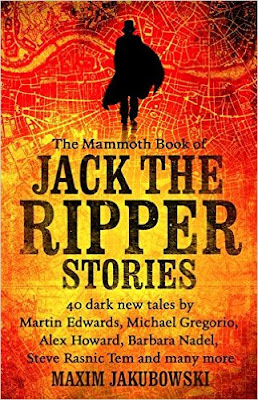 Enter the bewildering and disconcerting labyrinth of  1888 Whitechapel London in the company of forty very different writers and take a true walk on the wild side. People imagine the relative ease with which they could do such a thing but I wonder if modern sensibilities are capable of surviving a dander on the unforgiving cobbles of the Victorian era. Especially the fecal miasma that would greet the finer tuned sense of smell of generations who have grown with the benefit and dignity of functioning indoor plumbing. The reek alone would undo a fellow. 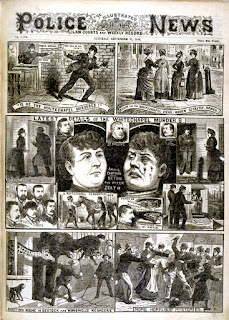 Not to mention the ferocity of the crimes committed by a criminal who has haunted the dark imaginings of generations yet has gained a certain immortality by virtue not just of the ferocity of his crimes but they way he has managed to remain a fiend without a face. Here we have forty tales of terror based on the events of that Autumn of Terror of 1888. Forty twisted tales that each in their way adds to the nightmare of an ident-kit fit; building a pathology if not a face. Some succeed better than others in putting together a believable pathology behind the mind that spilt crimson on the streets of Whitechapel. Although "believability" is hardly a bench mark when it comes to the truth of the ripper.
No one knew then and no one knows now. 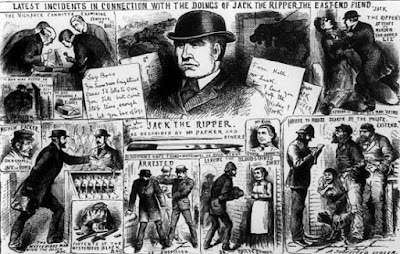 The levels of poverty in London at this time were heart breaking and just staggering. So many people from so many ethnic, cultural and religious differences all caught in a life trap few would ever break free from. People who literally lived hour to hour not knowing where the next crust of bread would come from. in the most desperate situations selling the only commodity they had; themselves. Immigrants from every corner of the world flooding in desperation to the largest capital city in the world.  Some seeking a new life and employment or fleeing the effects of religious pograms or ethnic persecution. Not so different from today after all although one cannot measure the standards of those days by the lack of standards of our own. They did what they had to do to stay alive. So many women forced to take to the dark, dangerous and unforgiving streets What makes a prostitute; the needs of others or the money they are prepared to pay to satisfy those needs? The rippers chosen victims were already victims of a terrible grinding poverty that would not let them go. This unseen predator strangled and then butchered their fallen forms even when life had already crushed their spirits and degraded their humanity. It is hard to imagine a harder or more pitiless existance. Their names are remembered because of they way they were torn from his world and their killer has achieved an immortality that could not be less deserved.
It is a dark and shared morbidity that keeps the memory of these crimes alive. Most of the great achievements of this age have been forgotten whilst the history of this Autumn Of Terror in Whitechapel lingers like an unwanted dark shade at the wake of the Victorian Era. Every now and then bold claims are made, wild theories abound, and Spring Heeled Jack always remains in the shadows.His terrible work done but like all monsters of his ilk returning again and again to the scene of his crimes in our own imaginations.
One of he most recent and most searing re-examinations of his character is to be found in the words of the song Jack by The Tiger Lillies. Martin Jaques is an incredible word smith and a brilliant deliverer of tragic tales of broken humanity. Towards the end of his opera Lulu A Murder Ballad he sings of his heroines fatal encounter with Jack and peels back the mask of history to give us a glimpse of naked devilry. It is disturbing and brilliant and is enough to make one feel ashamed of ones prurient interest n these atrocious crimes. Well truthfully until the next theory to the killers identity and motives for the crimes comes suttling out of another dark place.
We know what you were, Jack.
We just do not know who you were.