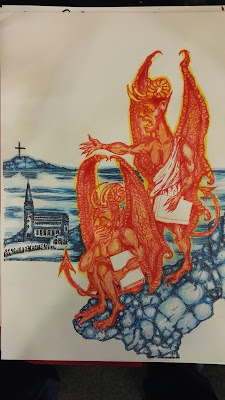 (From my sketchbook.)
Came across this picture in aq book on the history of the religious place of pilgrimage and holy shrine Lourdes( the book was called " Lourdes; Body And Spirit In The secular Age." by Ruth Harris.) Well, that is to say I came across the original print which my drawing is loosely based on. It depicts two scheming demons standing on a hill over looking the shrine discussing how they may mess it up as a destination for pilgrims. I think the original may have been a pro-shrine satire on certain voices raised in objection to the notion of Lourdes as a place of miracles and healing. Who can truly say if it is or it is not; it all comes down to personal belief.
I have no wish to appear cynical regarding peoples personal religious beliefs  or to try and take from them even the vaguest notion that there is the possibility of miraculous healing in this world. But is it not something else to think of evil forces as living entities, demons and such?  An embodied force that watches , waits and calculates how to undermine a moral dimension. Yet I suppose if we take the trouble to create an actual force for good then the balance of that is an equally real force for ..er,bad stuff. Like a Sauron with many different helmets.
Or a divine NogBad.
Posted by Malachy Coney Curiouser and Curiouser at 04:51