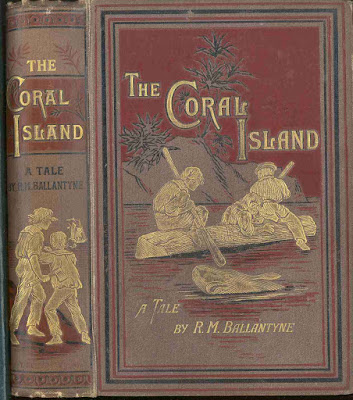 The great grandfather of all boy's own tales The Coral Island has been read by generations of young adventurers and journeymen(even if most of those adventures and journeys only took place in the space between their ears.) and I recently had the pleasure of reading it again. Not the abridged edition as published by Dean but the version RM Ballantyne intended. Actually the book I read smelt as though it might have been his own personal edition. Also the levels of violence seem higher than I remember from that sanitised Dean edition. Cannibalism rears its ugly maw a few times and with a head scratching degree of casuality  (Some brain matter is scooped and cooked at one point!)The Story is about three friends who find them selves shipwrecked and marooned on the most idyllic sounding island in fiction. Blue, blue clear water to dive, swim and fish in(with the occasional shark to avoid.) An amazing beach to sleep on and mountainous jungle forests to explore and have adventures in. Three good friends find themselves surviving and growing together, facing down dangers and seemingly untroubled by any inner demons of their own. The first part of the book is taken up mostly with the stranded boys surprisingly successful attempts to feed, water, shelter and even clothe themselves( without as much as a tube of sun-screen.). not in the least squeamish they do not hesitate to hunt, catch, kill, skin, cook and eat whatever island wildlife falls into their culinary demographic. People today can barely shop for food without becoming unbearably stressed. This is an age before anthropomorphic  empathy crippled us as a species..I am not baiting vegetarians there or those of a gentler disposition  as I do not believe my previous assertion. and am laughing at my own attempt to sound worldly.I am no Kraven The Hunter more your mercurial Craven the Coward. The second part of the narrative is more taken up with their life threatening adventures as well as a few experiences which act as affronts to their Olde Worlde Christian sensibilities.
It all feels terribly dated now. A very mannered Lord Of The Flies with the protagonists descending into more practical life adjustments than the chilling barbarism of our distant ancestors. Well, I say that in a cautionary fashion. Not so much distant as sleeping lightly not so far beneath the skin. You have to read with generously non-judgemental eyes as there are colonialist attitudes clunking throughout the text but it is still an entertaining read after all this time. It was a juvenile tale in the era of its inception and the years have morphed it into something else. This book and others like it would have lined the shelves of school libraries the world over. It is hard to imagine some of the tiles or book covers having social acceptability in the world as we understand it to be. And quite rightly so in some cases.
I never did read its sequel The Gorilla Hunters but it already sounds equally charming. One so rarely gets to go on a gorilla hunt these days. 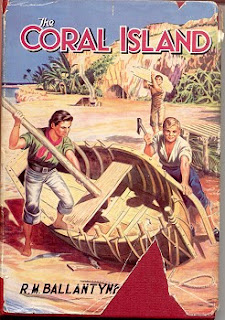 I first read this book as a boy in one of those abridged editions published by Dean. I seem to remember a time when the world seemed filled with cut down classics published by Dean with colorful covers that stimulated hesitant readers into picking them up. Covers which when seen now seemed possessed of an almost religious innocence(now that is a tautology if ever I read one). Covers that seemed to suggest there is no situation a stout hearted Christian lad cannot handle by virtue of their er, virtue. I do not believe the adventurous next generation look to distant horizons for adventure any more. It is hard to imagine them looking beyond the screen of a hand held device really.The pursuit of celebrity or fame seeming to occupy the destination of choice once heralded by a life beyond the familiar horizons..
Or maybe that is just my fear of a future that sets no store by my own feeble aspirations.
My desire to get to the moon in a wooden rocket.