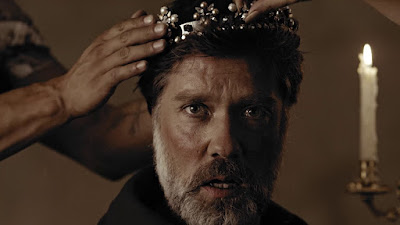 "At a lavish banquet, King Dionysius is confronted by his servant Damocles, a brat who is jealous of the King's splendor and power. Through supernatural forces, the two roles switched,. The smug inexperienced commoner becomes the King. But his joy is short lived. He quickly realises that being King is not all crowns and cheeseburgers. With great power comes great responsibility."
This is the intro to the quite stunning new music video for the Rufus Wainwright song Sword Of Damocles. The video is directed by Andrew Ondrejcak and stars Rufus wainwright and an actor called David Criss (a man who has been given a severe whopping with the handsome stick. This is one good looking man. In his Vivienne Westwood clothes he has jumped to the top of my wish list for Christmas.I know how shallow that sounds but damn he is a honey.) The video (can one still call short music films "videos"?) is a warning to all those who seek to occupy the seat of power and the danger that constantly hangs over ones head.The lyrics are compelling, delivered with mournful gravitas by a fine voiced Rufus Wainwright. Quite beautiful and starkly threatening at times, switching from stroking damocles curly hair with affection to warning he may cut off his head. It is the sort of a thing a King may do. The love of Kings and Queens is a mercurial thing.
"Uneasy lies the head that wears a crown."
Shakespeare said that, or rather he put the words into the mouth of King Henry IV.
Possibly the title of a follow up single to this lovely thing.
It is quite a politically charged song with regard to the political and social situation America, and the rest of the world, is currently going through. In fact I would go as far to say you would have to be watching this and listening without benefit of a head not to pick up on it. I do think it also works on other levels as well, its just a beautiful song beautifully performed with a haunting and thought provoking video to accompany it. A brain worm so to speak...it gets right in there... 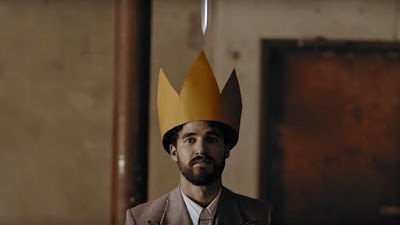