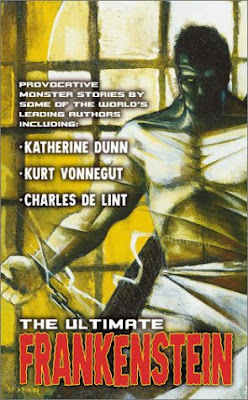 The Ultimate Frankenstein is an anthology collecting a series of stories that riff on the original novel by Mary Shelley, covering a wide range of the same themes a very young and seemingly unworldly Shelley covered in that work. Some truly stellar talent bring much to the dissecting table with a string of tales not for the squeamish, easily offended or those not intrigued by a love that barely has a name. it is a broad and hideously detailed blanket that settles about the shoulders of this two hundred year old text. Themes such as loneliness and hubris, love and dismemberment, creation and destruction, all these themes are touched upon, with some startling and rewarding innovations, quite quickly sorting out the men from those who blush easily. It is not a collection for the coy or as i suggested the easily offended, but then why would such a person be looking through a Frankenstein anthology. there is some lovely work in hereand the collection serves as a timely reminder of just what a genre formative work the original was. Surely one of the first and certainly most enduring works of science fiction, brought into being, and created from some rough shod, long before such a term or notion of genre material existed.
I attempted such a story myself, back in the day. We Belong Dead it was called. A story about the creation of a surly adolescent creation, until at some point I realised I was merely writing the story of any teen .
Mary Shelley crafted a being that lives way beyond the constraints of the medium it was born into. Mother of Frankenstein and midwife to a new age of Gods And Monsters. 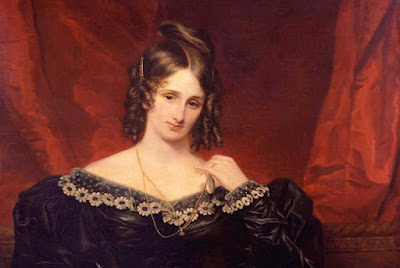