David in the Orrery. 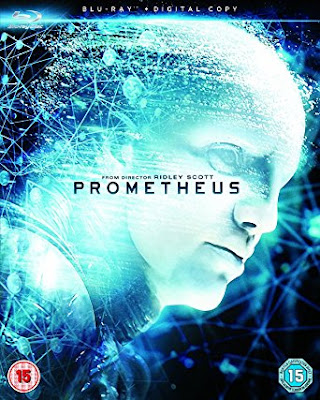 What a splendid evening. Front door and windows wide open, revelling in the rare sunshine of an early Northern Irish night and then the treat of Prometheus on the telly box, With the blistering soundtrack blaring as the man droid David whirls in child like wonder as the Promethean Orrery (An orrery is a mechanical model of the solar system that illustrates or predicts the relative positions or motions of the planets and moons contained therein.)displays itself in a visually stunning sequence that never fails to give me goose bumps. David is a monster. a man made and made monster. The Post-Modern Prometheus but the sense of wonder he exhibits exceeds his programming in much the same way I suppose as his casual cruelty towards the species that birthed him. For whatever reason, The Engineers were on their way to Earth to wipe out humanity or perhaps just to test the effects of the black goo on the upright monkeys infesting their attempt to recreate paradise. And this stunning piece of stellar cartography shows the path they were to take across the stars.
In order to create one must first destroy, David reminds us at one point, signposting his intentions when it comes to him dabbling in his own workshop of filthy creation.
Its the sort of thing Gods say, I suppose.Whatever creed, whatever pantheon, their dispassionate cruelty supposedly above morality, or the accepted notions of such, mere mortals attempt to live by. When in fact the Olympian Hoi-Poloi are fueled by nothing so much as resentment. Probably the most destructive and elusive of all human character traits. There is nothing a man or woman will not do when possessed by this sense of entitlement. Its a deadly sin that never gets a mention. That is how insidious it is.
And Ridley Scott gave birth to a character riddled with it.
Scary stuff.