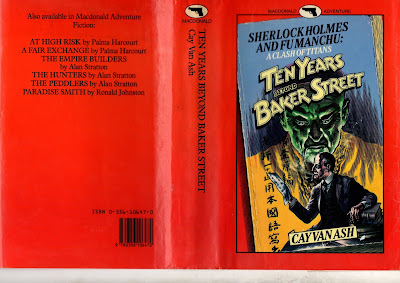 Finished this in the early hours with the sound of a sudden cloudburst drumming a tattoo on my roof (The actual roof of my house, That is not a euphemism for the top of my head). Cay Van Ash comes across as a hybrid of Conan Doyle/John Buchan/ Sax Rohmer but has just enough of his own voice to propel the narrative forward in a vigorous fashion. He even manages to make Wales seem like an exotic lost kingdom of hidden valleys and storm lashed coast lines.(Which it probably is as they film so much of Doctor Who there.). His Doctor Petrie is pretty much as Sax Rohmer would have him and his Holmes is an older even more insular figure than Doyle wrote him. He carries a sadness that he never did under his original creators tenure. Perhaps it is because now he truly is a man out of his own time as the Victorian age is past and his formidable skills seem tempered by the changes of society at large.
It is an entertaining ride with many unexpected thrills. The characters are well observed and their situations engaging, as companions are traded and roles swapped around. For Petrie must engage the aid of Sherlock Holmes to find and possibly rescue Nayland Smith from the clutches of his nemesis The Devil Doctor Fu Manchu who has abducted him. Is his friend alive or dead? Has the evil genius surgically altered his helpless foe to have the head of a salamander and the gills of a puffer fish? Will Holmes even allow himself to be coaxed out of a well earned retirement in Sussex raising bees? The author cleverly weaves so much around established canon(No easy thing when you consider the sheer bulk of material that exists around Holmes) that it is entirely plausible to see this period in the Great Detectives life as yet another that remained unspoken off for so long but which took place when the world thought he was busy doing nothing. I enjoyed the pacing of the novel and the adventure very much. Anyone expecting Robert Downey jnr Indiana Holmes type pacing might find it a little slow moving but then they are probably reading something else(GQ magazine at a guess.). There are a couple of bar scenes in country taverns and in my minds eye I am sure I saw Kenneth Moore in a smokey corner having a relaxing pint and a puff on a pipe.
Fu manchu is as brilliantly devious and mysterious as ever in this book. There are no mere cameos or homages at play here, It feels as authentic as anything in either canon. I would be surprised to find a follower of any of these long lived and much loved characters who did not feel it was a worth having in any-ones collection. Might be a bit tricky to find a copy but is that not a significant part of the adventure of book collecting?
As adventures go there is a nice reward at the end.
Posted by Malachy Coney Curiouser and Curiouser at 03:04