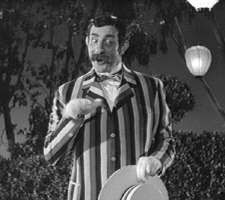 (From my sketchbook)Was watching The Adventures Of Sherlock Holmes as part of a truly beautiful box set collecting all the Basil Rathbone Holmes movies and was completely taken with this. It is Holmes in disguise performing at a garden party a young woman he is protecting is attending. He disguises himself as this entertainer and sings and dances and it was minutes before I realised it was actually Holmes. Basil Rathbone really goes for it and is quite excellent and completely plausible as an end of pier singer. There is a deft lightness of touch and a lyrical spring in his steps as he kicks up his heels. It is a side of the actor I had never seen and was dazzled by his quirky performance. Inspired to scribble actually. I have been listening to his readings of Edgar Allen Poe stories which he does just magnificently. His instinctive intonations lend the baroque quality of Poe's writing a gravitas that impresses the ear.He could have made shipping forecasts sound ominous. Which I suppose they are if you are a deep sea trawler fisherman. 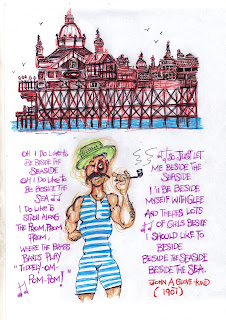