Quatermass And What Waited Beneath. 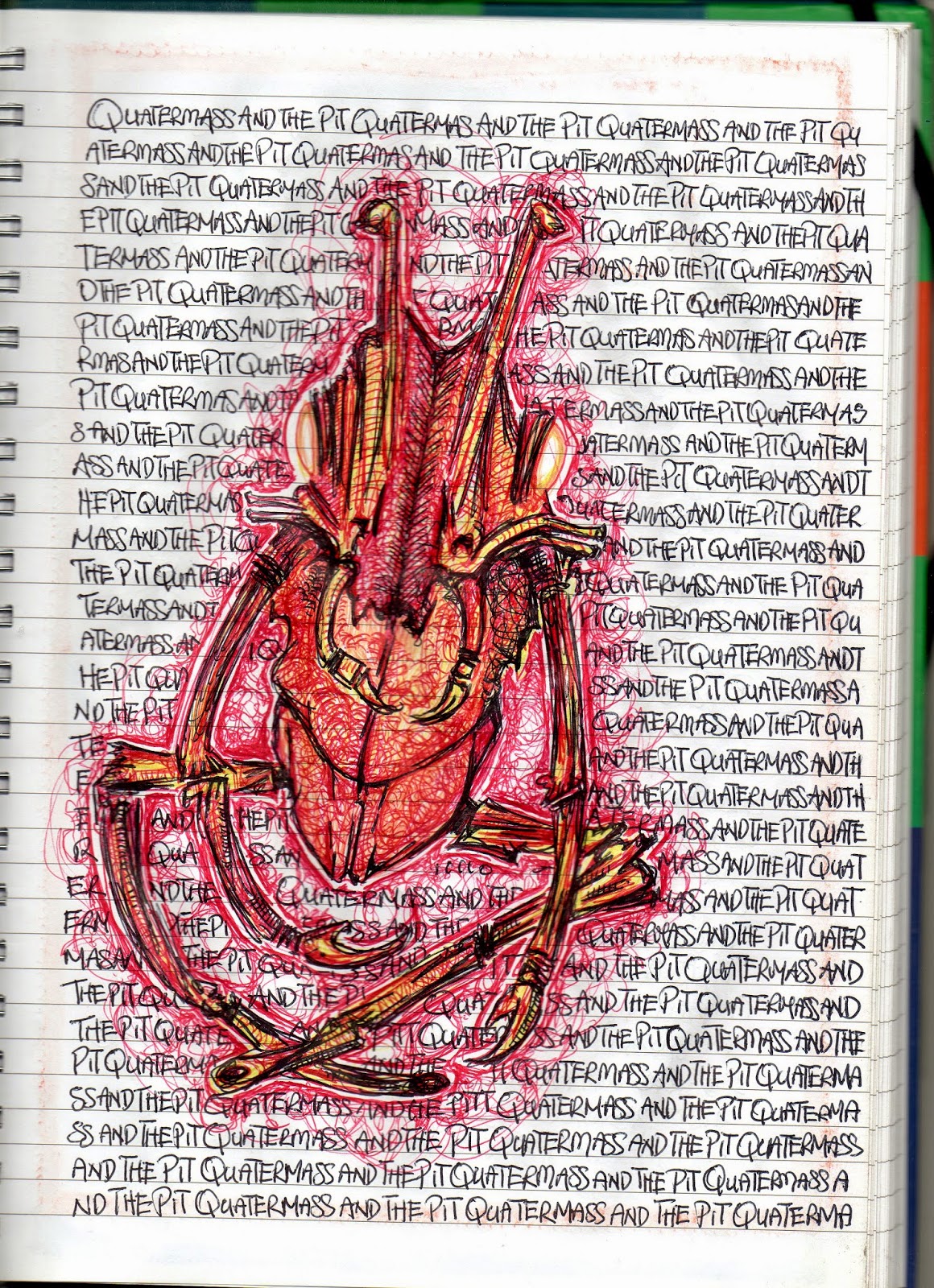 (Alien art from my sketch book) Martian; a word long worn out long before anyone turned up to claim it. Professor Bernard Quatermass mentions this to his colleague Rooney as he ruminates about the human race's possible origins as the genetically engineered offspring of visitors from the red planet a very long time ago. Only someone who can wear a bow tie with that degree of casuality could make  so bold and sweeping a claim without sounding like a boobie-babbler.
It is a line from the television series Quatermass And the Pit which starred Andre Morrell in the title role. And what a superb Bernard he was. Looking and sounding every inch the brilliant and far sighted scientist who built The British Rocket group with his own bare hands. This man was one of the original pioneers of the space race. A brilliant maverick thinker and self made man. At least in the hands of his creator Nigel Kneale he was and who can fail but to get behind a maverick. I know I like to. He was a sharp dresser too wearing bow-ties that required no quirky defense for their presence beneath his chin. In space no one can hear you say BOW TIES ARE COOL. Bernard Quatermass knew something instinctively The Doctor himself only learned after hundreds of years defending a town called Christmas; COOL IS NOT COOL.
Up to this point Quatermass had experienced two  deadly encounters with life forms not of this earth. On this occasion his creator Kneale pitted him against something which turned the whole notion of earthly origins on its head. It really was a fantastic script that delivered insights and terrifying thrills with Mozart precision. Not a note out of place. The world as we know it has changed so much since this series was transmitted in weekly episodes from monday 28th December 1958 through until Monday 26th January 1959, attracting record viewing figures along the way. Literally holding a breathless and terrified nation in its grip. Imagine hurrying back from the pub to catch the episode as it was going out. The sense of anticipation that came with knowing if you missed something when it went out you just were never going to see it again. Even after all those years and those changes that script holds up.
Hammer Films brought us back to Hobb's Lane later in the sixties for a truncated movie version of that same story. I remember it from one Saturday night long ago, knees drawn up beneath my chin watching the story flicker and unfold on our black and white television, science wedded to horror in a story set in the London Underground and on one of the great fictional haunted streets. It had me from the opening credits as a jigsaw skull formed about the title with an afterglow generated by some satanic pit. It segues into the sight of an old London Bobbie on patrol, a trustworthy Dixon Of Dock Green dander, eyeballing a local moggie also on a patrol of sorts, a grey cat, at night all cats are grey. He clip clops, distinctive Hammer footsteps, towards the entrance of Hobb's Lane Tube Station, where we follow the sounds of some working class blokes digging in the dirt,laying a new section of line, unearthing a series of skulls that tell a tale five million years untold.
I SUPPOSE IT IS POSSIBLE FOR GHOSTS..LET US USE THE WORD..TO BE PHENOMENON THAT WERE BADLY OBSERVED, WRONGLY EXPLAINED observes Quatermass thoughtfully as the background information and history recorded in Hobb's Lane begins to tell a very long ghost story indeed. From the very start we see ordinary folk beset by he extraordinary. Yes there are archeologists, rocket scientists and military leaders but there are also brickees and Cor-blimey squaddies looking into an abyss whose origins are as dark as the gulfs of space which seprate worlds. Distances which are not perhaps intended to be crossed. In this story we witness the shotgun wedding between science and superstition whose feral offspring run rampant through the streets of London.
There are four Quatermass stories in total, and there have been different versions and interpretations of these over the years with no actual definitive version. Nothing wrong with that,a good idea can have a certain elasticity. My personal favorite is The Pit. The television version, its length and believable performances with assured direction and production values produced something of breadth and quality that stands the test of time well.
Time will also tell if there are to be anymore versions.
Stand Up Bernard Quatermass.
Your Planet needs you.
Posted by Malachy Coney Curiouser and Curiouser at 06:31