Having sampled something of the life of the grizzly old lion I decided to have a look at the early years of The Lion's Cub. i thought i was fairly familiar with the details of the young queen's life having recently re-watched the seventies BBC production with Glenda Jackson in a career best. Yet this detailed book tells me there is always more to learn. The thing is, looking back on historical events is a done deal, all outcomes have been worked out, for good or ill. It is what it was.  And with a figure like Elizabeth the First, there were so many twists and turns, so many possible outcomes, one could fill a shelf with biographies, but it is David Starkey's which is in front of me.
As I said, looking back on events and thinking we understand all possible outcomes is a gift of hindsight. given the circumstances of Elizabeth's birth, the complicated nature of her parents relationship, it was by no means certain that she would ascend to the throne of England. It all seems so obvious now, that Elizabeth was to become the Faerie Queene, the most famous of all the kings and queens of england, rivalled in reverence only by Arthur the fictional king.
Hazardous is the word which springs to mind most readily upon learning of the early years of this young woman, a princess decreed illigitimate by virtue of her mother's fall from favour. Henry's passion for her mother tore the medieval world apart, but it was a passion that ended in bloody execution. Setting the template for how history would remember her father. Imagine growing up in the shade thrown by two such figures. Imagine the force of will it took to step out from that shadow.
Most of the book takes place before Elizabeth becomes queen. oh my giddy aunt, talk about your early years of struggle.  Always the focus of other peoples plans and schemes, the offsping of Henry Tudor and Anne Boleyn had to circumnavigate most treacherous waters. There were so many who just wished to use her as a stepping stone in their own ascent to power. This was the real game of thrones, played for real. The young Elizabeth had to use every ounce of her prodigious intelligence just to stay alive, to not go down in bloody complicity with those who schemed their way to the throne.
Who to trust?
The great question of Elizabeth's life.
It is a great life story. One even more interesting than her own fathers. Perhaps it is because she had so many forces alligned against her. I suspect even in her early years, "weak and feeble" as she was percieved to be, every now and again a flash of Henry in her eyes would have reminded all she was the cub of a lion. As Hilary Mantel once mused through an observation by Thomas Cromwell "you can rub and stroke the royal fur
but just imagine what those claws would do."
I tried to imagine the suppressed rage of a young woman who would be reminded every day that her father had caused the death of her mother, that she had been unjustly disinherited and declared a bastard, who had been taken in and then abused by her uncle, who had been sent to the Tower of London, within walking distance of the very spot her mother had been beheaded. Then factor in a thousand daily sleights as she moved through her early years, treated as little more than a means to an end, and at the end of the day to sit upon the throne of England, Glorianna...
Why her claws would give Shere Khan pause... 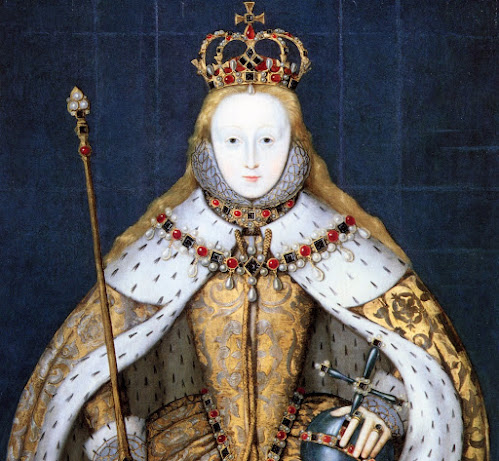