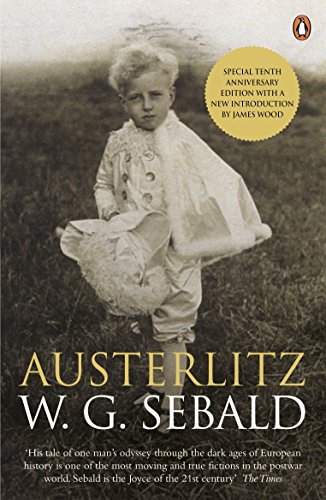 Found this book on a post lockdown book ramble. Thought it had a very haunting cover, with this otherworldly child in a curious costume, looking like he was passing through our world on his way to some lost kingdom. Some photographs have that phenomenal aura a about them, particularly some older black and white prints. the title also caught my eye.  I vaguely remembered it from a  Youtube video by John Rogers, the London Perambulator man, who likes to take long walks in and about London, discovering lost or forgotten corners and sharing insights and stories, past histories and urban legends. The back catalogue of his recordings take up many, many hours on Youtube and are a remarkable archive, which are never a chore to watch. In fact they often feel like the ramblings of an old friend, as he shares his stories (his walks with Iain Sinclair are particularly interesting.) I remembered the name Austerlitz as having some connection to an old Jewish cemetery in London but could not remember the context. Anyway I picked up this copy of the book and it sat in a carrier bag next to a copy of Michael Moorcock's King Of The City which seem to yield a curious symmetry.

I am now so glad I did pick this very special book up. it is so beautifully written, with long rambling passages, the train of thought of a beautiful thinker. The book is not broken up into chapters which serves to make it a long continuous read. A recollection of conversations shared. Years and years of friendship and a search for a life not lived.

As a boy Austerlitz was smuggled out of Europe to escape the advancing Nazi horde. As a lonely snowy haired child he was adopted by a Welsh minister and his wife and brought up in a remote house by two equally remote adults. I do not know if smuggled is the right word,  evacuated or rescued would be more accurate, given shelter by a childless couple who were perhaps not suited for such a situation, though one cannot fault them for trying to provide a shelter for a lost boy. His previous identity was stripped away, reduced to a blank, with no one making a substantive effort to create a new one. Too young to form memories that would act as a foundation for what was to come Austerlitz grew unaware off all that had come before, as surely as if he had landed in a cornfield in Kansas after a long journey through space from the lost world of Krypton. The ghost of the person he might have been, dislocated, disconnected, cut asunder from those who birthed him, who might best have cared for him. The trauma of that seperation becomes the invisible ghostly companion that dogs the steps taken in his new life, whatever that might be, as he grew.

And grow that child did indeed do, but really into a larger version of that boy in the costume. A brilliant scholar, filling his life with books and the observations of others. Offering him a life time of learning and reflection, everything from classical architecture to the life of silk worms and their relation to the construction and organisation of internment camps (Really....)His was a luminous intelligence, locked the a fragile human cage, gasping for understanding and at times paralysed by revelation.

The book is illustrated by seemingly random pictures which are always pertinent to the dialogue. Like the fingerprints of a life lost and looked for, ghostly proof of the scene of a crime. The crime being man's inhumanity to man, the cruel indifference of man made systems.

Yet Austerlitz is also brave enough to ask other questions, one being was this life of academia actually a wasted life. Consider the many years of study by Austerlitz, filling notebooks with learned information, note books he eventually threw on a bonfire, lit during a breakdown. As if to eraze another lifetime the accumulated knowledge of a live not quite lived. Austerlitz seemed the embodiment of the lonely academic, the sad and distant face of the lonely scholar. Using knowledge as a shield to all the random collisions and casual brutalities of daily life the world over.

He does manage to discover who he was born as, where he came from, and that knowledge comes as a fracturing collision, plummeting him into a lengthy state of ill health. His early life experiences do not prepare him with the ability to absorb that knowledge. Even personalities require foundations to carry the crushing weight of life. It needs something to rest upon. Childhood seeds the years and can bear a bounty of strange fruit. For a while he crashes and burns , a mental breakdown follows and his meandering recovery does take time. The undercurrents of this old life off ours can be treacherous and unpredictable and can ruin a person. mind you, it helps to have a few good friends along the way for times like this.

I would not wish to suggest to a possible reader that this book is simply dipped in melancholia,there is so much more going on in it. For me the only stretch in credulity was the detail of the vast stories recounted, the way in which the stories are remembered and relayed in quite beautiful detail. A court stenographer would have had his work cut out with Austerlitz's ramblings. Especially as there is no pausing for chapter breaks, barely a moment to draw a breath before recounting more. A prodigious memory, or perhaps the real storyteller.

Find a space somewhere on your shelves for a copy of Austerlitz. find a home for his words, a place for him to be. something he searched for all is life.

Both of them. The boy he was and the man he almost became. 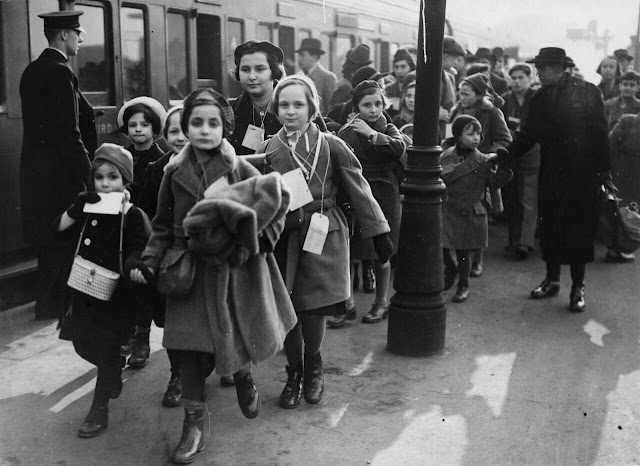