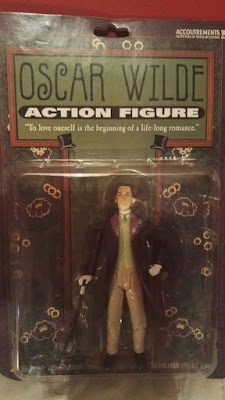 Now this is what I call an action figure. For the boy, or girl, who wants to remain thoroughly modern. Garth Ennis picked it up for me from a store in New York. Who would have thought, a store in New York that sells odd little things. Its a lovely thing all the same. I suspect Oscar would approve. Him being a full on celeb and media figure before the world even understood what that was. Celebrity being the ultimate disposable today. Oscar blazed like a meteor in his time. A heavenly spectacle that crashed and burned when it fell to earth.
The flame that burned twice as bright burned only half as long.
Posted by Malachy Coney Curiouser and Curiouser at 03:26