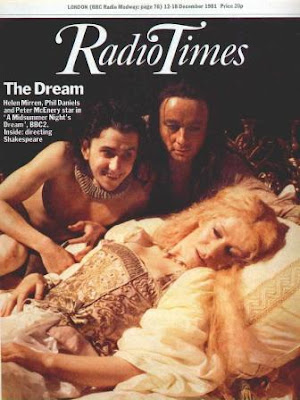 If you find yourself struggling or indifferent to an enchanted frame of mind and possibly wish to open an envelope mailed from the land of Faerie then you could do worse than to give this old BBC adaption of the Shakespeare play a view. Or a couple. Or a thrice. Sometimes it takes a while for these things to percolate past our reserves of modernity to the forgotten pagan inside. The one who believes in magic and all the possible others. it is such a strikingly beautiful adaption that looks and sounds ethereal. one to light a fire in the heart of ones imagination, the seat of dreams. I found a copy that some one had donated to an Oxfam book store near me and it has charmed me no end. I have been glamoured by Shakespeare.
This version has the most amazing cast. Almost every part played by a familiar old face that are so good at what they do they make it seem so natural and easy.  There is Helen Merren as a beautiful but equally other worldly and imperious Titania. See Phil Daniels as a punk street urchin Puck who seems filled with a boundless energy yet also slyly natural. And what a joy to see Brian Glover as Bottom. That Dead-pan delivery in the dourest of northern tones whose transformation generates a magical smile despite the fact you know its a coming. The whole production has an wonderful dark wintery night production feel to it. As though it ticks every box that made the BBC a creative force to be reckoned with the world over. It is a joy and it is a keeper.
"Lord, what fools these mortals be!"