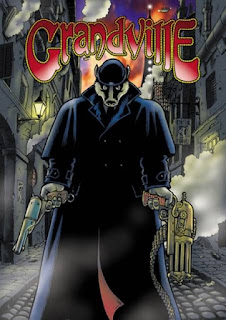 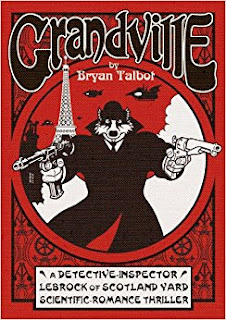 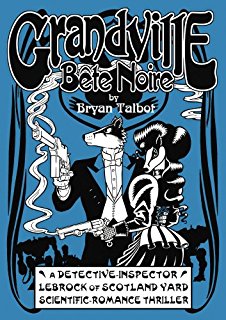 It has been a while sincw we had a new volume in this absolutely fantastic series of steam-punk anthropomorphic detective yarns. Grandville Noel was about three or four years ago and a superb story it was too, a bohemian tour de force. there have been four to date and each one is a piece of artistically rendered world building that makes me so wish that Bryan Talbot had the time to do one a year. Bryan Talbot's ability to create whole worlds on paper using pen and ink has affected me in much the same way as Herge and his series of Tintin books. I have always understood I am reading stories not set in the real world but for the period of time I found myself between the covers of a volume I was immersed in a world of someone else's making. Bryan Talbot is an alchemist in that regard, sometimes creating pure gold.
There is a Snowy Milou reference in one of the tales which got me all choked up. Honestly, felt so emotional seeing a beloved lifelong character in such a sad state that was so artfully employed I could not help but choke back a sob. I will not say which book this appeared in as the stories are loaded with bueatifully and joyful "Easter Eggs" I would not wish to diminish the impact for any reader.  I do hope he is rightly celebrated for this remarkable ability. I hear Grandville was once nominated for a Hugo Award which is off course a huge honor. I cannot imagine what may have surpassed his creative vision at that time in that it is not more of a case of describing Grandville as a Hugo Award winning series as it certainly deserves to be thought of with that degree of respect.
Archibald "Archie" Le Brock is one of my favorite fictional characters, right up there with The Doctor and Sherlock Holmes and Basil Brush.
Posted by Malachy Coney Curiouser and Curiouser at 09:52