Jake Arnott's latest book is set in the skanky underworld of London in the 1700s, a world where degradation and brutality seemed the order of the day.A bone deep world-weariness is the common bond shared by every man, woman and child born in this era. Life in the inner city seemed like a deadly spiderweb bedded in misery. There has never been an easy priod in human history for the poor but some eras are worse than others( Sounds like a song by Ye Olde Smiths.). Jake Arnott has picked at the scabs of history and drawn forth a flaky tale of The Fallen and the depths we can sink to when surrounded by the right and wrong friends.
The story begins in the wake of the disaster following the South Sea Bubble bursting and the lives that were destoyed when it fell apart. There are no waters more deep nor latitudes more unforgiving than the tempest of financial ruin. It is agreat love story as well, the tale of Jack Sheppard, house breaker and infamous jail escapee, and his whoring pick pocket lover  Edgeworth Bess. A proper love story it is too, whatever that may supposed to be. Full of the random insanity love inspires and the cruelties that most noble and inspiring of emotions may bring about. I think love is like a sparkling clean stream running downhill to collect in a clear  pool for the thirsty to drink from. Only, when one tracks up stream you find the rotting carcass of a dead sheep through which your sweet drinking water has passed. Mind you, I am no expert when it comes to matters of the heart. Jake Arnott in his past work has demonstrated a great understanding off the complexities of the human heart and its many dark corners. There is no sense of " Oh well, now I am reading the thoughts of the bad man" or "now we get to hear what the good person thinks."He writes about human beings and the appalling contrariness of the human condition as the good and the bad in men and women are just flip sides of the same coin.
"Give no thought for the morrow" they were advised from the pulpit. As the poor and reeking congregation sat quietly but studiously stealing from each other. And boy did they take this advice to heart. Guzzle in the moment for no one knows how many moments one has left. London was a dirty place to live, a hard and unforgiving place to try and build a life of worth, dirty and hard in all senses of the words. A sodden miasma of human waste and desperation where cleanliness was a state of mind and soul and not a state one generally found oneself in. Jake Arnott's work is not for the faint hearted. He tells us of the world and its history as it was and not as we may fancifully hoped it would be. Peter Ackroyd's history of London also covers this period in engaging detail and everything you need to know is bullet pointed with insight and humour and a genuine street wisdom.
Stick on a Tiger Lillies album while you are reading it and fell yourself fall under a spell.
I know I did. 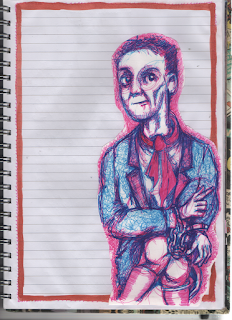 (From my notebook;Jack Sheppard in his Newgate cell.)
This is a variation of a sketch made of Jack Sheppard while he was incarcerated and awaiting the rope in Newgate prison. The gesture he is making is one that Sheppard himself assumed The gesture
he is making is one that Jack Sheppard himself assumed whilst posing for the drawing. The resulting painting is attributed to Sir James Thornhill circa 1723, after visiting Newgate to do the sketches for the final piece. I wonder if he wore a nose-gay? For every single account of the place suggests it smelled like the deepest darkest cess pit of hell. A punishment in itself.