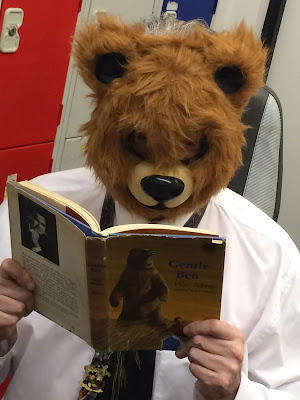 What is that I am is reading? Why its Gentle Ben by Walt Morey. Anyone remember the television series from the late sixties? Ben's friend Mark was played by Clint Howard the brother of Ron Howard. What a talented family. The world seemed filled by friendly animals back then. There was Skippy, Flipper, Clarence the cross eyed lion, Champion the Wonder Horse and Ben the rat to name but a few. I had one called Handy Andy. He was a friendly octopus I made up stories about. Good stories too. In them he met other sea faring characters like Marine Boy, Captain Nemo, Aquaman and Desert Island Dick.
Boy, I was a lonely child.
Posted by Malachy Coney Curiouser and Curiouser at 10:12