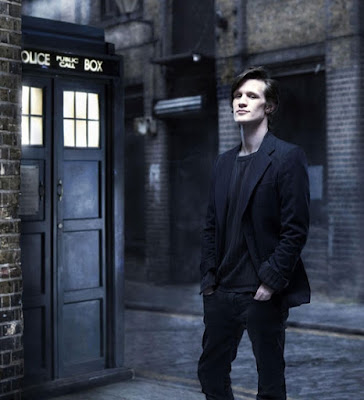 Way back when it was announced that David Tennant was leaving Doctor Who( Oh the wailing and gnashing of teeth in my living room alone.) and Matt smith had been announced as his replacement/regenerative form/new incarnation /old shoes new feet..I saw this photograph knocking about on line and thought this was how he was going to play it.
And let me tell you I would have had no problem with that.
The whole look has an elegant understated functionality about it. A sort of Will Self-ness..
It is probably just a bit of clever photo shop ( I say "just" but it requires a degree of talent) but it had a certain tone. One that would have projected an interesting frisson.
Who knows..
I do miss this interpretation of The Doctor.The sheer joy and respect Matt Smith brought to the role. I remember friends of his in the press saying that he is nothing like The Doctor in real life. That is all in his performance and as such my respect for him rocketed. My brain was already hard wired to accept his new face as The Doctor but who could fail to love that Pre Raphaelite face. The otherworldly charm of a two thousand year old alien. I mean, How does one account for that unmeasurable quantity in a bodies personal make-up?
With no new Who on the horizon for quite some time it is comforting to have such an amazing body of recent work to fall back on.,some brilliant stuff too..
Mind you with the great Titan comics and the always amazing Big Finish productions it is not fair nor even possible to say there is no forthcoming New Who.
There are tons of it...
Posted by Malachy Coney Curiouser and Curiouser at 06:38