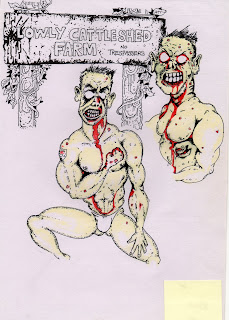 THE DEAD!THE DEAD!THE DEAD ARE RISING FROM THE UNQUIET EARTH!FEASTING ON THE FLESH OF WE WHO LED THEM TO REST!THE ARMIES OF LAZARUS HAVE ARISEN AND NONE SHALL KNOW THE PEACE OF ETERNAL SLEEP AGAIN!THE LIVING WILL ENVY THE DEA...WHOA!SERIOUSLY UNDEAD DUDE HAVE YOU BEEN WORKING OUT?
The above is a sketch from a script written by the horror writer Wayne Simmons. A story I have drawn as a short comic strip with the theme of a zombie nativity. Not something you are likely to see on a greeting card anytime soon. The original script did not call for a buff zombie. Alas few situations do but I thought WHY THE HELL NOT!
Wayne is a terrific writer with an impressive back catalogue for a relatively new writer. Theres FLU, FEVER, DROP DEAD GORGEOUS and DOLLPARTS. Read FLU and you will fear the sniffles for the rest of your life. The locations in his book resonate with me as do some of his characters. They feel very real. He is a charming fellow as well. With no airs or graces. I helped with a Halloween signing of his and we had a great time. He zombied up for the occassion because he thought his readers would like it. And they did too. He also has some amazing tattoos. In fact he is the most tatooed writer I know. Way in the future some museum may well have him flayed and mounted as part of a horror novelist exhibit. Er..sorry if that sounds grusome but book collectors can be a funny lot. Completists exist on the borders of sanity.