Monkey In A fez. 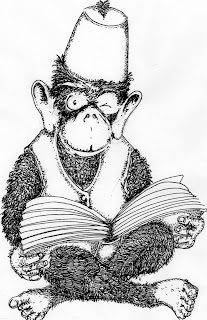 I was walking down Pottinger's Entry on my way to the chemist to pick up some painkillers. My arthritis was acting up, a bit of bone grinding on bone and I felt I needed something to take the edge off. Was only halfway through a working saturday too. I had just passed a busker with an amazing voice who was belting out a soulful version of The Town I Loved So Well.and was drawing level with the Morning Star pub. I was just hobbling past a table outside where two girls were sitting downing pints of beer. Both wore track suits and both had mobile phones. One of them had her feet up on the edge of the table whilst she texted with one hand and drank from her pint glass with the other. She had a Noel Gallagher thing going on with her hair and her thighs filled her track suit like she played midfield for United. The other girl was half sprawled accross the table top with her mobile clutched to her chest and the pint glass in the other. She had a twisted smirk on her face and obviously favoured the same hairdresser Brad Dorf did as Grima Wormtongue in those Middle Earth movies. Lank black strands hung down like a lace curtain over an open grave.
As I passed both barked loudly in disdain.
JASUS CHRIST ITS CHARLIE CHAPLAIN.
The girl with her feet on the table snarled at me with a gravelly rattle.
I WOULD RATHER BE CHARLIE CHAPLIN THAN FRANK OUT OF SHAMELESS.
I just blurted this out in self defense as her mate cackled like a rusty hinge.
She swung her feet off the table and got to her feet and I thought for a moment she was going to leap forward and deck me. Honestly, she wore the track suit with the casuality of an olympic boxer.
DONT YOU FUCKIN JUDGE ME YOU CHEEKY BASTARD!
I flinched with the sheer violent intent of her response. It felt like she had indeed slapped me.
And I saw in her angry face a completely unexpected degree of hurt.
Actual hurt. As though I were the one who had randomly insulted a complete stranger. Her wee chum looked at me with utter hatred in her eyes. She had a medieval quality about her. With the hoodie up she looked like a stone carving hanging from the roof of a cathedral.
I hobbled on down the alleyway. In an evil hobbly way. The way people with a limp do. The unnatural gait that invites comment from strangers. Sometimes as I pass strangers I feel somewhat as Richard the Third must have. Incomplete. Misformed. But I am not. None of us are. Nobody is. There is no physical ideal. Humans come in all shapes. Its just a limp.
I did hope she was not going to sprint down the alley and give me a severe bashing outside the Doc Shop. I did not want to die so close to the Inn Shops. I still feel I have some little to give.
She did not. I risked a glance back and saw they were both still glaring in my direction. Just lounging in their loose ensemble of sports casuals awaiting fresh orders from Mordor.
To be the object of their disgust felt unfair to me. Surely they should not dish it out if they cannot take it. And there something in the way she reacted to my response to her comment. Had I judged her? She certainly felt I had. I felt bad. In the chemists I checked out some bottles of herbal rescue remedy for panic attacks and briefly considered buying a bottle and leaving it on their table on my return to work journey. Then I considered where that bottle might end up and I took a different street on the way back.
Maybe from a certain perspective I was dressed like Charles Chaplin. I wore a shirt and bow tie and baggy trousers. I thought it was more like Lee Thompson the Madness saxophonist . As he looked in the Madness video for ...Baggy Trousers. A great favorite for me and my mates back in the day. Post punk nutty dancing wearing a fez to Night Boat To Cairo on the Shamrock dancefloor.
Happy days.
Have a set of bookends at home. Two monkeys in waistcoats and fez. Picked them up in a closing down sale of a store that was an early victim of the current world recession in retail in the high street. Very fond of them. They support between them the books I have yet to read. Thats the books I own I have yet to read not all the unread books in the world. Everthing between them changes regularly.
Monkey in a fez.
Cool.