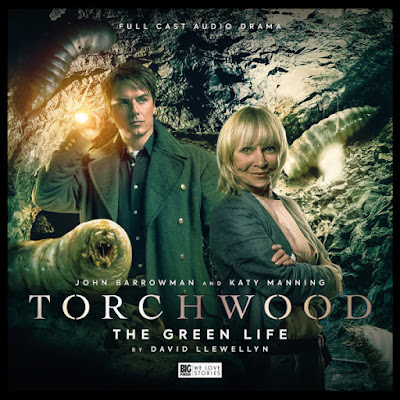 Jago And Litefoot, Iris Wildthyme, The War Master, UNIT and Missy; Big Finish have expanded the Extended Whoniverse to the point where their on-going collective is an embarrassment of riches. Just so many great things to chose from and yet they continue to innovate and surprise. One of their latest excursions into the darker corners of the worlds of Doctor Who is a mixture of nostalgia and eco terror. Actually make that commerce-terror as it is really about the monster that market forces have become in this funny old so called modern world of ours.
When I first heard that Jack would be meeting Jo ( "Jack And Jo" now that has the ring of a joyous spin-off.) my first thought was "Sparks will fly, Barrowman and Manning will mix like dynamite and fireworks, I could already hear the saucy laughter in the Green Room extras on the disc. and by Jove, this proved to be the case. They were fantastic together. I remember how buzzed I was to see Sarah Jane and The Good Captain interact on screen and this is more of the same delicious serendipity of personality.
The story is just as timely as the original was way back in the day. The Green Death addressed so many of the genuine concerns the ordinary man, woman and child in the street had for their environment. The terrible waste produced by industrialization had to go somewhere so why not down into the mines were the working classes toiled, poisoning them and turning natures little cleaners into fearsome horrors. Yet it was more than just a cracking script that made that story so memorable. the UNIT Family was starting to break up and this story ended with a major schism. Jo Grant, the beloved companion of the Doctor was about to take her first steps into the world without her wonderful mentor. They were assembled together in The Nut Hatch in Wales, a military who leaned towards defence of the people not only from the horrors of what lay beyond this world but also from the monsters we produced ourselves. Be they mad scientists, their Frankenstein experiments gone awry, crazy computers and now the horrors spawned by man made pollution. As I said, its as timely now as it was then, given the situation has actually worsened. We stand at the edge of an abyss of global extinctions and the ledge is crumbling beneath us...
All our own work, too.
Big finish bring all the elements that made The Green Death a classic of Whovian proportions together once again. Katy manning and Stuart Bevan are reuninted, if not both as the characters they played oh so long ago, the spirit of familiarity is at play to great effect.
Its touching and thought provoking and laugh out loud funny on occasions.
Although a little disgusting at times.
It was perhaps not the wisest choice on my part to be eating a hamburger luch as I listened to this. For reasons that will become apparent when you get a chance to listen to it yourself.
Nature, especially when it rebels, is not for the faint hearted...
Or the squeamish.
The Green Life is a joy. It brings closure to a classic era of doctor Who and perhaps signposts a whole new era. 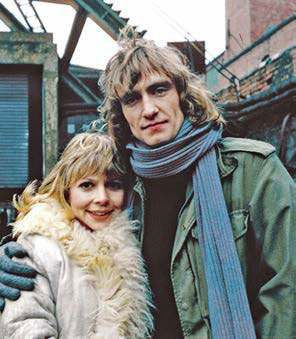