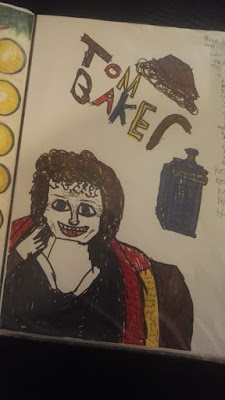 My nephew Ryan did this lovely drawing of tom Baker for me., He has asked me who my greatest hero was and I said The Fourth Doctor as played by the Liverpudlian actor Tom Baker. That is a no-brainer, off course. Which is also how a lot of people have described me, actually. A bit of Whovian serendipity or human tragedy? Which, oddly, is another way people have described me.
That, and also looking like a tree that has been struck by lightning.