Destiny Of The Daleks vinyl. 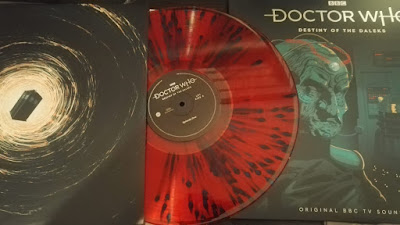 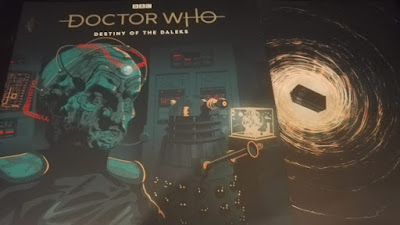 On World Record Day 2019 two pieces of Doctor Who vinyl were released. The Destiny Of The Daleks and Galaxy Four. A Baker and a Hartnell, two super treats for any Who fan. I managed to get the Destiny one and still hope to track down the other at some other time.
Oh what a cover. A head shot of the dreaded Kaled scientist Davros, genius and all round genocidal madman. It is a gate fold with two lovely inner sleeves. And just look at how striking the color of the vinyl is.
I am very fond of this story and think Lalla ward does a wonderful job of narrating the accompanying cast and sound effects. Sounds quite effortless on her part. Why, it is almost as though she were there. Regenrating into this form for the first time. On Skaro. Running about in a pink suit trailing a long white scarf. Feigning death in a Dalek Slave mine. Going head to head with Disco Death Bots The Movellans. Proving at every turn she could hold her own with or without The Doctor.
All of this season building towards a leisurely punt down a river in Cambridge past Magdalene College and under the Silver Street Bridge and a showdown on the Galifreyan prison planet of Shada, oh happy days...
Posted by Malachy Coney Curiouser and Curiouser at 02:00