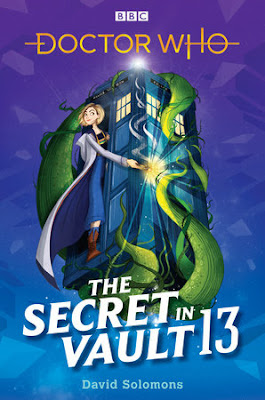 Well, this has to be, for me anyway, the most surprising Doctor who book I have read for some time. I came to the book , as a collector of Who related things, with the impression that since the book was aimed at younger readers and set in the most recent television iteration, it would be specifically aimed at the most casual of readers. And as such, it may not  have as much in it to recommend those readers who are longer in the tooth. which just goes to show how skewed such preconceptions can be. While it does not exclude more recent fans there is much to delight those who are more long term devotees of the television show we know to be the best ever on the box.
And also how easy it can sometimes be to overlook wee treasures that might be right in front of ones face.
For those who are more long running fans of Doctor Who one of the most striking differences between it and all that has gone before was the absence of continuity references, either to past series and sometimes even between on going episodes. It was surprising then to find so many in this wonderful book by David Solomons, it is blooming bursting with them (and I use the word "blooming" advisedly with regard to the way David Solomons uses the alien tech in his book, a notion of biomechanics that owe as much to the old 2000AD biogs or a more beautiful form of Giger's grown instrumentation.) yet these references in no way historically weigh down the narrative they in fact broaden it in a witty and entetaining way. at times I almost heard the voice of "the book" as it is known in Hitch hiker circles (universally wide ones..) as I read some of them.
Damn fine funny writing.
This would have made such a fantastic seasonal story. Christmas day, New Years Day, Saint Patrick's Day, Tom Bakers Birthday, whatever..
I really enjoyed this doctor Who book, from start to finish. it felt like a charming meandering fun epic, one that deserves to be read by a wide demographic beyond the usual Who fandom.
Its a proper adventure in space and time with the children's character adults adore.
And to think it all starts with a talking petunia...
Posted by Malachy Coney Curiouser and Curiouser at 06:26