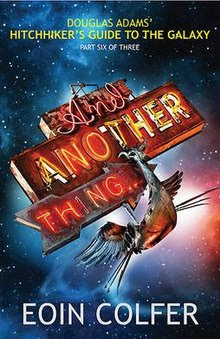 What a mad folly it must have seemed to dare to continue with series of books whose every aspect, every expression of singularity, is totally inseparable from the man who wrote them. Douglas Adams  mad universe which proved to be prophetic in a completely inaccurate way. Like only a proper fortune teller could have done. Anyone can be wrong. It takes gradations of genius to get things so wrong they almost seem plausible.That is were people like Douglas Adams come in. This very notion made me wonder if Irish writer Eoin Colfer might be too good to jemmy himself into the arrow niche of scientific savant and humorous storyteller or does he take himself as seriously as say Philip Pullman who seems to treat humor like the last caravan park at the end of the universe. I am pleased to say he is not, which in this case is all he needs to slip into a pair of Zaphod's cast of  silver moon boots (Which almost no one can wear with the necessary degree of aplomb.)
Most of the old familiar names and faces have come back for another extraordinary get together. Fate,destiny and bizarre experience has not taught them this is a situation best avoided if one longs for a quiet life. So hello once again to Arthur and Ford, Trillian and Zaphod Beedlebox once again. Writer Eoin Colfer is particularly good at tapping into the Zaphod in Zaphod. Oh yes, he puts the Beedle into Beedlebrox. There are also a number of unemployed Gods knocking around the edges of this story. One of the draw backs to being a God in this scenario being the fact they become diminished the moment they become an entry in that extraordinary book The Hitch Hikers Guide To The Universe.Certain professions require a degree of mystique and nothing diminishes mystique quite like flat notation for easy access.
Almost every adaption of Hitch Hikers Guide to The galaxy and its sequels have something in them that extends and cements Douglas Adams creations in the crowded jumble of the shared cultural zeitgeist. Now that notion extends to the work not written by the man himself although many probably, and quite reasonably, feel that the work should have come to an end with Douglas Adams departure from the stage. I think that while some people choose to believe that sacred cows must be left untouched I see no harm in taking them for a wee walk every now and then. If for no other reason than to prevent them becoming stiff and tired.
Some familiar aliens return also but then every one in a Hitch Hikers novel is an alien but there  is no need to panic (Ahem.) its nothing a well seasoned traveler cannot cope with. Just make sure you remember to bring your towel with you. 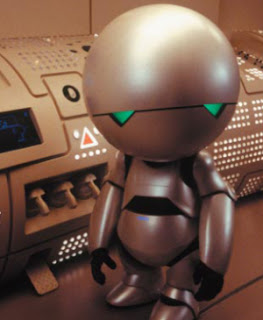 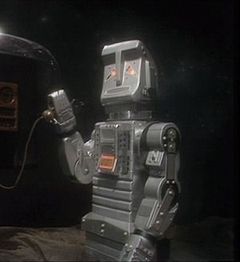 Neither of these iterations of Marvin
appear in Another Thing,
him being quite dead.
That is not a spoiler by the way, more
a fervent wish on Marvin's part.