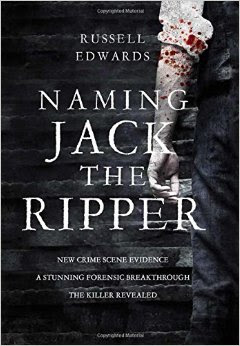 In 2007 a one hundred and twenty year old shawl of a very unusual suggested provenance was put up for auction and bought by an English business man named Russell Edwards. The shawl was said to have been the property of Catherine Eddowes, the Whitechapel murderers "canonical"  fourth victim (The designation by which the supposed five actual victims of Jack the Ripper are known by Ripperologists.) If true then this shawl was one of the only remaining actual items of evidence from the worlds most famous cold case. For the Ripper left nothing in his wake other than bodies.
This book is different from some of the other books I have recently read on the subject in that the writer writes in detail how his growing interest in the history of the crimes( after having seen the Hughes Bros. adaption of the graphic novel by Alan Moore From Hell with Johny Depp as Inspector Abberline.) saturated his life and became something of an obsession. He literally walked the walks and found out as much as he can. Then he bought the shawl.
The shawl was subjected to a series of forensic tests which has convinced its new owner of its provenance which some found questionable. From blood stains and related DNA he is also convinced he now knows the identity of the Ripper. It is a notion not so removed from Patricia Cornwell's attempt to address the identity of the fiend using modern police and forensic techniques. Although it has an altogether different outcome and conclusion. As with so many"conclusions" about the inconclusive events of that Autumn in 1888 it works for the length of the narrative.
My own problem with the idea lies with the shawl itself. It is quite a striking piece of clothing. Well to my antiquated eyes it is. As such I find it difficult to believe a woman of Catherine Eddowes then unfortunate standing would have owned that particular item. Look at the quality of the shawl, if it could even be called that or described as a shoulder drape for a poor woman without a pot to piss in. I am sure I read somewhere that Catherine had pawned the very shoes on her feet the day before she was murdered. All these poor women were literally that.As poor as it was possible to be. All the victims of this monster owned little more than what they stood up in. it is heart breaking to read what else they carried about their person and what amounted to their entire earthly possessions. A bit of broken mirror, a few buttons, maybe a thimble of sugar. These women were destitute, hopelessly bereft of even a minimum of worldly goods.
That she would hold onto a piece of material embroidered with Michaelmas daisies while letting go of the shoes on her feet stretches credulity for me.
To be fair to this theory though if there was one place and time where credulity was being stretched on a regular basis it was Whitechapel 1888. Where daily life was a nightmarish grind, One to weary the hardiest of souls.
Also the test results from the mitochondrial DNA show a veritable cascade of common maternal ancestry which throws the net wide in search of possible descendants. Narrowing it down to a single suspect is a bit like finding a wanted poster pinned to the chief suspect.
What do I know.I am no forensic expert. There is always a certain amount of trust involved in having such results explained to one. As with everything connected to this case it borders on almost anecdotal which I suppose is the opposite of forensic.
Has the Ripper been found?
He was never lost.
Forever hiding in plain sight. 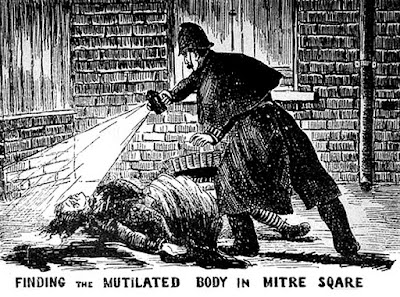