No High Church In The Wilde. 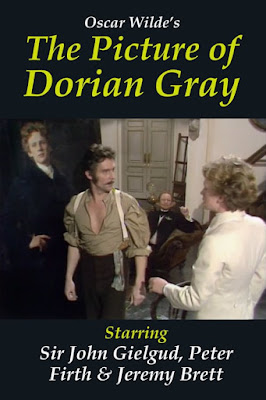 I finally managed to track down this BBC adaption (By playwright John Osborne.) of Wilde's vision of innocence corrupted and it quite probably the best version of the novel I have seen. It certainly boasts the best incarnation of Dorian Gray as portrayed by young Peter Firth, who is adept at exuding a wide eyed innocence of the "younger" Dorian and the calculating cruelty and indifference to suffering of the "older" Dorian. He really is a piece of work, the most confidant and complex portrayal of the character I remember seeing.
It has been long said by many that the BBC are at their very best when producing period or historical drama and this production just about ticks all the quality boxes in that regard. Everyone involved was on top of their game. John Gielgud effortlessly bringing to life the most salty of wilde's epigrams while Jeremy Brett wrings an unspoken anguish from his portrayal of the gifted but doomed Basil Halwood. In fact for a drama where rich dialogue flows there is much left unsaid, words unspoken, with the unquiet heartache hanging in the air around the various characters like the thickest, if invisible, but spiritually tangible of pea soupers. Dorian's hold over those in his company is the cause of much anguish. he is at times like a Thyphoid Mary figure who strides through a crowd of beaming admirers, who tumble like stricken reeds in his wake.
Peter Firth's performance as the angelic Dorian is whimsically endearing to begin with while his later turn as the wicked Dorian is hypnotically reptillian. The way he toys with the feelings of others is like watching a cat play with an injured mouse, inflicting spiteful pain before devouring, in all likelihood to spit it out. He is mesmerising.
And off course, getting back to that theatrical force of nature, John Geilgud delivers Wildean dialogue as though it were just occurring to him. He makes it feel so real which is off course an illusion.
A beautiful lie.
There is nothing so unnatural as a witty aphorism.
none are to be found in the wild. 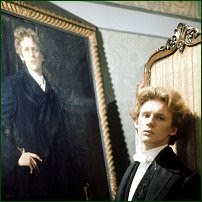