Sherlock Holmes And The Servants Of Hell. 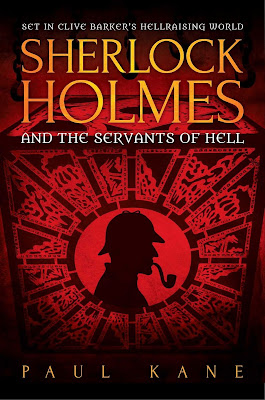 This is certainly one of the most extreme (in every sense of that words usage) additions to the extended Holmesian canon (Although I doubt that many of the Holmes Cannonites will tolerate the Cennobites for a second, much less consider them canon.) Conan Doyle's greatest creation meeting Clive Barkers most well known, both iconic notions from very different worlds. World wide you will find people who have never read a line by Conan Doyle yet know Sherlock Holmes and Watson as though they grew up in the posher end of the neighborhood. Equally you can find people who have never read anything by Clive Barker but who recognise Pinhead High Priest Of Hell, even if they cannot quite get the name correct; Nail Face, Tack Tack or even Nail Head.
It is true that readers and collectors of Sherlock Holmes and all things consulting detective-like love the notion of puzzles and their solutions. Just such a compulsion also exists at the very heart of the Cennobite mythos. Although in their case their solutions bring nothing but disaster upon the solver. Given this perhaps such an unusual cross over is not as unlikely as it sounds...
Nope.. actually it is. I am perhaps overcompensating because I enjoyed the book so much. Especially the first two thirds of the book before it escalates, or should I say degenerates to a War In Hell ( I use the word degenerate in a repulsively playful manner, by virtue of where it ends up things have to get oh so much worse before they get..even more worse.) The scale of the book becomes quite epic in scope, so much more epic than say the scale of the Holmes short stories. It has to be pointed out though the gory quality of some of the events does not always sit comfortably with the Holmes and Watson we know. Imagine Holmes and Watson waking up aboard the Nostromo and finding themselves being pursued by a Xenomorph through maintenance ducts or using flame throwers, it just feels so off at times. Yet perversely, in every sense of the word, it is this very aspect which so appeals to Clive Barker readers. in a strange way the novel mirrors the progress of the Hellraiser movies and their reinvention of Cennobite lore as they went along. There was also the notion of the very real sexual repression of the Victorian era and the growth of the Decadence movement towards the end of that period. Human sexuality is wont to blossom in myriad forms when under the pressure of a heartless thumb or boot. Fetishism and decadence bloom by the light of strange moons, so to speak. There were societies and special clubs that catered to all manner of tastes, then and now. one merely required the material wealth and an invitation to partake. In the instance of The Cennobites it was the puzzle box which served as the invitation to the court of the hell priests,The Order Of The Gash, although as Pin Head himself once gothically intoned it is all about the player not the game.
To have Holmes and Watson as prime movers in a War In Hell may seem to some a bit like having Ms Marple leading armies of men and elves in Middle Earth but to a large degree Paul Kane pulls it off. Mostly down to his umbrella knowledge of both franchises. From events in Holmes movies such as Young Sherlock right through to the Indiana Holmes advs (The Robert Downey Jnr Holmes movies.) to the various lurid chapters in the Hellraiser saga. In the end the whole novel involves a descent into hell which no one escapes without scars.
War is hell with war in Hell being the very worst.